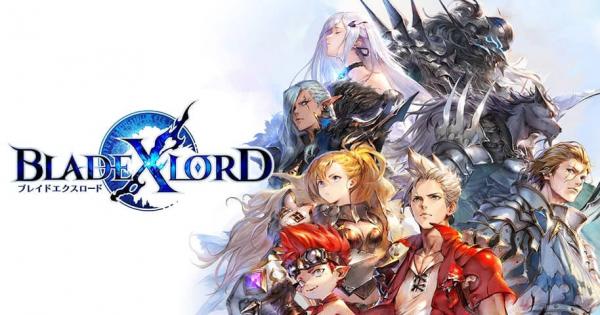 In this Post Mortem Review of Blade XLord, I go over

- The Good, Not-So-Good, and the Ugly of the game.

- Why you might not have heard of Blade XLord

- Who is Applibot and why you should care.

What does it take to sell someone on a mobile game nowadays?  The first step is having a strong hook.  Advertising their team of veteran developers who've worked on titles like Final Fantasy Brave Exvius, Last Cloudia, Final Fantasy VII, Chrono Trigger, Star Ocean, and more Applibot's proud title Blade XLord (BXL) seemed like a lock for the mobile JRPG market.

Despite promising devs, it was recently announced that BXL will be ceasing Global service on September 30th, 2020, 4 months after launch.  The obvious question is "What went wrong," but even more pressing is that Applibot is the developer of the next highly anticipated title: NieR Reincarnation.  In this $720 Post Mortem of Blade XLord we will look at the game and end with what we might be able to expect next from Applibot.

NOTE: The following opinions are solely those of the author and do not necessarily reflect those of GamePress as a whole.

My favorite unit in game, showcasing the excellent character designs and art.  Her Brave Skill, Super Sad Supreme, is a mood.

Blade XLord is an active skill-based combat JRPG from developer/publisher Applibot.  Although it tries to break the glut of turn-based JRPG's on the mobile market, it's developer pedigree shows through in delivering one of the most nostalgic feeling PSX Era JRPG experiences through beautifully animated cutscenes and pre-rendered, voiced, videos.

Combat in Blade XLord is real-time skill based, with the character able to circle around one enemy at a time.  Some skills give bonuses to striking certain areas of the enemy.

As mentioned earlier, the arguable true selling point of Blade XLord is its graphics.  Impressive character designs and animated cutscenes really push the polygons on a mobile title.  The beginning animation is well done and feels almost console quality.  The amount of effort spent is genuine, and shines through the scenes and most story-based experiences.

Despite the standard mobile game systems where the levels are selected on a menu, every story stage and some events have animated cutscenes.  Combined with the strong art and atmospheric music, BXL really sells the classic JRPG experience.  When I revisited the game recently, the UI felt a lot more responsive than I remembered.

Interestingly, all characters share the same rarity.  The rarity distinction comes from weapons, ranging from B to SSR with corresponding power levels and abilities.  Gacha rates are 6% for an SSR unit and 4% for an SSR weapon, which are better high rarity rates than most other games, although they share a pool with weapons.

The graphics really are excellent for a mobile game.

Rate up was 1.2% for a solo rateup unit, and .7% for a solo rateup weapon.  Many banners were multi-focus despite a new char rateup, and the strongest team synergies were geared towards mono-element teams, compounding the issue of specific summoning.  There were some obvious character disparities based on skillsets and skewing towards classes, typically favoring offense at least early game.  Locking characters to a 6% pull straight up makes it difficult to field a workable team at all at times.

Combat was divisive.  While the active combat does offer a lot more interactivity compared to standard turn-based RPG combat, the controls were unintuitive at times and frustrating at others.  While circling around an enemy was simple enough, strategically switching enemies was imprecise.  I do appreciate the attempt at going beyond the easy route.

Many players reported textual glitches during the cutscenes, in addition to menus freezing as well.  Some of the UI options were somewhat unintuitive to beginners at first, such as the option to "view" units being under the upgrade tab.

My feel when something goes wrong in-game.

Reception to the recommended grinding method of having the phone plugged in and running autobattle at 1x speed overnight was abysmal.  Especially when manually clearing a stage optimally will take at least a few minutes, Blade XLord's lack of skipping, 2x speed, ability to run in the background, or any other farming QoL outside of "energy saving mode" burned out many players who felt that the game "did not respect their time."

BXL also kept the standard JRPG grinding system by gating content behind power walls.  Naturally, this requires farming to strengthen your characters, but only made the experience worse when combined with the slow combat.  Making players weigh between using their phone and powering up ends up frustrating busy people and boring hardcore grinders.

The fact that they advertised it as a "feature" using their cute mascot unfortunately didn't help.

What does whaling get you?  I was given 30,000 Diamonds (worth $720/300 rolls) to review the game and find out.  There are lots of Guarantee SSR Character/Weapon banners and they constantly added more.  While this makes filling rosters slightly easier, it also requires spending cash since they aren't rollable with the free currency.  Additionally, the low/multi focus rates meant I ended up getting spooked and somehow duped more often than not with offbanner units.  There were "pity medals" gained from rolling, which could guarantee a rateup on an active banner, which does help unlucky whale snipers.  I also didn't recall any particular value packs that would appeal to dolphins.  However, value is subjective - the high SSR rate was exciting, and although I didn't get who I wanted (I just wanted Heathbell...) I was able to assemble a large roster.

However, like dolphins and F2Plankton, whales are subject to the standard flow of time until we invent lightspeed travel.  While the lack of paid acceleration does make it slightly less pay-to-win, there are undoubtedly people who would pay for QoL.  This is a touchy subject, but in some ways I am glad that they did not choose to go this route.

Why Haven't I Heard of Blade XLord?

Starting off is tough when you're an original IP, which puts all the more emphasis on a strong advertising campaign. For BXL Global there was a noticeable lack of publicity.  In terms of advertising, they checked off all their social media outlets, including the twitter that tried so hard.  However, there didn't seem to be as many traditional advertisements, such as Facebook or Youtube.  As a result, the EN hype machine didn't even get to start.  Investing in EN community outreach through streamers and a good Community Manager would help fast-track adoption and word-of-mouth, while releasing consistent trailers would get people invested in the excellent production values.

Instead, the only promotional materials I received focused on their veteran dev team.  To their credit, it is the strongest hook, but they also had an excellent soundtrack and cutscenes I never would've known about had I not checked out the game.  In addition to excellent devs they had excellent production values that weren't promoted at all when they should be advertising about as many good things as possible.  They did rerelease their PV for an EN audience, and I swear they had a Youtube channel, but I can no longer find it.  Unfortunately the PV released was the announcement trailer from the Tokyo Gameshow with Japanese subtitles removed, instead of a new PV cut to focus on the animations and gameplay.  At least they got the right advertising points on their site, albeit under the confusing "System" section instead of the front page.

Prior to NieR Reincarnation and BladeXLord, Applibot didn't seem to have much of an EN presence.  A quick look at their website reveals that Digital Advertising company CyberAgent is their 100% shareholder.  Sound familiar?  CyGames is perhaps the most well known CyberAgent subsidiary for mobile gamers, making Applibot their sister subsidiary.  Interestingly, many Applibot administrators are also on the CyberAgent Board of Directors, as well as sharing Executive Management.  Theoretically, we can expect a lot more direct involvement from CyberAgent, as well as their ability to leverage corporate connections.

Many of the devs on Blade XLord being veterans from Square Enix titles suggests at least a preliminary connection to the JRPG giant for its development.  Given that Nier Reincarnation is an actual Square Enix title, it seems that they've strengthened their relationship and hopefully can provide the resources to make the game meet expectations.  At the very least, they seem to be leveraging their graphical capabilities for NieR: Reincarnation, although the combat system does look similar to BXL so far.  With the experience from BXL, hopefully they can create the next generation of "true" JRPG mobage.

Overall, I enjoyed the art direction and music of the game immensely.  Revisiting it just filled me with regret at the fleeting potential.  Had they just fixed farming, the game might have fared better.  However, in my opinion, if they instead made it a full mobile JRPG like it seemed like it wanted to be, they could have disrupted the mobile game market.  An AA full JRPG game that really hits the classic PSX era notes is something many would welcome, albeit not potentially as profitable.