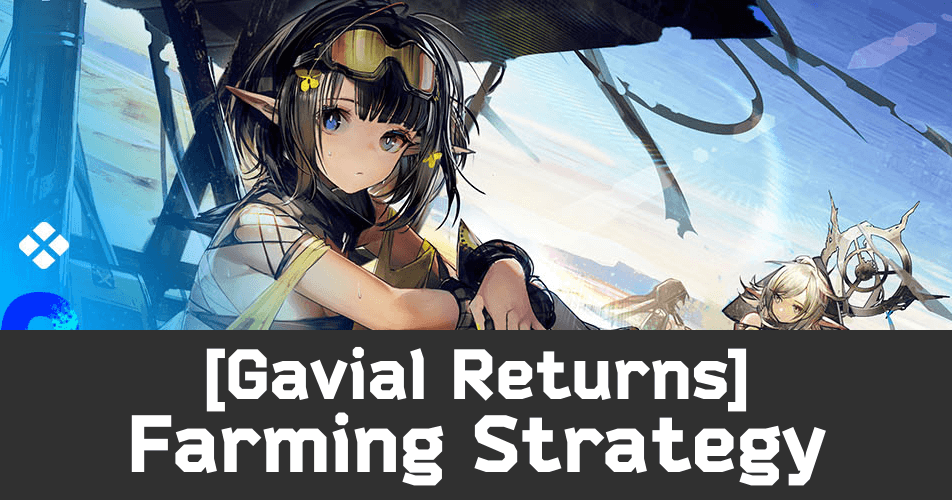 With the current hype surrounding the rogue-like mode, Gavial's event might feel neglected. However, Gavial's event comes with a few farming stages, and I'd like to explain which stage/s you should be farming and why.

Because this next event doesn't have a unique abbreviation, I'll be referring to it as the Gavial event for short, instead of RI. Thanks to u/eonfeather on Reddit, RI in this context probably stands for Rage Ironhide, instead of Rhodes Island like you may initially expect. Without further ado, here's my analysis for the farming stages of the Gavial event.

RI-6, RI-7, and RI-8 would seem like good farming spots for Orirock, Sugar, and RMA, respectively, but which stage would be the best choice given what we know about efficiencies and CN's schedule?

Comparing the Gavial Event with Other Stages

As usual, I'll be taking efficiency values of stages from Moe's spreadsheet, and the Data Sheet tab will be referenced more than usual in this particular post. Based on the values in that spreadsheet, RI-8 seems to be the best choice based on efficiency values alone. We can take a more in-depth look at what we know to verify if that's true or not.

Note: Moe's spreadsheet does say indicate that RI-8 has better efficiency than RI-7, while Mousse's spreadsheet indicates the opposite. This is because Moe's spreadsheet accounts for passive EXP generation in the base, which decreases the value of EXP dropped from stages (like 4-2 which used to be preferred for Sugar farming).

RI-6 seems to be out of the question, despite having the lowest Sanity required per Orirock, even when compared with 1-7. I'll get back to that in a later section. On the other hand, RI-7 and RI-8 differ in efficiency by less than one percent. Comparing this event with others will lead to a clearer distinction between RI-7 and RI-8. ("...but what about rocks?")

Comparing the Gavial Event and Other Events

On my last post, I mentioned that it was a good idea to stock up on Sugar to take advantage of DM's three-week period. If you spent your time farming DM-6 for several days, it's quite likely that you still have a substantial amount of Sugar leftover, as do I. In the future, MB-6 has a slightly lower Sanity needed per Sugar, and with the possibility of MB-6 lasting only 24 seconds, MB-6 feels like a better choice overall if you wish to farm Sugar from events. ("...but rocks...")

(Counterargument: "Why would you farm MB-6 over MB-7 and MB-8 anyway?") MB-6 is simply the best alternative to RI-6 in the future. Even if you don't farm MB-6, you save more Sanity from permanent stages by farming RI-8 over RI-7 for RMA and Sugar, respectively, since that's what the efficiency values indicate.

On the other hand, no other stage comes close to RI-8's RMA drop-rate. BH-8 from Archetto's event offers RMA, but based on efficiency calculations I've done using Moe's sanity values for materials (on the Appendix table of the Calculation Methods tab), BH-8's efficiency is 0.993865. In other words, 4-9 seems to be more efficient than BH-8*. Based on CN's current schedule, RI-8 is the best source of RMA for the foreseeable future. Thus, RI-8 should definitely be prioritized. ("...but rocks...")

*Note: BH-8 was released after Chapter 8 on CN, and it's possible that Sanity values may adjust and BH-8 would seem like a decent option.

Arknights: [Darknights' Memoir] Farming Strategy. What Should You Farm?

Should (Can) I Farm Rocks?

If you wish to pursue maximum efficiency in farming, then you definitely shouldn't farm RI-6. However, there are a couple of reasons why you might consider RI-6 as a farming spot:

Here are counterarguments for the 2 points above:

If you currently don't value EXP, I highly suggest that you think things over once more. Choosing to E2 max a 6-star takes an absurd amount of EXP and LMD, as seen in this Reddit post. If you currently don't have any E2 max Operators but wish to have some in the future, then 1-7 would be better than RI-6 for Orirock farming.

And speaking of the anniversary, Chapter 8's release does offer an event similar to what we had on the anniversary, so if you ever want to stock up on Orirock in a future event, then the Chapter 8 release would be your best choice in the interest of maximum efficiency, not RI-6.

All that considered, RI-8 is definitely the best stage to farm for this event. If you stocked up on Sugar during DM and Orirock during the anniversary event, then there shouldn't be a large immediate need for either material currently.

My advice would be to spend all 2 weeks of the Gavial event farming RI-8, since that's the best place to stock up on RMA for the foreseeable future. RI-7 and RI-6 shouldn't be done past the first clear, unless you didn't farm either Sugar or Orirock from DM or the anniversary event.

I'm welcome to suggestions if you think I should change anything, and please tell me if I made any mistakes somewhere here.

Finally, don't forget to have fun with the rogue-like event!

I spend way too much time on Reddit; you can find me hanging around the r/arknights Q&A thread usually!