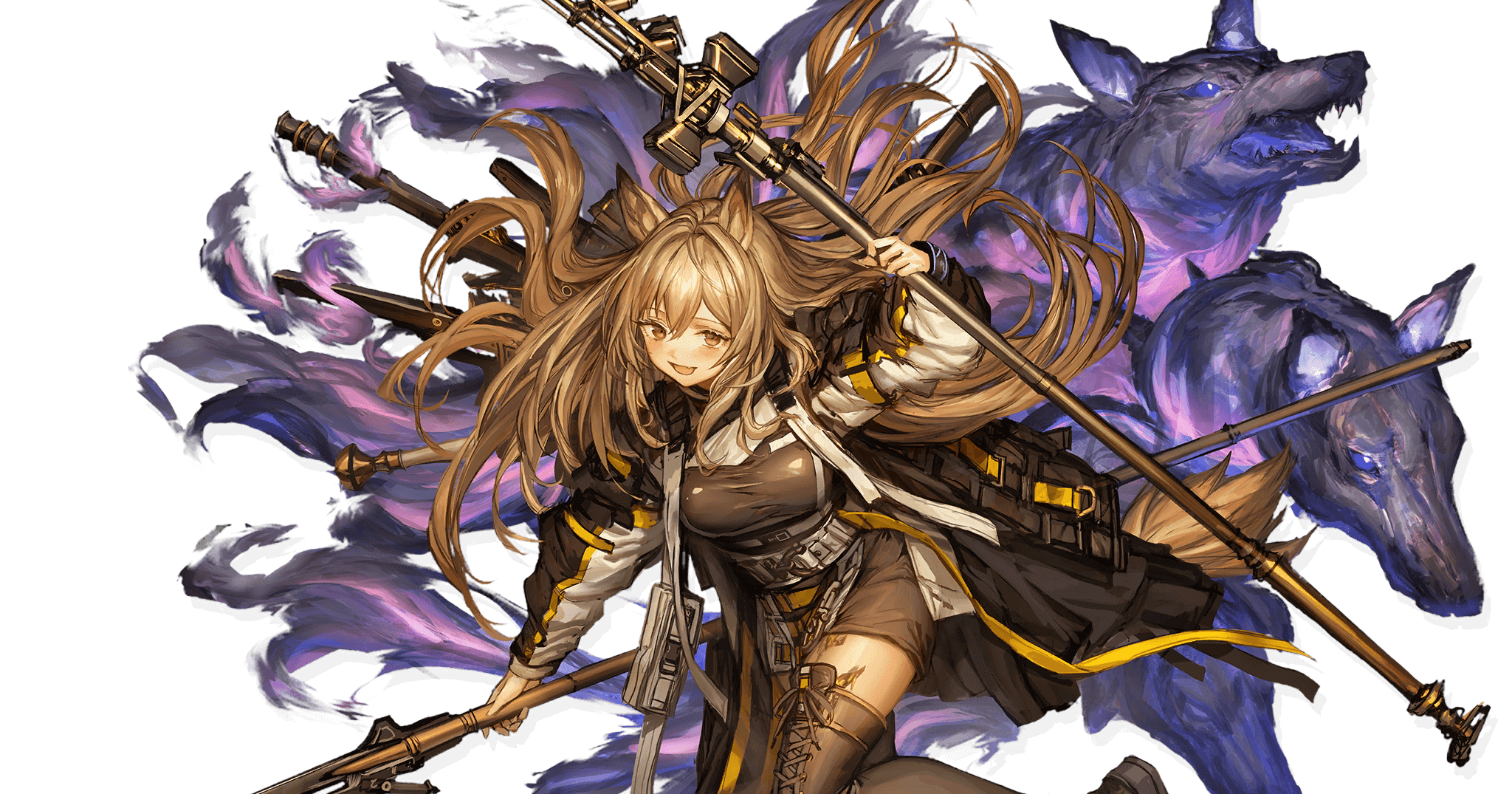 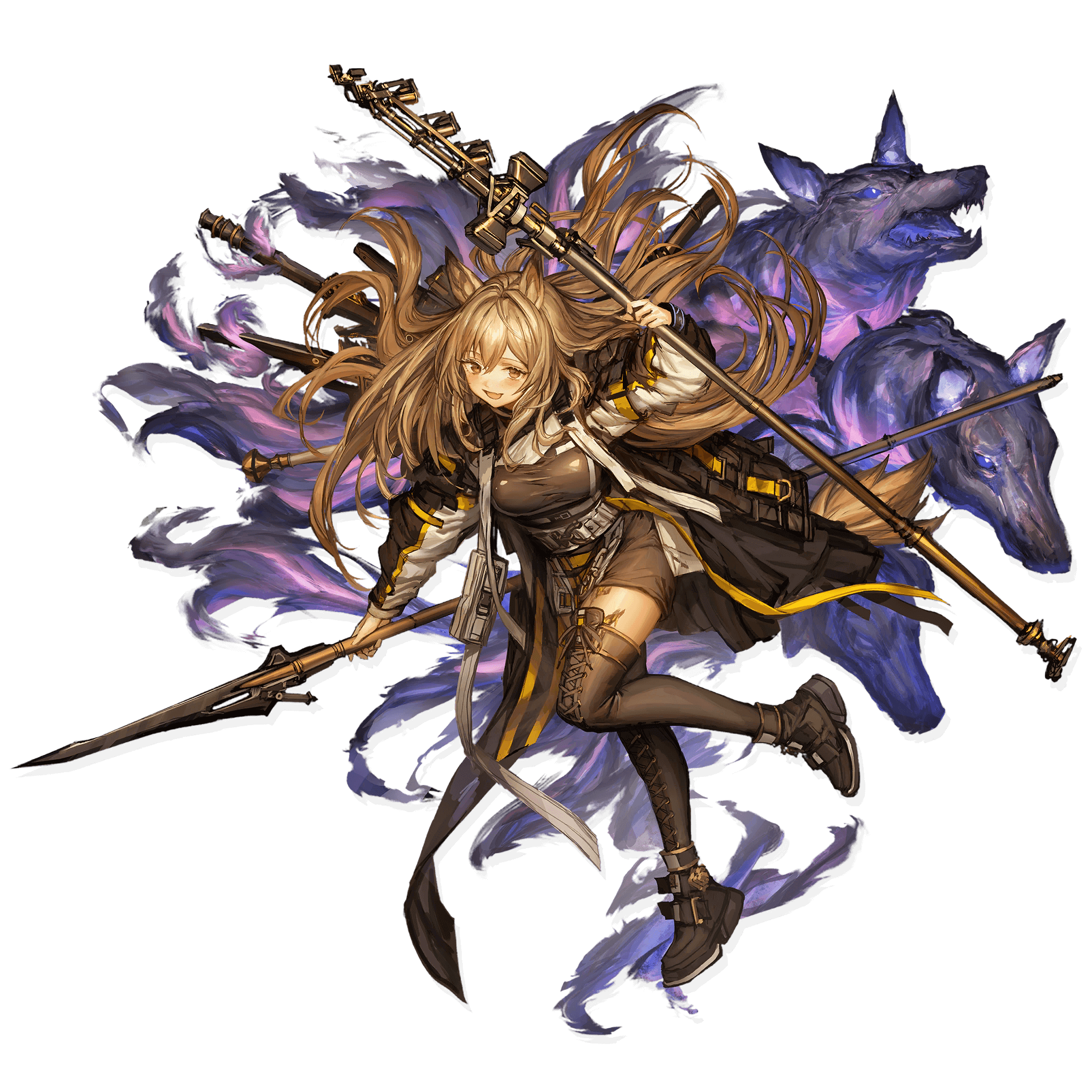 The three-headed dog in Ceobe’s Elite 2 art brings to mind one of the most famous mythological creatures as her prototype: The Cerberus. Although there are other mythological guard dogs like Garmr or Shavara who are thought to come from the same protomyth, Ceobe’s in-game designation of “Cerber” confirms her prototype as the one and only Cerberus. 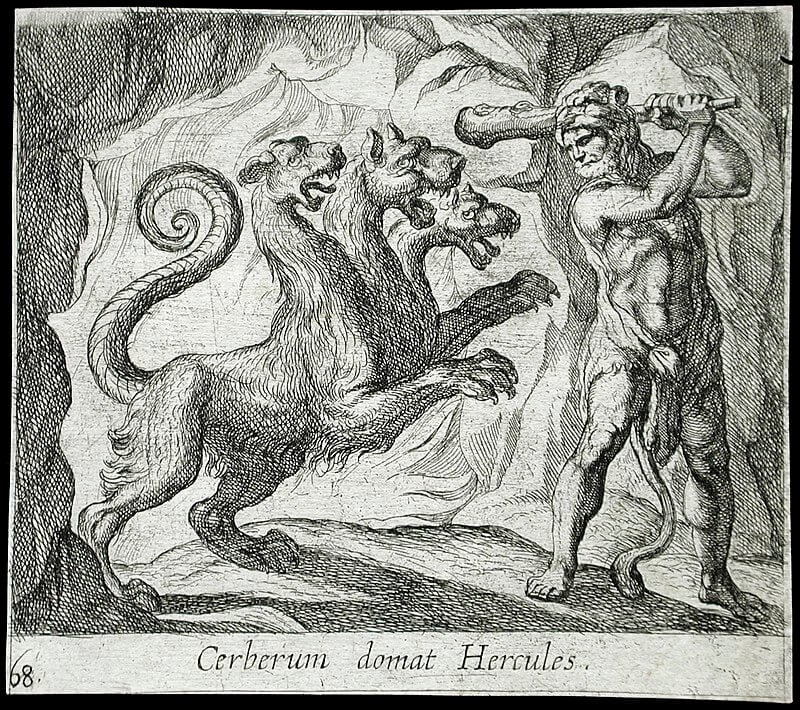 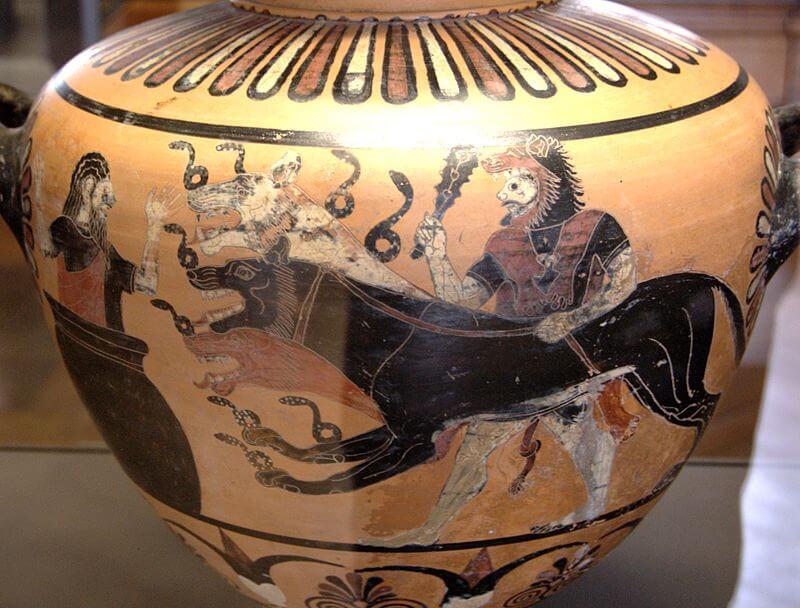 In Greek mythology, Cerberus, (commonly referred to by the epithet “The Hound of Hades”), is a multi-headed dog that guards the gates of the Underworld to prevent the dead from leaving. He was the offspring of the monsters Echidna and Typhon, and was usually described as having three heads, with some accounts including a serpent/dragon tail, and snakes protruding from multiple parts of his body. Cerberus is primarily known for his capture by Heracles, as the final of Heracles' twelve labours. This was a one-on-one weaponless deathmatch where Heracles had to subdue Cerberus with nothing but brute strength. But to be fair Heracles is also a demi-god, and Cerberus might have been under the weather that day, and…

Although descriptions of Cerberus’ headcount varies, multi-headedness seems to be a consistent family trait. His father was the serpentine giant Typhon, depicted as having one hundred snake heads. Notable siblings include the multi-snake-headed Lernaean Hydra; Orthrus, the two-headed dog who guarded the Cattle of Geryon; and the mythological Chimera, who had three heads: that of a lion, a goat, and a snake.

In the earliest description of Cerberus in Hesiod's Theogony (c. 8th – 7th century BC) depicts Cerberus with fifty heads, while Pindar (c. 522 – c. 443 BC) describes him as having one hundred heads. However, later writers almost universally depict Cerberus as having three heads, with the exception of Latin poet Horace's Cerberus which has a single dog head, and one hundred snake heads.

Perhaps trying to reconcile these competing traditions, Apollodorus's Cerberus has three dog heads and the heads of "all sorts of snakes" along his back, while the Byzantine poet John Tzetzes (who probably based his account on Apollodorus) gives Cerberus fifty heads, three of which were dog heads, the rest being the "heads of other beasts of all sorts".

Some speculate Cerberus’ eventual mythological convergence was due to the ease of illustrations. Despite descriptions of Cerberus having more heads, illustrators may have simplified it down to three heads as a representation of being many-headed. This artistic liberty spread over time, with decreasing emphasis on the snakes to become the modern cultural canonization of our favorite three-headed guard dog today.

In relation to Arknights, the mythological trait of Cerberus’ many heads manifests itself as Ceobe’s numerous weapons instead.

The name of the headhunting banner, Thousand Headed Arsenal (or Thousand Heads on CN) adds credence to this theory. If one considers a dog’s bite to be it’s main weapon, then this reflects Ceobe’s arsenal excellently.

Stories of Afternoon shows us the etymology of Ceobe’s name when Vulcan reads the ancient script engraved on Ceobe’s weapons. If the Minos use Greek letters as the basis for their alphabet, then “C O B” on Ceobe’s axe should be read “K O B”.

But where do we get “O” from? Cerberus' name in Greek is Κέρβερος (kerberos). One theory is that despite Ceobe’s meticulous maintenance on her weapons, there is a chance it might get eroded over time. The K (kappa for K) and β (beta for B) have unique forms and thus would stay legible, but if the letter, ρ (rho for R) were to lose it’s line on the bottom, it could read as an “o” instead. And thus we get K o β, Ceobe. Cool.

Although Ceobe has a collection of weapons from across Terra (imagine the cross cultural possibilities!), the color scheme suggests many of them are made of a bronze alloy, a common working metal of the Ancient Greeks. Her spear is likely a Doru (Dory), a long spear with a leaf-shaped tip. Although it’s typically used in melee combat for its ranged advantage and distinct from a javelin, it could still be thrown, which Ceobe gleefully does as its primary function. Next, Greek Soldiers typically had a short sword called a xiphos as a backup for their doru, which appears to be reflected in the knives that Ceobe uses. Again, they’re supposed to be used in melee combat, but we all know how Ceobe uses them. There just might be a pattern here…

Which brings us to perhaps her most interesting weapon, the axe. While her spear might be the most visually iconic weapon and her knives best-in-game, Ceobe’s Axe does the heavy lifting on her lore as her first weapon and name-tag. While it is a curiosity in that it appears to be based on a modern tomahawk (which are actually meant to be thrown for once), the Ancient Greeks, specifically Minoans, did have a double-sided battle axe called a “Labrys.” Sound familiar? Many scholars believe that the word Labyrinth was derived from “Labrys”, “The house of the double axe”.

The fact that Ceobe’s first weapon was her Ancient Minoan-engraved axe leaves many unexplored implications for her origins. She came from Bolivar, but managed to make her way to the East before turning back on the way to Minos. Given her exceptional endurance and unspecified period of travel time, there is a lot of potential lore to be revealed by future events.

Bonus: Ceobe’s profile has many references to the number 3 due to her prototype being the three-headed Cerberus. Her birthday is 3/3, her height of 153 cm is a multiple of 3, and her combat experience is three years.

From Ceobe’s Archives 2, we know that her favourite food is honey cakes/biscuits.

Although she has indulged in many foods of all shapes and sizes since coming to Rhodes Island, if asked to pick out the food she loved the most, she would choose honey biscuits. As a matter of fact, honey biscuits are the only thing that she seems to be picky with - currently, she only accepts biscuits baked by Lava, Vulcan, and Matterhorn. She won't touch even a single crumb of the biscuits baked by anyone else - even by the logistics chief.

Summary: She won't eat, but she absolutely can eat just about everything. She loves honey biscuits. If the day comes where she's in the mood to eat the entirety of Rhodes Island, she'll likely do just that.

The drop for Ceobe’s Fungimist event is also Honey Cakes.

This honey cake is the favourite food of the mythological Cerberus.

According to ancient Greek tradition, honey cakes are placed in coffins of the deceased. Similar to paying Charon’s boat fare, the honey cakes are the “fee” for the Cerberus.

Cerberus' job was to make sure the dead stay within the gates and the living stay away from them, with only a few heroes ever escaping his guard. However, the Greeks did note in their myths that Cerberus was a fan of sweet things like honey cakes and music, and these were used as non-violent methods to pass him for those without herculean strength; the great musician Orpheus charmed Cerberus with his lyre, and both the beautiful maiden Psyche and the Trojan prince Aeneas were able to pacify Cerberus with a honey cake and thus continue their journey through the underworld.

The specific type of “mythological” honey cake is open to a broad variety of interpretation. The pictured honey cake appears to be a pastry similar to baklava, a dessert consisting of flaky pastry dough with chopped walnuts and honey filling. However, it’s origin is debated between the Greek and Turkish.

Searching for “Greek Honey Cakes” results in a baked good consisting of honey and wheat flour as the primary ingredients, with modern day leavening agents I’m pretty sure didn’t exist in ancient Greek times. Although wheat flour did exist, most breads were made from barley instead. Thus, it’s a reasonable approximation that mythological honey cakes were made from a mixture of coarse-ground barley, honey, and olive oil. Romans apparently had a similar recipe for an unleavened honey cake consisting of such ingredients as well, lending credence to the theory of a dense, puck-like cracker biscuit being the mythological honey cake.

The Ancient Greeks had other foods that could be considered honey cakes as well. Foods made with flour and honey would lead to options like Tiganites, one of the earlier recorded results of pancakes, or Gastrin, a pastry with walnuts considered a potential precursor to baklava. In conclusion, there’s a world of honey cakes for Ceobe to enjoy.

Have fun collecting the honey cakes!

Ceobe wakes up to her friends and forgets about everything that happened in Fungimist.

Analysis: Everything that happens and collected is in her subconscious, and perhaps the memory of the Originium. The battles are connected to reality. When she wakes up from this dream, it is forgotten.

Almost the same as Ending 1, except that Ceobe has a bag of honey cakes that is clearly a projection from the dream. For there is no way this can appear in reality due to the circumstances in Sargon.

There are two possibilities:

1: There is another world in the mist and Ceobe brings back things to the real world.

2: The Terra we know is just a projection of another world. One may think about Kal’tsit said to Skadi in HX-6 story: ‘You and your kind makes me laugh. I do not rely on any spare part to put together the full picture of the land.’ (the official EN script cuts off like half by writing: ‘What a farce. I don't need any of these... components... to form the full picture.’) This may imply that the real world behind, is what is called ‘the full picture of the world, the truth of this land’.

Ceobe becomes part of the land in her dream and meets a great beast. She does not wake up in the "real" world. 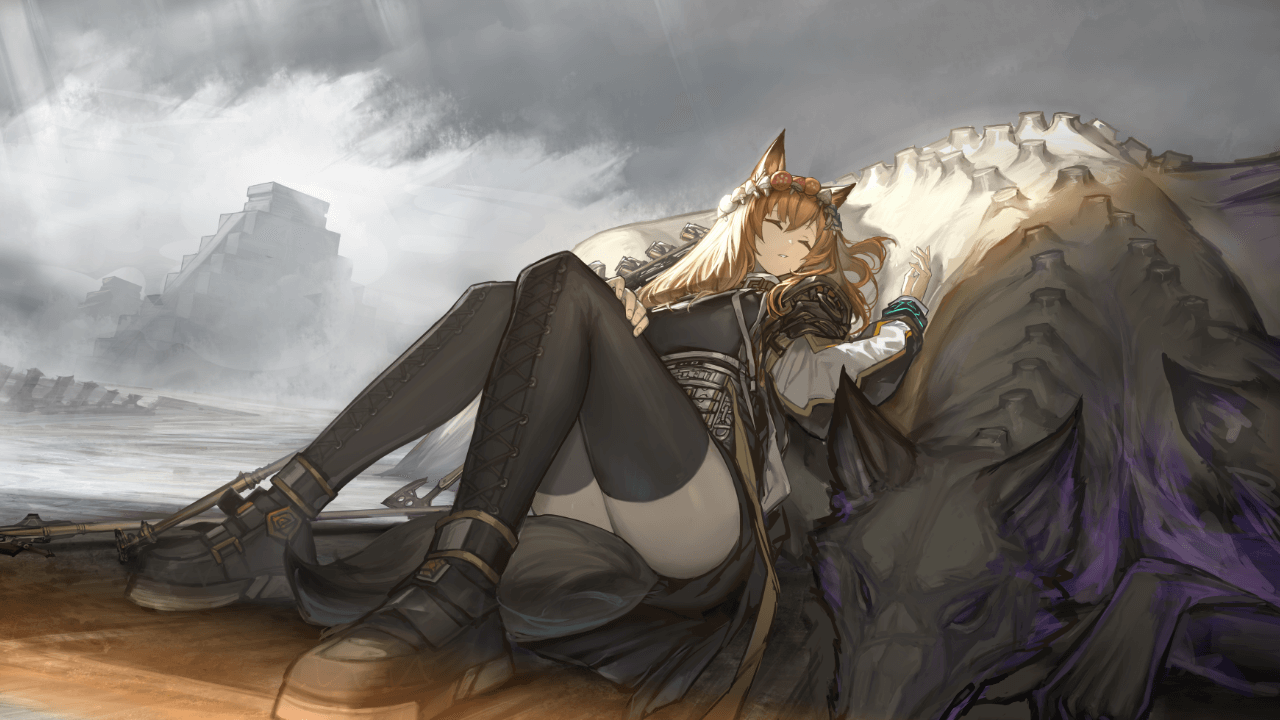 This hound clearly has three heads. Ceobe feels a bond with it, as if it’s of her bloodline.

From the speculation of the second ending, this huge three headed hound is the real Ceobe and this land in the dream is the real world, so she has ‘went home’. As the script says ‘leaving the land of falsehood and hypocrisy behind on the field of reason’, the land of falsehood refers to Terra. It is just the surface where people know. Ceobe has crossed through the falsity and saw the real thing. She turns to her roots as she leans on the beast, embraces reality and lives on this land forever. If this is the case, then everyone we meet are just projections from the real world on Terra. What Kal’tsit does not know, Doctor’s amnesia, the memory of the Originium, the loss of the Aegir, might originate from the real world.

Setsura Hisame
Wanting winter yet live in a land without it. Mood.