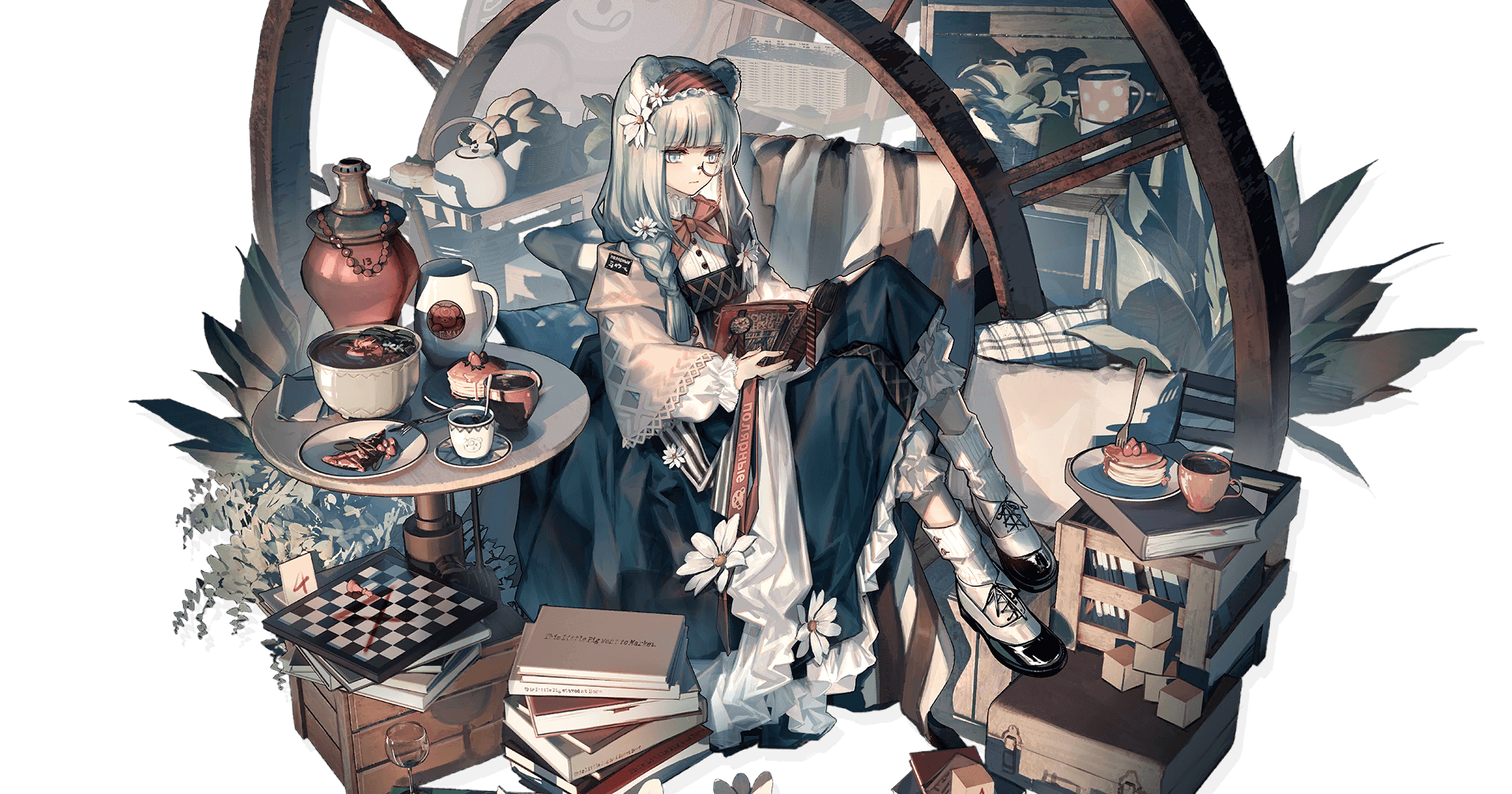 Skade is well known for her incredibly detailed skin art for operators as seen with Nightingale’s Elegy skin and Specter’s Undercurrent skin, and I thought I’d do a little write-up on the numerous cleverly hidden references in Istina’s Bibliosmia skin.

Through her voice lines and trust files, it is clear that Istina is a massive bookworm, as she displays a great interest in the books in the Doctor’s office and frequently reads there. She enjoys topics such as Arts, detective literature, sociology, politics, economics, dialectical materialism, and fashion, and also reads magazines on making snacks.

This outfit is heavily inspired by the traditional Russian dress, called a Sarafan, which is no surprise as it is generally accepted that Ursus is the Terra equivalent of Russia. 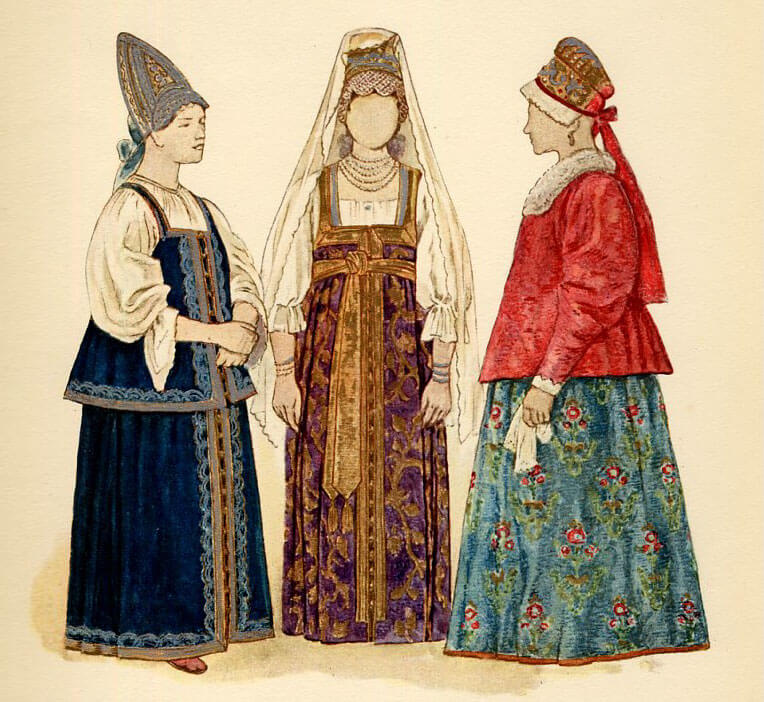 Bibliosmia (n) - The smell and aroma of a good book.

Skin description: After being re-coordinated to reflect the national outfits of the people of Ursus, Istina wore this outfit to promote traditional cuisine at the food festival. Countless details are engrained under the simple materials, awaiting people who believe they are clever enough to seek out the truth. (TN: the Chinese word here actually means "answers" but I think "truth" is more befitting and incidentally, Istina's name Истина means truth) There are many types of fun in the world, but only books and food are compatible with each other.

From the event, she's even kind of friends with May, who is very into detective things.

Agatha Christie is a British writer, so it matches the particular kind of Victorian novels that Istina likes to read.

This is not only an obvious reference to the nursery rhyme This Little Piggy but also a reference to Agatha Christie’s detective novel “Five Little Pigs”, also known as “Murder in Retrospect”, in which the 5 main suspects in a murder case each tell their version of the event, albeit 16 years later. This leaves a lot of room for the reader to piece together clues and potentially solve the mystery themselves, another nod to the skin’s description. The victim was a painter who loved his alcohol, which links to the brush used to write the number 5 on the tag, and potentially the wine glass. Furthermore, the chapters 6-10 of the novel are titled using the exact same lines of the nursery rhyme as quoted above, referring to the 5 prime suspects; an extroverted stockbroker (went to the market), a reclusive former amateur herbalist (stayed at home), a spoiled upper-class lady (had roast beef), a middle-class governess (had none), and a physically disfigured archaeologist (cried all the way home).

This also strongly hints at a correlation to the Ursus Student Self-Governing Group, comprised of extroverted leader Zima (went to the market), introvert Istina (stayed at home), chef Gummy (had roast beef). The other 2 could refer to any of the remaining 5 members of the Ursus faction; Beehunter, Absinthe, Rosa, Vika, and Summer.

This warrants a brief summary of the Ursus event, how the Chernobog incident affected each of the Ursus girls, and how the above titles correspond to them. When Reunion invaded the city, led by Mephisto, many students from different places were brought to Zima’s school (not all the girls were from the same school) and held as hostages for over 10 days. There were 2 groups of students; the civilians led by Zima, and the aristocrats led by Rosa.

A fire broke out in one of the food storerooms (likely by Mephisto), so in order to feed the civilian students, Gummy, as chef of the group, was forced to cook their only source of raw meat; the corpses of dead students. This explains her difficulty in controlling the strength of her 3rd hit, pointed out by Dur-nar during defender training, which is a technique to cut bone on the 3rd chop.

Vika was Istina’s best friend and a traitor, planning to defect to the aristocrats’ group. Istina discovered this, keeping with the heavy detective references in the story and the skin art. She let Vika fall to her death, and the guilt still haunts her to this day, as seen by her keeping Vika’s teddy bear, but she puts on a façade pretending she’s fine in front of the others, almost believing in her own lie.

The group of traitors were planning on attacking Zima, so she believed she had no choice but to kill them in order to protect the others. However, this strong sense of responsibility has resulted in her suffering from PTSD to this day and countless nightmares about whether she did the right thing.

I believe Rosa could be the “pig who had none”. After the destruction of the aristocrats by the second fire (accidentally ignited by Zima) and she is rescued by the Ursus group, she realizes that she does not hold as much dignity and kindness as she believed. She willingly chose to let the aristocrats rob the civilians for food/resources, which makes her feel extremely guilty, and leads to her developing PTSD and suicidal tendencies. Thus, she has lost both the value tied to her former title as a “noble aristocrat” and her mental stability.

The next few references are not as in-depth relating to the in-game lore of the Ursus girls, but are still unbelievably ingenious Easter eggs, nonetheless.

These seemingly innocent-looking decorations are a reference to "The A.B.C. Murders", another detective novel by Agatha Christie, in which the murderer goes by the pseudonym “A.B.C.”. The number 3 is particularly significant in the novel: 3 letters, 3 places, 3 murders, 3 bodies.

Another Agatha Christie reference. Her novel “The Big Four” has a cover which features an almost identical chessboard. The number 4 written on the chessboard could be read as XI, the Greek numeral for 11. This ties in neatly with chapter 11 of the novel, titled “The Chess Problem”.

Together with the food on the table, the number 13 likely refers to another Agatha Crhistie crime novel; "Thirteen at Dinner", also known as “Lord Edgware Dies”.

It could also be alluding to the collection of short stories by Christie; "The Labours of Hercules", which follows a private detective closing 12 cases before he retires. He chooses the cases in an order which conforms to the mythological sequence of the Twelve Labours of Hercules. This ancient Greek myth tells the story of Heracles, a great Greek hero attempting to repent for his sins. This may be suggesting that the Ursus girls are each trying, in their own ways, to atone for what they deem as their sins committed during the Chernobog incident.

For example, Rosa clearly cannot forgive herself for failing to protect the lives of the civillian students, as seen in her trust voice line:

"Doctor, after becoming an adult, does it become easier to forget? Once I become an adult, can I forgive myself? If I grow into a mature adult like Doctor, will I be able to overcome these dreadful feelings deep in my heart?"

Using Istina’s body as the clock hands, it is quarter past noon. Together with the book Istina is reading, which is likely “Murder on the Orient Express”, this lines up perfectly with the time of death of the novel’s victim; 12:15am.

Whoa, I never expected this solution! "All the passengers on this train are murderers!"

This could also be a reference to another detective novel by Agatha Christie, The Seven Dials Mystery, which is filled with clock references. The novel has a cover featuring a clock positioned at 4 o'clock, similar to Istina's position in relation to the clock. 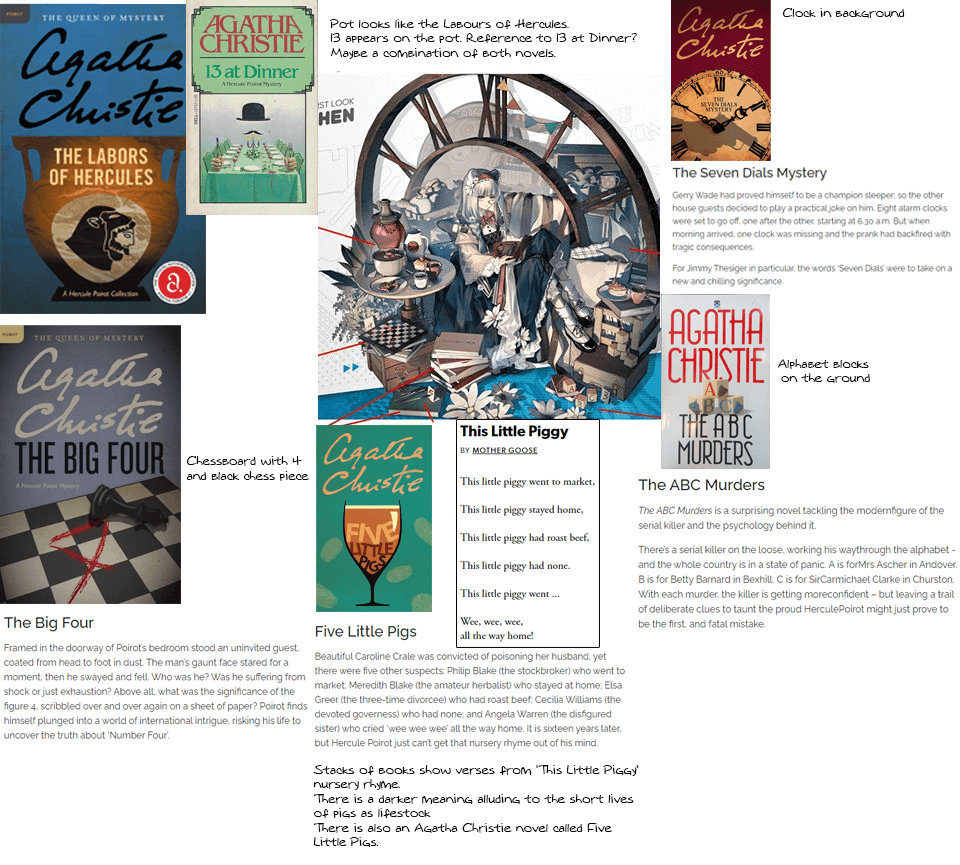 A graphic I made based on a CN graphic.

Istina is enjoying a variety of traditional Russian foods on the table beside her and on top of the book by her feet.

The 2 cups very likely contain red tea, as referenced in Istina’s story in the Ursus event when she brews red tea for May and Rosa.

This is a potential reference to another Agatha Christie novel, Sad Cypress, in which the victim dies of poison supposedly placed in her fish-paste sandwich during a tea party. 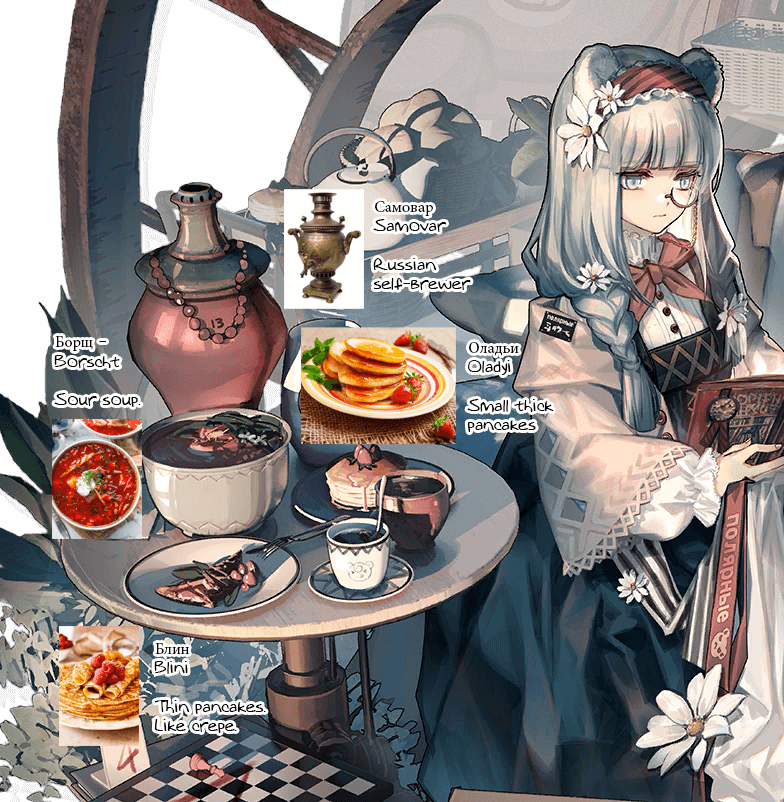 These white flowers are abundantly scattered around Istina. My personal theory is that they are white cosmos, which represent order, harmony, and tranquillity. Ironically, the Chernobog incident greatly upset the peace and serenity of the girls' lives, claiming the lives of many and inflicting irreparable mental damage. However, they could also be white daisies which represent innocence, purity and new beginnings. Similarly, this could have a more sombre meaning - the Ursus girls losing their innocence with the Chernobog incident and starting a new life at Rhodes Island.