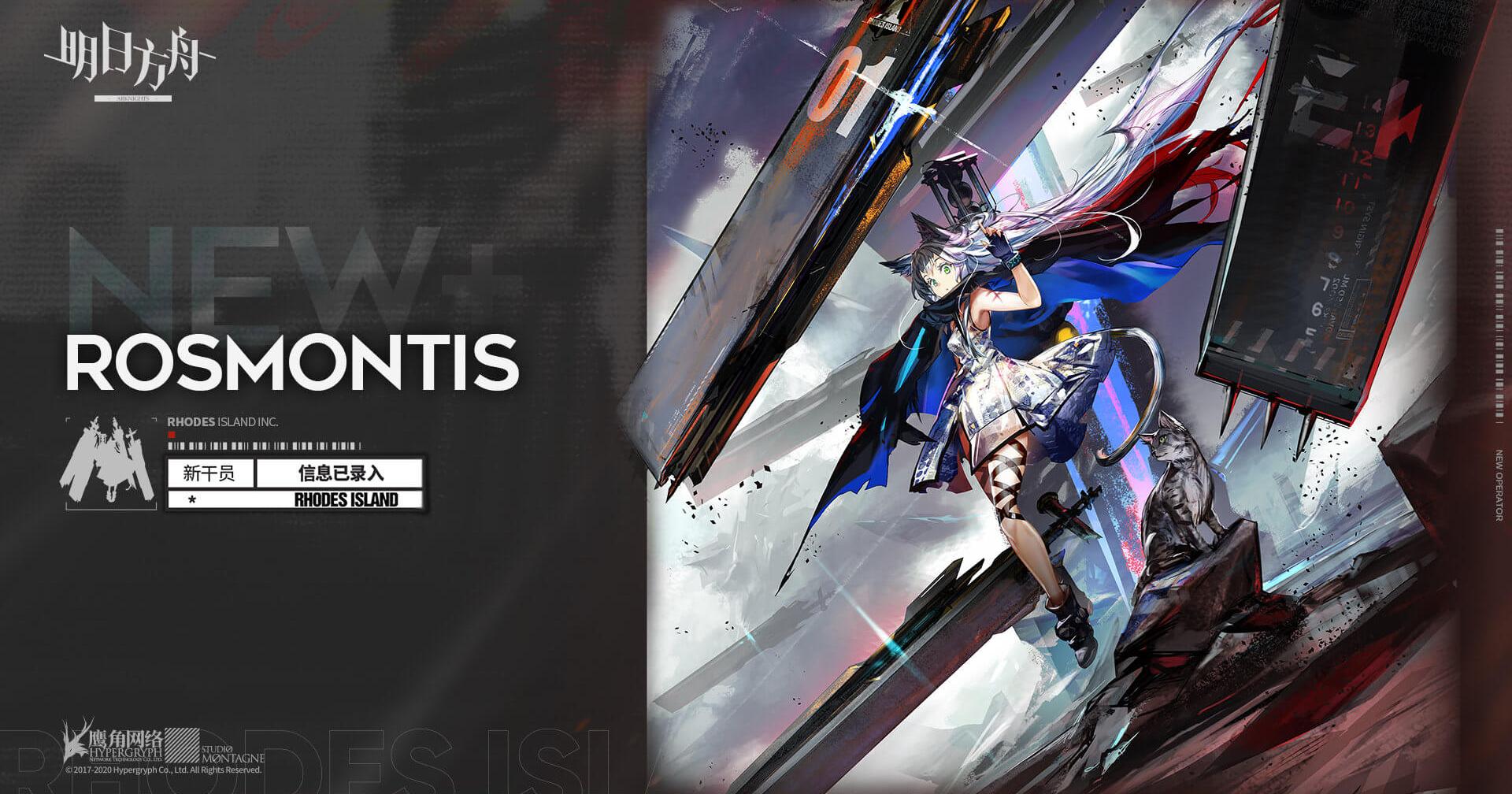 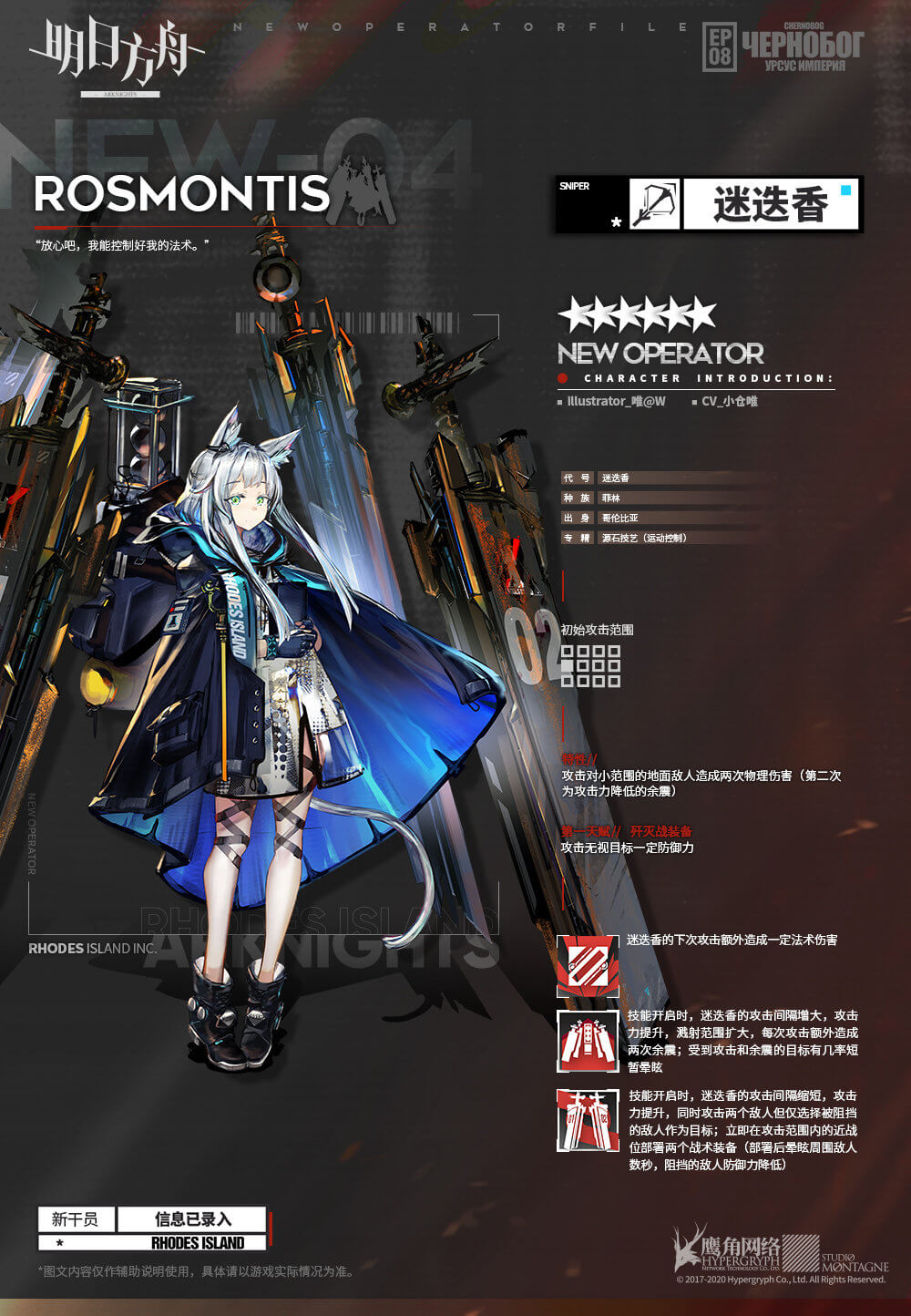 "Hello Doctor, Elite Operator Rosmontis reporting in. Kal'tsit authorized it, you can now command me and my squad. Use my power in the right places, Doctor. Right, I'm easily forgetful, so do remind me."

Don't be afraid of her.

I know that, in your eyes, she's Rhodes Island's annihilation machine. Miglia's disaster, the Kelvin County butcher, the infected resistors' enemy; the enemies that survived the conflict told you that Sarkaz blood flows in her veins, some infected on the wilderness said she's the daughter of a Victorian steel monster; some even claimed that she has no father, and her mother is a living Columbian nomadic city, and her mother gave her four weapons forged from city walls. Facing her is like throwing your body against St. Petersburg.

Rosmontis is a 6★ Sniper with a long range that could potentially be a new Archetype.  Her Trait adds splash damage to her attacks, while her Talents increase her own ATK and that of a Caster ally, and cause her attacks to ignore enemy DEF.  Her S1 changes her attacks to Arts, and S2 increases the power of her ATK and AoE splash and adds a chance to Stun.  S3 summons blockers that Stun when deployed and reduce enemy DEF.  It also buffs her ATK and allows her to hit multiple targets, but only attacks blocked enemies.

Talent: Attacks ignore a certain amount of the target’s DEF

Talent 2:  After deployment, randomly select a deployed Caster operator and increase self and their ATK

Skill 1: The next attack deals an additional amount of Art damage

Skill 2:  During skill activation, increase attack interval, attack splash range and ATK. Additionally, every attack will have 2 additional aftershocks. Enemies hit by Rosmontis’ attacks or the aftershocks will have a chance to be stunned.

Rosmontis is a Limited Sniper Operator with a potentially new Archetype that is a blend of long-range and AoE Splash.  Her kit is all over the place in what it can provide, though it seems to focus mostly on multi-target damage output.

Her Trait gives her Splash damage, giving her the benefits enjoyed by AoE Snipers, while her Talent 1 ignores DEF, addressing a common Sniper weakness against high DEF enemies.  Talent 2 will make her a nice pairing with a Caster (though it looks like she'll have to be deployed after, and it seems unlikely it will be kit-defining.

S1 turns her attacks into Arts, making her one of only 4 Snipers that can do Arts damage (the others being ShiraYuki, Aosta, and Blue Poison).

S2 increases her AoE damage output, and adds a chance to Stun (one of 4 Snipers that can Stun) , making it a nice option for stall or no-block strategies.

S3 is by far the most unique addition to her kit, allowing her to drop blockers that Stun and reduce enemy DEF (a potentially great buff for increasing team DPS).  it also increases her power and targets, but comes with the drawback of only attacking blocked targets.  Other abilities of this sort (for example Ayerscarpe S2) have been a bit underwhelming in practice, since heavy blocking is rarely an optimal strategy, especially for some of the toughest game content.  It will be interesting to see the final details, and how this Skill works out in practice. 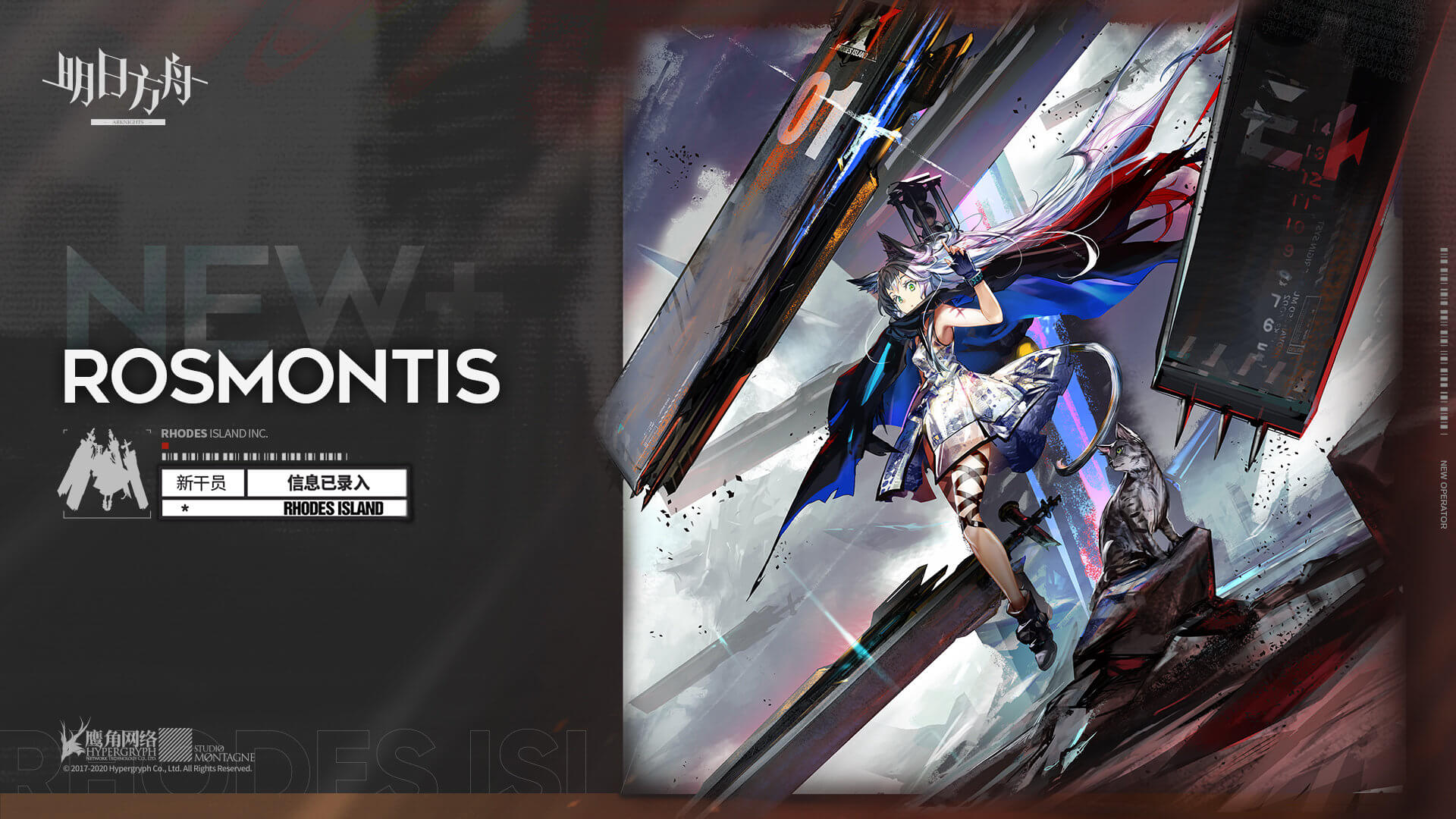 Arknights: Should You Pull? Standard Banner: Ch'en and Shining

Who to raise?(most return in investment)
just started the game like 3 days ago and I have 3 6 stars, silver ash, shining and…
About joint operation banners
I’m thinking of saving my pity for it since I’m around 50 rolls with no 6* but does it…
After 2 months playing... thoughts and experience
Good day everyone, This is just my personal thoughts and experience after playing AK…
Grani & The Knights' Treasure Event (rerun) - Help
Hey guys, Mastro-kun here I want to share with you my latest walkthroughs for the …
Finally got a top operator tag, who should I pull?
Finally got my first top op tag after a month. Who should I pull? I am thinking I…
Read More