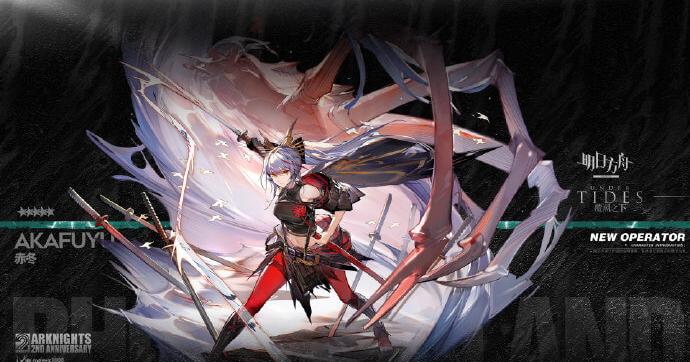 They Have Begun Emerging! 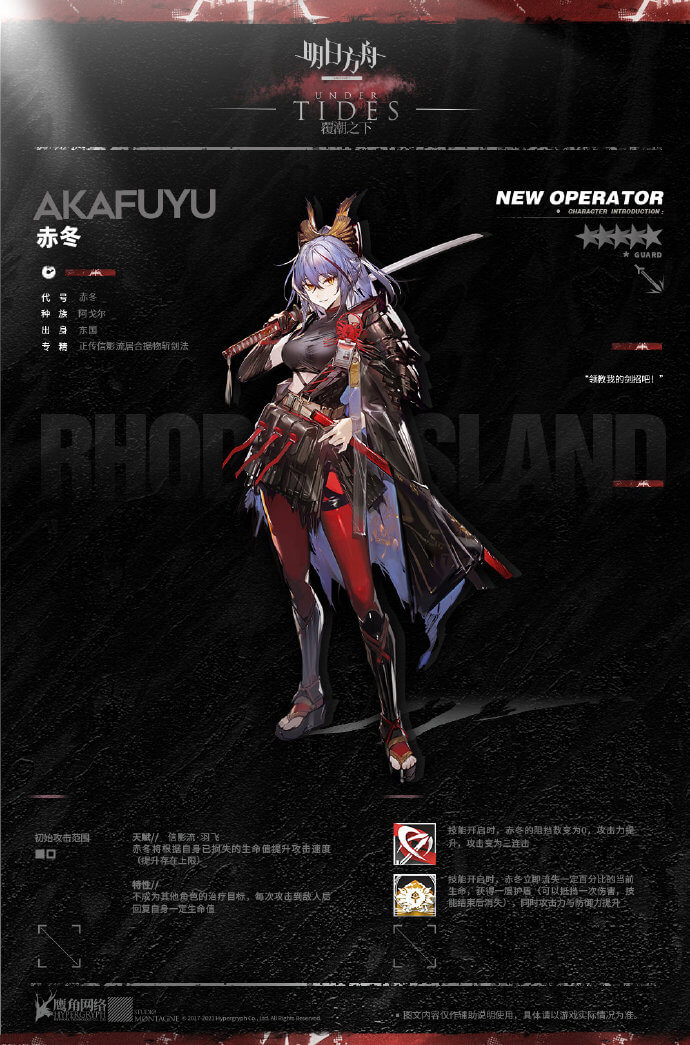 “Akafuyu, swordsman, the strongest kind. My sword? No matter where, I will never set down my sword. Ha ha, you can stay away if you’re scared.”

She was recommended to come to Rhodes Island, and very quickly swordsmanship class became a new addition to the morning workout squad. She’s passionate about inviting certain Operators to practice with her, and insists on dragging them to drink afterwards no matter what. The only problem is, after getting beaten up and getting drunk, when you see her the next morning, she still might not recognize who you are.

[Akafuyu] is a 5★ Enmity Guard , which means she cannot be healed directly by allies and restores HP every time she attacks. Her Talent increases her ASPD as she loses her HP, and her skills allow her to stop blocking and deliver multi-attacks, or drop her HP and gain a Shield.

Trait: Can't be healed by other units. Recovers self HP every time she attacks an enemy

Skill 2: On skill activation lose a percentage of current HP and gain 1 layer of Shield (Can block 1 instance of damage, disappears when the skill ends). Increase ATK and DEF.

Akafuyu will be our third [Enmity Guard], and our first at the 5★ rarity.  Like Hellagur, her ASPD increases as her HP lowers, making her more effective when she has sustained damage.  Like Utage, Akafuyu's S1 makes her stop blocking, which can be useful to prevent her from dying (since she can't be healed directly), and each hit attacks twice, effectively increasing both her DPS and self HP gained from her Talent.

S2 reduces her HP, thus increasing her ASPD (and DPS) through her Talent, while also increasing her ATK (more damage!) and DEF (more survives!).  To help offset the HP loss, she also receives a [Shield] that will absorb one damage instance.  The Skill looks very similar to Utage's S2, which is activated On-Deploy.

Overall, I think Akafuyu's strength will rely on her S2. Her S1 provides a consistent-damage option with some survivability if players want to use her as a front-line support melee DPS, but there tend to be other effective options that can do this as well but at a much lower DP Cost.  The skill making her not able to block and lacking extra self sustain will limit its usefulness in one of the main roles for Enmity Guards: lane solo-ing without healing support.

Akafuyu's S2 looks to be a Physical damage skill that is similar to Utage's, but designed like an activated Skill and with extra survivability built in with the Shield and increased DEF.  This could be an interesting burst/survivability tool, and could potentially be used as a heli-drop depending on the SP costs.

Unfortunately for Akafuyu, the meta already has strong 1 block burst damage and heli-drop options, and she lacks the 1v1 solo power packed by Hellagur, her higher rarity counterpart. 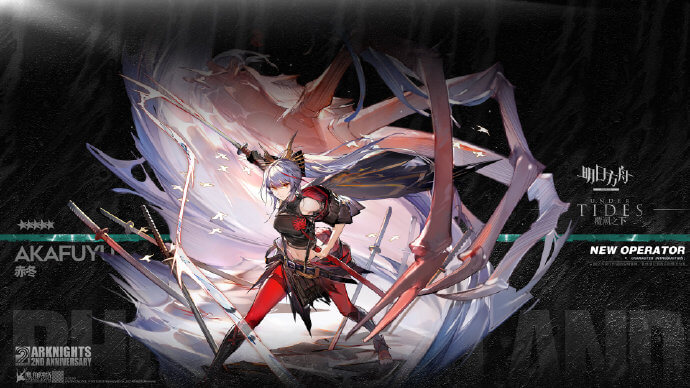