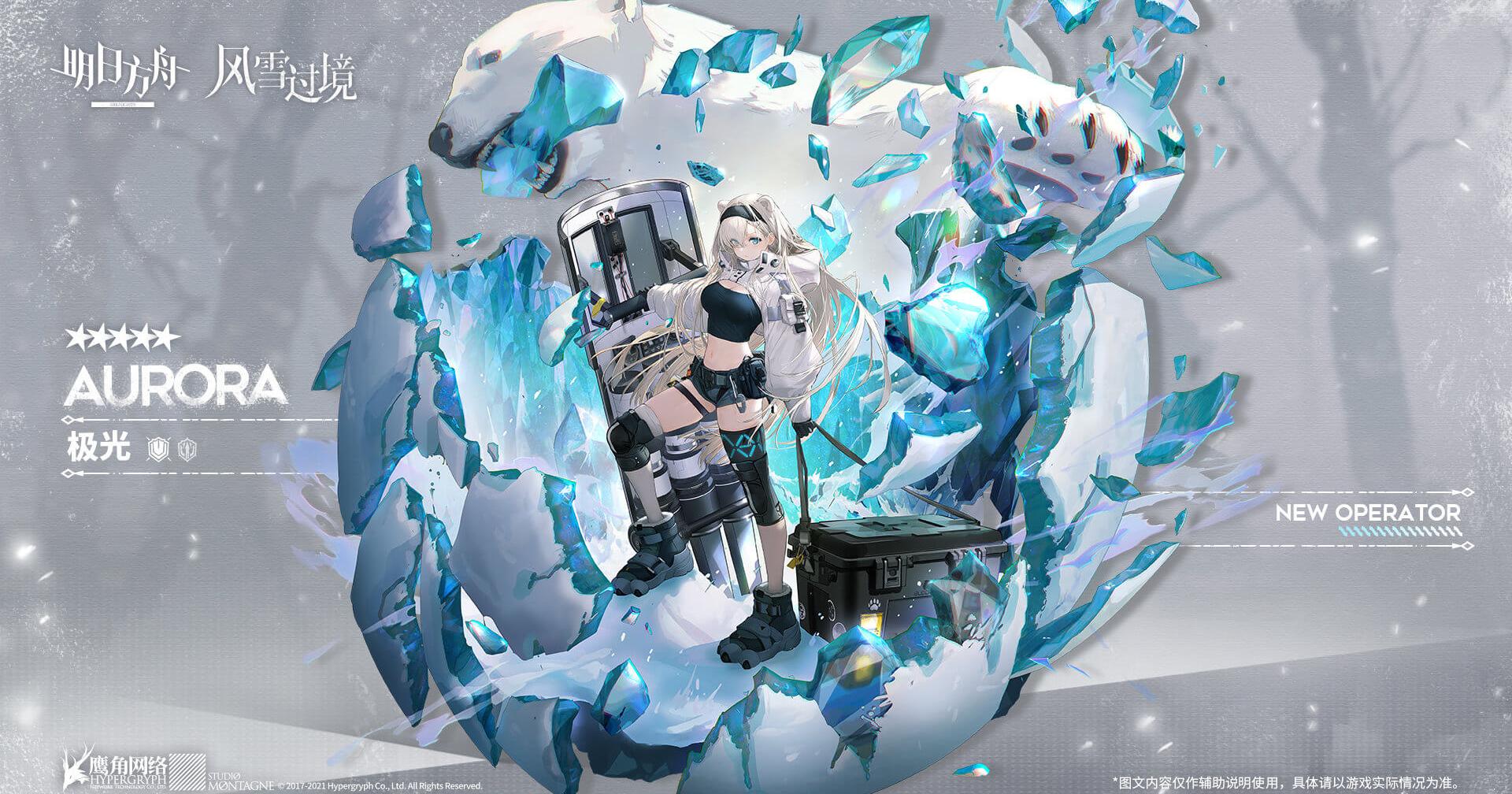 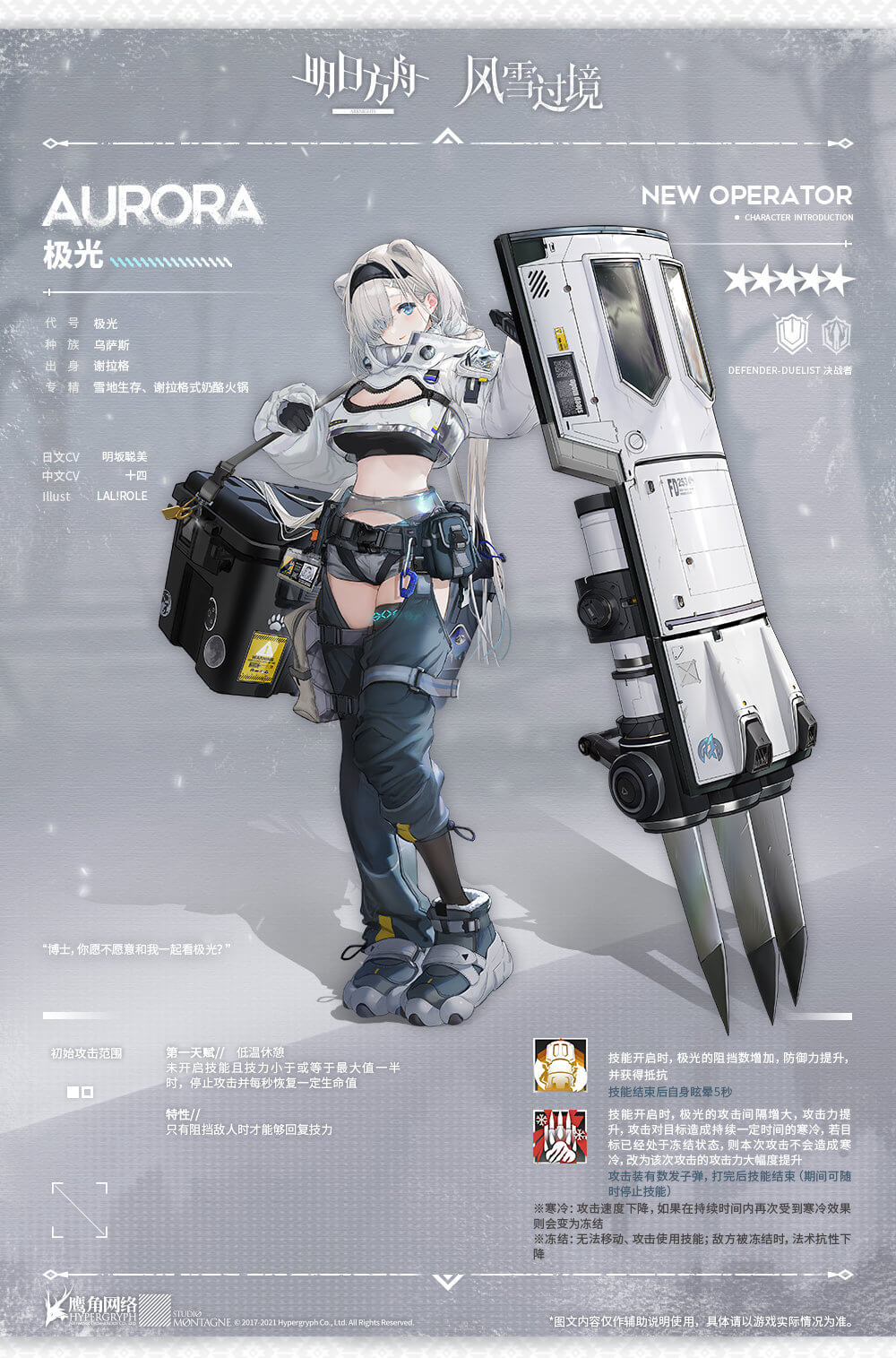 "Doctor, I'm Aurora. Miss Closure often bring you up. I promised her, I'll protect you."

As an Ursus from the land of snow, she's experienced in surviving in a low-temperature environment. No matter if it's an Arctic expedition, or an escort that requires venturing deep into the cold, she can finish the mission with excellence.

If you need to walk through wind and snow, please entrust your hand to her.

Aurora is a 5★ Duelist Defender that can inflict the Cold and Frozen debuffs on enemies, and has increased damage against Frozen enemies!

Talent 1: When skill is not active and SP is less than or equal to half the maximum, stops attacking and recovers a certain amount of HP per second

Skill 1: Increase Block Count, DEF and gain Status Resistance. Self is Stunned for 5 seconds after the skill ends.

Skill 2: Increase Attack Interval and ATK. Attacks inflict Cold for a certain duration. If the target is already Frozen, the current attack will not inflict Coldl and will instead deal greatly increased Attack Power. Grants a certain amount of ammo upon skill activation and the skill ends when all ammo is used (can be manually deactivated).

Freeze: Unable to move, attack and use skills. When enemies are Frozen, RES is reduced

Aurora will be the second Duelist Defender to appear in the game, the first being 6★ Eunectes.  This Archetype is characterize by high stats, block-1, high DP costs, and only gaining SP when they are blocking.

Only gaining SP while blocking can be very limiting and annoying to work around when you want to have the high-impact skills available at the time you need them.  A common way to deal with this is to charge the skills on weaker enemies before the the skills are needed.  However, because of the Archetypes high stats combined with block-1, weaker enemies often die too quickly to sufficiently charge the skills. Aurora's Talent seems like it is an attempt to address this problem: she won't attack at all if her SP is less than half and will regen HP instead, allowing weaker enemies to survive while they charge her skills.  This could have some potential drawbacks, however, as if you are hoping to have Aurora hold a lane, her block-1 means she will easily get overrun if she isn't killing what she is blocking.  Since the self-regen is only occurring until half of max SP, it isn't clear if it will be enough to be relied upon to enable Aurora to function solo without healing support.

S1 looks to be a defensive oriented skill, increasing block count and DEF and granting Status Resistance.  Although Status Resistance can be a situationally useful tool, purely defensive skills aren't overly useful in the current game, and her lower block count, even with skill active, would make her generally less useful for this role than Normal Defenders.  Not only that, but she is stunned after Skill duration, not exactly a good outcome for a defensive skill that increases block count but doesn't enhance the ability to kill the extra enemies being blocked.  It seems unlikely that this skill will see much use.

S2 really seems to be where it is at for this unit, as it essentially turns her into a Yeti Icecleaver that can Freeze her own enemies. The skill increases her ATK and Attack Interval, and attacks inflict the Cold Status Effect.  Like when it is applied to our allied Operators, inflicting the Cold status reduces enemy ASPD.  Inflicting Cold on an enemy that already has the Cold debuff will Freeze them, making them unable to move or use skills. Interestingly, unlike the Freeze applied to our Operators, frozen enemies will also have their RES reduced.

Once an enemy is Frozen, S2 will stop applying the Cold debuff and instead attack with increased damage (Yeti Icecleaver!).  Also notable is that the skill uses the Ammo mechanic, giving her a certain amount of "attacks" when the skill is activated, with the skill ending when the ammo is depleted or the skill is canceled.  This can be advantageous as it gives the skill a pseudo-infinite duration that doesn't waste any of the skill, and can be especially nice in reduced-SP-gain challenges/situations.

How strong this skill will be in practice will likely depend on the details, like the extent of the damage bonus against frozen targets, and how many hits she can get in while the enemy is frozen: S2 would take 2 hits to an unfrozen target before gaining the damage bonus on the 3rd hit, and the skill reduces her ASPD, giving enemies more time to thaw.  She may also synergize well with other allies that can benefit from the Frozen RES reduction, and allies that can inflict the Cold/Frozen debuffs to maximize the number of S2 hits delivered while the enemy is frozen, but at the time of this writing there is only one other, the recently introduced Kjera. 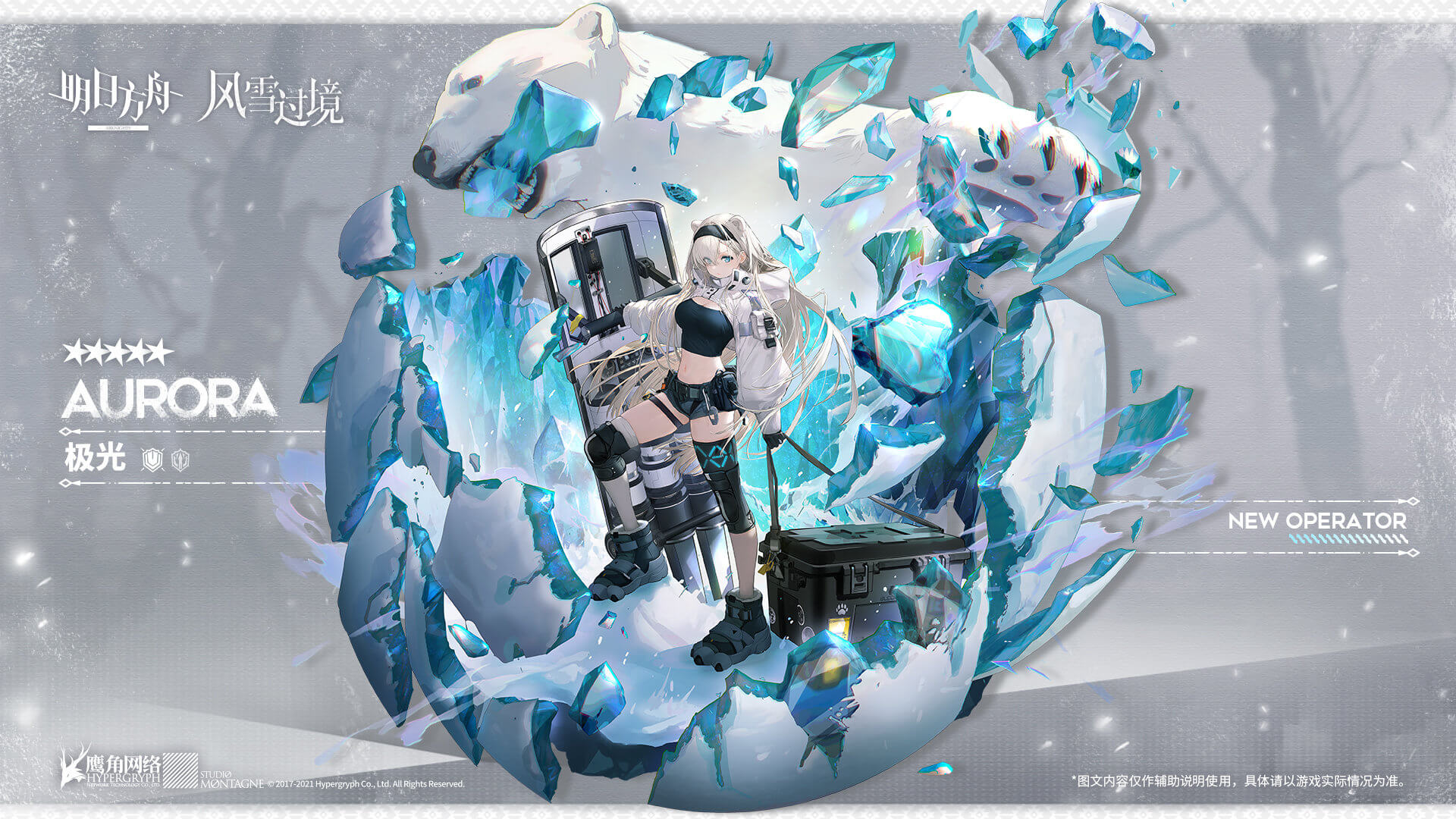