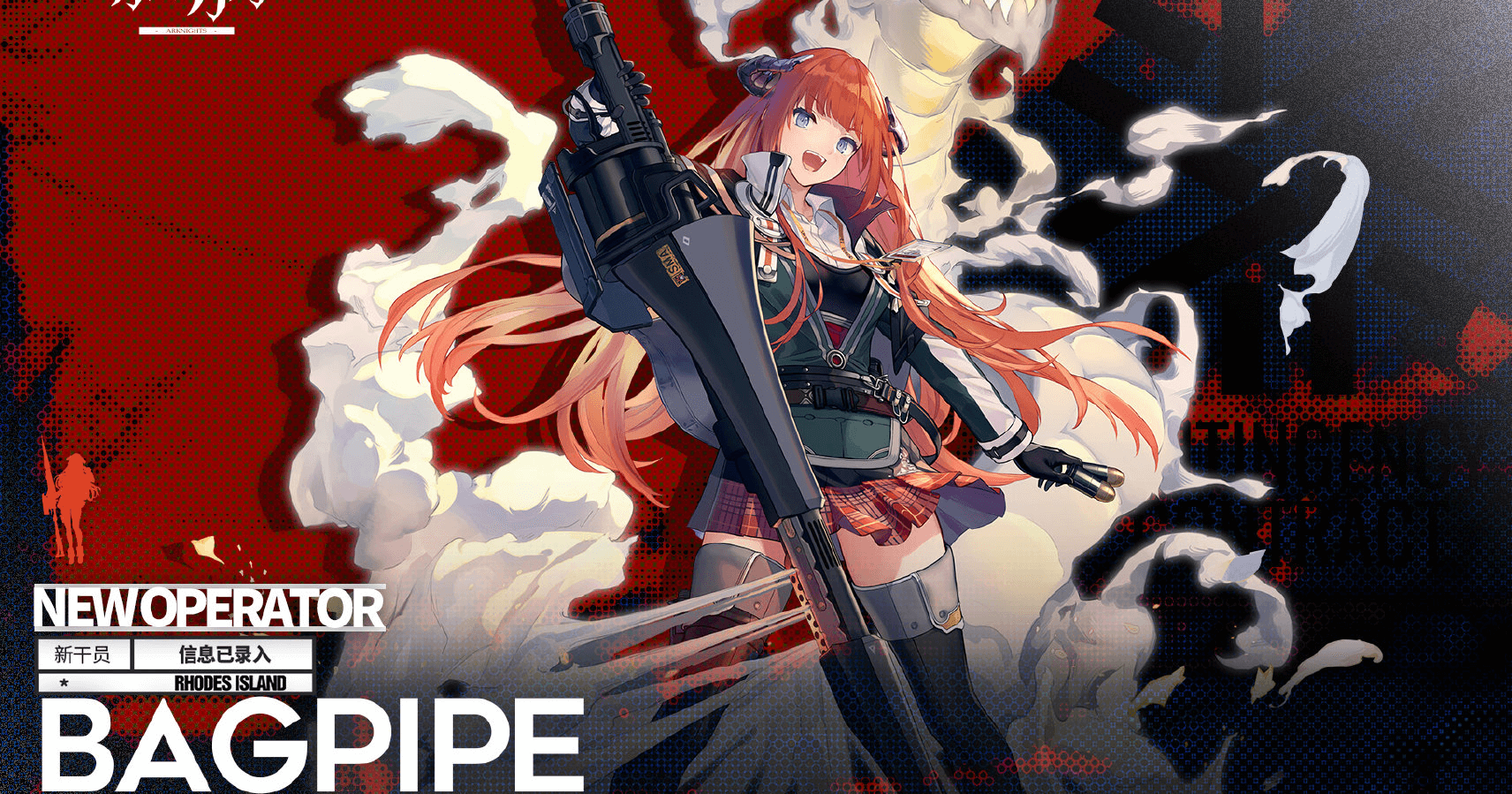 After leaving people drooling over a banner image and animations in the CC PV video, more information on Arknights’ newest 6★ Operator has been finally released!  Bagpipe will be a DP-On-Kill Vanguard of Rhodes Island, the first new 6★ Vanguard introduced since launch! With her red hair and Scottish kilt streaming behind her from the force of her wicked steaming shock-lance type weapon, Bagpipe will slay your enemies, and nothing will be left in the wake of her destruction other than Reunion bodies and loads of DP. 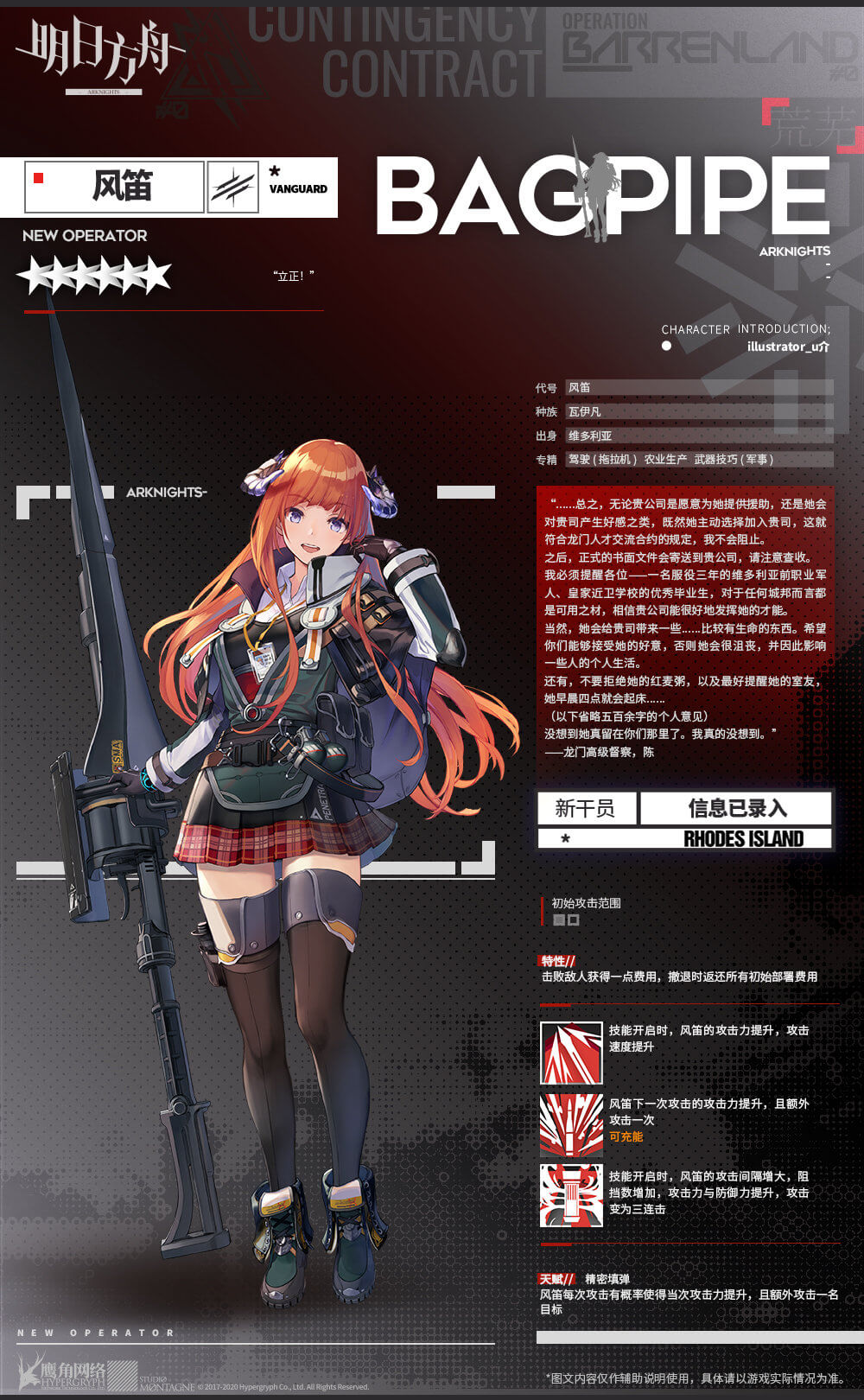 For more information on the Banner for Bagpipe, and other campaigns announced along with the upcoming CC event, see the complete list here:

Trait: Obtain 1 DP after this unit defeats an enemy; Refunds the original DP Cost when retreated

Talent 1: When attacking, has a chance to increase the Attack power of the current attack and attack an additional enemy.

Skill 2: Increase the Attack power of the next attack and attack twice. Can be charged.

Note: These are first impressions and based on conjecture since we don’t know the exact details.  Analysis will be updated when they are available.

Finally a new 6★ Vanguard!  And our first of the DP-On-Kill Vanguard Archetype.  Bagpipe appears to be built along the same blueprint as Vigna: a high DPS physical damage killing machine, enhanced further by Skills and Talents, whose sole purpose is to gleefully slaughter your enemies and turn them into haggis while gaining DP (and feeding the base) in the process.

Based on what we’ve seen with other lower rarity Vanguards, we expect Bagpipe to have much higher Stats than the DP-On-Skill Vanguard Siege.  Thus, we can expect to see the highest stats we’ve seen to date on a Vanguard.

Bagpipe’s Talent appears to be an upgraded Version of Vigna’s ( a chance on-hit to increase damage), with the addition of having a chance-on-hit of attacking an additional enemy.  This is clearly a potential advantage in multi-target situations. It seems to synergize very well with her S3, which increases her Block Count. However, with a base Block Count of 1, it is unclear how often this Talent will be utilized outside of S3 use.  Placing a Blocker near her could help keep multiple enemies in her attack range, and combined with her Skills (dealing multiple attacks), represents some potentially sweet multi-target burst. Details of her second Talent on E2 are currently unknown. 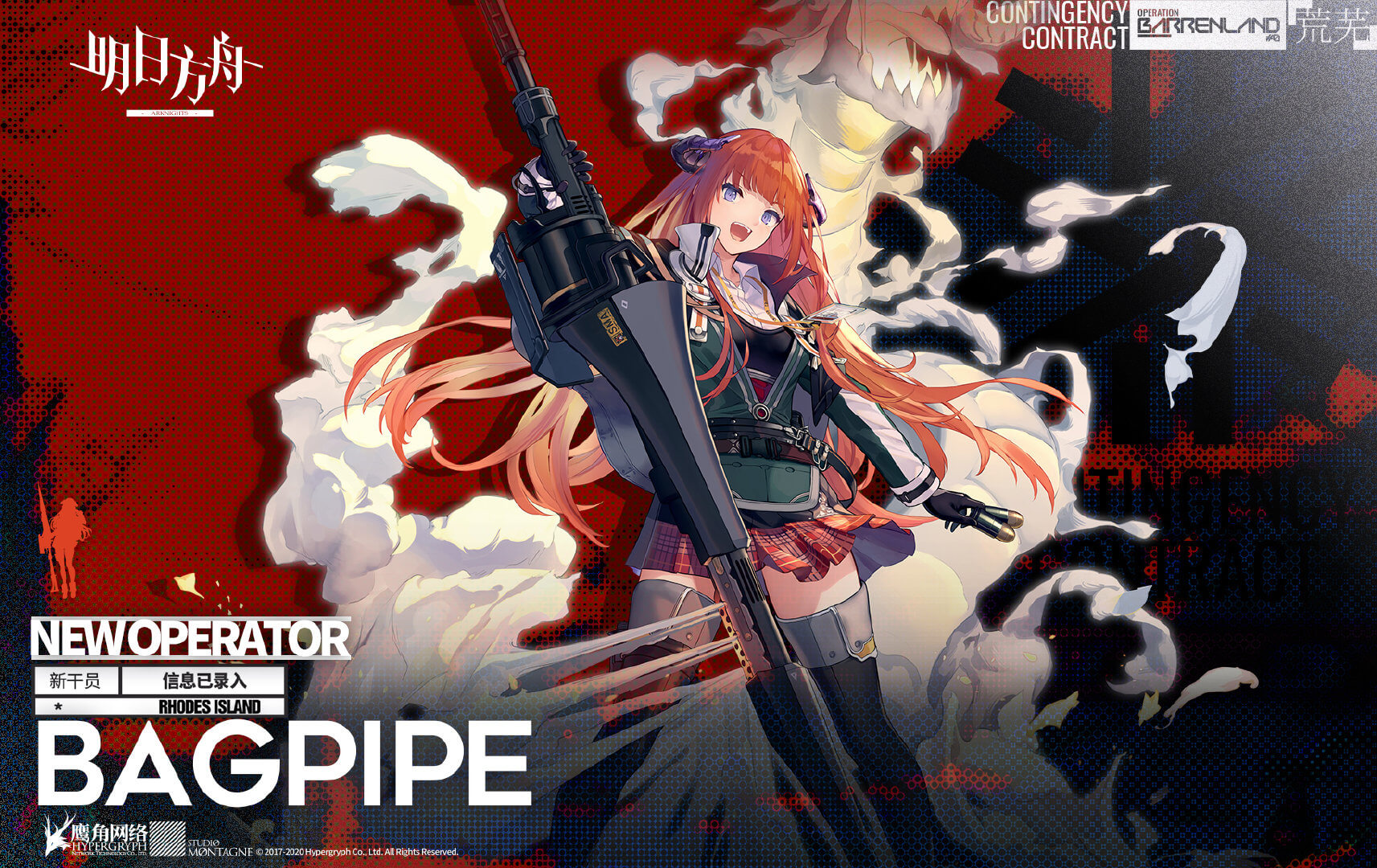 Is anyone else concerned she can’t kill this slug?