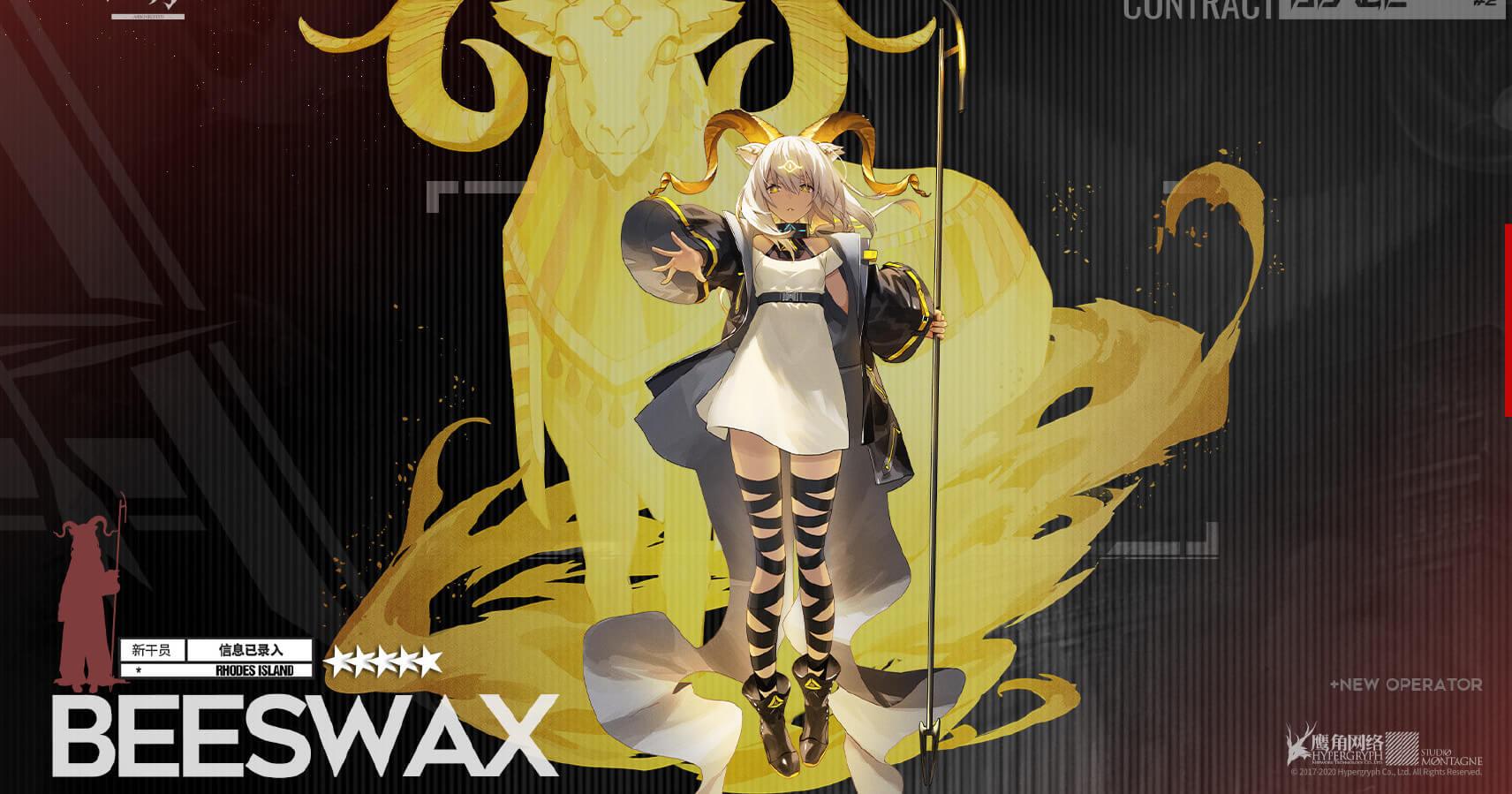 Beeswax is a 5★ Caster coming soon with Contingency Contract Season #2, and she brings a few firsts to the world of Arknights.  She will be the first dark skinned Operator, and also the first of her Archetype in the Caster Class. Her range is a 3x3 box centered on her, and she only attacks when her Skill is active.  She also has increased DEF and RES and does AoE damage to all enemies in her range. 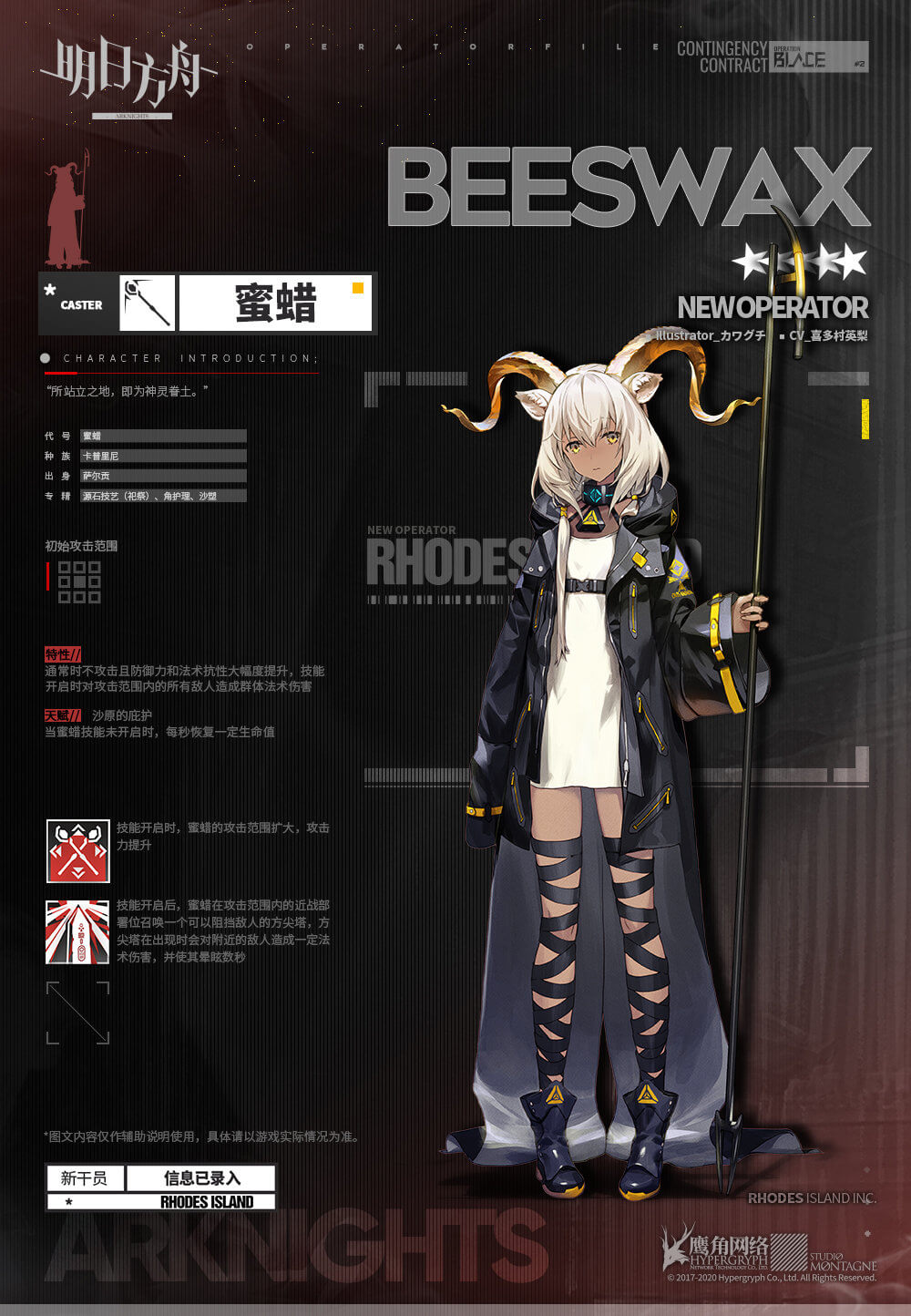 Trait: Does not attack normally, greatly increased DEF and RES. When skill is active, deals AoE Arts damage to all enemies in range.

Attack Range: At E0, a 3x3 grid centered on Beeswax.

Talent: When skill is not active, recover HP every second.

Skill 2: After skill is activated, summon an obelisk that can block enemies in a melee tile within attack range. Upon appearing, the obelisk deals Arts damage to nearby enemies and stuns them for several seconds

Any time there is a new Archetype introduced, it can be tricky to do any kind of analysis before the details become known.  What we know is that she will function sort of like Angelina's Skill 3: attack while Skills are active, and otherwise restore HP.  The main differences appear to be that she only restores HP to herself, and her attacks hit all enemies in her range.  The things we don't yet know that will effect her usability are her range at E1 and E2 and S1, the relative ranking of her stats compared to other Operators, her DP cost, etc.

Her trait granting increased DEF and RES could potentially set her up to be a ranged tank depending on their values, and her Skills appear to give her the option of functioning with a DPS or control focus. 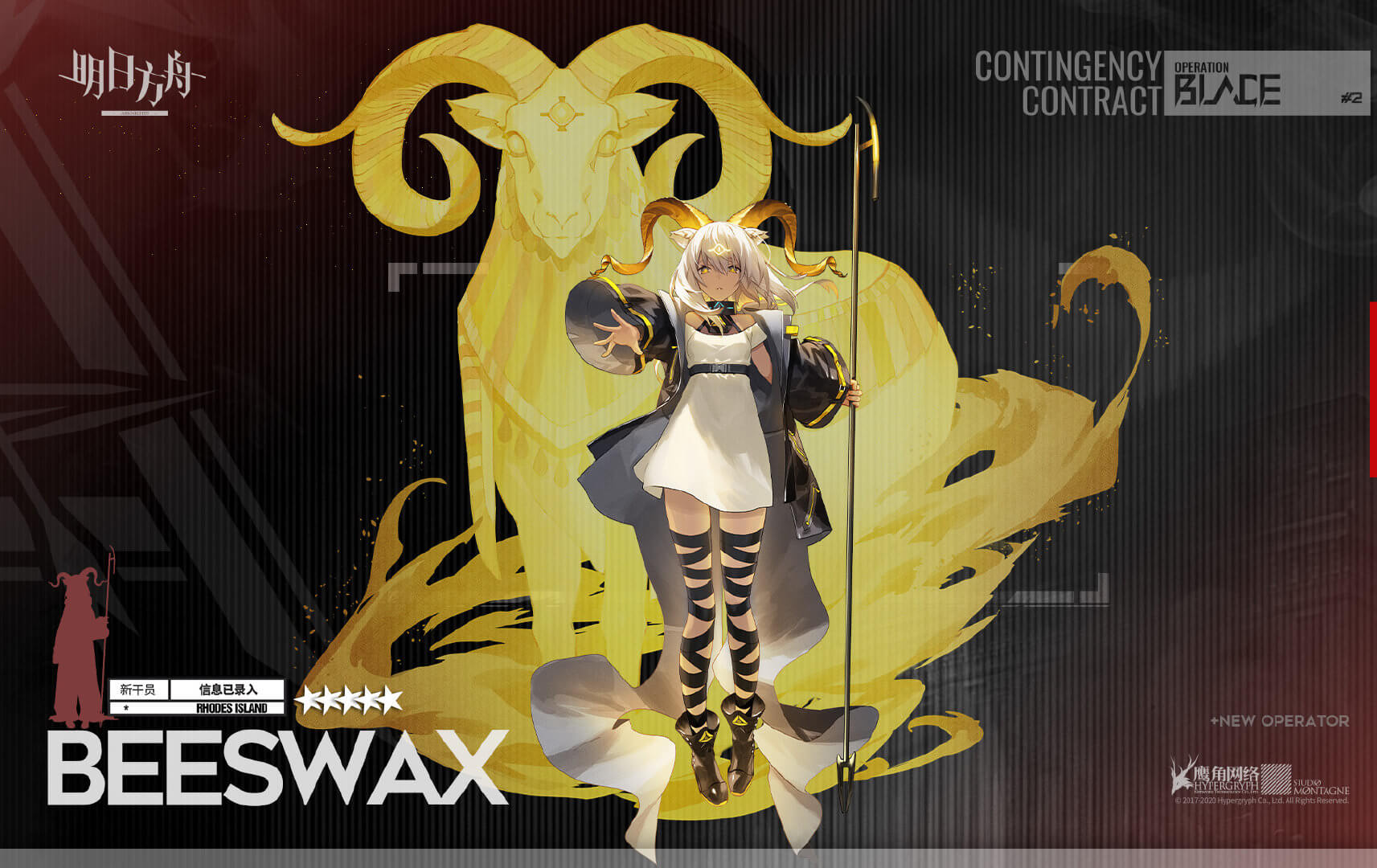 Arknights Lore: Mephisto in Reference to Caladrius and Other Trivia

How many sixers?
I was just looking over my units by rarity and saw that after starting with 2 Sieges…
Contingency Contract Season #3 [Operation Cinder] General Discussion And Preparation
image1560×878 378 KB Yostard just announced CC for late May, as usual, discuss about…
Bored Doctor Chronicles #29: The thread that came after the thread that broke the rules AKA Edit the first post with your name and one image from your favorite anime of all time
LeiCiel image1680×1050 803 KB ArcanaApocalypse Gankutsuou.full.957234000×2100 1.64…
I got a garunteed ticket
Got the shop box and am new to arknights. I have Shining already and Rosmontis, as…
Indra Vs. Vulcan
Hey, so I got the choice ticket for Indra and Vulcan, I’ve recently pulled Mudrock,…
Read More