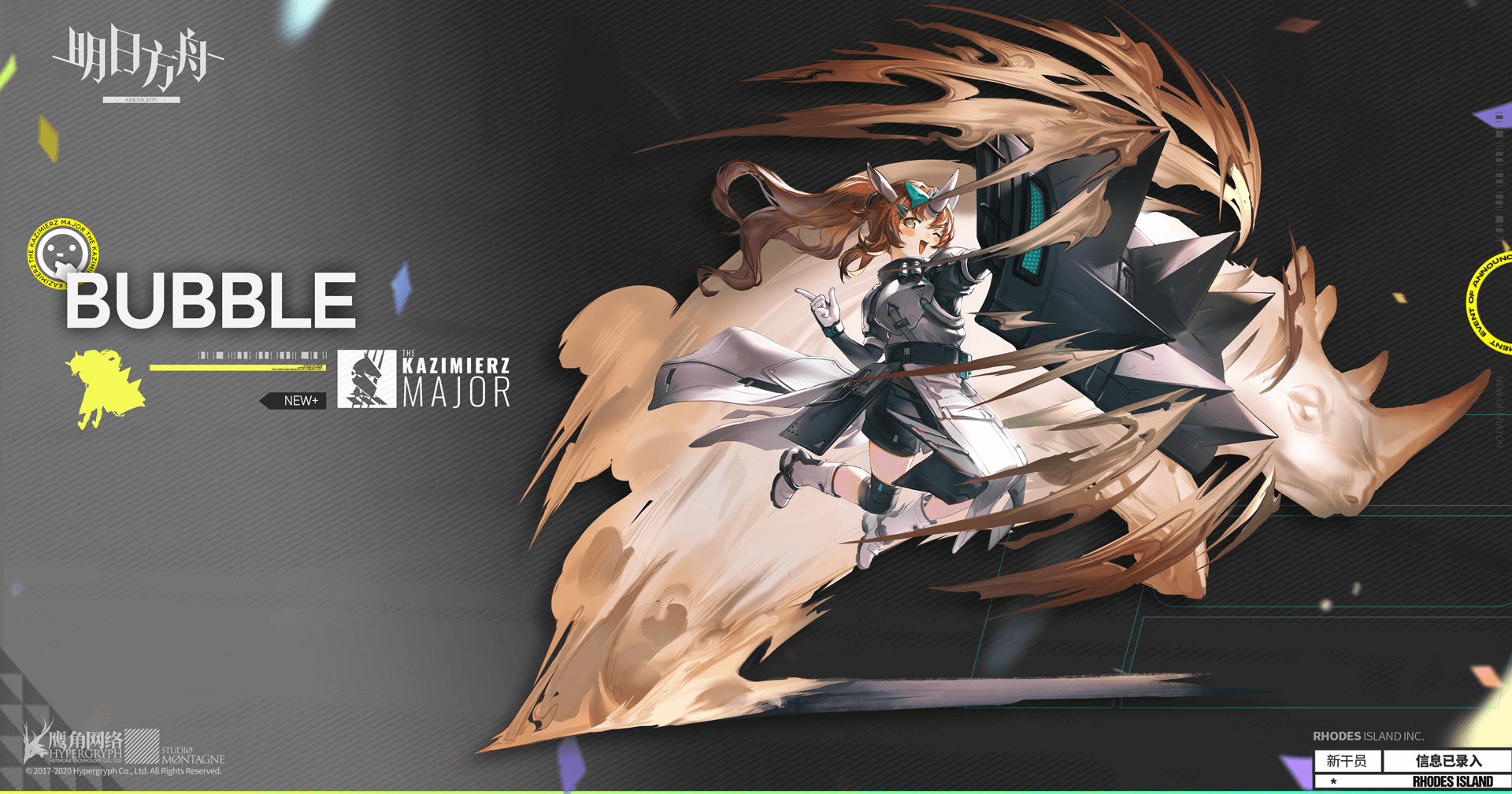 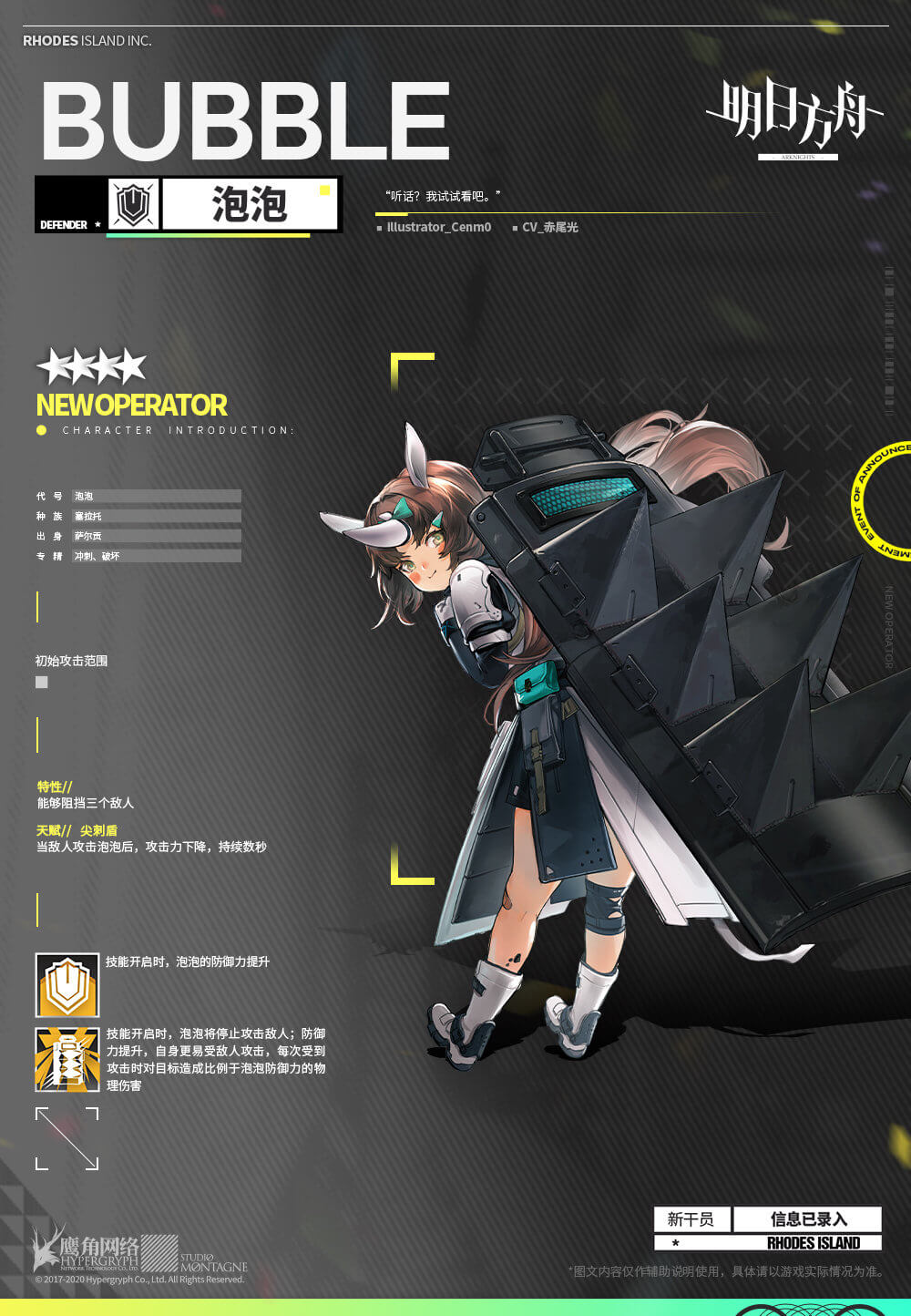 "You're the big brother from the training camp? You're called the Doctor? Hmm... But you don't look strong... Whatever, I'm Bubble, the weakest in the tribe, you gotta train me to become the second strongest."

Bubble is the strongest warrior of her Cerato tribe—'s daughter. Because she can't even beat her father's finger, and bursts like a bubble, she received this callsign.

To train Bubble, she was taken to Rhodes Island, but in reality, she's here to treat her Oripathy. Bubble herself doesn't know about this.

She doesn't really follow the rules, can be very stubborn at times, and is seen as a troublemaker by the adults, but she gets along surprisingly well with her peers.

Bubble is a 4★ Normal Defender with Talents and Skills that enhance her survivability.  Her S2 also draws attacks (Taunt) and deals damage to those that attack her.

Talent: When attacked by enemies, reduce their ATK for several seconds

Skill 2: During skill activation, Bubble stops attacking enemies. Increase DEF and become more likely to be targeted by enemies. When Bubble is attacked, deal physical damage proportional to Bubble's DEF to the attacker.

Bubble appears to be a purely defensive/mitigation oriented Defender.  Her Talent reduces the ATK of enemies that attack her, and both of her Skills increase her DEF, which is a strong stat to begin with for Normal Defenders.  Her S2 provides a "Taunt", which in Arknights basically means that enemies will target her over an Operator that was deployed later than her if both are in their range.  Both of these abilities are fairly rare among Operators.

Whether she sees use or not will likely depend on how she compares to other Normal Defenders in a "purely defensive/survival" role ( fore example  Cuora, Bison, Hoshiguma, Nian, etc) 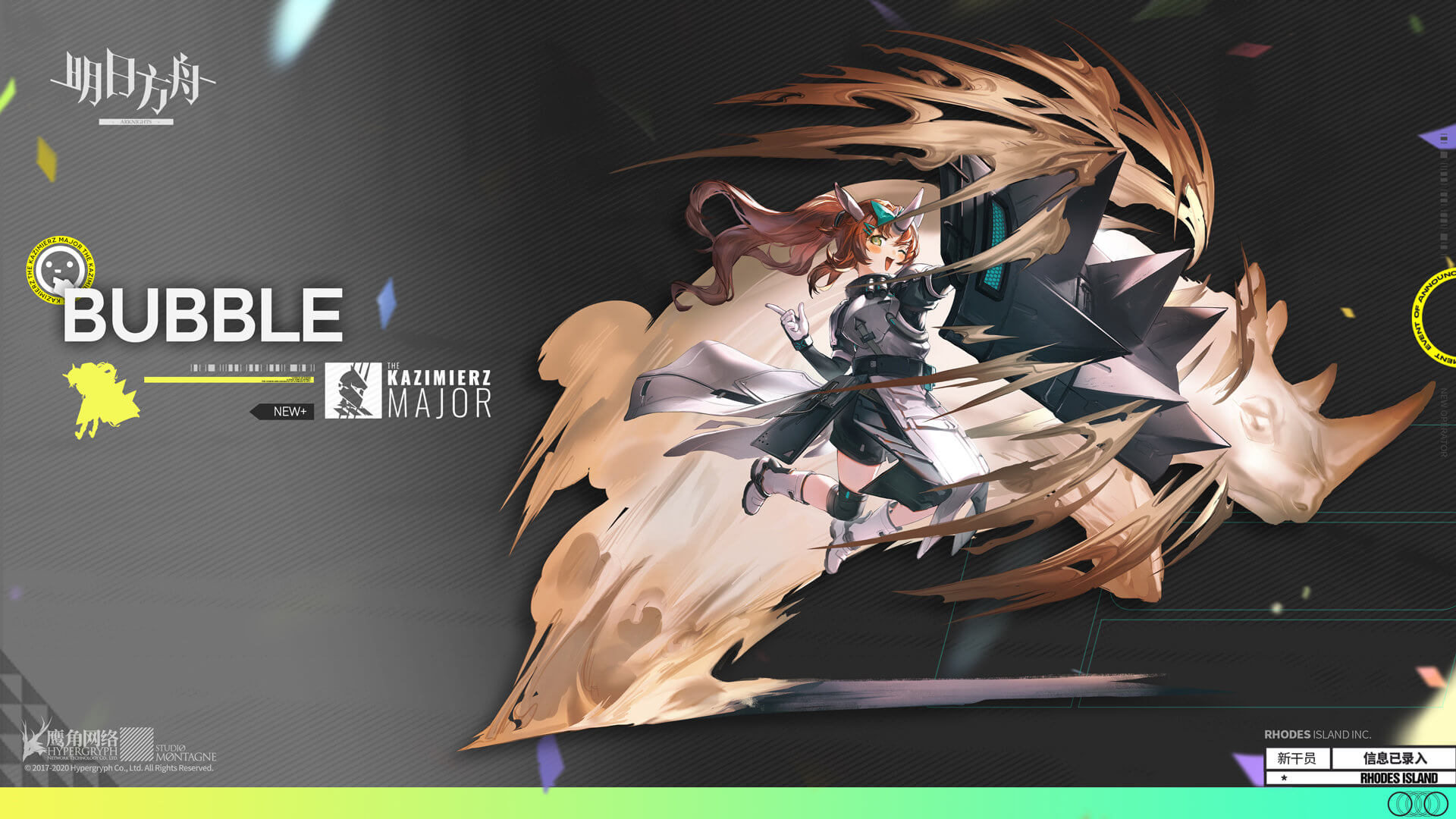 Welfare tokens
Is it worth buying welfare operator tokens from event shops? I heard you can get…
New Player and CC !?
I want to ask something about the cc event, not specific cc btw. I’ve just started…
Bored Doctah Chronicles #23: Ready for the Challenge Stages ? Mastro will grant you his loli-power if you join his Cult ! (limited offer only today)
__warfarin_arknights_drawn_by_ozeu0916__7bd8dad87b3502809546c3cb7d9476fb1000×1415 365…
Curious Doctor from 1st year anniv
Just wondering since most 6 stars operators in the 1st anniversary livestream had been…
Best support units (general)
I was wondering what you think the best support units would be. Which operators do…
Read More