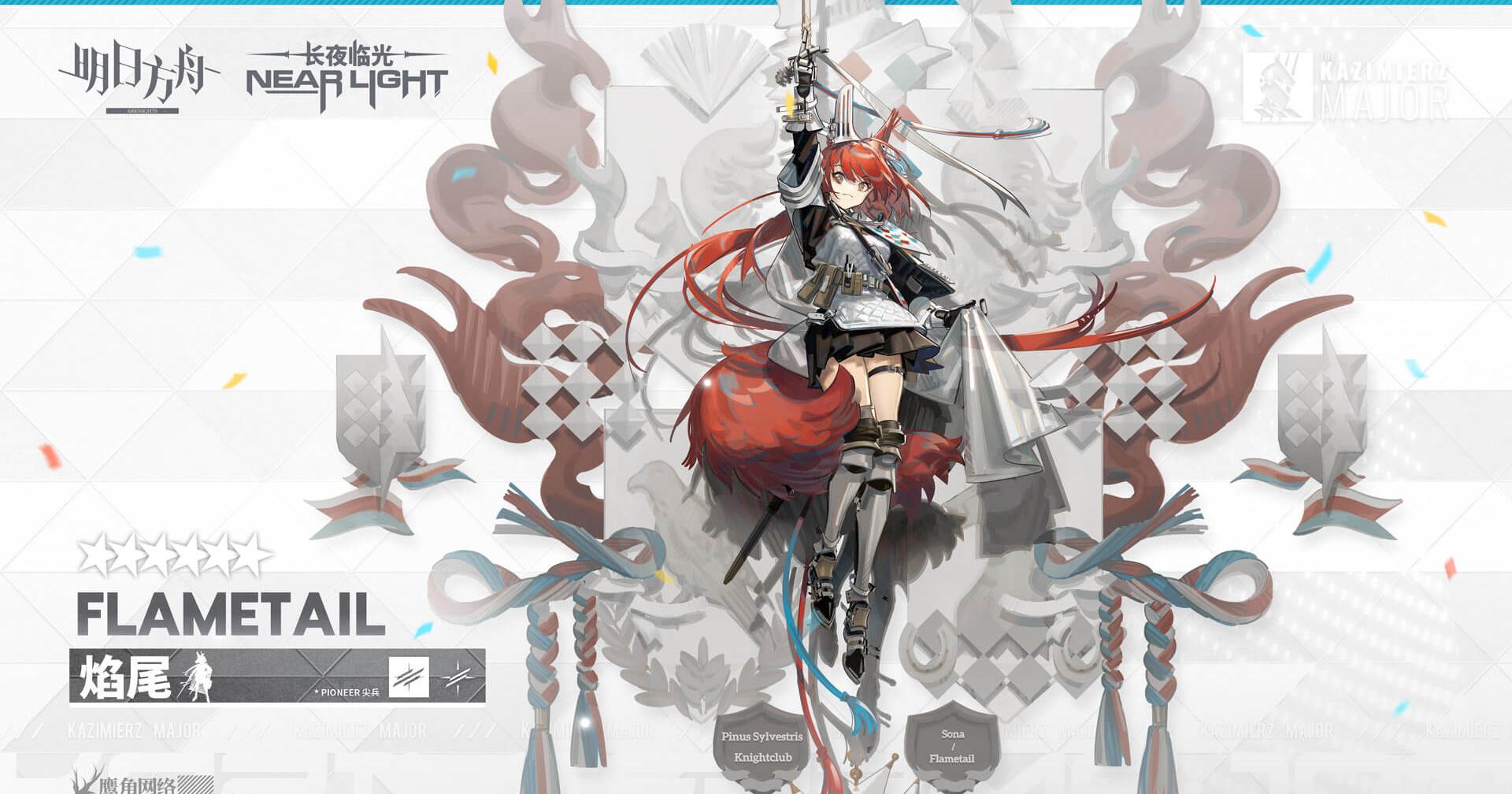 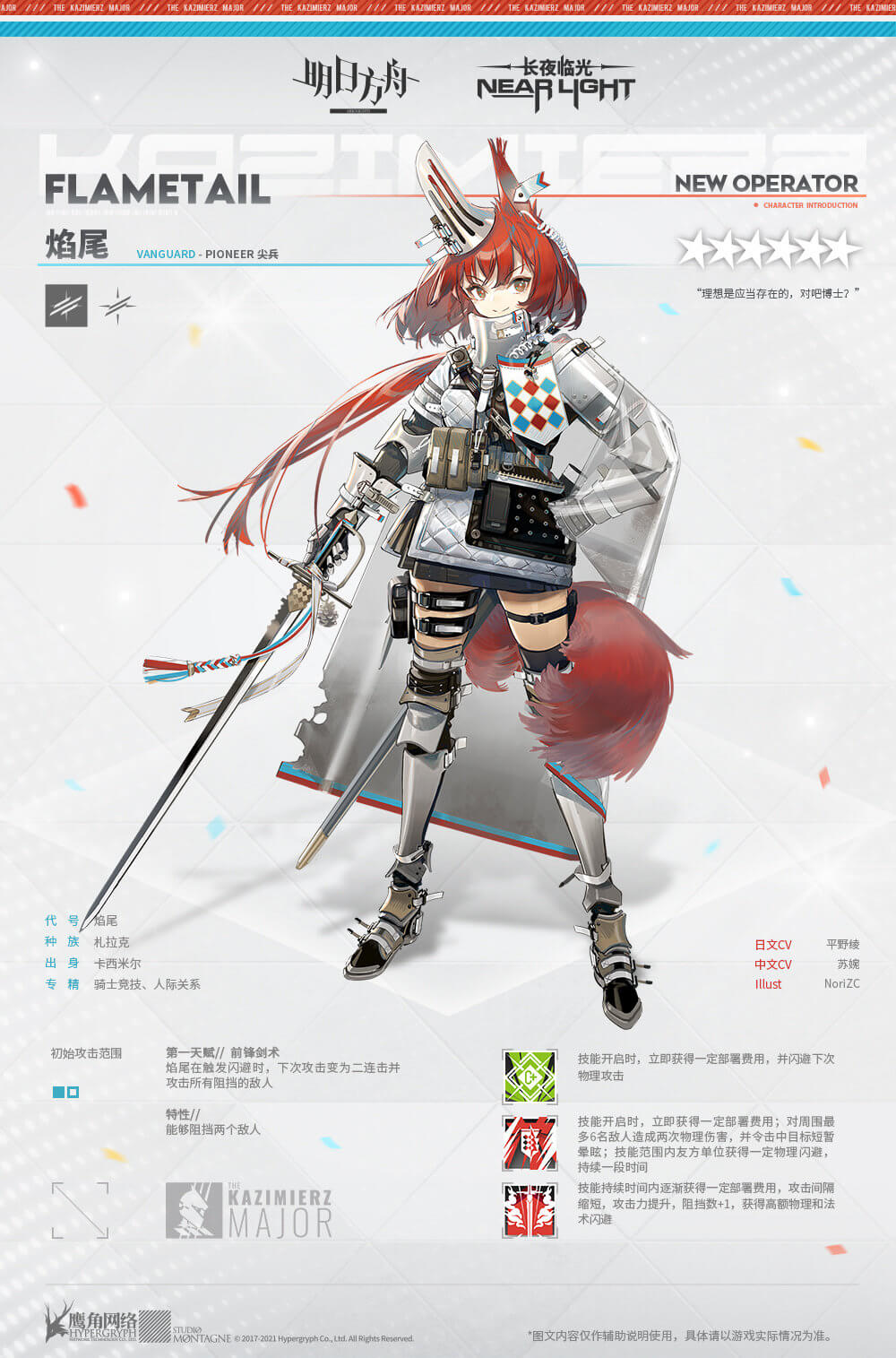 "Captain of Pinus Sylvestris, the Flametail Knight, Sona! Are you the Doctor? Oh... um... you're a bit different from what I imagined, but that's whatever, I'll be counting on you from now on, Doctor!"

Before the Flametail Knight Sona arrived at Rhodes Island's human resource department, the Infected knights from Kawalerielki have already filled up the hallway.

Many Operators who weren't directly involved in the incident are curious, curious about what legendary knight led Kazimierz's Infected to this stage, and even more curious about what genius, madman or brilliant leader can snuff out Kazimierz's lights, even if only for a few dozen minutes. Then, Flametail appeared before everyone.

Not some hulking man wielding blades, not some politician full of knowledge, and not some shrewd noble knight—only a slightly embarrassed, smiling, infected girl.

Is she really the leader of Pinus Sylvestris? Many rubbernecking Operators had that thought. But before Flametail entered the HR department, she looked back on the expecting infected, and we saw something familiar in her eyes. She quickly hid it with playful words and uplifting hand gestures, but there's no questioning it—

She was the knight who brought nightfall to Kawalerielki.

Talent 1: After dodging, the next attack hits twice and attacks multiple enemies equal to Block Count

Talent 2: When deployed, all [Kazimierz] operators gain a certain amount of Physical Dodge

Skill 1: Immediately gain a certain amount of DP and dodge the next Physical attack

Any new Vanguards introduced to the game face quite a daunting challenge:  How does an Operator tasked with the job of generating DP compete with the Bagpipe + Standard Bearer meta? For now the answer remains: it doesn't.  New Vanguards must provide some other utility/benefit other than DP generation speed/efficiency to find relevancy.  Flametail's attempt at distinguishing herself looks to be in the form of Dodge.

All of Flametail's Talents and Skills involve Dodge in some way.  Her Talent 1 hits twice and more targets after she successfully dodges, synergizing well with her other Talent and her Skills.  Her second Talent gives Physical Dodge to [Kazimierz] Operators (which will presumably include herself), the most notable of these being Blemishine and Gravel.  (reminder that Nearl is NOT part of the Kazimierz faction).

Skill 1 generates DP and Dodges the next physical attack. She'll be the first Vanguard of this Archetype to not have a generic "Charge γ" type Skill, but it still seems unlikely that this Skill will see much use.  Skill 2 is where it gets more interesting, dealing multi-hit multi-target damage with a Stun to nearby enemies, while giving nearby allies Physical Dodge. A skill like this could not only be useful against heavy early-stage rushes, but could also be useful later in stages with the Ally Dodge support.  S3 heavily bolsters her own presence, increasing her damage, block count, and both physical AND Arts Dodge.  This skill could provide a stronger "Guard" type presence for the DP Cost of a Vanguard while still generating DP.

As is fairly typical, the exact numbers will ultimately tell the tale of her impact, as well as the role that Dodge plays in the current and future meta. 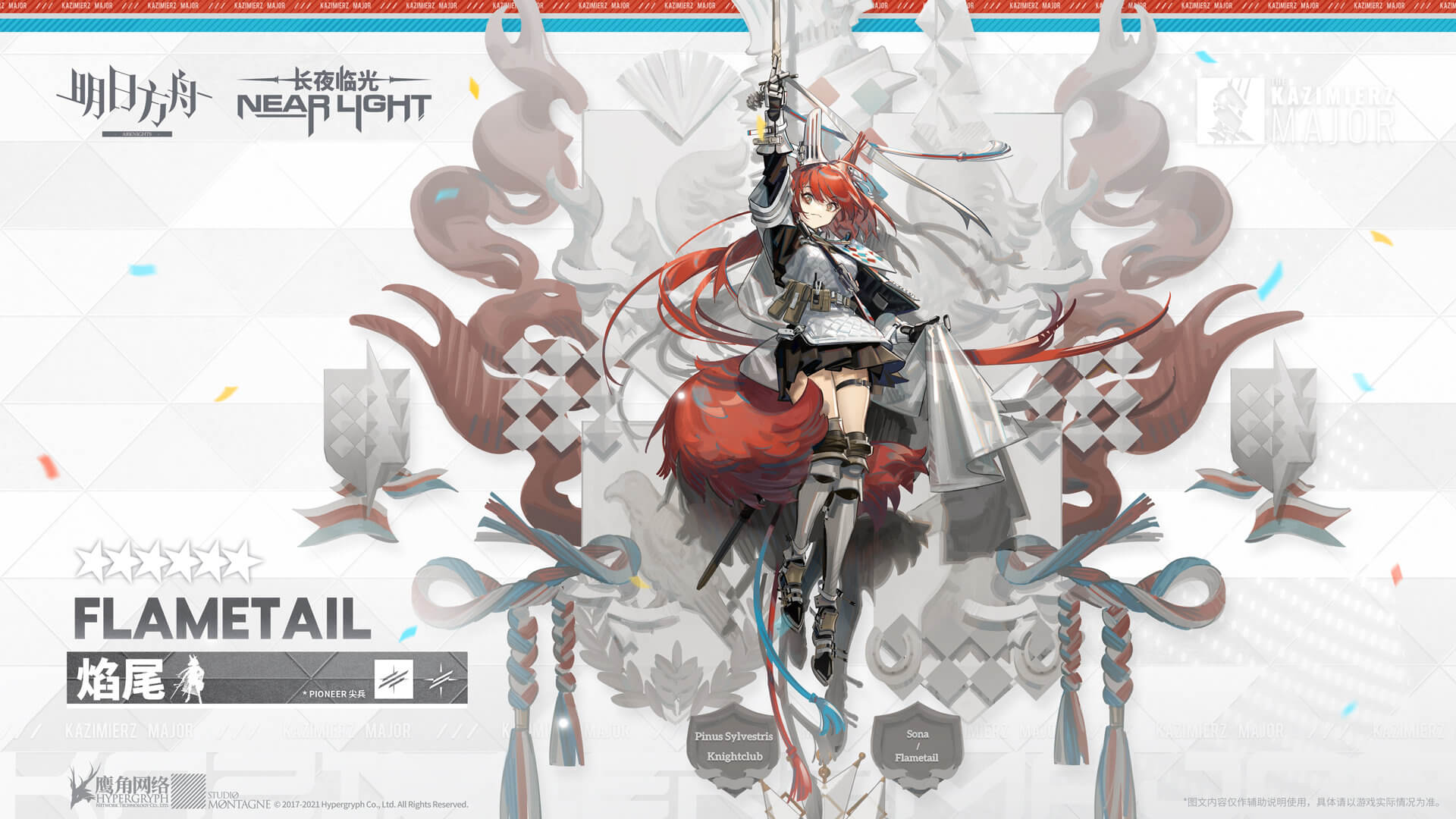