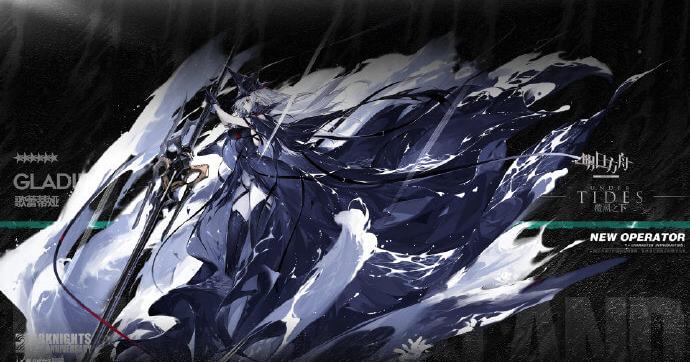 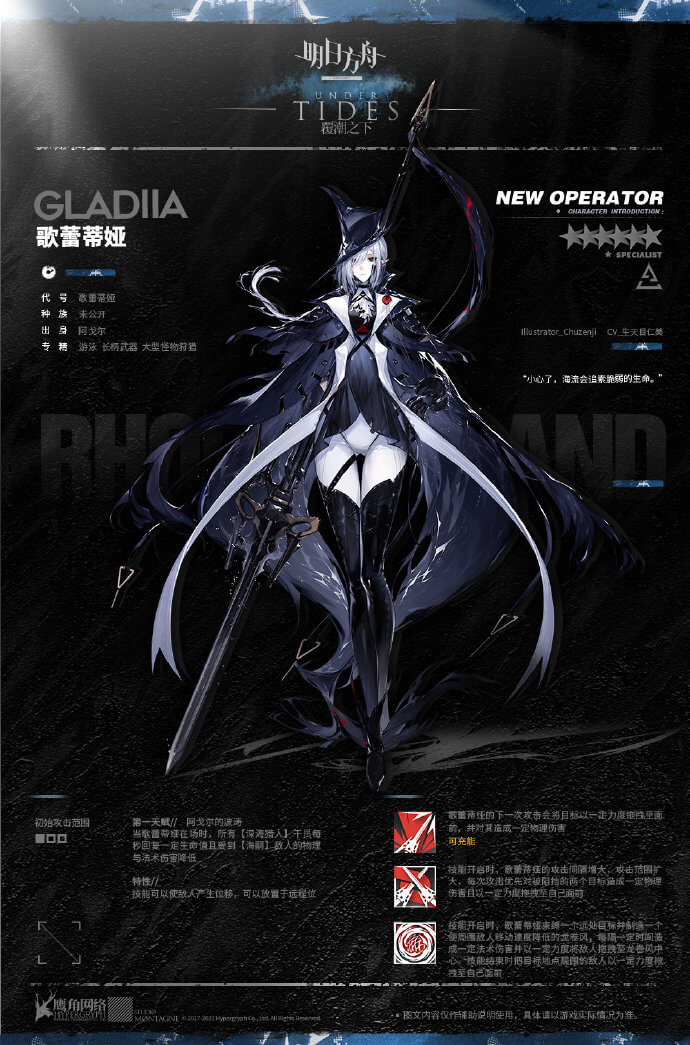 "Doctor, I am Gladiia, responsible for Aegir affairs on Rhodes Island. In the coming days, we will have may chances to work together, but nevertheless, please treat me as an outsider. I am not yet worthy of your trust.

[Gladiia] is a 6★ Puller Specialist  that restores HP to, and reduces damage taken by, Abyssal Hunter  Operators!  She comes with single target, multi-target, and AoE pulling Skills, with her S3 having a unique function and applying crowd control and dealing Arts Damage!

Trait: Can Shift enemies by using skills. Can be deployed on Ranged Grids

Talent 1: When in Squad, all [Abyssal Hunters] recover a percentage of their Max HP every second and receive reduced Physical and Arts damage from [Seaborn] enemies

Talent 2: Increase damage against enemies with 3 or less weight

Skill 1 - Waterless Parting of the Great Ocean: The next attack pulls the target towards self with certain force and deals a certain amount of Physical damage. Can hold charges

Skill 3 - Waterless Dance of Swirling Death: Inflict Bind to a faraway target and generate a Tornado centered on it. The Tornado inflicts -50% Movement Speed to nearby enemies, deals 130% Arts damage every 1.5 seconds and pulls the targets towards the center with medium force. When the skill ends, pull the targets towards self with large force

Gladiia with be a 6 Star Puller Specialist, obtainable free in the upcoming Under Tides event.  She will be the first 6 Star Operator given to players for free, and the first 6 Star of her Archetype. There isn't much doubt that Gladiia will be a cut above the other Puller Specialists.  Not only does she have the standard single-target Pull skill with S1, but her multi-target S2 also extends her Attack Range.

Her S3 is something completely new to the Pulling game.  It's an AoE pull centered on a distanced enemy that also Binds the target and Slows the others.  After a duration, those caught up in the tornado get pulled toward Gladiia.  The potential usefulness of a wide-area AoE pull seems obvious.  Less obvious is how useful the other mechanics will end up being, and if they will be useful enough to warrant her use outside of just pulling things into holes.

Her Abyssal Hunter  buff  will be welcome for those that use Skadi and Specter especially, but its severely narrow application will likely limit its strength for most players. 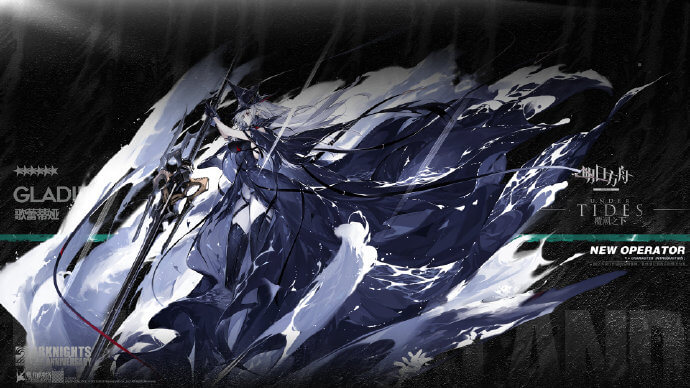 Arknights: Should You Pull? Joint Operation 6

Contingency Contract Season #9 [Operation Deepness] General Discussion
Seaborn will return again https://www.youtube.com/embed/iIrWzN2gLF0 CC9 Prep Sheet …
Who to pic out of the TOTP?
Hi, I’m a bit new to the game, I bought the TOTP from the store, but I’m not sure who…
Bored Doctor Chronicles #78 Peak Golden age and more AK anime hype
Let’s relish in the golden age. And gacha to our hearts content. Sauce (click for…
6* Operator Leveling Advice
I know that there are tier lists for Operators and Masteries already, but I wanted to…
Who to pic out of the TOTP
I have all other operators aside from these. Curious which I should go with out of the…
Read More