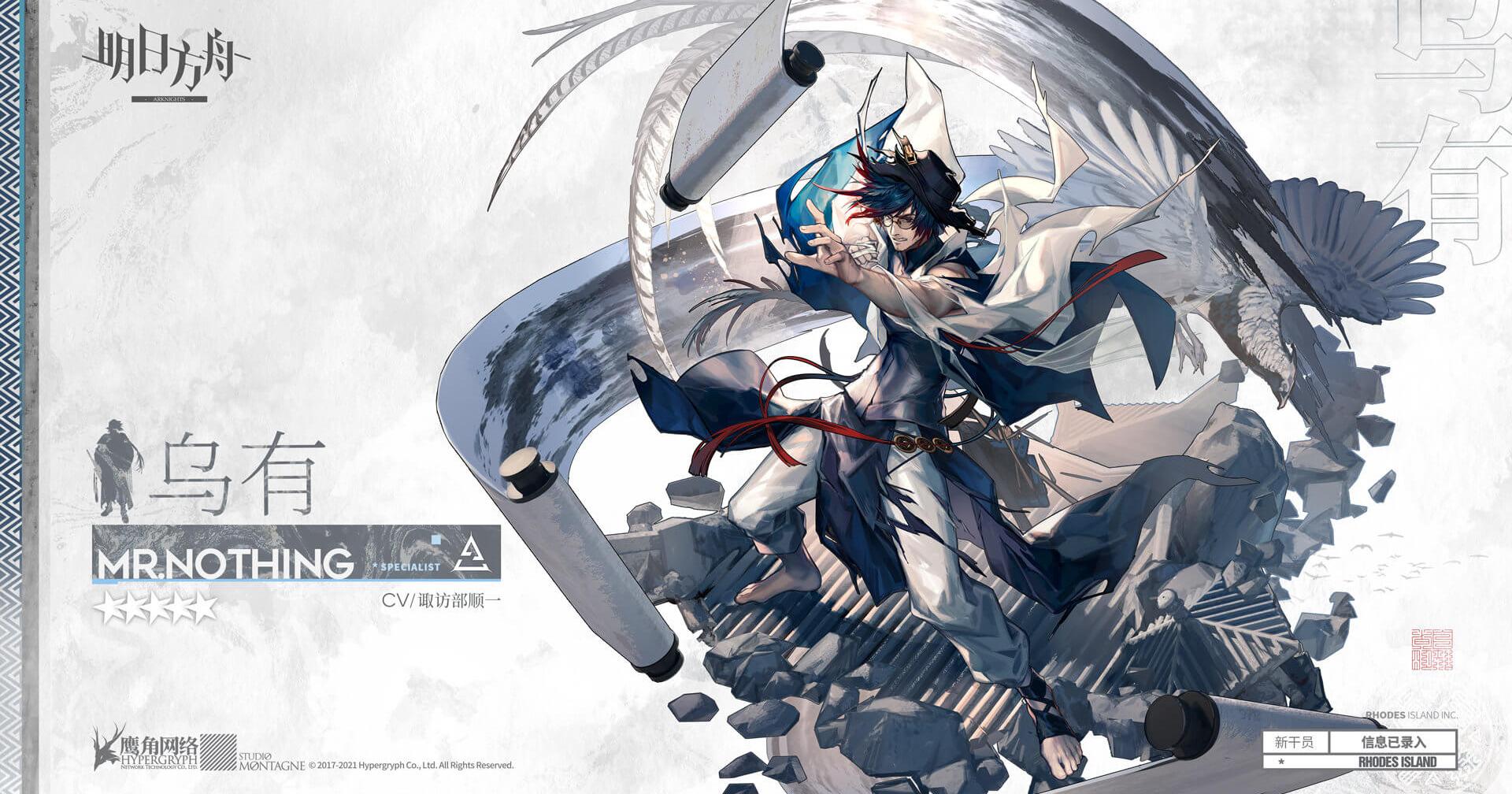 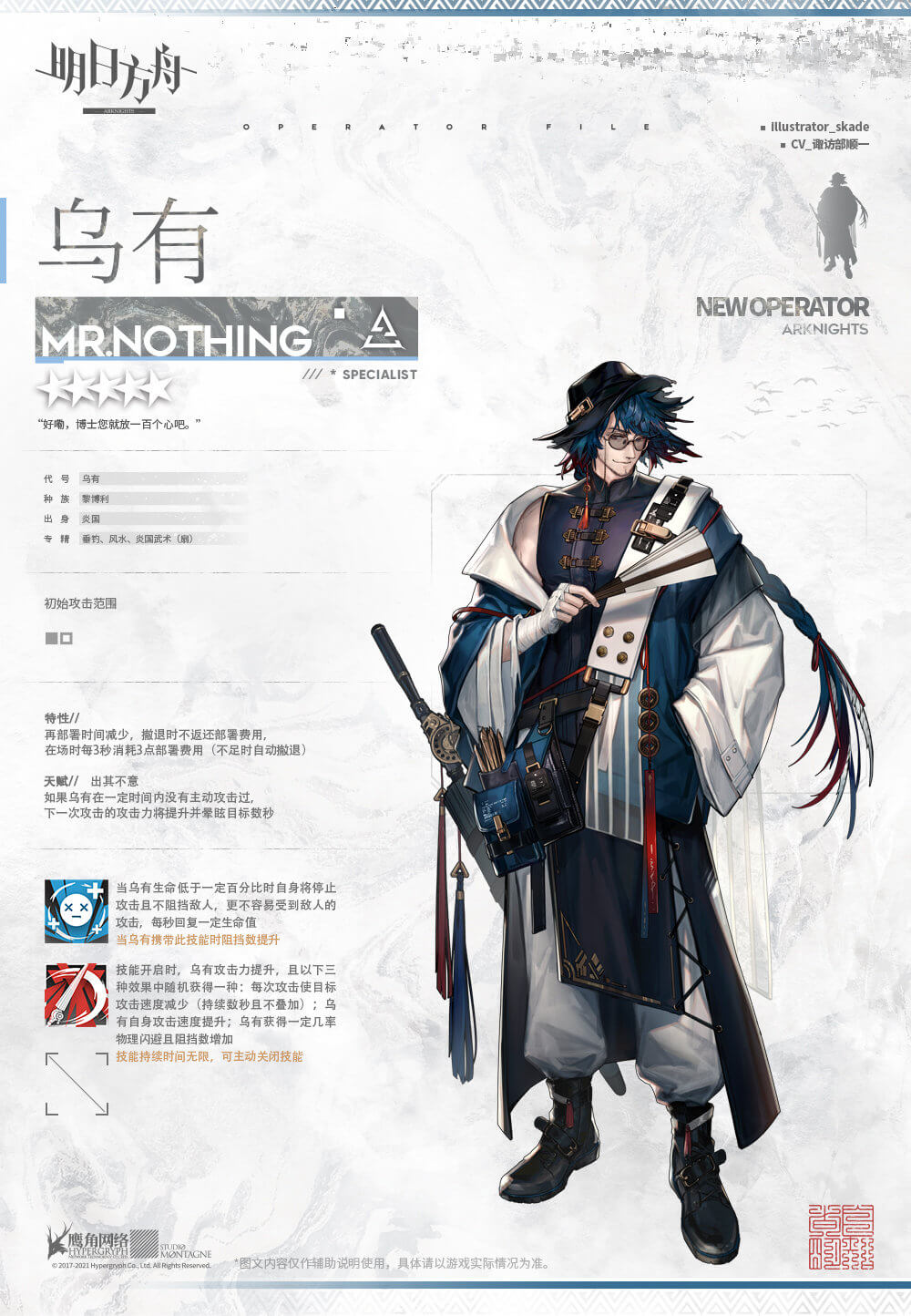 ""A callsign right? 'Nothing'. Nothing as in nothingness. You're the Doctor? So you're my new boss? Hey, do you need a back massage? A leg massage?"

Operator Mr. Nothing, born in Gowu City of Yen. He studied martial arts from an early age, but due to offending a local authority, he was forced into exile. He met Operator Lava by chance, and came to Rhodes Island for a job on his own accord.

From his own descriptions, Operator Mr. Nothing is experienced in fortune telling, cooking, acupuncture, massage, palm reading, and rice planting. He also knows some kung fu that isn't worth mentioning. He once tried to garner some extra income in Rhodes Island with his techniques, but unfortunately was shut down by Closure.

However, although Mr. Nothing isn't an Infected himself, he is often seen taking some young Oripathy patients to morning workouts on the bridge, teaching them martial arts. For his good intentions, let him off on that fraudulent "Secret Dormatory Feng Shui" book for now.

Mr.Nothing is a 5★ DP-Drain Specialist  that charges the power of his attacks when not attacking, and has Skills that can increase his blocking and survivability, reduce enemy ASPD, or increase his own ASPD.

Trait: Has reduced Redeployment Time, but DP Cost is not refunded upon retreating; While deployed, 3 DPare consumed every 3 seconds (automatically retreats without sufficient DP)

Talent: When not attacking for a certain period, increase the ATK of the next attack and Stun the target for several seconds

Skill 1: When this skill is equipped, increase Block Count. When HP is lower than a certain percentage, stop attacking enemies, reduce Block Count to 0, become less likely to be targeted by enemies and recover a certain amount of HP every second.

Skill 2: During skill activation, increase ATK and randomly gain one of the following effects:

Infinite duration, can manually turn off the skill.

Mr.Nothing is only the second DP-Drain Specialist to come to Arknights.  Jaye, the first of the Archetype, is considered to be a vey strong Operator for his rarity due to his ability to have a strong impact early in maps, and his strong and effective Skills.  Will Mr.Nothing succeed as well at his higher rarity?

His Talent follows a recent trend of "power up when not attacking" abilities that causes his next attack to be stronger and Stun when he hasn't attacked for a while. It doesn't jive directly with his Skills, but does give him a bonus if enemies are intermittent.

Skill 1 turns him into a very survivable staller, as it increases his Block Count (presumably to 2??), and when his HP falls below a certain threshold he stops blocking, heals himself, and becomes less likely to be attacked.

His second Skill is RNG based, with a random effect chosen between a survivable debuffer, increased DPSer, and survivable staller (much like his S1).

To be honest, I'm not exactly sure what to make of Mr.Nothing right off the bat.  Like Jaye, he will likely have low DP costs and high relative stats, allowing him to make a strong early-map impact.  His S1 and 1 of his S2 effects are focused on stalling, which isn't something a a lot of maps require, and on maps like limited DP generation where it can be useful are challenging to use DP-Drain Specialists because of their DP demands.  For the other S2 options, the ASPD debuff seems like it would be most useful in support or 1v1 survival, and the ASPD increase is a straightforward improvement to his damage.  The RNG nature of this skill along with the massively different roles the effects offer could make it a bit frustrating if a specific effect is desired.  However, it does appear that a player might be able to try getting the desired effect by turning off the Skill and waiting for it to recharge?

More than most Operators, I think we'll need to wait for the details and how he plays in practice to make a judgment. 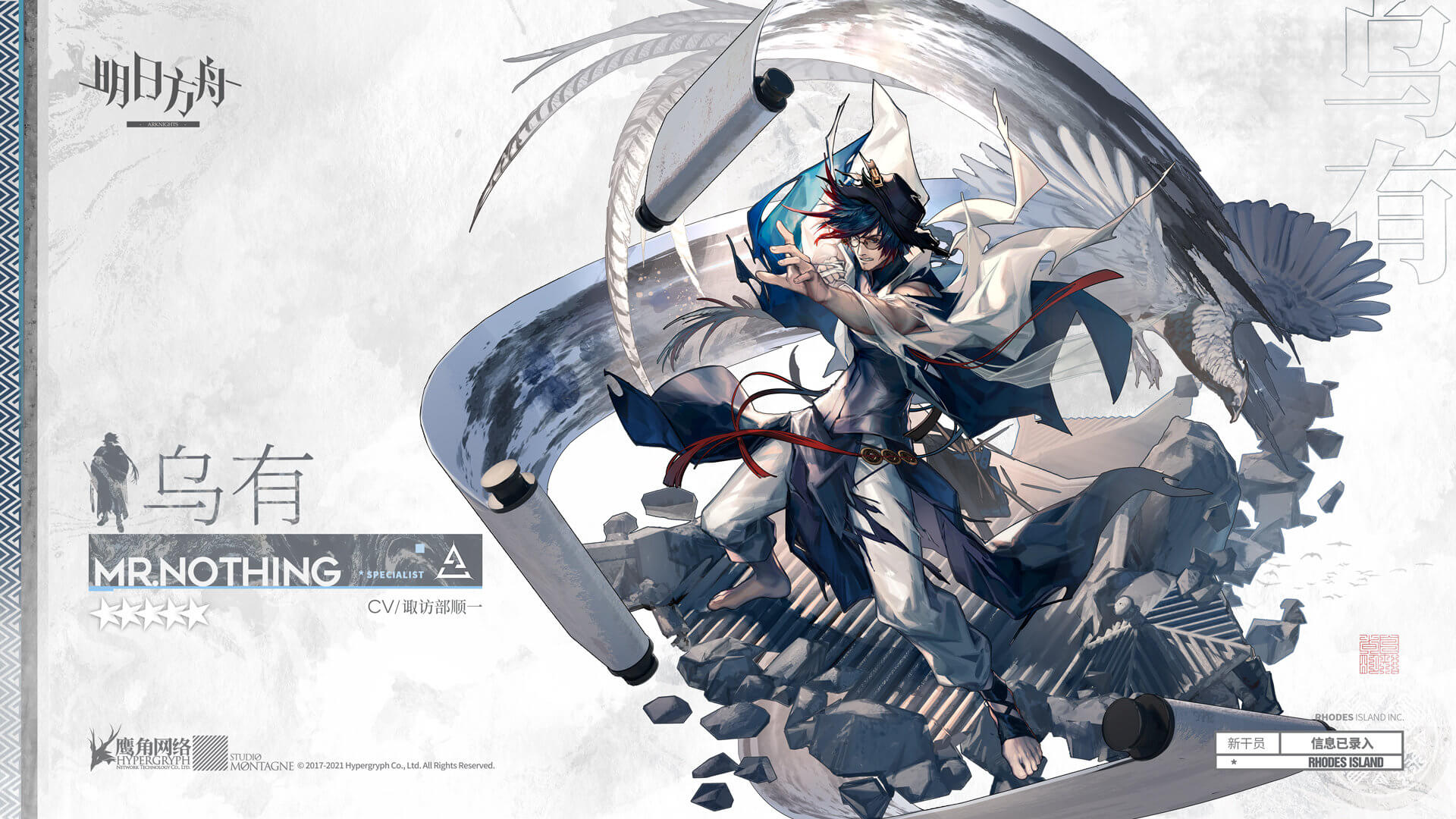 Operator Discussion: Purestream
At long last AK Global is finally getting Purestream, a 4* Thicc Wide-range Medic…
[Lore Discussion] Operator origin
A compilation of all current op place of birth, if there is someone missing please let…
How does damage work?
I’m asking about something specific here, but we’ll explore more of it later. I was…
[Lore Discussion] The reason why Alina must be a deer
The deer has a special symbolic meaning in both Western and Eastern cultures. So they…
So Buffs
Let’s be honest, not every Operator or even Archetype is created equal and there’s a…
Read More