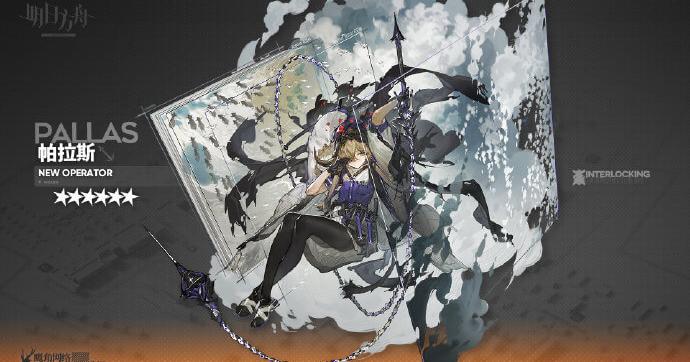 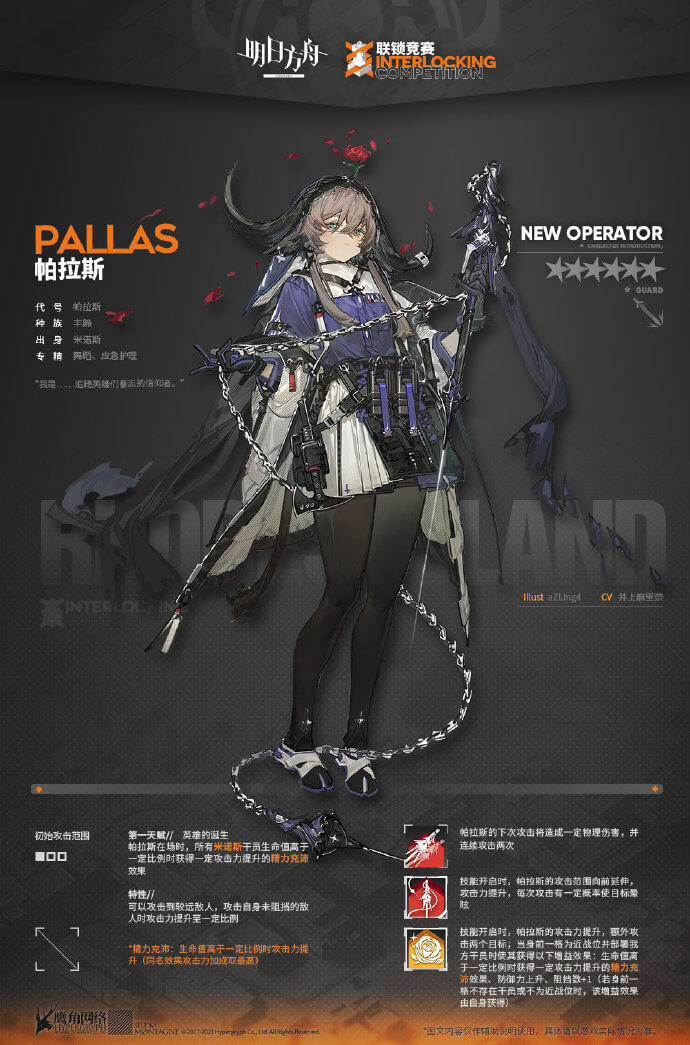 "I'm Pallas, a priestess from Minos, I will be resting at Rhodes Island for some time... Although I say that, I wish to be treated with fine wine and theatre plays, and the battlefield moreso."

Mysterious, dignified, calm, she seems to be an important priestess from Minos.

These impressions were turned on their heads within a week. Medical Operators spent unimaginable efforts bringing her from any place that stored alcohol back to her ward.

"Why... hic... must I stay here and drink alone? Battle... only in blood-boiling battles, the place where it's possible to defeat evil and become a hero, can compare to... hic... this wine!"

"If that's the case, Miss Pallas, after your illness stabilizes, will you become an Operator and fight for Rhodes Island?" T

he drunk priestess suddenly seemed to awaken, and looked with an expecting gaze.

As to what other secrets priestess Pallas holds, let's stay tuned.

Palls is a 6★ Support Guard that introduces the [Vigor] effect to augment her support capabilities.

Trait: Can attack enemies from range. When attacking enemies not blocked by self, increase ATK.

[Vigor]: When HP is above a certain pecentage, increase ATK (does not stack)

Skill 1: The next attack deals a certain amount of Physical damage and hits twice

Skill 2: Extend range forward. Increase ATK and every attack has a chance to Stun the target

Skill 3: Increase ATK and attack 2 additional enemies. When there is a melee allied operator in the tile ahead of self, grant the following effects to them: Gain a certain amount of [Vigor] ATK increase when HP is above a certain percentage; Increase DEF; Block Count +1 (If there is no ally ahead of self or if they are not a melee operator, grant the effect to self instead)

Support Guards have a reputation for being an underpowered Archetype, so it will be interesting to see if they can address the flaws with the first 6★. In the past, sometimes they have succeeded (Mountain), and sometimes they have failed (Passenger).

One immediately interesting thing is the addition of the self ATK buff against enemies she isn't blocking.  Traits are typically Archetype-defining, and the other current members of the Archetype do not have this as part of their Trait.  Perhaps the others will receive this as a buff as well?

The most notable addition to Pallas' kit is the new [Vigor] named effect, that increases the ATK of allies over a certain HP threshold. One of the biggest complaints of existing support guards is that the amount of support they are able to provide their allies is not enough to offset their own reduced performance output.  It will be interesting to see if [Vigor] can push those scales in her favor.  Keep in mind that [Vigor] is only applied by her Talent to Minos Operators (of which I believe she is the first), and by her S3.

S1 is a standard consistent damage skill that probably won't see much use.  S2 extends her range and gives her a Stun chance, so it could be useful in situations where you could use a long-rang melee crowd control, a function that isn't commonly provided.  S3 is clearly her most explosive skill, buffing her own damage and giving both offensive and defensive buffs to the Operator in front of her (or to herself if no frontline operator is present).

Ultimately, whether Pallas will truly be able to break the mold of this Archetype will depend on the exact numbers and her synergies with other existing powerful Operators. 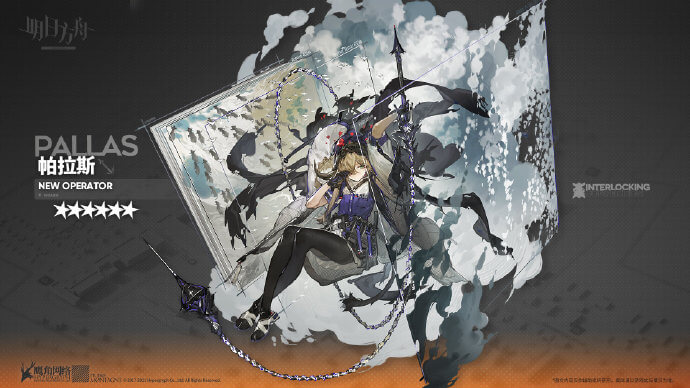