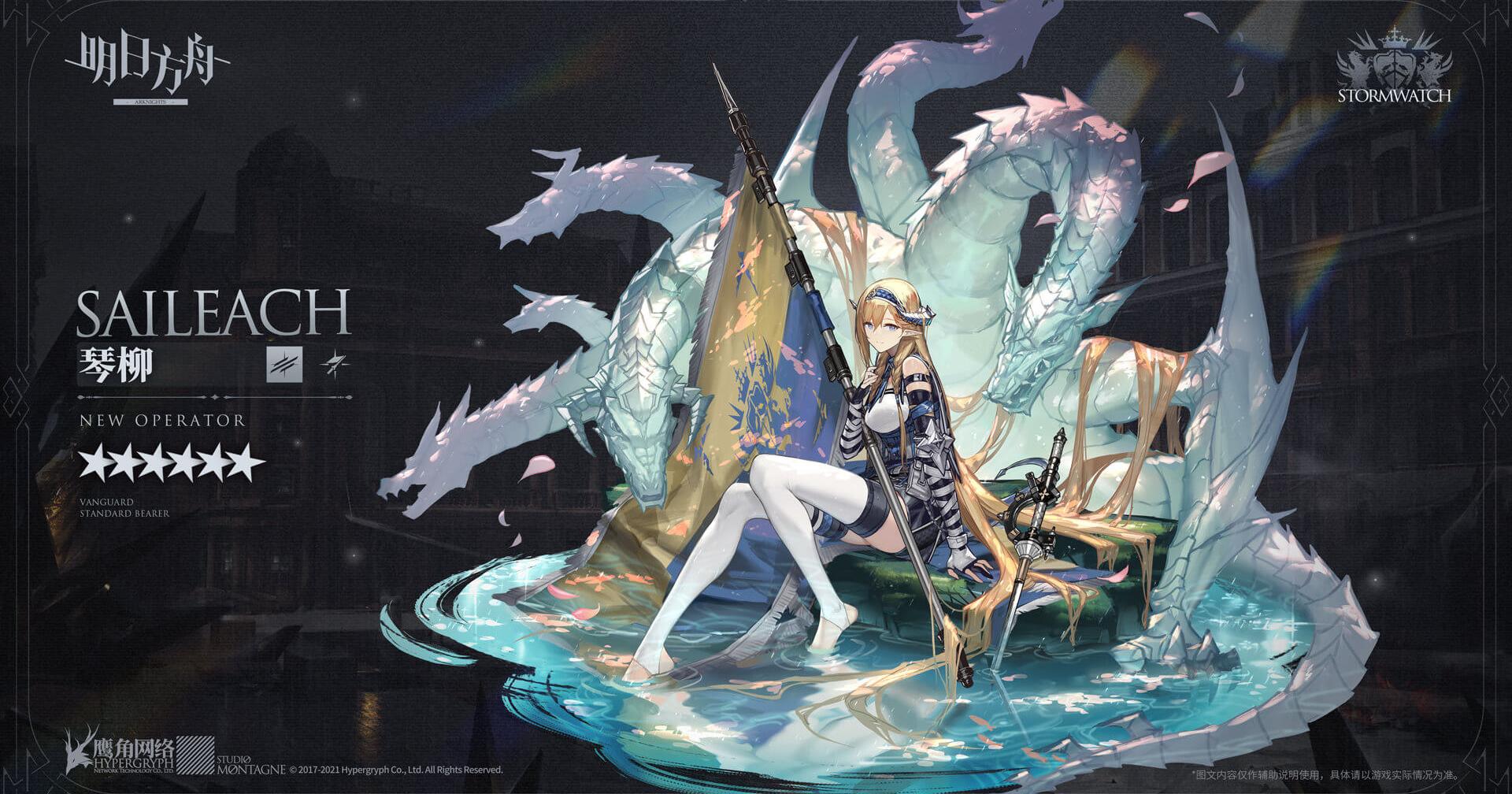 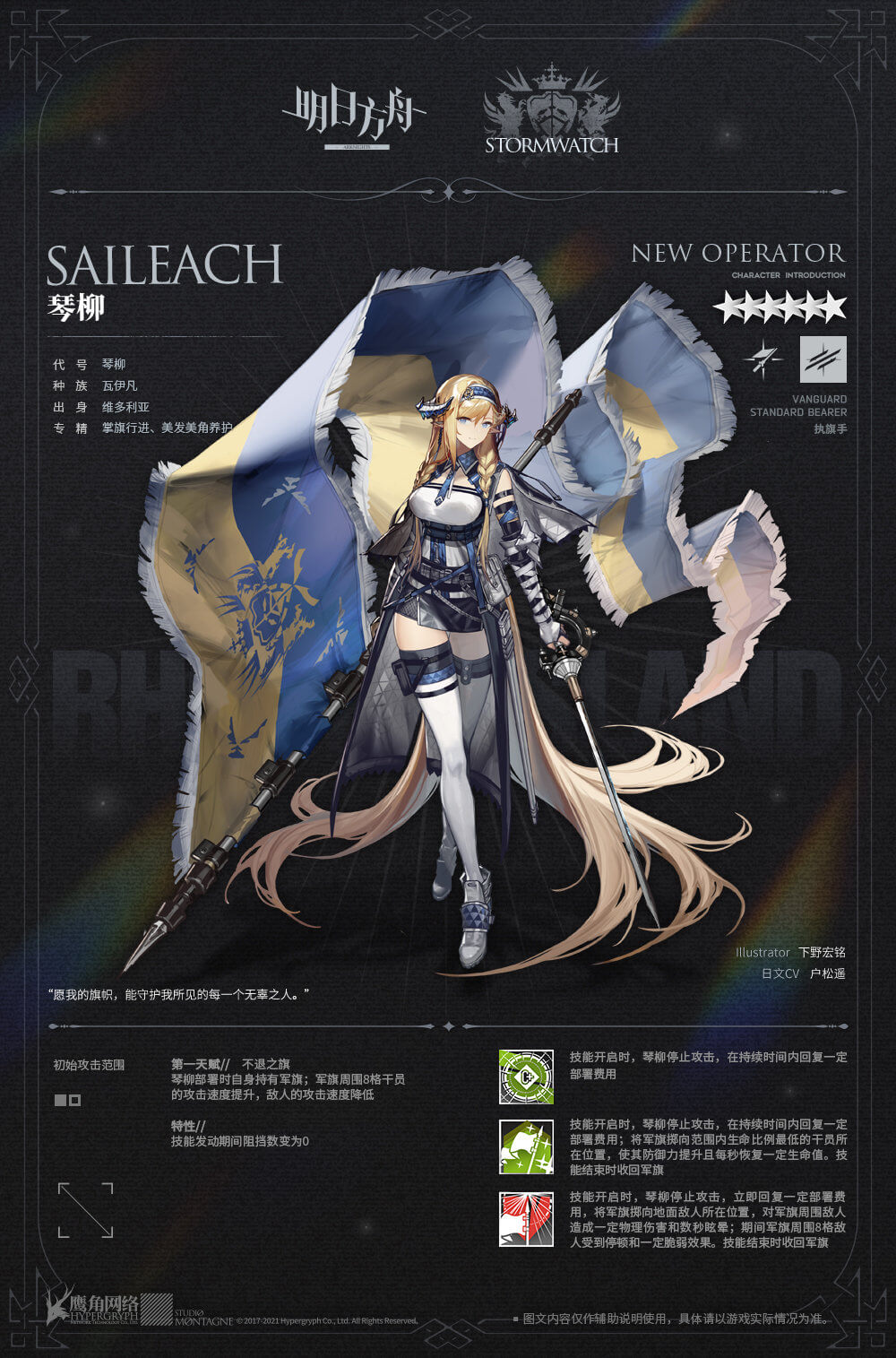 "You're the commander of Rhodes Island? Newcomer Saileach, reporting in!"

"...You're saying, that Vouivre girl from the city on the hill is here at Rhodes Island too? Eh, earlier than me too? I never imagined that we'd be comrades-in-arms again after all!

She's really cordial and good-hearted, and agreed to help us investigate Ghost Squad(!?) the moment we met. Even if back then she said she was only a ceremonial guard, but I could tell from one look that she'd become an outstanding soldier one day.

Does she miss home after leaving Victoria for so long? Shame, I've been so caught up on the way, I've got no gifts for her. I heard that she really liked novels, so I guess I'll try telling her about what I've seen on the road like it was from a book.

And, about that elegant Sankta lady... I've heard, what a pity. When we parted ways, I had hoped things would turn out differently. She's really chummy with that Vouivre girl, right? We few were supposed to be really good friends."

Saileach is a 6★ Standard Bearer Vanguard (Formerly known as Utility Vanguard) that can support her allies and hinder her enemies in addition to generating boatloads of DP!  She can heal her allies, and increase their ASPD and DEF.  For her enemies, she can Stun, Slow, reduce their ASPD, and inflict Fragile.

Talent 1: Saileach possesses an Ensign upon deployment; Within the 8 surrounding tiles of the Ensign, increase ally Operators' ASPD and reduce enemies' ASPD

Skill 1: Stops attacking and recovers a certain amount of DP within the skill duration

Skill 3: Stops attacking and immediately recovers a certain amount of DP. Throw the Ensign towards the location of a ground enemy, dealing Physical damage and Stunning them for several seconds; Within the skill duration, inflict Slow and Fragile to enemies within the 8 surrounding tiles of the Ensign. The Ensign is retrieved when the skill ends.

The first 6 Star Standard Bearer Vanguard arrives to join the ranks of Myrtle and Elysium.  Since this Archetype is so core to the DP generation meta, there is little doubt that Saileach will immediately emerge as a sought-after meta Operator.  The question is really not so much "will she be strong" but "how strong will she be"?

Her S1 is the standard DP generation skill, and is typically the most efficient DP generator of all the Skills.  Will it be better than Elysium's, though?  That isn't necessarily a guarantee.  If you look at the Skill-DP-Recovery Vanguards, S1 for the 6-stars Siege and Saga is exactly the SAME as the S1 for 5-stars like Texas and Zima.  So Saileach's differentiation may have to come from her abilities.  And since none of those abilities increase her DP generation, it is very possible that she will not represent an increase to DP generation capabilities.

As for her abilities, she has both ally-buffing and enemy-debuffing capabilities.  Her Talent increases ally ASPD and reduces enemy ASPD in the area around her Ensign.  This Ensign will be placed on her normally, but during Skill use it can be moved to an ally or enemy.  Thus, this Talent effect will move along with the Ensign.

Her S2 passes the Ensign to the ally within skill range with the lowest HP percentage, healing them over time and increasing their DEF.  The healing ability is similar to Myrtle's S2, with even more beneficial effects.  Her S3 throws the Ensign towards a melee enemy, Stunning them and then applying Slow and Fragile for the duration of the Skill.  This could be a strong option against early wave enemies, giving the player more time to deploy Operators and ease the handling of early enemies.

Regardless of the ability details, there is little doubt that Saileach will be strong and see a lot of usage, based on her Archetype alone.  HOW strong is what remains to be seen. 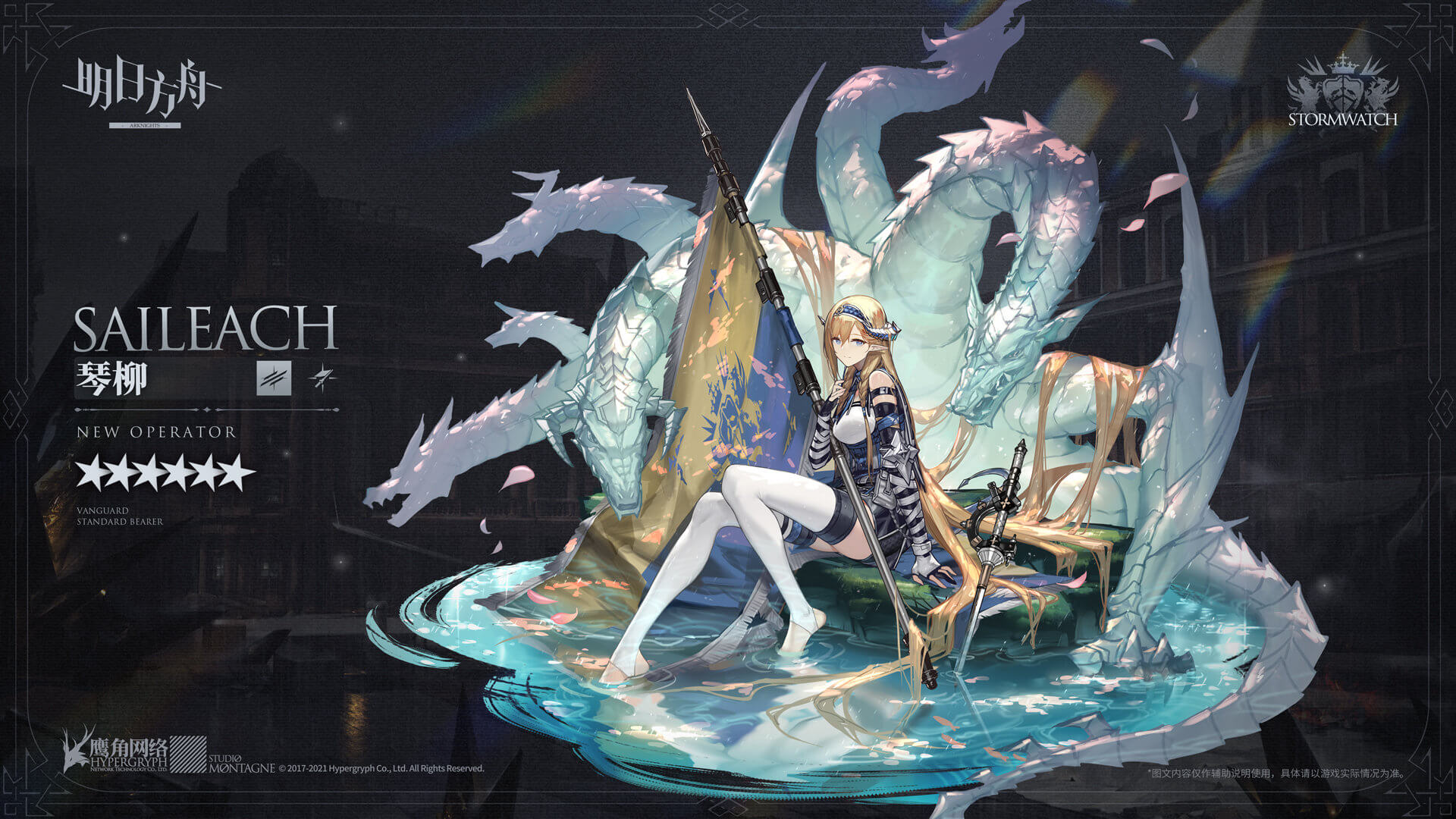