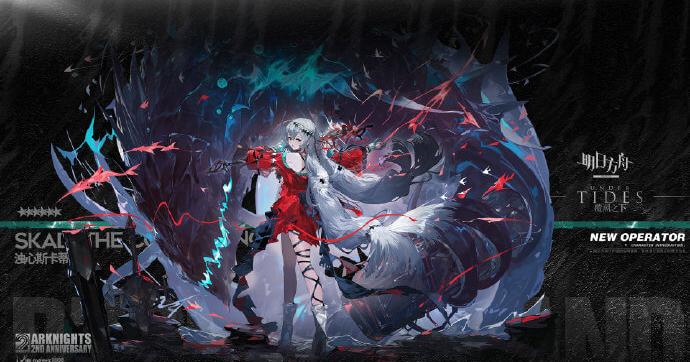 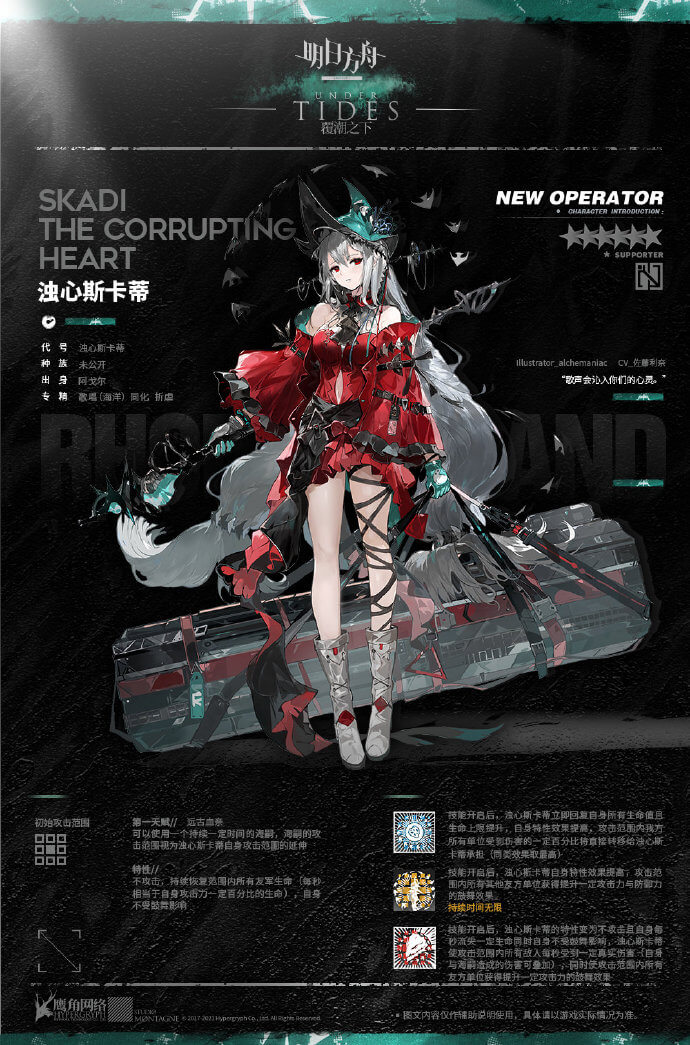 Quote: "The song will seep into your hearts."

I call it "The Corrupting Heart". It had Skadi's appearance, but it isn't her. Fate mocked the failure of our civilization with ruins, and now it made this organism appear before me, insulting our end.

No... I can't listen to it's "song". I'm numb to death, but this kind of biological threat that can easily change us still makes my heart palpitate.

This organism before me can rebuild me with its voice, and change me into its kin. But how could I come close to my nemesis. I cannot lose the last bit of esteem us humans have.

Singing, it extended its palm towards me, calm, yet its eyes reveal a blood-like thirst.

[Skadi The Corrupting Heart] is a 6★ Aura Supporter, only the second of her Archetype (the first being Sora), which means she'll grant HP regeneration to those within her range.  Her Talents allow her to summon a helper that buffs her and effectively extends her range.  Her Skills improve her healing, transfer damage from allies to herself, buff her allies' ATK and DEF, and deliver AoE True damage attacks.

Trait: Does not attack but continuously restores the HP of all allies within range (the HP restored per second is equal to 10% of this unit's ATK). Self unaffected by Inspire effects

Skill 1 - Chant of Returning by Varied Paths: Immediately increase Max HP and recover self to full HP. Increase Trait effect. A certain percentage of damage taken by allies within Attack Range is directly shifted to Skadi (Only strongest effect is applied)

Skill 2 - Wish of Burial Beyond the Light: All allies within Attack Range gain [Inspire] effect equal to a percentage of Skadi's ATK and DEF. Increase Trait effect. Infinite duration.

[Skadi The Corrupting Heart] will be only the 2nd Aura Supporter (the first being Sora), and the first at the 6 Star rarity.  Thus, like Sora, she will grant HP regeneration to allies within her range, including those that can't be healed directly (like Enmity Operators and Summons).  The unique Attack Range of this Archetype

can be either a blessing or a curse, depending on your deployment needs, but Skadi TCH has a way to break the curse: Her Talent allows her to Summon a [Seaborn], and its Attack Range is considered an extenstion of Skadi's.

Her Skill 1 has an AoE Damage Transfer effect, transferring damage from allies to herself while also increasing her own HP and healing output. This Skill could be useful from a survivability perspective, however, outlasting and mitigating heavy damage phases is not a common strategy in current meta.

Skill 2 will be the second instance of the newly named [Inspire] effect, which in this case transfers some of Skadi's ATK an DEF to her allies (note that Sora's S2 transferred ATK).  This skill also increases her healing output, and since it has infinite duration, acts as a permanent buff to Skadi TCH and all allies in her range.  A permenant buff and constant steady HP regeneration could be an interesting addition to consistent damage output/intake scenarios, especially in cases where heavy direct healing isn't needed.  And ATK buff sources are always welcome, if nothing else, for the memes.

Skill 3 gives her an enemy-attacking option, something Sora lacks. She loses HP while it is active, but in return does AoE True damage to all enemies within her range, with damage stacking if an enemy is in range of both her and her summon.  The damage is based on her ATK stat, which, unfortunately for Aura Supporters, is not very high, but the Skill makes up for this by granting an ATK boost to all allies within her range as well. It seems like this could be a great skill for amplifying burst-damage phases and burst Skills of other Operators

Overall, [Skadi The Corrupting Heart] seems like an interesting addition to the Archetype that will be more widely applicable than her 5 Star counterpart, though if she'll make much meta impact or not remains to be seen. 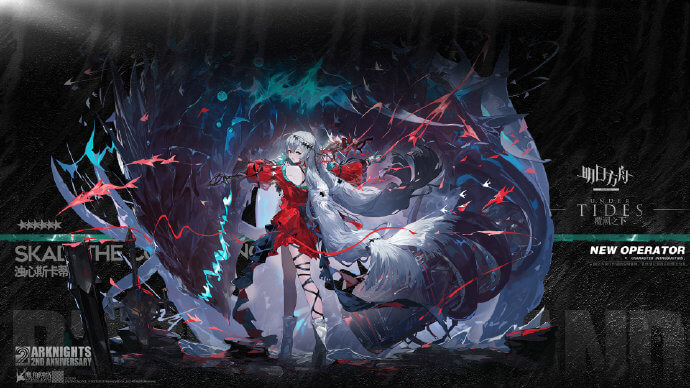