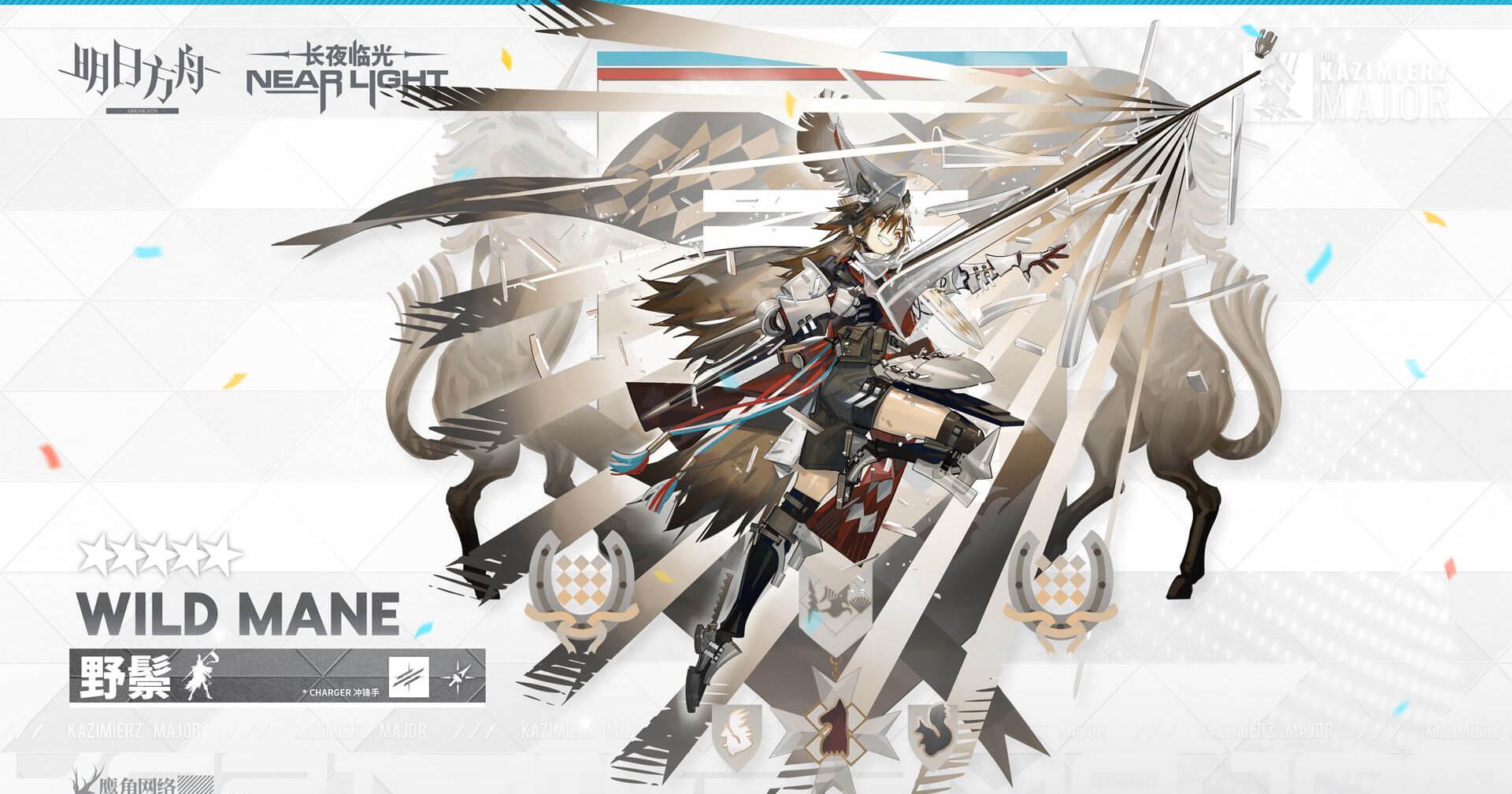 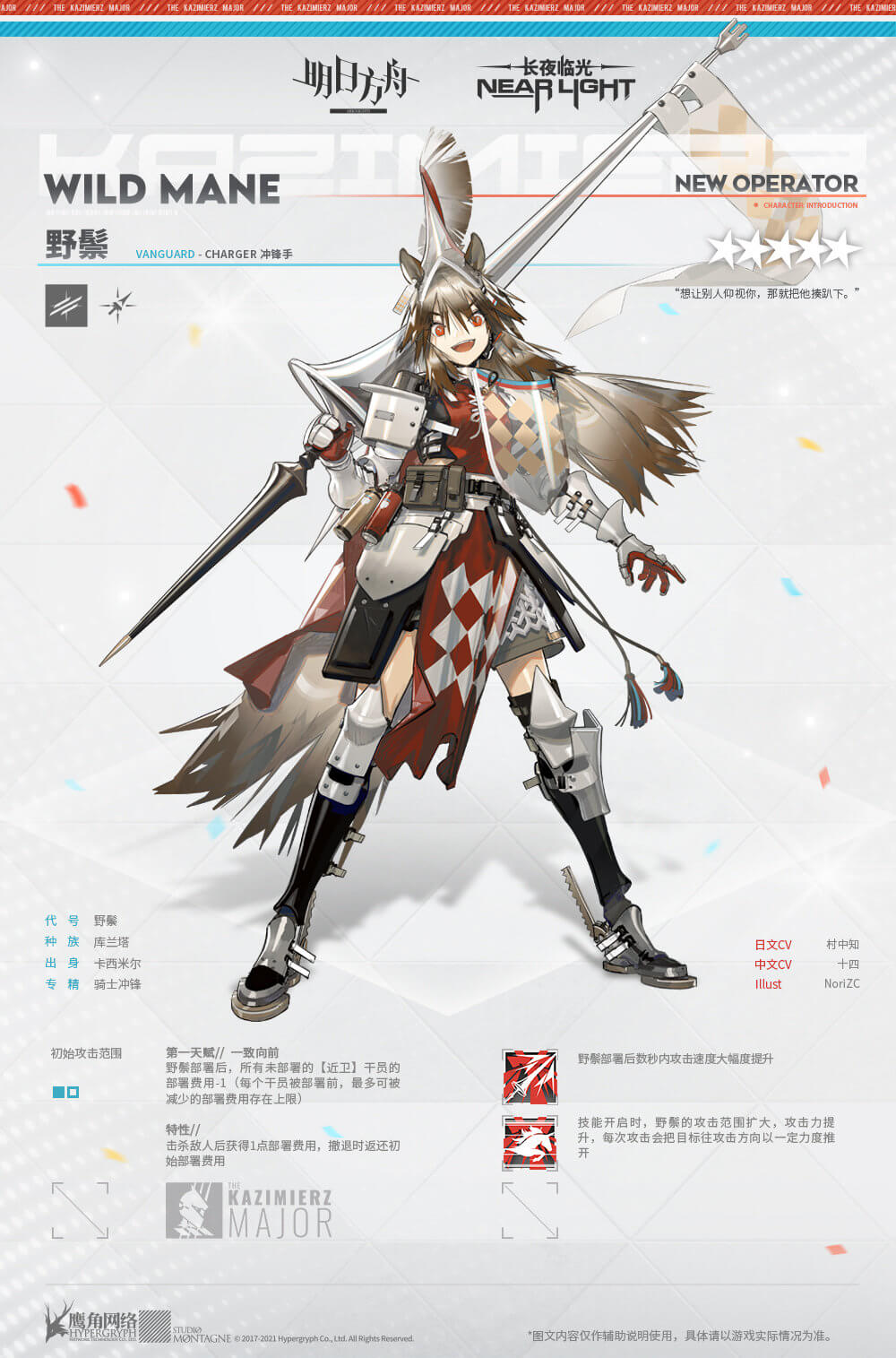 " 'Wildmane' Ivona, of the Pinus Sylvestris Knight Club. Sona said that this place is friendly to the infected? Good."

'Wildmane' Knight Ivona, the finest of the infected competitive knights, excitedly puts down her signature on the operator contract.

She loves gold with a passion - any object with that golden gleam gets her attention easily. Trophies, ribbons, the coloured confetti falling down from above... the arena of Kazimierz should have exploded in ovation and cheering at the sight of her victory.

Yet she requires so few of these exclamations. Being one of the infected would mean that you were destined to have few advocates. But Wildmane cares little. For her, victory itself is golden. The stronger the opponent, the more worthwhile the battle. Even if the day would come where she faces a battle she cannot win, she would not hesitate to fight until the very end for the sake of her companions.

After all, the essence of the souls that are exalted, that strike reverence into the heart of all who bear witness to their visage - is golden.

Wild Mane is a 5★ Charger Vanguard (former Archetype name DP-On-Kill) that will be the welfare Operator in the [Near Light] Event..  She lowers the DP Cost of [Guard]s and can Push enemies!

Trait: Obtain 1 DP after this unit defeats an enemy; Refunds the original DP Cost when retreated

Talent 1: After deployment, all undeployed [Guard] operators have -1 DP cost (There is limit to the maximum DP cost reduction before deployment)

Skill 2: Increase Attack Range and ATK. Attacks push the target away with a certain force

Being a new Vanguard is no easy task in the current state of Arknights, as the meta is so completely dominated by the Bagpipe + Standard Bearer combo. Wild Mane attempts to carve her niche by lowering the DP Costs of [Guard]s by 1 when she is deployed.  This alone will not be enough to unseat the current queen, so the question becomes, will her skills make a case for bringing her along as well?

Her S1 is geared around heli- drop use, since she gets a burst of ASPD on deploy.  Charger Vanguards (formerly called DP-On-Kill) are often used in this way, and this is the first skill in the Archetype that is specifically activated immediately on deploy.  Since it only increases ASPD and not ATK, she will likely have troubles against enemies with medium to high DEF.  It seems unlikely that she'll be able to compete with much higher ATK values of Bagpipe or Vigna in this role, even though the latter have longer Skill charge times after deploy, And if a heli-drop is needed where the DP Cost/refund/reduction of the Archetype isn't needed, then there are clearly better choices.

Her S2 increases her range and ATK and adds a Push.  Whether a Push skill can be relevant or not is highly dependent on the force and frequency with which it can be applied.  Most push skills outside of Shift classes end up being gimmicky and rarely useful or preferred, but there are some exceptions, and having shift operators that are not Specialists can potentially see use in Class Ban challenges.  It is impossible to say for sure if this particular skill can find use until we know the details.

Overall, with Bagpipe as queen of the Archetype, and not much in the kit that makes her a clear standout, it seems unlikely she'll have much of a meta impact. 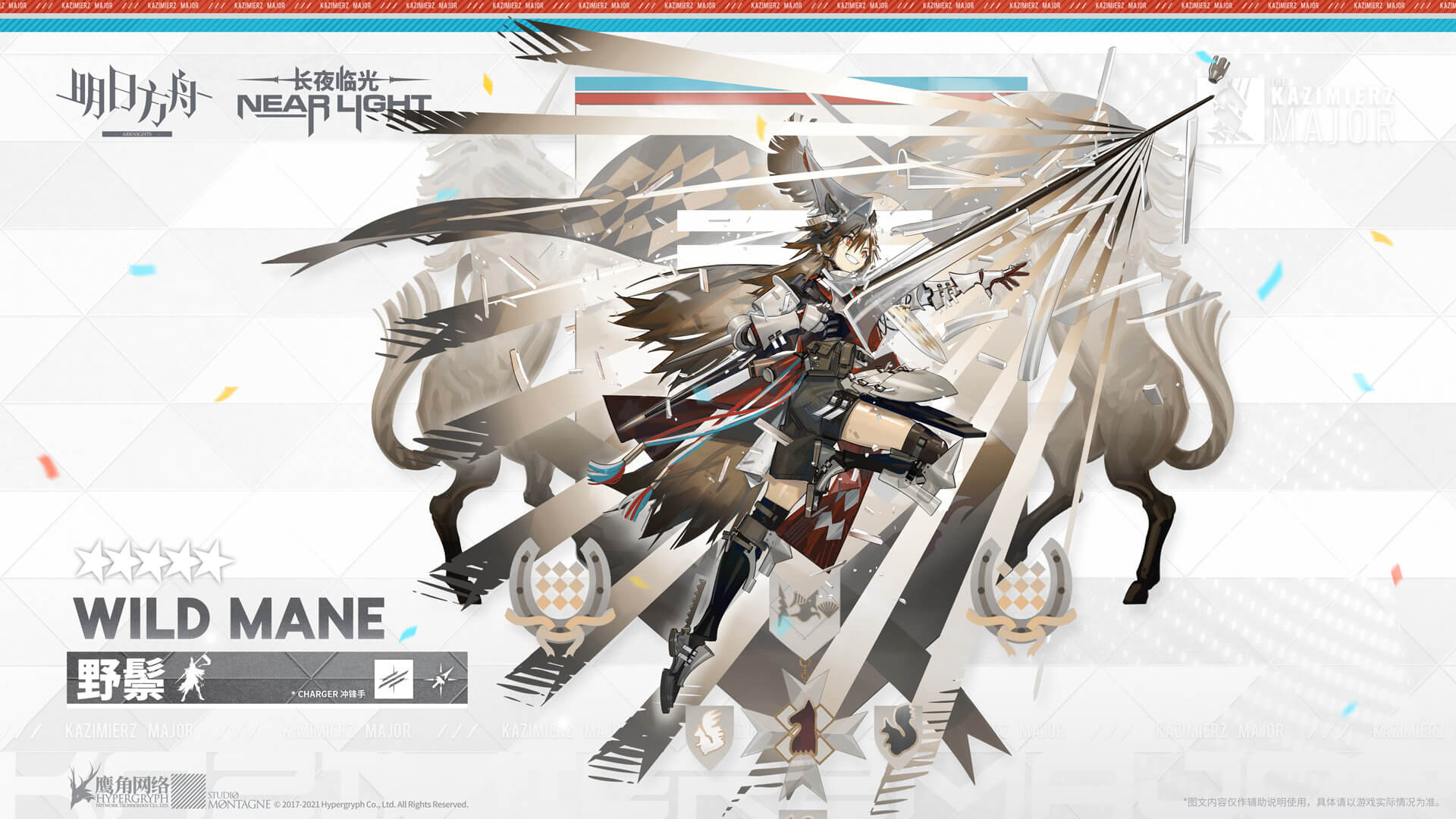