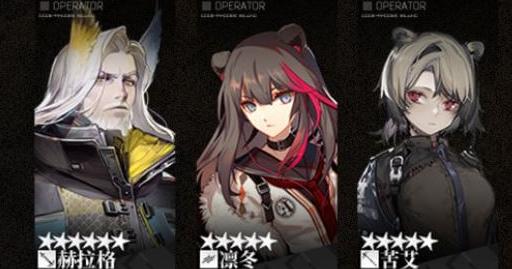 Until Spring Arrives
A city reaches zero in winter. The survivors walk out of the snowy field, believing that they can protect more people next time.

Chatlog 1
Absinthe: Ah, General Hellagur.
Zima: …General?
Hellagur: Haha, it seems that this name has spread?
I used to be a soldier of Ursus in the past. Now I am just a warrior who listens to orders from Rhodes Island.
Zima: (footsteps)
Absinthe: Eh, wait up… Zima, where are you going?
…Sorry, she probably didn’t want to be hearing about Ursus, even if some time had passed.
Hellagur: Is she also from Peterheim High School? The school that you said that Reunion’s ‘Captain’ wanted to protect.
Absinthe: Yes… Ah, please, please don’t sigh.
Hellagur: People like us, if we did not protect the children properly, will always feel some regret.
Fortunately, you look like you get along. There are a few students of your age on this ship, and there are even fewer Ursusians.
Absinthe: Getting along? … It’s not too bad.
At least after approaching them, I don’t suspect them so much… whether a lot of things were worth it or not.
Absinthe: Ah, I’ll go find Zima and check on her.

Chatlog 2
t/n: The ‘winter’ thing is the meaning of Zima in Russian.
Zima: I’ve said before, don’t keep staring at me. Don’t you just want me to protect you just like how I protect the rest of the Self Governing Group? I’ve already promised before.
Absinthe: No, even if I didn’t want your protection in the first place, even if you’re the ‘General Winter’ who protects the weak, I’m not considered weak.
…Ah, I know, ‘General Winter’. You just met a real Ursusian general, so you excused yourself?
Zima: …No.
Don’t get me wrong. I just don’t want to look bad. This title was not given by myself.
But, in the future, I will get military exploits, promotions, and receive ribbons. Even if not in Ursus…
Absinthe: Anyway, General Hellagur seems to have mentioned before, he keeps some Ursus military medals with him.
Zima: He still brings it with him? Was that battle so important to him?
Absinthe: He never mentioned his past. I am not sure which battles he got those medals from.
But according to what he said, he tried his best to collect things that he could sell for money, when bringing the children out of Chernobog.
If he could not work well with Rhodes Island, he could find another alternative.
Zima: Huh? He wants to sell military medals?
Absinthe: Mmm, he says that the children of the clinic need medication and heating during winter, not his past.
Zima: …When I was there, I never heard of a clinic that takes in Infected children.
Hellagur: That’s good. This means that you and the children of the clinic were once lived in a safe environment.
Zima: Ah, old man—I mean, General Hellagur.
It ‘used’ to be safe. But now there’s nothing left. Don’t mention it.

Chatlog 3
Zima: The ribbon of an Ursusian General, let me see… Uh, can I… please?
Hellagur: Of course. It has already left Ursus. It is just an ordinary ribbon.
I heard that ‘General’ is no longer a compliment for the young people.
Absinthe: It’s just that the military never stabilised the situation in the end. So everyone was very disappointed.
Zima: To be honest, people did not trust the military so much last time.
But whatever. I liked the nickname they gave me.
…I know I’m far from being a real general. You can look down on me.
However, I will protect the others from the Self Governing Group and beat up all obstacles in front of me. This is not a lie.
Hellagur: If you like this title so much, of course you can take this ribbon.
But it has been broken into two during the war, so it has no value. Maybe I should give a better present.
Zima: Th—That book. Istina says you wrote book. We want to see it.
Hellagur: The book that I wrote? It is just a book about the past. Nothing much to read.
Maybe there are books about the future. I’ll find them for you all.
Want a candy? I brought some with me.
Zima: …No, I don’t like sweets.
Absinthe: …Me too.
Hellagur: Don’t need to feel guilty over sweetness, you all are still children.
Winters in Ursus are very long, and very cold. But we endure winter for the days when the snow melts.