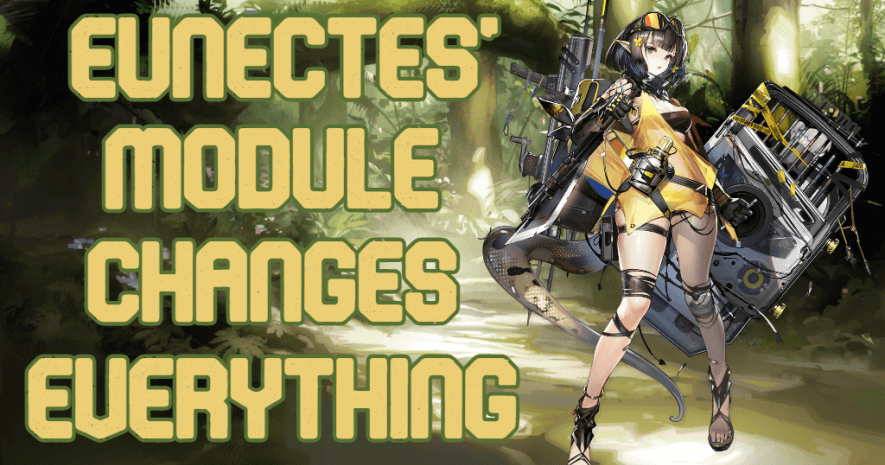 With the release of the 3rd Anniversary celebration event, Stultifera Navis, Duelist Defenders were one of the three archetypes that received new Modules to boost their combat performance.

Unlike other module batches, all members of the archetype received the same Module effect, differing only in the bonus stats. Both Eunectes and Aurora now have a 0.2 SP per second skill recovery while they are not blocking enemies.

This is the first attempt at addressing one of the major issues that these Operators had: their Trait that only allows them to gain SP while blocking. Since their Attack stat is quite massive and they have a 1-tile range, these Operators would often kill enemies too quickly to actually start blocking them, making it difficult for  them to gain any SP. This was especially a problem for Eunectes. With the release of this Module, Eunectes no longer has to be placed in obtuse ways for her to charge her powerful skills.

This SP gain effect by itself would be considered quite decent, but still not noteworthy enough to turn Eunectes into the powerhouse she could be. However, this Module has an extra side-effect, not mentioned in the actual upgrade but perhaps more important than the effect itself.

During regular gameplay, both Eunectes and Aurora are special in that they enter an SP Lockout-like state while they are not blocking, where they are unable to gain SP by any means. This effectively rules out any SP-charging strategies that could make them decently powerful Operators, such as boosting their SP with Ptilopsis aura Talent, or granting extra SP through Saria, Saga, Liskarm or Warfarin’s Talents.

Notice how the last slug is blocked before dying, thus deactivating Eunectes’ SP Lockout for a split second.

Thanks to this new Module, however, neither of them have any offskill SP Lockout, meaning they can both be boosted by the aforementioned Operators. This will heavily boost their combat performance, particularly Eunectes, by allowing her to get charged via Liskarm or Warfarin Talent activations.

Ptilopsis will also be able to boost their SP charge, but due to the inconsistencies with the internal game data (particularly concerning Eunectes’ Talent) it will give her 0.3 SP per second instead of stacking additively (like she does with Vermeil or Pinecone).

This strange behavior has the potential to make Eunectes into an actual powerhouse with better SP management techniques, since her incredibly powerful Iron Will is currently massively held back by the strange SP quirks of the archetype.

Still, it remains to be seen if this will have any actual applications in practice, as the boost in uptime isn’t excellent and still largely enemy-dependent. Hypergryph hasn’t released any statement regarding this quirk either, so for all we know this could be unintended behaviour and patched out in the future (hopefully not!).