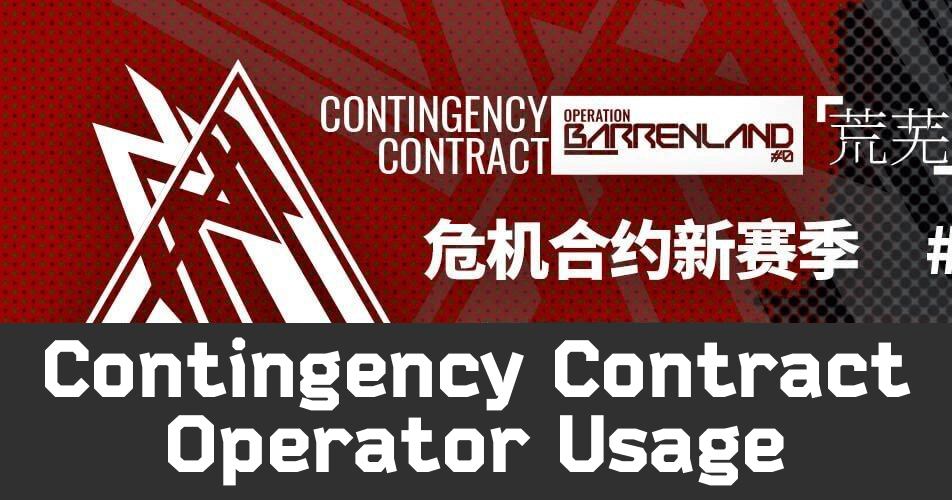 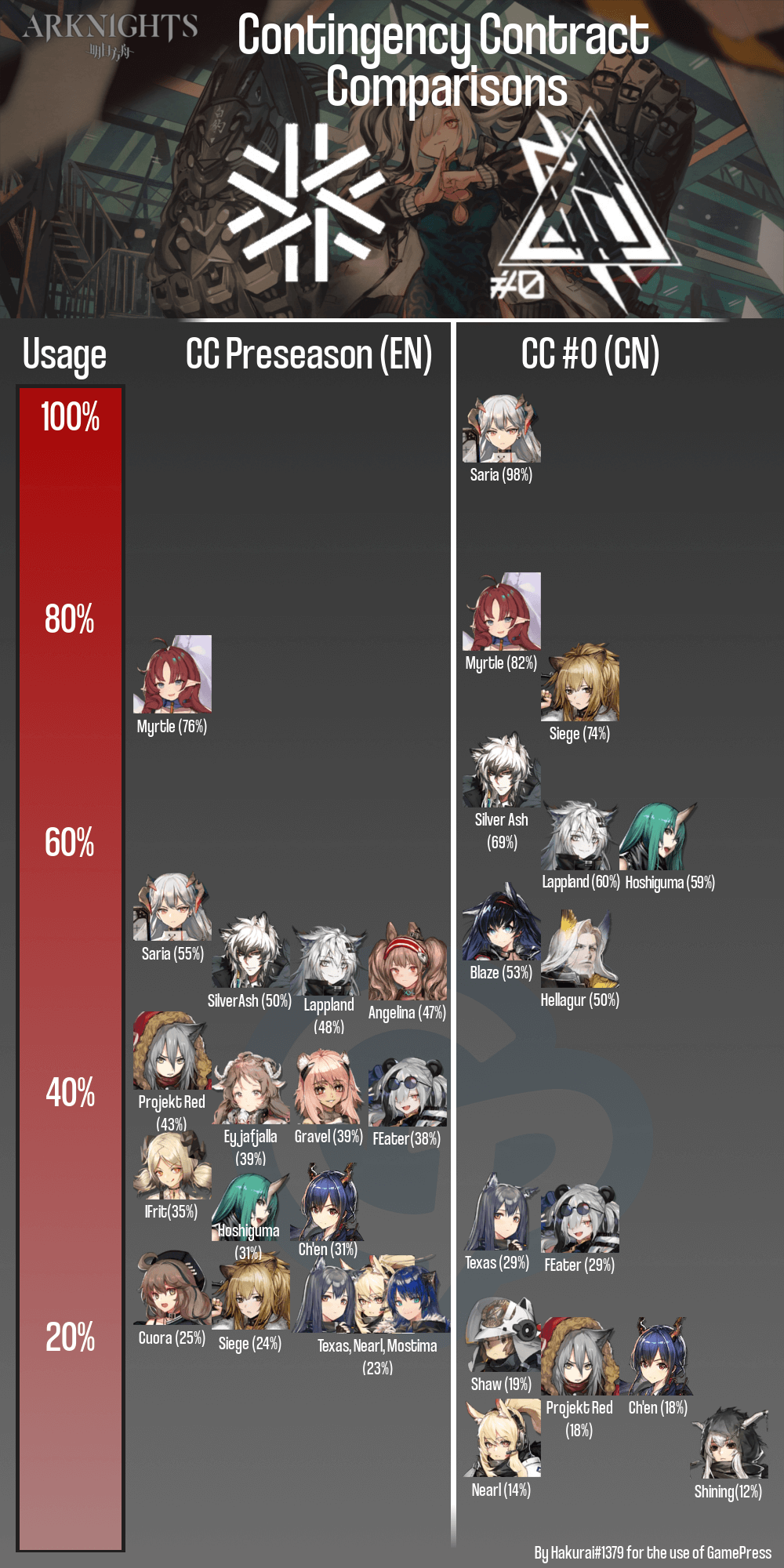 Disclaimer: The CN information was sourced from the reddit CN Operator usage graph from /u/sheimin (who in turn based it on a poll translated by /u/myrebo1995.  Meanwhile, the EN graph was sourced from our own on-site poll.  Do note that these are the operators used for Risk 18 clears on the permanent maps, which is not representative for the entire event in general due to map and risk variance.

CN Notes: With very high pick rates centering around a few choice Operators, the CN meta for CC#0 appears to be well defined.  Saria has almost universal usage, with steep drop in brackets from 50 to roughly 30% usage, and another drop at the 10% bracket.  This could be explained by the dissemination of optimal strategies and people following them verbatim.

EN Notes: The EN meta for CC Preseason seems to have a greater variety of commonly used units, but keep in mind that this is for a different CC.  The usage curve among operators is also more gradual than CN, with the greatest gap from Myrtle to Saria and less percentages next to others.

When unit slots are at a premium due to various deployment restrictions, serving as both healer and defender make Healing Defenders extremely versatile.  Of this archetype, Saria is the most commonly used due to her strong healing power and 6* stats allowing her to act as a competent Medic and Defender.  Nearl is used, but to a lesser extent due to her lesser healing and defense.

It's Guardknights all the way down.

SilverAsh: The famous True Silver Schwing speaks for itself in terms of clearing enemies and content.  In CC#0 his ability to deny stealth is invaluable for certain strategies.

Hellagur: Despite a relatively low 17% usage on EN, Hellagur had almost 50% usage on CC0/CN.  His self sufficiency in holding down a lane and built-in healing allows for more flexible placement and strategies, like fighting Casters and surviving.

Myrtle: Myrtle has the highest DP generation of all current vanguards and excellent healing utility.  Her low cost and easy potentials makes her one of the most valuable vanguards for challenging content.

Texas: Texas had similar usage on both CN and EN, at 28% and 23% respectively.  Her AoE stun is effective in both stalling enemies and generating DP.

Hoshiguma: With her high Defender stats, dodge passive, and ability to deal back damage to multiple enemies, Hoshiguma is an extremely efficient normal defender.  In comparison, Nian's much lower usage could be attributed to lesser retaliation damage and niche utility not being as applicable for specific challenges, or just lack of availability.

FEater and Shaw had a combined usage rate of around 47% on CN and 40% on EN, both heavily in favor of FEater.  Push utility can be extremely effective for not only instant-kills but also repositioning/rerouting enemies, especially notable in CC#0.  FEater appears to be more valued due to her additional slow on reposition, dodge, and stronger push force at max skill level.

Projekt Red and Gravel had a combined 20% usage on CN heavily favoring Red and 82% on EN with roughly equal usage.  Fast Redeploy units are primarily used to buy crucial seconds with their stall ability and redeployability.  While they can be a clutch in some strategies, they can provide ample breathing room for the cost of one slot.  Red's higher usage in CN is likely attributed to her AoE stun on deployment, providing the potential to stall multiple enemies in comparison to Gravel's one block.

Siege: The Lion King had a 74% usage rate on CN and 24% usage rate on EN.  The lopsided usage is likely due to a strategy that involved using Siege's S3 as a low-DP guard for CC#0.  Otherwise, she has a bit more options for general DP generation with S2 focused on AoE damage.

Angelina: Once lauded for her part time job as a long range AoE caster under the support class, Angelina's 47% usage in EN (CC Beta) fell down to 2% on CN.  For CC#0 range tile bans were more common, as well as the unbanned tiles being unoptimal for her, making it extremely difficult to deploy our faithful messenger.

Bagpipe: Another van GUARD, Bagpipe interestingly only had a 4.29% usage on CN despite her reputation for being able to deal fantastic damage.  This is most likely due to her release with the event, making it more difficult to max her out immediately and figure her out.

Cuora: While Cuora's usage on EN was relatively close to Hoshiguma's, her usage fell drastically in CN/CC0 to sub 1%.  This is likely due to her lower skill uptime, inability to attack during skill usage, compared to the likes of Hoshiguma and Nian.

Manticore: Although she was hyped up as a strong CC unit, Manticore has relatively low usage, with 14% on EN and .96% on CN/0.  This could be because the heat pump stage can be done in CC0 with defenders and specialists, but Specialists require a lot more micro to carry out, as well as most people likely have Defenders leveled but not Specialists.