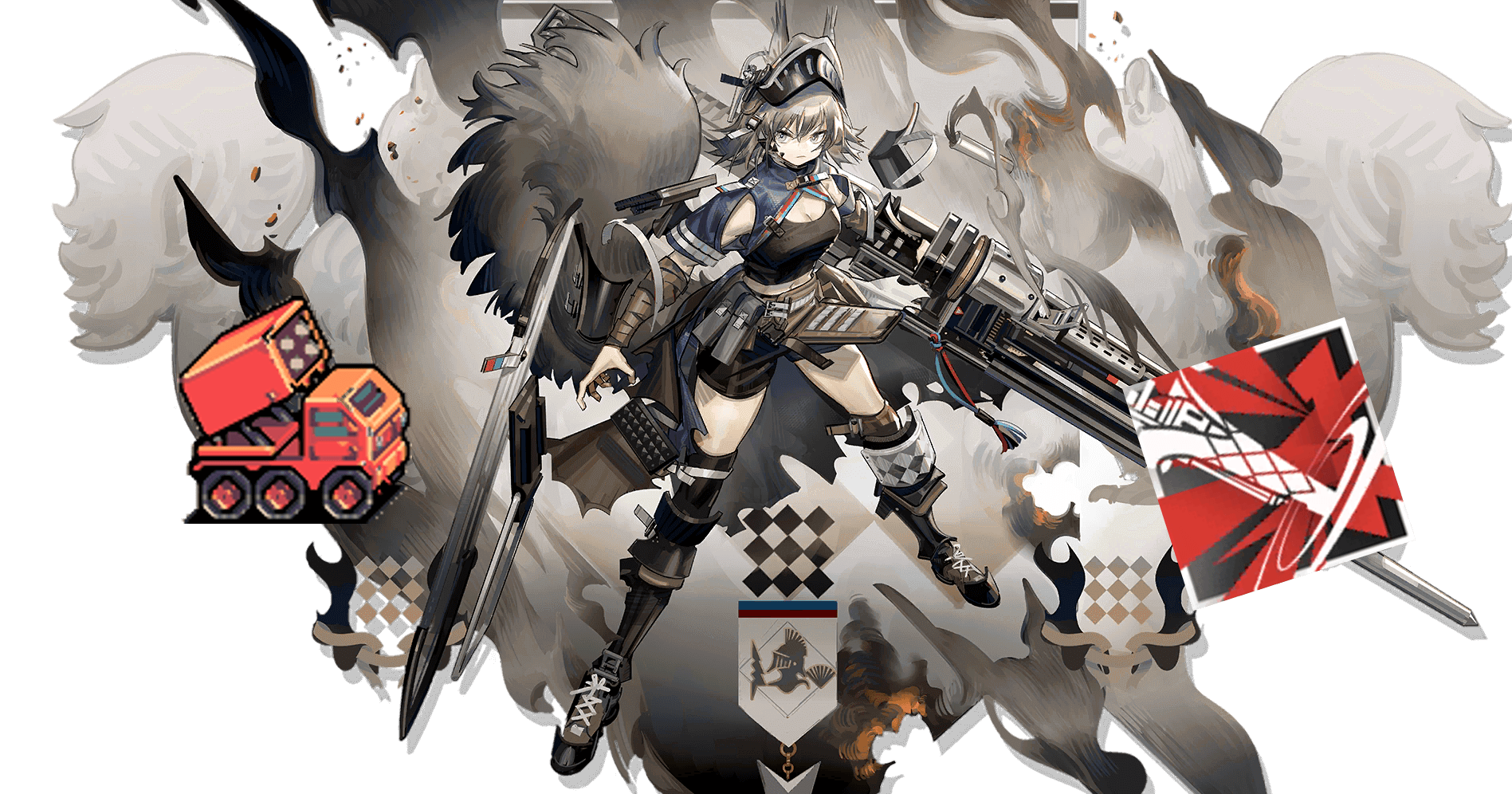 Hello. It's like a week late but the recent Pinus Sylvestris event brought us 2 special units that focus on extreme long range fighting, Ashlock and Fartooth (who I'll also do a guide on). Ashlock is a new Defender archetype called Fortress Defender. What can she do that set her apart from the giants like Saria or Mudrock? Let's find out.

Ashlock – the new 5* unit from the Pinus Sylvestris event – is a new defender archetype specialised in ranged combat rather than melee – officially named Fortress Defender. Her stats and skill set all point toward that notion. Having eerily similar foundations to an Artilleryman Sniper (formerly called AoE or Splash Snipers), she’s best viewed as a melee and tankier version of them. With a really long range, fast rotation, and strong burst AoE damage, Ashlock is here to provide amazing backline artillery support.

Ashlock’s base ATK is really high, losing out only to Duelist Defender (Eunectes and future unit Aurora). For a better perspective, it rivals that of an Artilleryman Sniper (Meteorite, Sesa,...).

I brought up the comparison to Artilleryman since Ashlock, and subsequently other Fortress Defenders, have an attack interval of 2.8 seconds, the same as them. That is also very slow for a defender as the 2nd longest interval is only 1.6 seconds for Juggernauts, Duelists, and Arts Protectors.

On the other hand, because Ashlock was busy getting great ATK stats (for a defender), she forgot to get some defensive stats to match regular defenders. Her HP is actually okay, losing to other same rarity Protectors but beating out all other Guardian Defenders except Blemishine.

Her DEF however, is atrocious (for a defender), losing to every other defender except Vulcan, Shalem, and the 4* or below rarity, and some 4* still beat her too.

As for RES, she has none.

She blocks 2 at base, and 3 at E1 onward, similar to a Guardian.

Defenders’ DP cost in general is kinda high, especially because they also get an extra 2 DP every time they are promoted, instead of just once at E1 and done. Starting at 23 base, the cost goes up to 25 at E1, and ends with 27 at E2. In fact, it’s nearly similar to, you guessed it, a same-rarity Artilleryman Sniper.

As preluded, Ashlock has a pretty long range. But it’s not a continuous range, it’s more similar to a Besieger’s (Rosa and Toddifons).

Do note 2 things, one is that the gap between her placement and the range of attack is 2 tiles (the greyed out tiles), unlike the Besiegers who only get a 1-tile gap.

Two is that she can still perform melee attacks when blocking, unlike the Besiegers who can’t, even if they can be placed on mixed area maps like CE-5.

(if you ever played the Advance Wars series, you can call her a Rocket Launcher, which is the thing I put in the intro art)

This is why they have that range. Ashlock will prioritise firing ranged attacks if she’s not blocking someone.

This “priority” means that if she is dropped on top of an enemy that is blocked by someone else, she will use the ranged attacks first if possible, then use the melee attacks if not.

The AoE radius is 1, the same as Splash Casters and Artilleryman Snipers (the similarities never end!).

Basically Ashlock gets free 8% ATK. She does have quite a high base ATK so it’s not an insignificant amount. At about E2 40, that’s a free 67.2 ATK. At max level it nearly pushes her into 4 digits ATK territory (and it does at pot4!).

As for the enhanced effect, there are actually a fairly decent amount of maps that can fulfill the conditions, but it usually means a bit of an awkward position for her. I recommend not minding the enhanced version too much and think of it as a bonus if she can make it.

Blue box, Red box, water tiles (e.g. the new Dossoles Annihilation), and holes are considered ground tiles for the talent to work. Any “object” placed on a ground tile like Sand mounds (note that Sand mound still can be on a ranged tile), Roadblocks, or Stun Generator (e.g., that thing in 1-7), etc. still counts for her talent too, and most notably, this WD-EX-6 spot below.

Available at E1 – Pinus Sylvestris ⍺: When assigned to a Factory, efficiency +15%

At E2 it upgrades to Pinus Sylvestris β: Efficiency +25%.

Despite the name, it’s just like the generic factory skill that gives 25%. So treat it as such.

A future unit (okay I was late enough that that unit is already out and is called Flametail) can enhance this Sylvestris base skill though, so if you aim to raise that operator, this base skill is not so generic then. But I digress, that’s not the point. (Plus you shouldn’t E2 someone just for base skill.)

Uhh maybe not but

It’s a generic skill, what can I say. Well, since Ashlock is technically ranged, the classic tip of “use the skill while a projectile is midair” does apply here.

Funny enough this is the only skill Ashlock has that can improve her melee combat. Still, I don’t recommend this because her next one is just that much better.

To be more precise, this skill does have a better uptime than the next one, and can enhance her melee attack, but everything ends there. You can say, “yeah she might be needed to catch enemies that leaked past your real front line” but why catch leak when her 2nd skill can just kill from range. And if you’re bringing her as the sole defender, where her range is just used to take pot shots for the first few enemies in a wave, well that’s a very specific strategy. (plus I actually still recommend S2 in this case and just trust the rest of your team instead)

Basically, if you can’t handle the 1 drawback of her next skill, use this one.

The M1 SP reduction breakpoint is good but irrelevant compared to the breakpoint M3, the reduction in interval is what matters.

The “block-0” aspect and the “disable melee attacks” are why I said her first skill is the only one that can enhance her melee combat, and that is the skill to use if you want to block enemies with her for extended combat.

The effect might look like it expands the AoE because the explosion looks bigger, but it’s purely visual.

Since this is the first design for the Fortress Defenders, I’m guessing that HG wants to make them a pure backline unit that also can occasionally catch leaks. I’m sure almost everyone put this unit behind the actual frontline to rain bombardments on the enemies from behind, like an artillery unit. Hence, the term Fortress (at least that’s what I thought their decision is based from). They sit “inside a base” and shoot outside the “wall.”

For a basic use, just put her behind your front line and act as a melee Artilleryman Sniper. Other than the blocking aspect, this skill is just better than her S1 in damage, and a faster skill rotation means that you can (almost) always have this skill on at every wave. Which means you can (almost) just spam it off-cooldown.

But that’s not all, because of their long range, it can be used to reach otherwise unreachable enemies, most known in the 7-16 clear without anyone on the right side. It’s something you have to go out of the way to make use of it though.

I also like the idea of actually having Ashlock in front, not to primarily tank, but to use the block-0 aspect of this skill to act like a “gate,” letting through some enemies for other allies to finish them off, while taking shots at faraway enemies. She can still block enemies during the downtime of the skill, after all. Due to her nature as a defender – she loses to her kin in defensive stats, but she beats maxed Blaze with S2M3 – she can perform as a regular tank during downtime (example, I'll link it again at the bottom though).

S2 then allows her to ignore the current melee enemies in favor of the faraway enemies (example), and your other units can just (have to) take care of those melee ones. This way, she can soften the enemies before they reach the rest of the team, lessening their burden. And this skill has a decent amount of damage, especially at M3.

(Using “block-0 on skill as a gate” is a technique I employ extensively when I use Flagbearers, even after Bagpipe. It’s a fairly underrated technique in my humble opinion.)

The skill only needs 8 SP to activate on first deployment, making it a pretty decent helidrop as well.

Do note this small quirk, since Ashlock S2 attacks so fast, she might overshoot an attack at a dead enemy, potentially wasting it.

Not available yet. Maybe check back after it was released

Ashlock carved out a really weird niche. As said, this event brought along 2 units that are known for their absurd range, which allow you to snipe enemies from massive distances. But it’s not something that’s really relevant most of the time, like, do you really need to kill them that far ahead or you can just use the regular ranged units? You can do whatever you want in this game though (unless it’s really high risk CC), so if outrange-ing the enemies and dealing decent AoE bursts is your thing, Ashlock is your girl.

As mentioned a couple times, you should treat Ashlock like an Artilleryman Sniper, except melee and tankier (It’s nice when Aak just barely scratches her HP with his buffs, right?). She provides support fire mainly, but she can also be used as a main DPS if you allow it.

A future unit, Horn, is a 6* Fortress Defender, so expect her to outdo Ashlock’s damage. She also doesn’t have the drawback of being unable to block the enemies, but her skills (can) reduce HP, so the idea still remains that she’s better off being a backline artillery. This time, unlike Ashlock, it’s not a “requirement.” In fact, her kit plays off the “doing ranged attacks and meleeing occasional enemies” really well. If you ever think that you want to use Ashlock S1, I recommend checking out Horn. (Granted, Horn will come very close to a limited banner, so…)

You can check out a showcase I made here, made from half-stolen and half original content (the 2 examples above is included in it).

So what do you think about Ashlock? A defender that hides behind other allies does sound wrong, but if you think of it as a melee-tile, tankier Artilleryman Sniper that can block, maybe there are some merits to it? I felt really weird and awkward using this term throughout this guide btw, thanks HG. Also, why did they call the AoE sniper “Artilleryman” when this defender class does exactly what the term Artilleryman describes? Regardless, since I really love using those Snipers, a ground version of them is definitely within my interest. A bit sad that Horn took a lot of the spotlight from her though.

Anyway, thank you for reading, and I’ll see you next time.