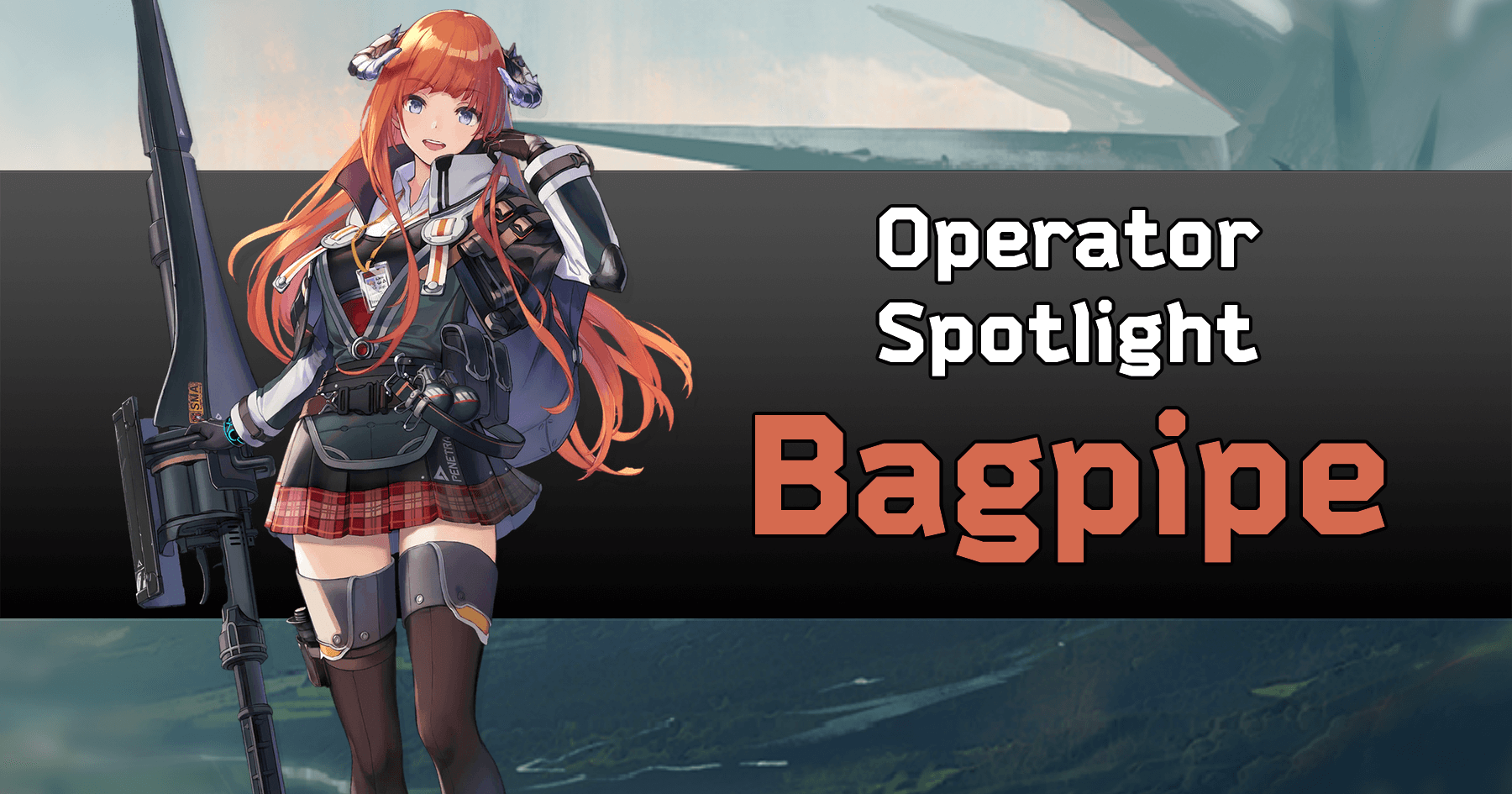 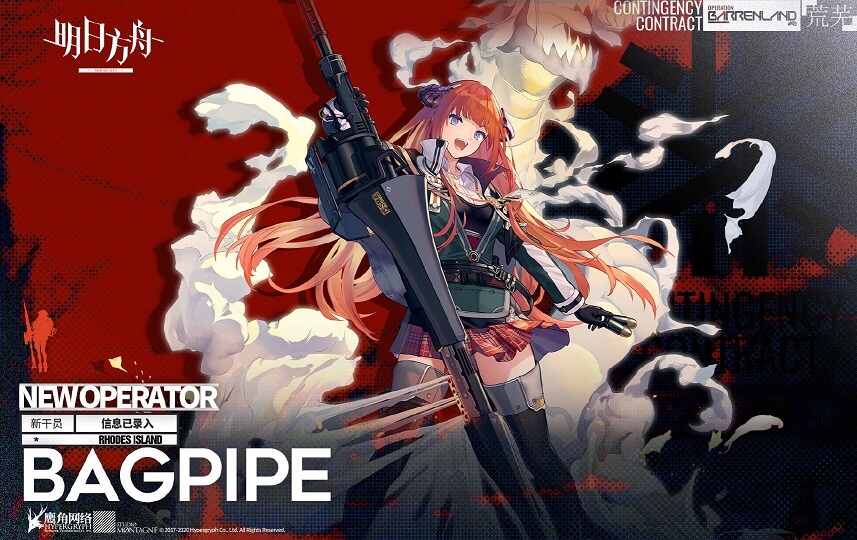 Bagpipe is an upcoming Vanguard in Arknights Global, and the first 6★ DP-on-Kill Vanguard Operator. There’s no shortage of Doctors swooning over her baby blues and comfortable tartan, but there are many other Doctors wondering, “Is Bagpipe worth it?” Let’s take a closer look at what Bagpipe can do with that giant mechanized spear of hers so Doctors can answer that question for themselves.

What is Bagpipe's Role? What Makes Bagpipe Special?

As previously stated, Bagpipe is a 6★ Vanguard who belongs to the DP-on-Kill archetype. In other words, when she kills enemies, she earns DP. For more details on her stats, Skills, Traits, Talents, and more, refer to her Operator page.

Because Bagpipe’s goal is to kill enemies in order to generate DP for her team, Bagpipe’s kit is all about killing enemies with big burst damage. Between her huge damage spikes and her multiple attacks, Bagpipe is willing—and able!—to steal all the kills on the field and maximize her DP generation.

We also have to give a special shoutout to Bagpipe’s E2 Talent, Martial Tradition. This Talent gives all other allied Vanguards extra initial SP every time they are deployed. This may not sound very important, but Martial Tradition actually accelerates the early DP gain of Skill-DP-Recovery and Utility Vanguards dramatically. It’s no exaggeration to say that Bagpipe creates an entirely new set of “hyper-accelerated early-game” strategies due entirely to this Talent. (When people say they're going to pull multiple Bagpipes to get her to Potential 4, Martial Tradition is the reason why. Even without Potential, though, this Talent is bonkers.)

When Should I Use Bagpipe?

How Does Bagpipe Compare to Other Vanguards?

Instead, let’s talk about the differences between Bagpipe and the other DP-on-Kill Vanguards in Arknights: Vigna, Grani, and Reed.

Bagpipe is very much “Vigna on steroids.” She has much better stats than Vigna, a stronger Talent with a higher activation chance, and multi-target capability that Vigna lacks. The initial SP that Bagpipe gives to other Vanguards and the defensive buff on her S3 are just icing on the cake.

That being said, Vigna actually has a bigger ATK buff (and better uptime on that buff) with her S2 than Bagpipe does with her S3. Vigna also has a lower DP cost, is cheaper to raise, and is easier to max in Potential.

Bagpipe is still the stronger Operator, but the gap between the two is much closer than you’d expect between a 6★ and a 4★. And make no mistake, that’s not because Bagpipe is bad. It’s because Vigna is just that damn good.

Poor Grani doesn’t have a lot to recommend her over Bagpipe. Offensively, Bagpipe blows Grani out of the water, and Grani is even disadvantaged in other subtle ways, like having a higher DP cost and a slower Redeploy Time. Grani’s claim to fame is gaining Block +1 and multi-target attacks with her S2, but between her Talent and her S3, Bagpipe has all that functionality and more.

On the plus side, Grani has notably higher base DEF than her redheaded competitor. However, Bagpipe’s S3 has a much bigger DEF buff than Grani’s S2, and while both Skills are active, Bagpipe’s DEF is higher. Grani’s S2 does last longer than Bagpipe’s S3, though, and Grani also has an extra layer of protection with her Talent, which gives her (and all other Vanguards) a Physical Dodge buff. Grani’s Talent is probably her biggest distinction in this case, but Physical Dodge is not reliable, so its value in a direct comparison is hard to measure.

On rare occasions, Grani might be able to survive situations that Bagpipe could not—either with her higher base DEF, her Talent, or the longer duration of her S2. However, Doctors who like using Grani will find their strategies are even more efficient when using Bagpipe instead.

At first, this comparison looks like a slaughter. Reed doesn’t compare to Bagpipe in terms of stats, and Bagpipe’s DPS potential leaves Reed in the dust. You might think Reed catches up due to the Arts damage on her S2, but the amount is so minor that Bagpipe will still outdamage Reed 99% of the time.

Despite this, Reed has some tricks up her sleeve that make her stand out: higher RES (from her Talent) and better DP gain (from her S2). Her RES helps her better survive enemy Casters, and having twice the DP gain of Bagpipe during her S2 (which lasts longer than Bagpipe’s S3) can also make her a better choice for the start of a map when DP gain is crucial.

Bagpipe is the best DP-on-Kill Vanguard currently available in Arknights, and will be worth a spot on almost any team. Not every player likes using DP-on-Kill Vanguards, but if you have any interest in the archetype at all, Bagpipe is an excellent addition to your army.

If you’re planning to pull for Bagpipe, we at GamePress wish you the best—and the very most Scottish—of luck!