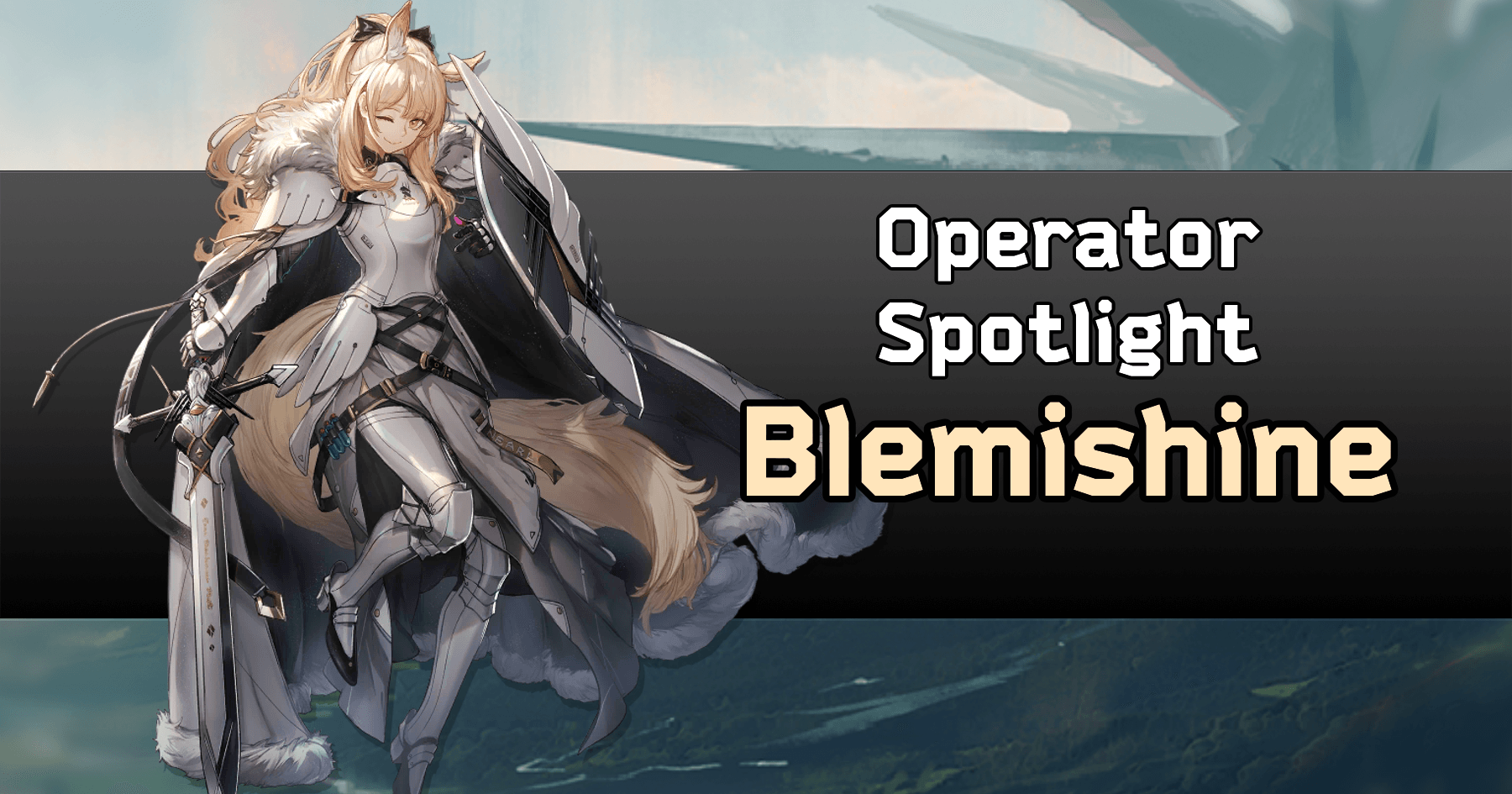 Blemishine is a new 6★ Healing Defender Operator who has just been released on the global Arknights server. As the glorious sister of esteemed former knight Margaret Nearl, Blemishine is renowned as one of the most popular knights in Kazimierz. But how does she fare when fighting in the ranks of Rhodes Island? Is Blemishine worth it? 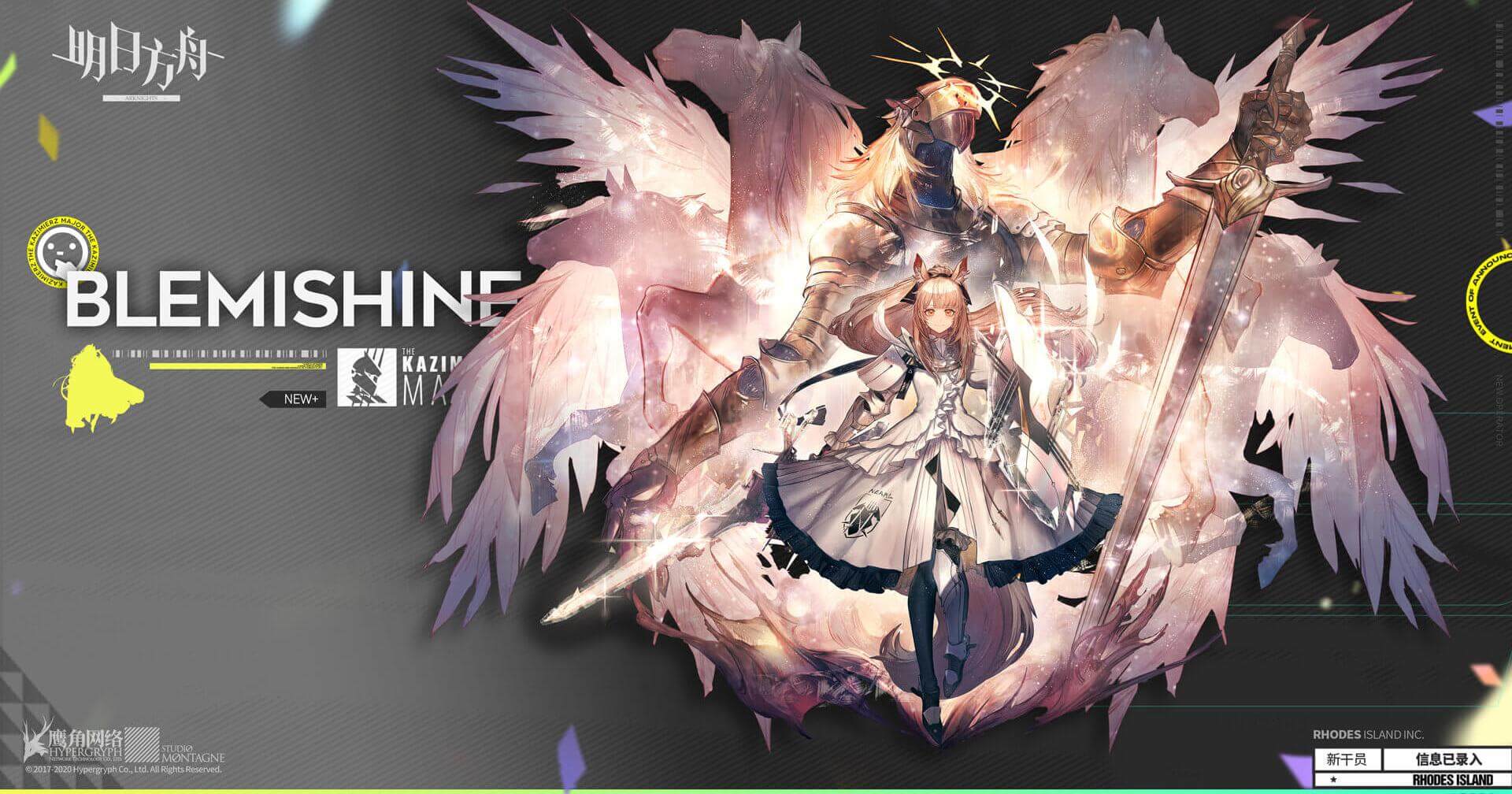 As stated above, Blemishine is the newest 6★ Healing Defender. This means she has Block-2 at E0 and Block-3 at E1 or higher, and it also means she can heal allies with her Skills. You can see specifics about her Talents, stats, Skills, and more over on her Operator page.

Healing Defenders are known for their healing powers and their defensive nature—it’s in the name, after all. But what you may not be expecting from Blemishine is “high damage potential” and “hard crowd-control via Sleep.” All of her Skills increase her ATK, her S3 deals Arts damage, and her S2 puts all enemies on her tile to Sleep. Blemishine is the epitome of a jack-of-all-trades unit, able to fight, block, heal, and debuff enemies all at the same time.

Blemishine’s most unique ability is her Mercy Talent, which allows her to attack Sleeping enemies. At present, Blemishine is the only Operator who can do this (Sleeping enemies are normally invincible while the effect lasts). Is this a useful ability? It’s a bit limited right now, since the only other Globally-released Operator who can inflict Sleep is Sora, but the CN servers have other Sleep-capable Operators, and there may be more to come in the future as well.

When Should I Use Blemishine?

The position of 6★ Healing Defender has long been held by Saria, Queen of Contingency Contracts and mistress of team support. Now Blemishine enters the ring to compete against her. How do these two Operators compare?

Is Blemishine Better than Saria?

Short answer: No. Saria is better overall than Blemishine.

Saria is a much more reliable healer, SP battery, and crowd controller than Blemishine, and her healing can even make her a better damage soak in some situations despite Blemishine’s DEF buff. Blemishine’s kit is spread slightly too thin to compete with Saria’s strengths, and her unique ability to attack Sleeping units doesn’t make much of a difference unless you were planning on using Sleep already.

That being said, there is one aspect where Blemishine manages to surpass Saria: her astounding synergy with a few small subsets of Operators. Blemishine dramatically increases the viability of any [Getting Hit] Skill due to Sword and Shield, and her S2 makes her far and away the best healer for any unit that cannot be directly healed. In particular, an upcoming Operator (who is already quite strong enough on their own) jumps to ludicrous levels of broken with Blemishine’s help, and there may be other such Operators in the future.

Blemishine is very versatile, but she is generally outclassed by Saria, who fills many of the same roles but does so more reliably. There are some situations where Blemishine’s strange spread of strengths snaps into place and she suddenly excels, but at other times she can struggle to stand out from the crowd.

Even at her worst, though, being a “less reliable Saria” still makes Blemishine better than many other units. Whether you’re interested in her synergy with other Operators or just head over heels for her divine design, then we at GamePress chivalrously wish you luck in pulling her!

A Walk In The Dust - Event Operations and Farming Guide

A Walk In The Dust - Event Store

A Walk In The Dust - Event Missions

Custom avatars
can’t find any info about when custom avatars were added to the game. very curious…
World of Oripathy, Strife, and Chess Pieces (Fanfiction)
Kal’tsit: “…and that concludes my report for this month.” Doctor: […] Kal’tsit: “If…
Bored Doctah Chronicles #24: The Very Much Requested Red-head Thread
image600×843 151 KB image910×1143 262 KB image640×895 161 KB image709×1000 112 KB…
Maria Nearl Event - EX Stages Challenge Mode playthrough ft. Zumama
Hey there my dear fellow doctors Your beloved Mastro is back at it again with the…
Welfare tokens
Is it worth buying welfare operator tokens from event shops? I heard you can get…
Read More