Arknights: New Operator Spotlight - Grani: How Do I Use Her? Is She Better Than Vigna? 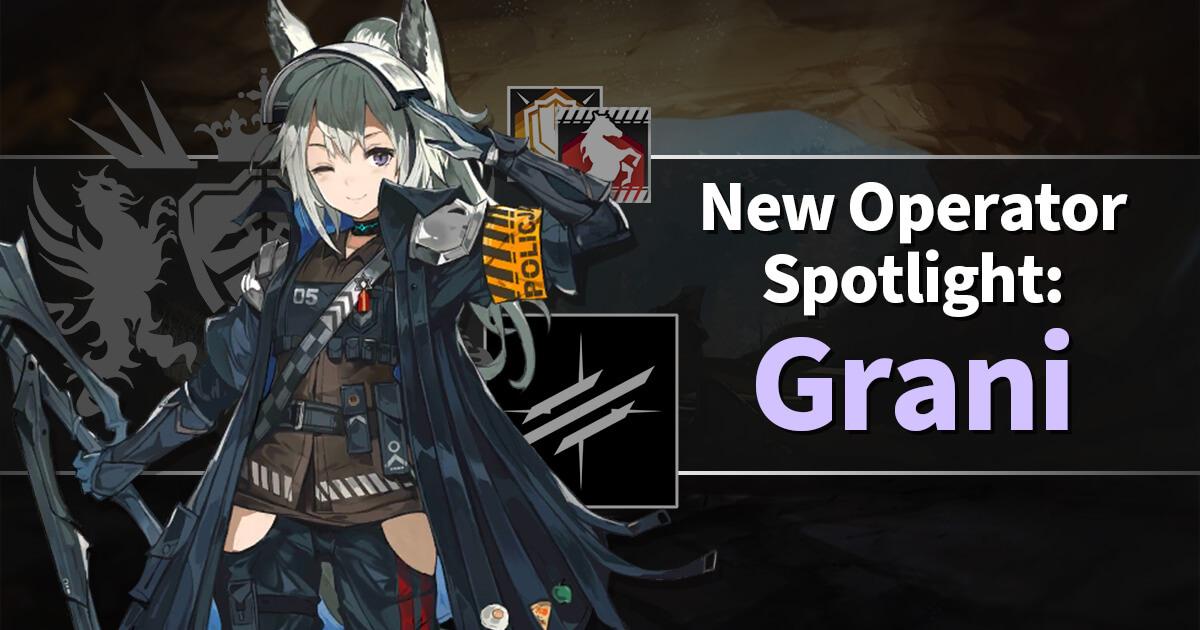 The Little Girl Who Could!

Grani, the cute little try-hard and co-star of the new event Grani and the Knights’ Treasure (because Big Bob was obviously the true star of the show), has by now joined the squad of many Doctors.  So some of you are probably wondering: “Is She Gud?!?!”  By the end of this article, I hope you’ll be able to answer that question yourself.

What Do I use her for? What is her role?

Grani is a 5 ★ DP-On-Kill-Vanguard.  All of the details on her Stats, Traits, Talent, Skills, etc, can be found on her Operator Page, so I will not repeat them here.   As a Vanguard, she is best used early in the battle to quickly generate DP to deploy your stronger, more permanent front-line Operators.  As a DP-On-Kill Vanguard, she is best used in a situation where she can kill as many enemies as possible, and then be retreated, since all of her DP is refunded.

To learn about some of Grani’s strengths and weaknesses, I recommend starting by reading her Operator Overview.  I will focus on information not explicitly already stated there, so as to not repeat myself.  However, I do think it is worth mentioning again her unique strength:

Grani’s stand-out ability is her Skill 2, Press the Attack!, which grants a strong ATK and DEF buff, increases the number of enemies she can block, and allows her to attack multiple enemies equal to her block number.  The Skill is ready fairly soon (from 20-30 seconds) after deployment.

Thus, Grani truly shines when she can be dropped in front of a multiple weak enemies and activate her Skill to multi-attack and mow them down.  Then she can be retreated when her Skill duration expires, to be replaced by a more permanent front-line member.

It should be noted, however, that her Skill 2 also reduces her attack Range.  Therefore, while it is active, she won't attack enemies that are just passing by 1 square in front of her.  This limits her potential placement, especially as a support or chip damage option.  Also, though the high Initial SP means her first use of the Skill happens fairly quickly, it has a long cooldown, making subsequent uses a much longer wait.

When do I use her over DP-From-Skill Vanguards?

DP-From-Skill Vanguards are the more common type of Vanguards, and they return DP over time using their Skills.  They are best used when you need a lot of DP over the course of a fight. Even if other Operators are deployed in front of them, they continue to do their job and generate DP in the back-lines.  With DP-On-Kill Vanguards, however, they have to do the killing to be useful. They only gain DP if they get the killing blow, so the more DPS support they get, the worse they do.

Thus, DP-On-Kill Vanguards are better used as a supplement to DP-From-Skill vanguards, or as temporary drops in situations where an Operator just needs to be deployed quickly to kill a single enemy and retreated after, as the full DP refund that DP-On-Kill Vanguards offer can be valuable especially early in a battle.

For example, on maps with early rushes of weak enemies like originium slugs that can be killed quickly, DP-On-Kill Vanguards like Grani can generate a bunch of DP easily and be retreated for a full refund, giving you a large pool of DP available to deploy stronger specialized Operators more quickly. For maps like AP-5 or Chapter 4 story maps where a temporary deployment to draw fire is necessary, DP-On-Kill Vanguards can also work for players that want to save their DP.

Another advantage of the DP-On-Kill variety of Vanguard, is they tend to be more useful as a possible re-deploy option later on in maps.  This is because they have higher base stats, and Skills that are specialized to kill enemies rather than just generate DP.

Should I use Grani or Vigna?

Well, the main reason to use Grani is when you get sick of taking Vigna’s Tsundere back-handed insults, of course, and want a more cheerful supportive personality.

For gameplay purposes, however, first let’s take a look at their maximum stat-lines (including  maximum trust gains).

Pretty obvious: Vigna is a stronger attacker, Grani is a stronger defender.  Before we start making conclusions, let’s compare a summary of their Skills and Talent:

Their abilities support what we saw in the stats. Grani leans towards Defense, while Vigna leans towards Attack.  So which one is better? Like most things in Arknights, the answer is: “It depends on the situation.”

Vigna’s higher Attack and pure offensive focus jives incredibly well with her job, since she needs to kill enemies to gain DP.  She can be quite a destructive force, and is great when a steady stream of weak/medium strength enemies are coming early in a map.  It also makes her fantastic for use as a “chip damage” Operator later in maps, dropping her somewhere she can put some hurt on a boss or stronger elite enemies.

Unfortunately for Grani, the DP-On-Kill role is not the greatest for Defensive purposes.  The block 1 base stat and lack of consistent DP regen make standard Vanguards much better if a defensive unit is required (for example, Courier).  Thus, Grani is better to use when her Skill 2 can be taken advantage of: a rush of multiple weak enemies where she can make use of her AoE.