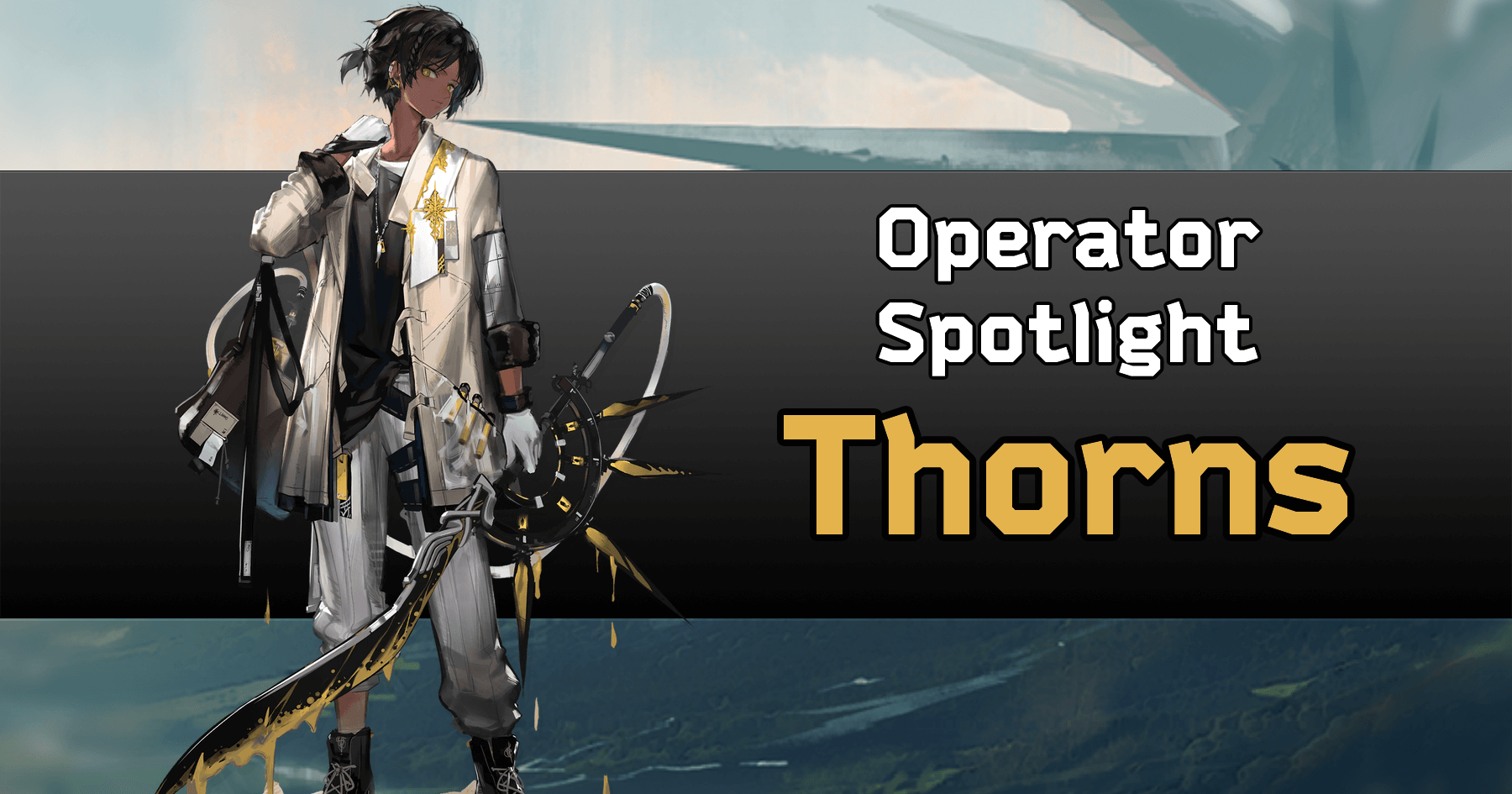 Is Thorns Good? Is Thorns Worth It? 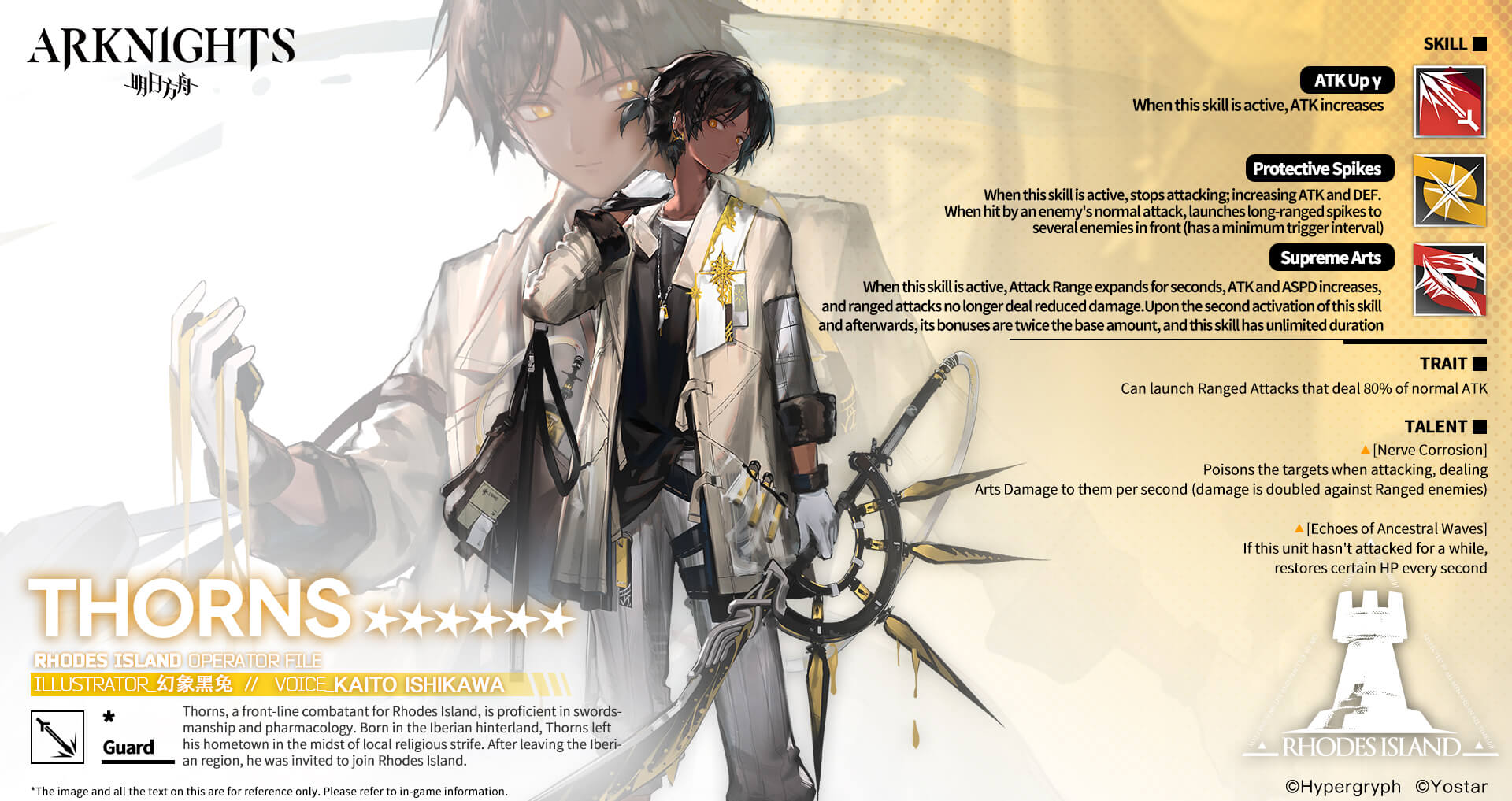 Thorns is a new 6★ Ranged Guard Operator who has just been released on the global Arknights server. He’s been the focus of many memes, his personality can be summed up as “hot mess,” and whispers of his power level and its proximity to 9000 have been floating around for months. What’s the rundown on this eccentric Operator? Is Thorns worth the hype?

What is Thorns’ Role? What Makes Thorns Special?

As previously stated, Thorns is a 6★ Guard—specifically, the most recent addition to the Ranged Guard archetype. Most Ranged Guards have some combination of ranged DPS, survivability, and crowd-control. Thorns specializes in the first two, adding “Arts damage over time” to his DPS, “HP regen” to his survivability, and “multi-target counterattacks” in the middle of both. For the fine details on his stats, Trait, Skills, and more, take a look at his Operator page.

Thorns’ coup de grace is his S3, Supreme Arts, which buffs his ATK, ASPD, and attack range while removing the damage penalty that Ranged Guards suffer on their ranged attacks. The mindblowing thing about this Skill is its duration: it lasts for 30 seconds the first time it is used in a battle, then it becomes permanent the second time.

Let’s say that one more time: the buffs become permanent the second time they are used in a battle. They also double in strength. As if gaining Sniper attack range and attack speed on a ground unit wasn’t good enough on its own.

To say this Skill is strong is an understatement. Supreme Arts gives Thorns unparalleled potential for consistent DPS. On long stages, particularly endurance runs like Annihilation stages, this Skill’s value is incalculable.

When Should I Use Thorns?

When Should I NOT Use Thorns?

This is the burning question that’s on everyone’s mind. Does Thorns finally unseat the legendary SilverAsh as the best Ranged Guard and as arguably the most broken unit in Arknights? Well… let’s just say it’s a close one and get right down to comparing them!

Here’s the thing: yes, Thorns and SilverAsh are both 6★ Ranged Guards, and yes, they’re both broken. However, in terms of actually using them, they couldn’t be more different.

SilverAsh has two purposes: he reveals stealthed enemies, and he schwing-schwings enormous burst damage to destroy a single wave of enemies. Remember how the one thing Thorns can’t do is burst damage?

Thorns has one purpose. He charges Supreme Arts, awakens into a pseudo-Sniper, and rains consistent DPS down on everything that crosses his path for the rest of the fight.

(Both of them are also shockingly durable if they’re using their S2s, but nobody really uses them for that unless they have to. Anyway, they’re on pretty equal footing there, so we’re going to ignore it for the purposes of this comparison.)

So which one is better? Sorry to give you the cop-out answer, but it depends on what other Operators you have and what the stage calls for. If you already have other strong burst-damage Operators like Schwarz and Ch’en, then Thorns is more valuable. If you’ve been focusing on sustained DPS from Operators like Ifrit and Blaze, then SilverAsh is instead. And if you have both, well, SilverAsh will be stronger on some stages and Thorns on other ones. What can we say? Ranged Guards are just a strong archetype overall, and these are two sterling examples of why.

Thorns is incredibly powerful and fills a very different niche from SilverAsh. His specialty is high, reliable, sustained damage, and there’s no question that he goes all-out in delivering on this strategy! He’s got Protective Spikes for backup, Nerve Corrosion to take care of pesky ranged enemies, and the ultimate Annihilation Mode tool in Supreme Arts… plus, he’s a very attractive husbando to boot.

If you’re planning to pull for Thorns, then we at GamePress wish you gallons of luck in the pursuit of this spiky, wacky, memetastic sea urchin!