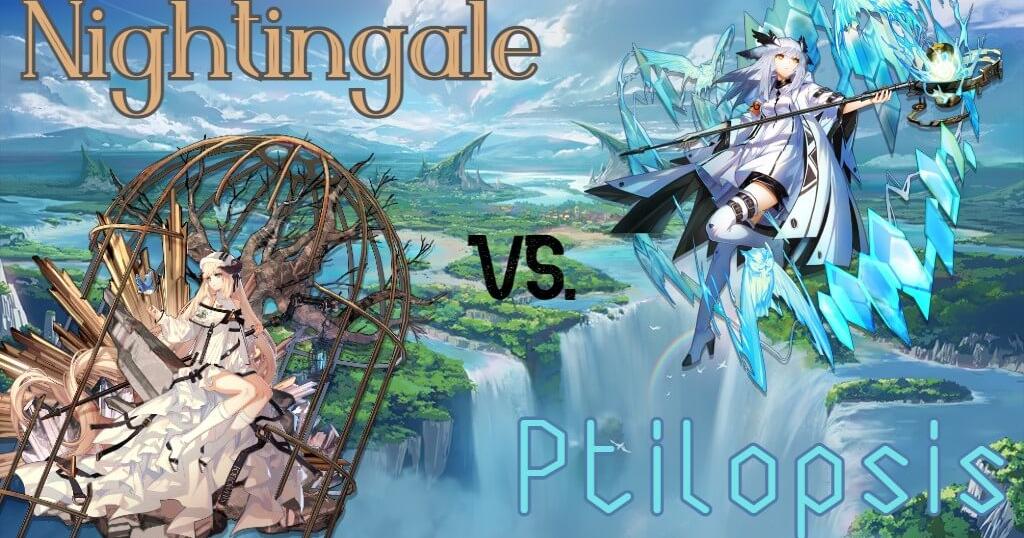 A very common point of contention within the Arknights community regards the combat effectiveness of different Medics depending on the squad. This is largely due to the powerful abilities of 5★ Medics like Ptilopsis or Warfarin, so much so that they are often recommended to players instead of their 6★ counterparts. But is this the right choice?

In this article, we will specifically be looking at the Ring Healer/AoE Medics most often used by the community, Ptilopsis and Nightingale, and whether one of them is the “better” option to raise.

Birds of a feather

If you have been part of the Arknights community for a while, you might’ve heard experienced players claim that Medics aren’t graded by their healing. How can that be?

The answer is pretty simple: most Medics have very similar healing capabilities within their archetypes, with their HPS (Healing per second) barely differing from one another with their regular attacks. That’s why most players choose Medics by what they do other than healing. It is in this regard that we will analyze Ptilopsis and Nightingale.

Ptilopsis’ main draw is her incredible talent Skill Aura, a 30% increase in automatic SP recovery rate affecting all units on the battlefield as long as she is deployed. This aspect is what often earns Ptilopsis an “offensive support” kind of role, as it lets her charge other units’ offensive skills much quicker.

One of the best known examples of this is her synergy with SilverAsh. His third skill, Truesilver Slash is as good as it is costly. At a whopping 90SP cost, it takes a minute and a half of downtime to be able to use it again. Because of this, under regular circumstances, it is faster to simply use him as a helidrop unit: retreating him as soon as the skill is done and redeploying him to utilize his amazing 75 initial SP (70 seconds of redeployment time, which can be reduced via potentials, plus 15 seconds of SP charging is faster than the full skill charge time). Ptilopsis solves this “issue” by making this skill charge even faster than with any of the other options, taking just 70 seconds to ready up again.

This talent is useful practically everywhere, but it shines in SP risks in Contingency Contract events like SP Cost Up I/II or SP Regen Down I/II by mitigating or outright negating their effects, which can be very important as these risks are often some of the most dangerous. It must be noted, however, that these Contracts have only shown up in two out of eight Contingency Contract seasons so far, Operation Pyrite and Operation Blade, making their frequency really low in comparison to other Contracts.

Under the caged Bluebird’s wings

Due to Ptilopsis’ lower rarity and more offense-oriented support style, Nightingale often gets ignored in favor of a more passive playstyle, but her kit rewards more thoughtful play in the form of complete stage denial. In this case, it’s both her two talents and her third skill that consolidate her value as a unit.

As it should be obvious from a glance at her kit, Nightingale’s role is that of an Arts Mitigator. Every single one of her useful abilities focus specifically on helping operators survive dangerous arts damage, or outright redirect it away from them. Since Arts is the most dangerous type of damage (excluding the few and far between True Damage sources that exist), Nightingale excels in harder content such as High Risk Contingency Contract or Chapter 8.

Her first talent, White Fiend’s Protection grants all allies within range (including range extensions) 15 Arts Resistance, mitigating all arts damage received by 15%. This synergizes pretty well with her second talent, Fleeting Phantom, which grants her two Phantoms (Mirages) on deploy that cannot attack, block or be healed, have 75 Res and 30% Physical Dodge, lose 3% of their max HP every second and, most importantly, have a high taunt level. If possible, enemies will always prioritize attacking them. As you probably know already, aggro manipulation is one of the strongest effects in the game, and being able to redirect any ranged attack to wherever you want is even better. Furthermore, the cages are also surprisingly tanky. Depending on Nightingale’s level, they have from 3000 to 6000 HP, and can benefit from her first talent and skills, shooting up to 90 Resistance while inside her range, and way over 100 when her third skill is activated. This, simply put, makes these Phantoms the best Arts tanks in the game, and because of their insane HP pool and nifty physical dodge, they are decent at redirecting every other kind of ranged attack as well. This allows them to last long enough for other characters to deal with the threats without risking being downed by powerful ranged attacks.

As a tech option, it’s also worth noting that these Phantoms are NOT summons, and they will not disappear if Nightingale is retreated or knocked out. Also, she can hold up to 3 at a time, allowing for certain strategies to retreat her immediately (or using just one cage) to end up with 3 once she’s deployed again. 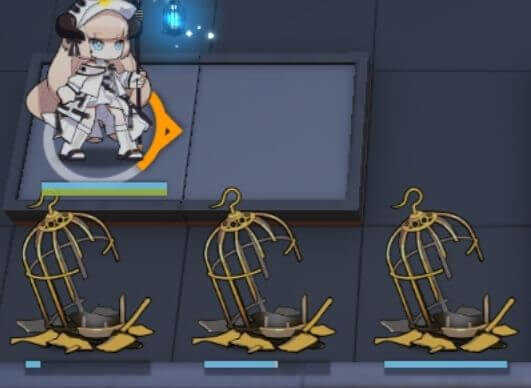 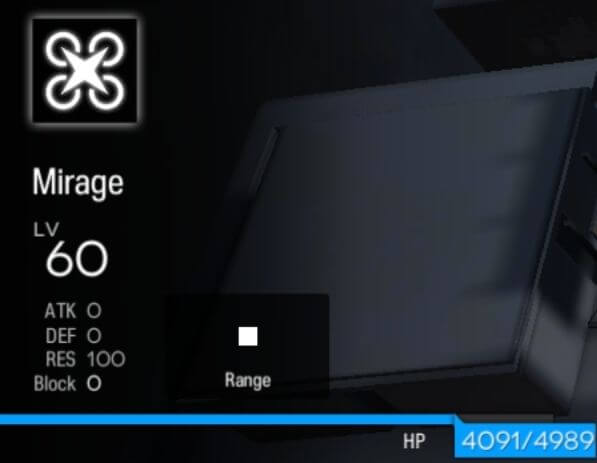 Stats of a level 60 Phantom under Nightingale's S3. Notice the very large HP pool and 100 Res.

Finally, the last part of her kit is her third skill, Sanctuary, which expands her range (to that of Angelina’s third skill, for reference), increases her attack and buffs the Resistance of all allies within range even further, immediately granting them a 150% increase in their Arts Resistance and a 25% Arts dodge. This makes operators with zero resistance jump up to a whopping 38 when under her protection for a whole minute, which is pretty insane.

It must be noted, however, that this skill has one of the most expensive costs in the game at 120SP per cast. With 115 initial SP, though, it’s quite a bit faster to simply retreat Nightingale when her skill is done and deploy her again whenever needed, which coincidentally also grants her two more Phantoms.

This hyper-focused support role is what makes or breaks Nightingale, as her kit either solves entire maps and challenges, or goes completely unused if there’s a lack of ranged or art attacks to control and mitigate. 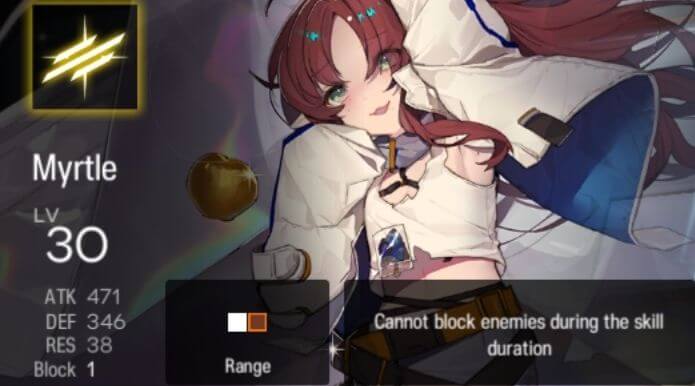 So, which one is better?

Assuming you have the option to choose, the real answer is that it depends heavily on both the kind of stage you’re facing and your current point in game progression. While Ptilopsis is easier to use and cheaper to raise, her offensive support can’t often hold a candle to Nightingale’s stage-solving abilities (especially if the skills aren’t used as soon as they are off cooldown, which heavily devalues Ptilopsis’ talent), making the viability difference between them vary wildly from one use to another. In general, late endgame players will find more use out of Nightingale because of content like High/Max Risk Contingency Contract or Chapter 8. Meanwhile, Ptilopsis’ ease of usage makes her a very strong option for the early and mid game, and often becomes the de facto Ring Healer/AoE Medic if the stage does not have threats for the Sarkaz healer to take care of.

In the end, more experienced players will be able to get the most use out of Nightingale, making her the preferred Medic for late endgame content, as her talents are most needed at that point. Ptilopsis takes her spot in easier or more lenient content, or the rare appearance of SP Contracts. 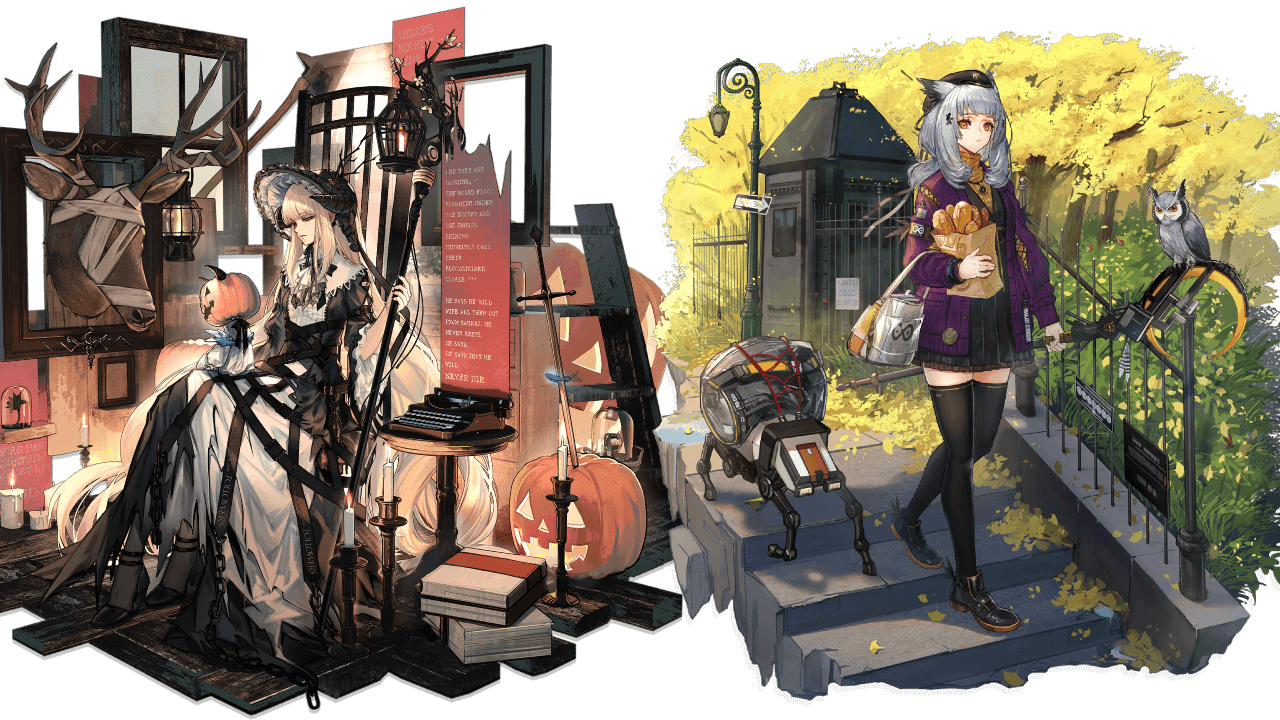