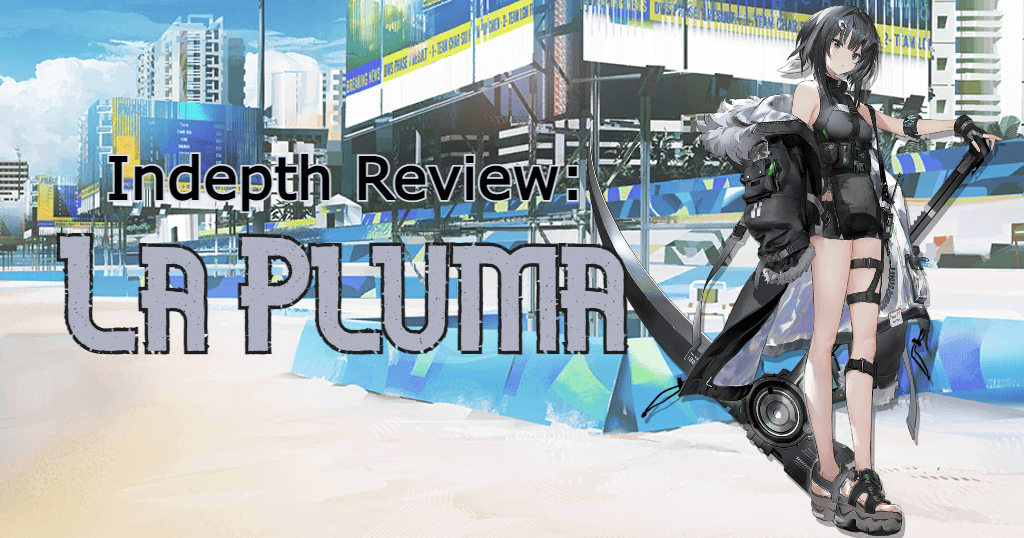 La Pluma is the future 5★ Reaper Guard featured in the Summer Stars banner, which will run alongside the Dossoles Holiday event. That’s a new archetype! For some reason Hypergryph decided to expand upon one of the most crowded classes in the game by adding two new archetypes in the same update. As the first (and so far only) representative of her archetype, La Pluma provides some very interesting insight on what future operators may look like, but before drawing any conclusions we first must understand how she works. Let’s find out!

Perhaps the best way to quickly convey what La Pluma plays like would be to imagine her as a quirky mix of Enmity Guards and AoE Guards. Her archetype-defining Trait, for example, is very reminiscent of that of Hellagur, Akafuyu and Utage: She cannot be directly healed by other Operators and recovers an amount of HP when hitting enemies (50 to be exact, less than Enmity Guards at Elite 2 but the same at Elite 1). As for her AoE Guard “heritage”, La Pluma can attack ALL enemies within range, regardless of her Block count. This, as you can probably already guess, makes her an excellent lane holder that doesn’t need any support in order to clean up effectively. Keep in mind, however, that she can only “drain” HP from as many enemies as her Block count as once. That is to say, at E0 she will only recover 50 HP when hitting a large group of enemies since her Block count is 1, and from E1 onwards she’ll heal 100 as her Block count increases to 2.

La Pluma’s unique range also lends itself incredibly well to her lane-cleaning archetype, hitting the three immediate tiles perpendicular to her position in a way reminiscent of Spreadshooter Snipers.

Thanks to all this, La Pluma (or, more adequately, her archetype) shapes up to be a perfect fit for holding lanes without wasting many operators at once, bringing interesting alternatives to Enmity Guards with a unique range that holds a lot of potential. 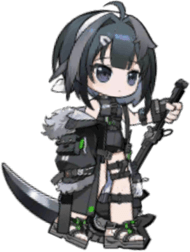 As the first Operator of her archetype, there’s not really much to directly compare La Pluma to, but following the AoE/Enmity Guard analogy her stats are, once again, very similar to both.

In regards to HP and Attack, La Pluma falls short of both other archetypes, with her HP being on the lower side even without the comparison to the tanky powerhouses that are Enmity Guards. Her Attack is similarly lower than both, but not by much. Where she really shines is in the Defense department, having noticeably more of this stat than both other archetypes, which compliments her the survivability granted by her archetype pretty well.

Apart from this and the aforementioned block count, she has a lower DP Cost and an ever-so-slightly slower Attack Interval (by 0.1 seconds), resulting in less overall DPS against single targets with her normal attacks.

At E2, whenever La Pluma kills an enemy she gains 3 extra Attack Speed, up to a maximum of 12 stacks, or +36 Attack Speed. This is massive.

While this may look like a worse version of Bibeak’s Soul Drinker, which stacks to the same amount of extra Attack Speed with a much lower number of stacks, La Pluma’s status as an AoE-hitting Guard with incredible sustainability makes this talent really, really easy to stack up in no time. If used as she’s intended, she will not have to deal with anyone else stealing her kills, letting her receive the full buff of her Talent really, really quickly.

When fully stacked, La Pluma’s Attack Interval falls from 1.3 seconds to an astonishingly quick 0.96, complimenting her archetypal trait perfectly and making her recovery even quicker. Additionally, unlike Enmity Guards where their Attack Speed bonuses are heavily dependent on their remaining HP, La Pluma’s boosts are permanent and non-conditional, making her much easier to use.

Remember when some people were hyping up Pallas’ Strikes of Victory as one of the best skills in the entire game because of its great sustained DPS? I wonder what they think of this skill. La Pluma’s first skill is as close to generic as you can get, and is almost completely identical to Pallas’. Every third attack this unit performs will have its damage increased by 165% and unleash an additional strike of damage.

This skill is as simple as it comes, but it’s also incredibly effective when in combination with La Pluma’s kit. Continuing the comparison with the aforementioned 6★ Support Guard, La Pluma’s skill has overall worse average DPS, though it’s free of any conditions that might suppress its damage. That is until you factor in her AoE capabilities, of course.

Due to her not having an upper limit to the amount of enemies she can take on at once, La Pluma’s first skill scales really well as soon as she has to take care of larger hordes of enemies, which also gives her an incredibly good sustain. At 2 enemies, her average DPS is enough to rival that of Pallas’ until about 500 defense, and at 3 she can even go toe-to-toe with Mountain’s Sweeping Stance for a while.

Overall, La Pluma’s first skill is definitely a great one that takes full advantage of her recovery, AoE and Attack Speed-oriented kit, resulting in something definitely worth checking out, and very much worth the masteries if you plan on using it. Still, this is not what most players consider La Pluma’s best skill. Let’s see why!

At M3, this skill reduces La Pluma’s already very short Attack Interval by half, raises her Attack to 170% and gives her strikes a culling effect, where if there is ANY enemy under 50% HP her Attack increases to 220%, for ALL enemies.

This is La Pluma’s more burst-oriented skill, and it turns her into a nigh-unkillable DPS monster that can simultaneously duel powerful enemies and not let a single mook go by. Her burst DPS can even surpass that of Hellagur’s as long as he doesn’t have the full effect of his talent, and that’s against a single enemy!

Her massively increased Attack Speed (which with all the stacks of her Talent makes her hit every 0.46 seconds) makes her an incredible recipient for Attack buffs such as Warfarin’s Unstable Plasma while simultaneously keeping her healthy through her archetypal Trait. Against a single enemy she will heal herself for an average of 107 HP per second, which thanks to her defensive stats should be more than enough to let her survive against all but the most dangerous enemies out there, at least for as long as they remain alive.

So, should I pull for La Pluma? Is this new archetype worth keeping an eye on? Will she become my new go-to self-reliant laneholder? The answer is MAYBE. While she’s nowhere near as powerful as some of the top tier 5★ Operators (such as Specter or Elysium) and doesn’t necessarily bring anything incredibly unique to the table, her kit is very well designed and makes her an undeniably good Operator. Since she is a rate-up in one of the most powerful banners we’ve seen so far, it might be worth checking her kit out and raising her if it’s something you might be interested in. She will not disappoint you! 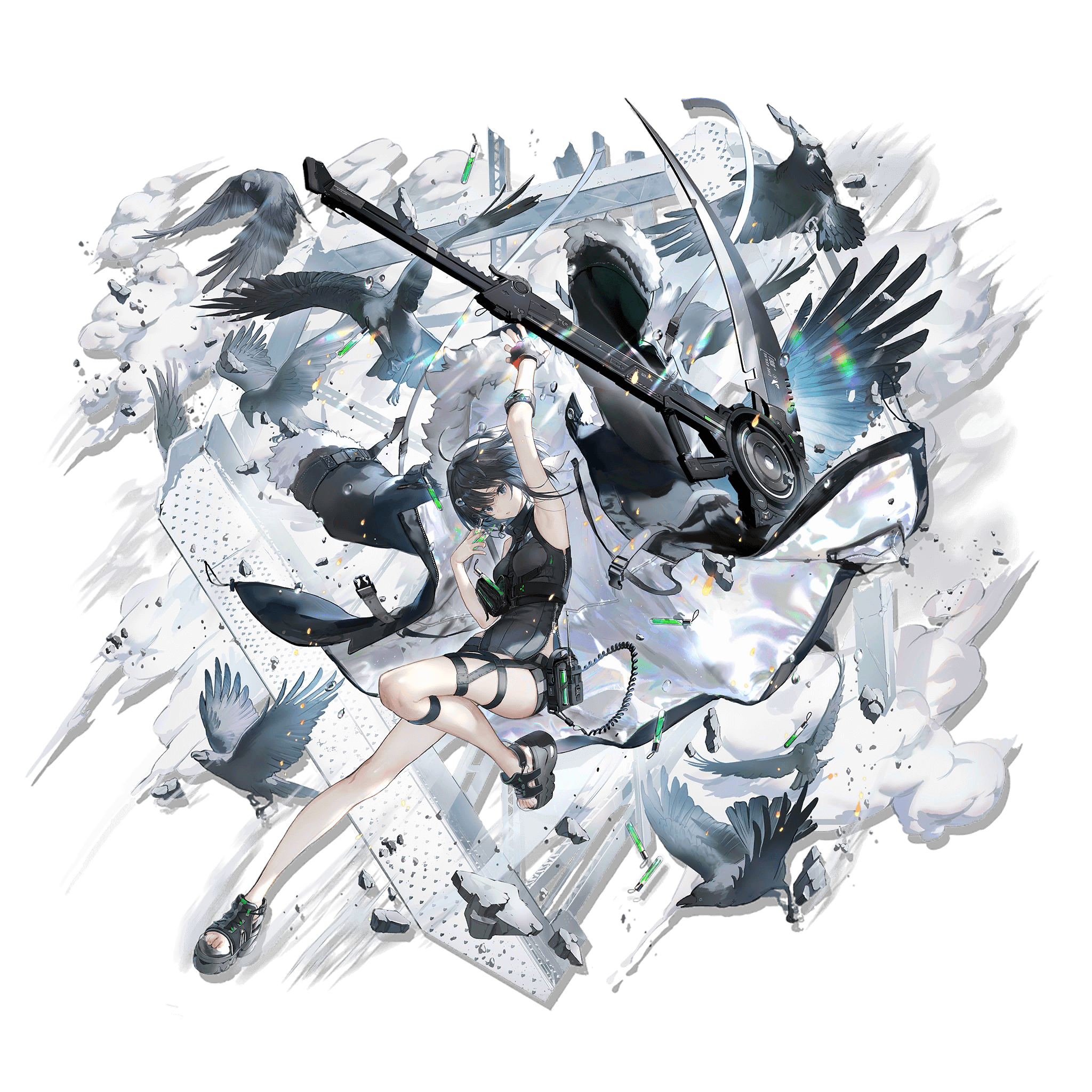