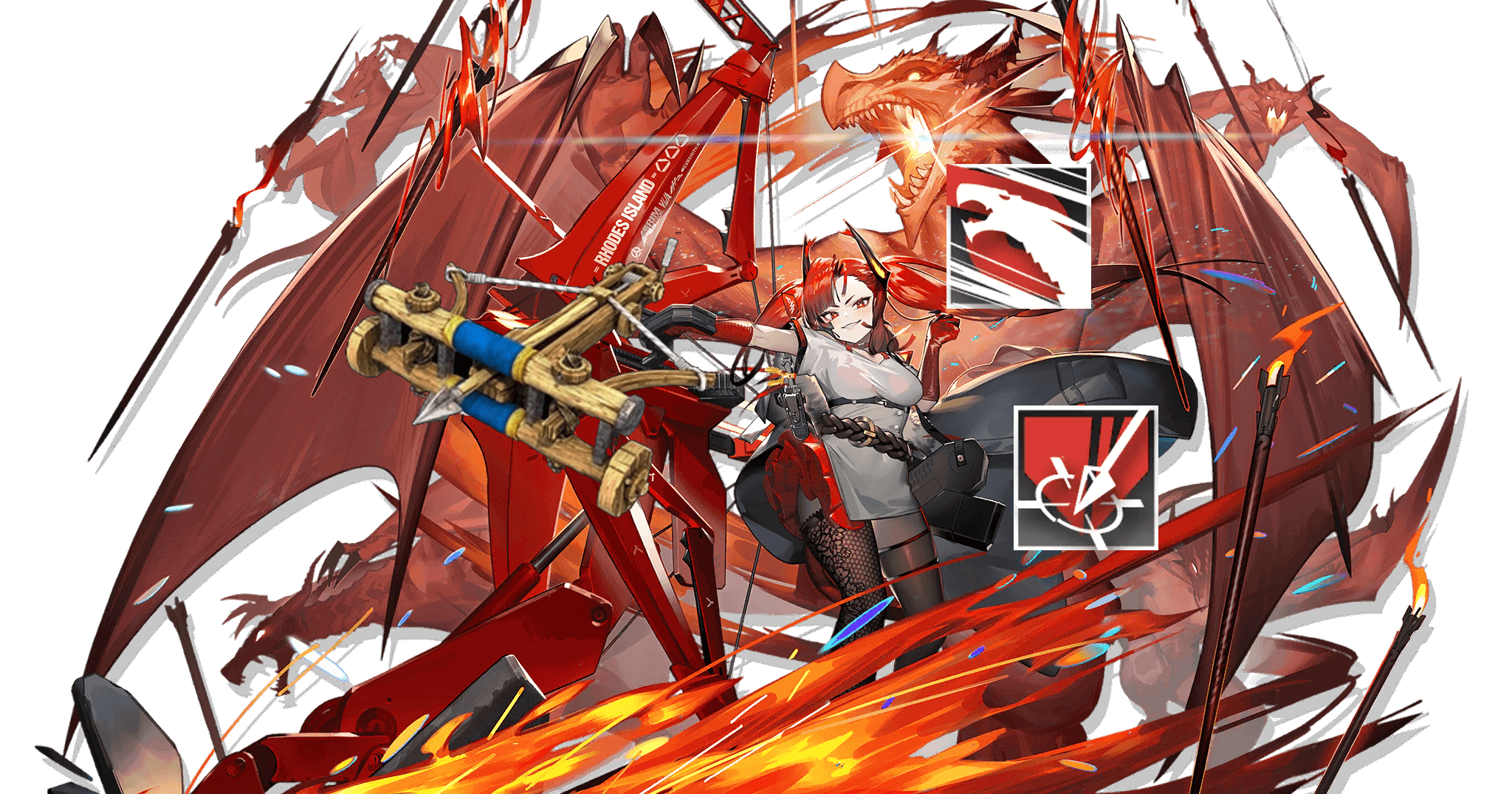 Hello again after a while! I’m here to deliver to you another guide for, guess what, another sniper. This time it’s the second member to join the lonely white bear Rosa in the Heavyweight/Siege Sniper archetype (or as my Advance Wars-side would call it, Artillery). Unfortunately, Toddifons shows up in the worst banner ever, despite bringing with her some unique attributes to the game.

Toddifons is the second Heavyweight/Siege Sniper in the game, the first being Rosa. Unlike Rosa though, her specialty isn’t to deal with anything heavy. She is specialized in dealing with Sarkaz enemies, like how Mudrock takes less damage from them. Her kit can be used to deal with heavies, but it’s not as effective as Rosa. Todd Howard, sorry I mean Toddifons, also provide the first ever “increase taunt” debuff to enemy, and the second unit to have the “ammo” mechanic that Ash S2 has. Additionally, she also has an absurd amount of Attack Multiplier, which let her scale with buffs quite well. Let’s see it in detail now!

Being a Heavyweight/Siege Sniper, her ATK stat is quite high, preceded by Rosa who nearly match Firewatch’s base ATK which is the highest in the game (no Iris and Indigo don’t exist lalala). Being a 5*, she then ranks a little lower, losing out only to all of the Deadeye Snipers and Eunectes.

Her attack rate is the same as Rosa, once per 2.4s, which is quite long, but faster than Deadeye Sniper, Medics, and most AoE archetypes.

Being a ranged unit, you can safely assume her defensive stats aren’t going to be amazing (except for Rosmontis, Modal/Aura Caster, and SpreadShooter). Within the sniper family, her HP stat sit comfortably in the middle. Her DEF is also awful and is on the lower end of the sniper, but as I’ve said many times, between the snipers, or even between ranged units, the DEF difference doesn’t truly matter, they all sucks.

Her range is also similar to Rosa, which then set this archetype to have this type of range as a default.

Note that unlike Spreadshooter, this archetype cannot hit enemies directly on top of them (like drones or in CE-5 type map).

This is the defining characteristic of the archetype. Rosa has a talent that allows her to deal with them quite nicely, but as I said, Toddifons doesn’t have too much to deal with them, which I will discuss more with her kits later on.

- Available at E1: When attacking Sarkaz enemies, increase ATK to 130%.

This is the main identity for Todd. She deals a lot more damage to Sarkaz enemies. The thing is, she still prioritises heaviest enemies first, and most sarkaz are weight 2, except for the Centurions, Grudgebearers, and the 2 Knights in Maria Nearl event. Weight 2 is fairly average, so most of the time she will prioritise someone else or just have normal priority.

There are quite a decent amount of Sarkaz enemies in this game. You will see them the most in Darknight Memoir, Windswept Highland, Chapter 4, 7, and 8 (perhaps even in future chapter since we are moving toward Kazdel). However, over the total population of the entire game, their appearance are little in relation with how many events we've had for the past 2 years.

This talent is an Attack Multiplier, so it stacks multiplicatively with Attacks Buffs, AND with other Multipliers as well.

Always Available – Fusion Crafting: When this Operator is assigned to the Workshop to process Elite materials, reduces the Morale consumed by all corresponding formulas that cost 4 Morale by -1.

Available at E2 – DIY Oriron: When this Operator is assigned to a Workshop to process Oriron-type materials, the production rate of byproduct increases by 90%.

This is the same pair of base skills as Aosta and Chiave, giving bonus to Ester and Device respectively, and same %by-product as Mudrock with rock as well. Now with Todd, we have one for Oriron. 90% is obviously better than 80%, but they are only specific to 1 material, and required an E2. Meanwhile Ceylon has 80% for free, or Catapult and Sussuro have it with E1.

The morale reduction is good for when you want to craft T4 materials (from blue circle to purple), but morale can be recovered infinitely so unless you need to have a big amount fast, it won’t be helpful much.

Also I don’t think we’ll have one for Manganese, Grindstone, RMA, Gel, and Crystal, since those things don’t have a T2 equivalent. So it’s just Aketon and Sugar left.

Also also, a 90% rate resulted in a 19% chance to get a by product, because it adds to the base amount of 10%, so it’s technically only 1% higher than the aforementioned 80%.

Mark an enemy (prioritise sarkaz → heaviest → normal) for a duration. Marked enemy is easier to be targeted by allies and have -25% DEF. Then for the same duration, each Toddifons’ attack deal 150% physical damage. 29 SP cost, 12 initial SP, 20 seconds duration.

The mark has a very obvious symbol. It looks like this

This is the first skill in the game to modify taunt level and can redirect attack of allies. Except… not really? When they said, “easier to be targeted by allies” they do mean just “easier”.

The DEF debuff last for the whole duration of her skill, which is fairly long. It’s one of the longest DEF reduction skills in the game (losing only to Rosmontis 30s kinda, Schwarz 30s if you stretch it enough, and Pramanix 25s) and the rotation isn’t too awful either. If we remove Sarkaz out of the equation, then heavy enemies usually have high DEF (like I said in the Rosa’s guide), so the DEF reduction do matter here.

At the same time, you’re marking a heavy enemy, which also tends to be chonky in HP. Against operator without special priority going on (i.e. AA Sniper without drones, or operators without any priority), if they aren’t well equipped to deal with them, it could backfire. Imagine Exusiai unload her barrages to a Defender, for example.

The mark also doesn’t refresh when the current one die, so if you kill them fast, Toddifons will only have the damage increase for the rest of the duration, which is bad, because her next skill does that much better.

When you want to redirect fire to a heavy enemy or any enemy that you know Todd would mark.

My favorite is Ash S2 for this strat. One of the problems with Ash S2 is that she doesn’t prioritise the enemy that she stunned so occasionally it could be screw up (as said in her guide, either non-stunned enemy walk ahead of the stunned enemies and take priority, or drones come into play). Before, this is solved by carefully use the skill when it’s opportune. Now you can safely use this skill to aim Ash S2 (just be careful if drones are around). With enough levels, Ash is great at killing even defenders, especially when the mark also reduces DEF, so the combo isn’t all that bad.

Another case for this skill would be against bosses. Bosses in general has high weight (CS lul), and also tends to have high DEF, and also also tends to take long winding path which lowers their normal priority.

I did harp on the “special priority” from operators a bit too much. But there aren’t many of those to be honest. Casters in general has no special priority (except Ceobe's any skill and Steward), and their Arts damage is good for killing heavies. Close-Range Sniper are also good for this as well with no priority and the ability to punch through armor.

However, it could backfire as well, AA Snipers without drones have no special priority, so they usually would follow the mark. But AA Snipers also deal low damage but fast, and the marked enemy tends to have high enough DEF that maybe -25/30% DEF couldn’t help them.

So yes, this skill is a double-edge blade, be careful when using it.

Slightly increases attack interval, fires Dragon Arrow that deals 210% physical damage, that also explodes after a while, dealing 70% physical to enemies in range.

This is the second skill in the game to have the “ammo” system, Ash’s S2 being the first one. Todd only get 10 ammo, but unlike Ash S2 who uses 31 bullets in 6.2s, Todd needs roughly 5 times as long to empty her meager stock.

The delay for the explosion is 1.5 seconds, affecting both the primary target and everyone around it in a 1.2 tiles radius.

If the hit enemy dies by the first impact or during the delay, the explosion immediately occurs, just like W’s S3.

The skill is an Attack Multiplier, which multiply any buffs she gets. In combination with her talent, it can multiply a buff really hard with 1.45 * 2.4 = 3.48 times. You may think it’s only for stacking buff meme, but just a single buff like Warfarin is amazing with it because her +90% is now +313%, or more practically, just a simple +8% from Schwarz is now 27.84%, or 7%/14% from Guard Amiya become 24.36%/48.72%. Against non-Sarkaz, it’s still a fairly impressive 2.4x multiplier. The explosion part of the skill though, we can safely ignore it.

It’s a skill that gives damage over a duration and nothing else. Whatever I can think of, you most likely already thought of. Unless if you don't know about the future unit Ch'en The Holungday, where she can make use of her ammo stuff more.

The only advance mechanic is the manual deactivation, which allows an earlier recharge after Todd’s done killing whatever you want her to kill and be prepared for the next wave earlier. The 40 SP cost does it make hard enough to time but hey, it’s better than having to wait for the skill be over to recharge.

The high % of damage does allow Todd to punch through the high DEF of the heavies, given her high base ATK. And again, it does multiply a lot of buffs so she punches really hard with some extra ATK. However, I think I'd still prefer Rosa lower % damage but ignores 60% of DEF.

The splash only deals 80% ATK, and for physical damage, it is really bad against high DEF. Haven’t I said something about heavy enemies having high DEF? Heck, it doesn’t even feel impactful to AoE clear trash mobs either. Against Sarkaz though, who tends to have low DEF, it is quite okay because of her talent.

Not available yet. Check back after it is released.

Toddifons specialises in killing Sarkaz because as mentioned a few times already, she has a really good multiplier against them. Outside of that scenario though, her effectiveness really depends on situations, which I guess is like most other average/decent operators out there.

However, Toddifons is not without an achievement. This amazing Rosa+Todd clear in R8-8 is a great showcase of her massive range advantage and the high damage per shot to punch through the drones.

That should be it for Toddifons. Her unique mechanic turned out to not be that shiny or amazing, so her best skill ended up being just a DPS boost. She does look hella cool though. Anyway, how do you find Toddifons so far? I find her cool as heck, but unfortunately for her, Rosa exists and she’s just a little less cool but more useful in general. Also I had high hope for her S1, but oh well.

Thank you for reading and I’ll see you next time. Hopefully not a sniper.