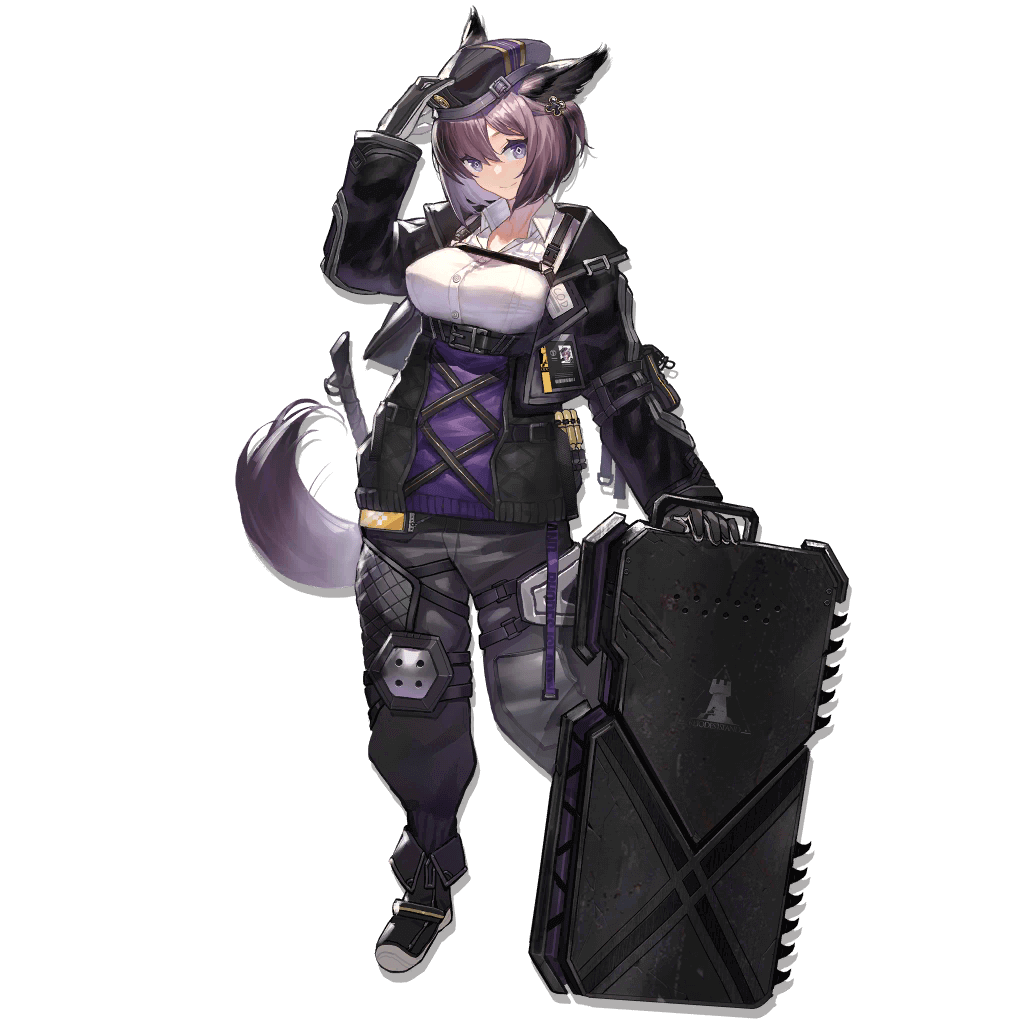 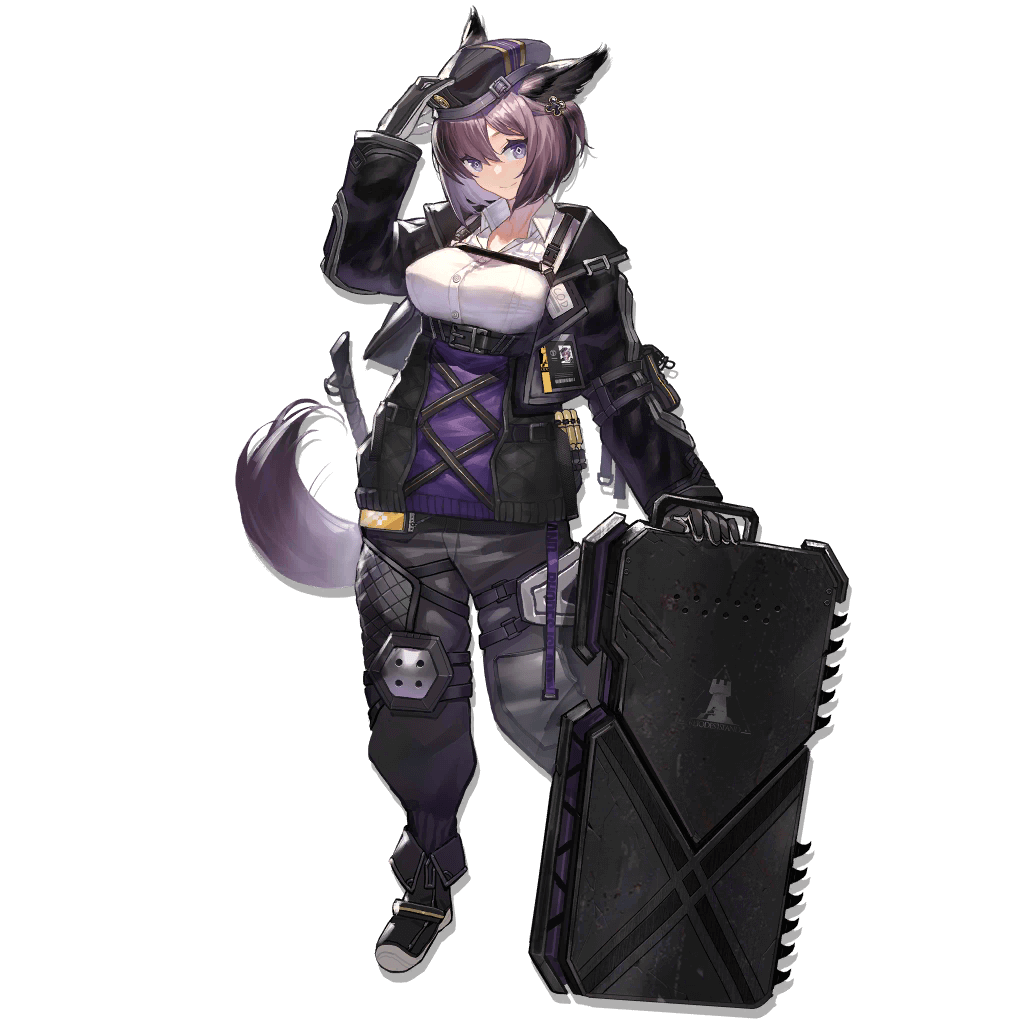 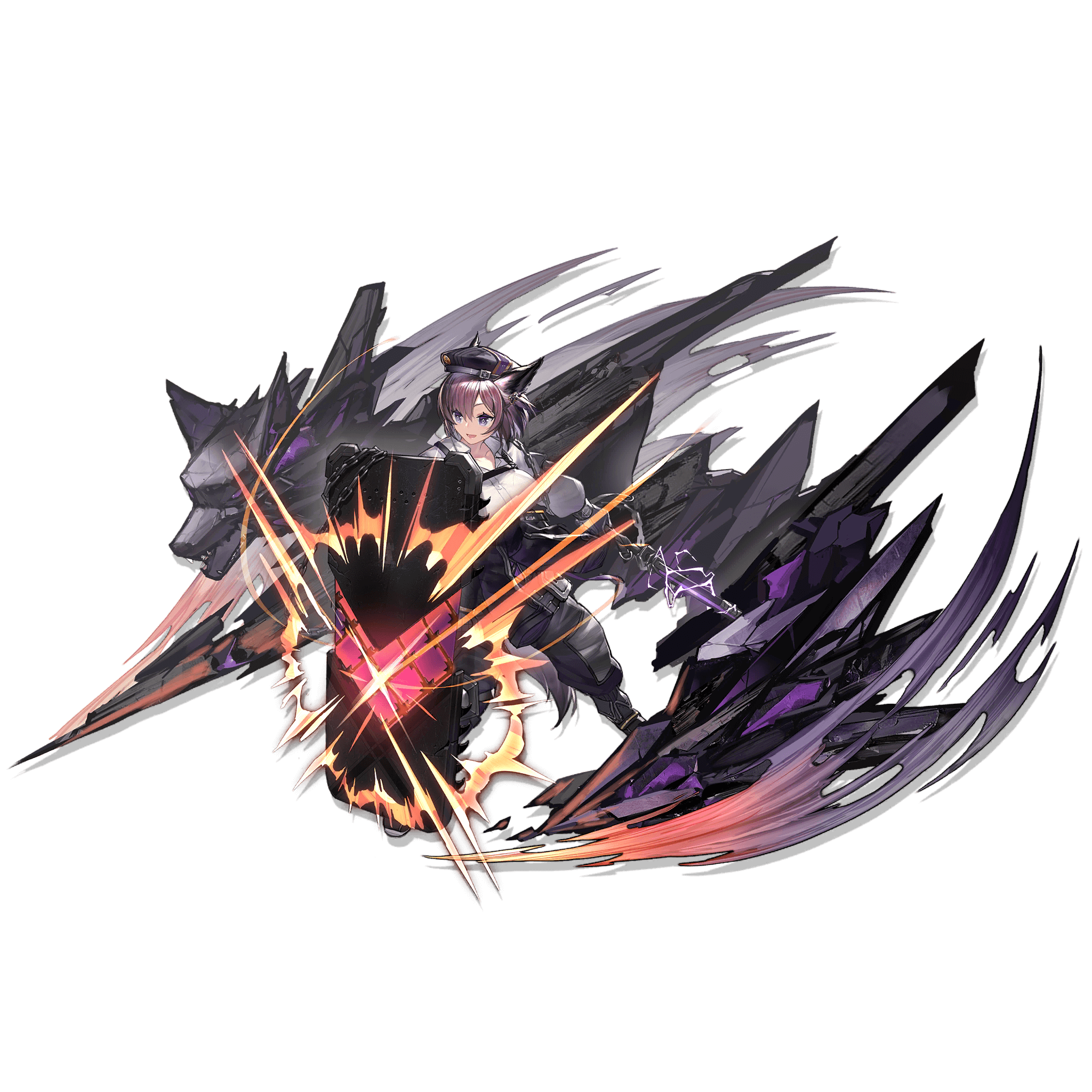 Normal attacks deal Arts damage while the skill is active

Dur-nar, Defender of Rhodes Island, vows to stop all rioters with her shield.

Those foolhardy enough to try to overcome her shield soon find themselves eating dirt. 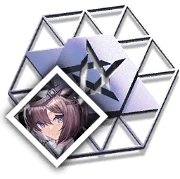 Dur-nar's Token An abandoned electric blade. One must first understand loss to understand what it means to treasure something.
Potentials

When this Operator is assigned to be the Trainer in the Training Room, Defender Operators' Specialization training speed +30%
Snack Network Lvl: 1

+ Trait: When Skills are active, attacks do Arts damage
+ 15 base RES
+ A DPS Defender (rare) with high base ATK
+ Very easy to obtain and max potential from purchase with Friend Credits
- For a Defender, has extremely low DEF, high Deployment Cost, and long Attack Interval
- No team utility other than DPS

As Dur-Nar is a connoisseur of both food and fashion, Rhodes Island Operators rely on her to find their favorite snacks, especially ones that are out of season or out of stock. (They may also depend on her to give Orchid a run for her money in the “sweet hat” department.) More importantly, they rely on her on the battlefield, where she is fielded as a 4★ Normal Defender Operator… one who, unusually, focuses on DPS and dealing Arts Damage rather than on defense.

A lot of Dur-Nar’s power stems from her Trait: while her Skills are active, her normal attacks deal Arts damage instead of physical damage. Her Skills play to this by enhancing her ATK: in particular, her Skill 2, Shielded Counterattack, not only offers a large ATK boost but also causes her to attack a number of enemies equal to her Block count (like an AoE Guard). As a Defender, Dur-Nar can Block-3 by default, so with this Skill active, she can tear through a wave of enemies in no time flat. Because AoE Guards take a lot of investment before they can Block-3, Dur-Nar can be an excellent unit for early-game players who lack AoE damage.

Unfortunately, this power comes at a price. Dur-Nar has no damage-mitigating Skills or Talents, and her HP and DEF are unimpressive for a Defender (though she does have some RES to compensate). Her ATK is very high for a Defender, but still lower than pure DPS units (i.e., equivalent-rarity Guards). She also has a high DP cost, and her Attack Interval is slower than Defenders or AoE Guards, which reduces her DPS potential. Finally, her Skill 2 only charges SP when she is attacked by enemies, so it doesn’t charge between enemy waves, which can be an issue when her damage relies upon her Trait so heavily. It’s a lot of weaknesses to surmount, but consider the benefit: an AoE Arts damage Operator who can Block-3 at base level and be deployed on ground squares! Especially on stages where Casters are banned or ranged squares are in short supply, Dur-Nar can be well worth her drawbacks.

In the early game, where blocking is more prevalent but incoming damage isn't very high, this kind of blocker/DPS combo can be quite effective. Also, the melee arts damage can be useful for limited rosters. She is easily to acquire and max potential through the credit store. Keep in mind that she will fall off in later game as players gain a more diverse roster and enemies start hitting harder.

Dur-nar is a really useful unit for her rarity. The AoE Arts damage on a long duration skill is very useful, and rather uncommon to boot. However, Dur-Nar really doesn’t really need extra investment to do that, so like most 4★s, the promotions beyond E1 are a luxury. S2 is the clear choice if you wanted to push her beyond that; it represents some pretty decent gains.

Dur-nar was once a lieutenant in Columbia's standing army. For unknown reasons, she was discharged from military service and through regular recruitment channels, she joined Rhodes Island. She has serves as a drill instructor and defensive operator. She excels at using a specially-constructed shield for protection and at finding opportunities to strike enemies with her electric blade.

[Blood Originium-Crystal Density] 0.16u/L
Patient has extensive combat experience and bears scars of injuries from Originium. However, there is currently no sign of infection. Periodic examination is recommended.

Increase Trust to 50.
The upright and candid former soldier is now responsible for mid-level standard courses at Rhodes Island and is also an instructor for introductory courses in heavy armor. Dur-nar previously served in Columbia's army, where she saw plenty of combat and gained a reputation as a highly skilled warfighter. She is something of a foodie, finding the greatest joy in life comes from what she puts in her mouth.

Increase Trust to 100.
Due to the medical unit's (especially Hibiscus) strict management of provisions in addition to Dobermann's strict requirements for newly inducted operators, even if snacks were placed on Rhodes Island shelves, that does not guarantee that new operators would be able to get their hands on them, much less happily scarf down entire bags. Fortunately for everyone, there is Dur-nar. Through her connections in the logistics department, she has organized a snack network that spans the entirety of Rhodes Island. She spares no effort to provide everyone with the most delicious and cheapest snacks. She cannot hope to compete with 'hidden enemies' in a battle of wits and bravery, but her original intention was merely to add some happiness to the lives of those at Rhodes Island, anyway. On this basis, the managers have turned a blind eye to her activities. Besides, Dobermann's favorite food is actually -- (this record has come to an end suddenly and inexplicably)

Increase Trust to 150.
Dur-nar is acquainted with Frostleaf, and it was clear from their first meeting at Rhodes Island that their memories of each other may not be pleasant. But time heals all wounds, and the two are no longer the warriors crossing swords that they once were. They have agreed to let the past be the past, and hold on tight to the life they had spent their youth chasing. After a period of warming up, and a bit of friction, Frostleaf came forward with a proposal. She invited Dur-nar to join her on a mission; an invitation the latter gladly accepted. Some people might not understand why a loner like Frostleaf would ask for a partner, but Dur-nar knew the reason: only those who are willing to atone for their sins can be trusted to stand together.

Increase Trust to 200.
Dur-nar was once a most troublesome soldier, a thorn in the side of her commanders: she was an unsurpassed warrior, but would not listen to orders. When the brass had had enough of her stubbornness, they gave her a promotion, sending her to manage a squad of fresh recruits. She trained the kids, with great frustration, and they in turn changed her disposition. In time, she grew to accept the soldiers as her own. For the sake of their training, she traded her dual electric swords for the sword and shield combo she uses today. She put her heart and soul into her men, right up until the point when the brass decided to send them on a suicide mission. Dur-nar was beside herself. She flew into a rage and assaulted a suprior officer. She has been unwilling to discuss the events that followed. According to certain documents we've acquired, she was forcibly discharged. She then went through a period of hopping from security to police to mercenary work for short stints, up until she arrived at Rhodes Island. When the Doctor asked her in private why she had come to join Rhodes Island, she produced a letter. It was a letter of thanks from the few survivors of her squad of trainees. At the end of the letter, the Doctor fixated on a particular sentence, 'If there were a place where the command actually cared about the grunts, would you give it a try?' After that was an address to send her resume to Rhodes Island, along with all the names of the survivors.

Upgrade to Elite LV2.
'I saw her. If I'm not mistaken, at that time, she was still known as 'Patrick's Spring.' If you mentioned this code name to any of the senior officers, I guarantee you their eyes would light up. She was that famous. You didn't know that? Oh, of course. You're not from Columbia. Have you heard of the Springtime Offensive? Yes, that's right. THAT Springtime Offensive. Both sides were still getting ready for battle. She picked up two electric blades all by herself and went charging at a group of enemies. I've never seen someone with such an outstanding character as that. The enemy never knew what hit them. The rest of our troops followed her lead, and that was that. The enemy was finished. Yes, she's a strong one, all right. She can do anything. She's just not great at obeying discipline. She really gave those old guys a hard time. I still remember the looks on their faces at her award ceremony. It was something to behold. For a period of time, all of Columbia's recruitment materials had her and her alone on them. It's a shame that I never heard much about her after she moved units. Oh man, she's with you guys. How did you manage to recruit her? My companions have been looking for her for a long time. Even after all this time, she probably fetches a huge commission. Oh, it's time to go. Shift's up, I need to withdraw. Come by and talk more the next time you get a chance. It's a date.'

Stage Name: mem_durnar_1
Unlock: E2, Level 1
Description:
Raising a firm shield and facing the enemy is only the first step. When to draw, when to ram, when to defend—every step requires consideration, and for Dur-nar, these considerations have long since become conditioned reflexes. As a soldier, she never feared standing against might nor skill, and as an Operator, she uses her shield to bring protection to others.
Her blade is still keen as ever, her shield still as firm.