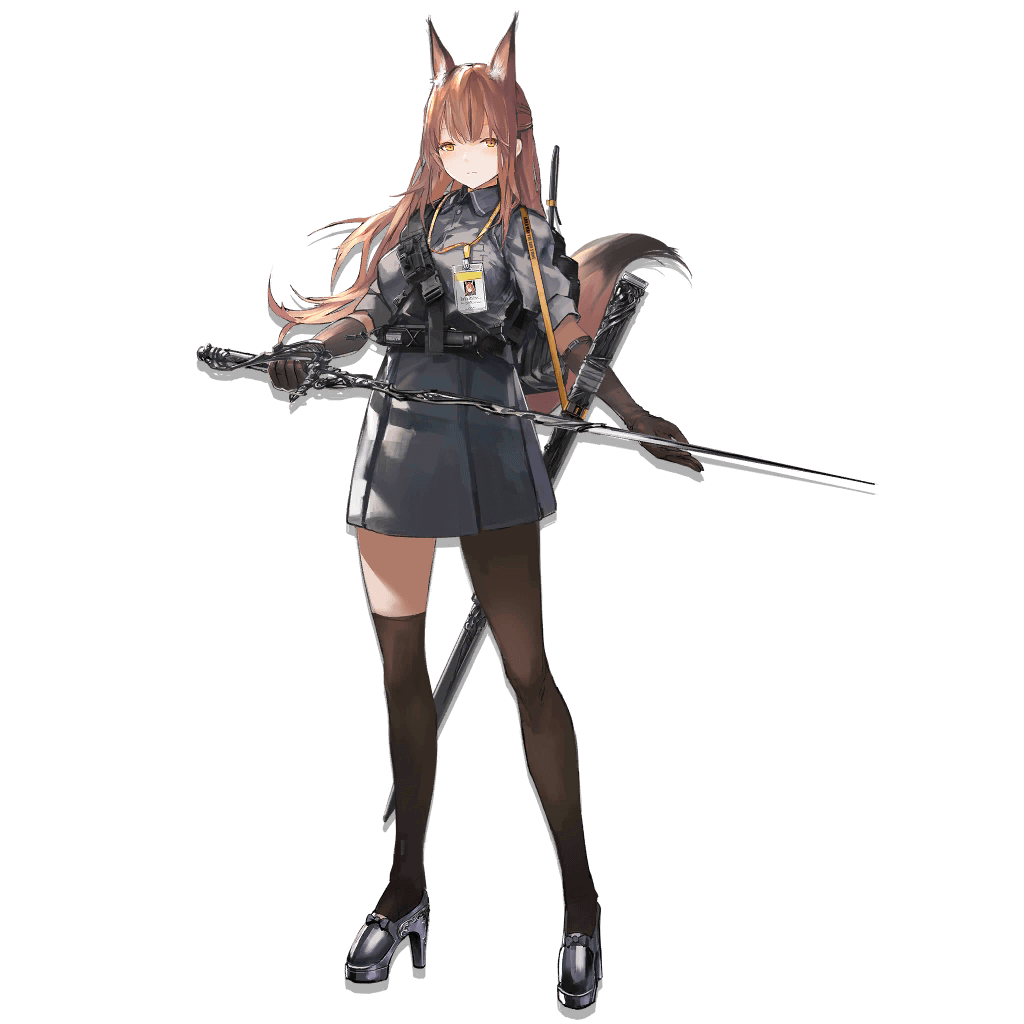 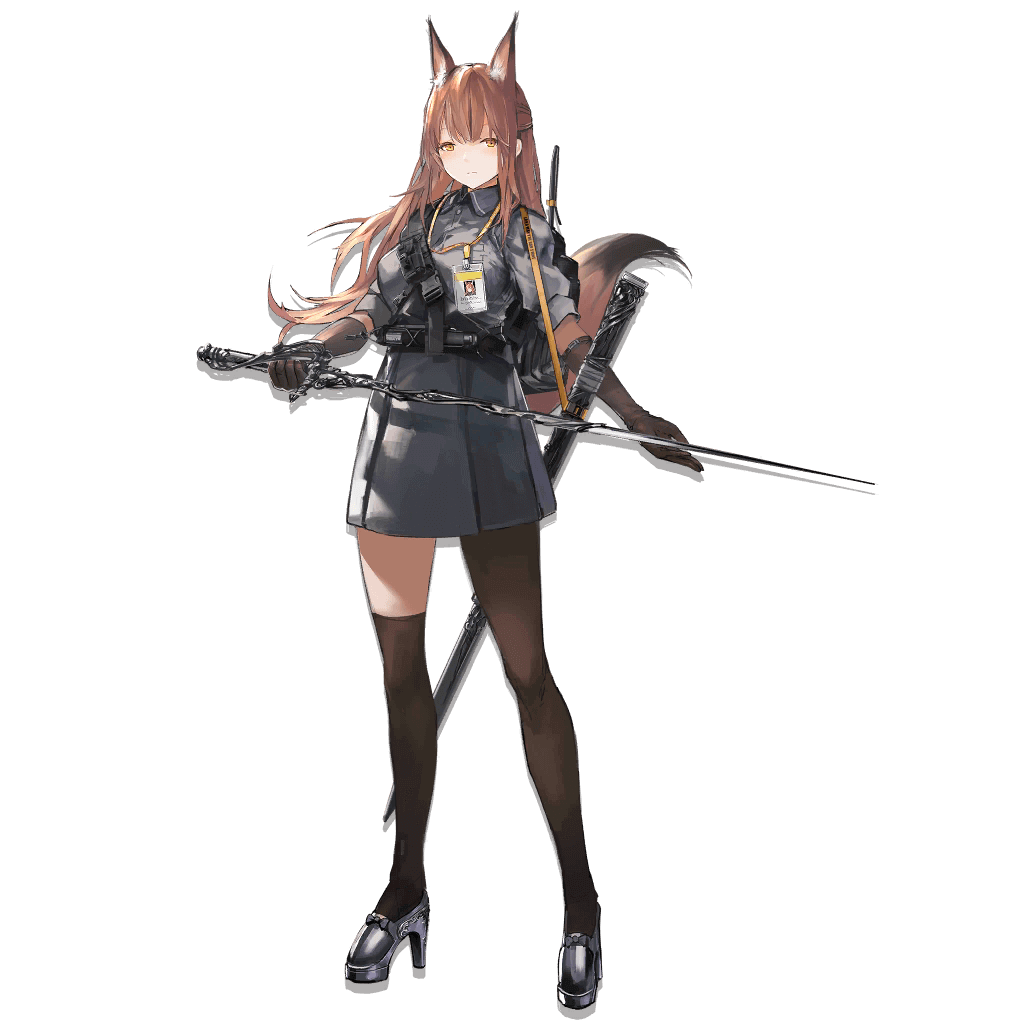 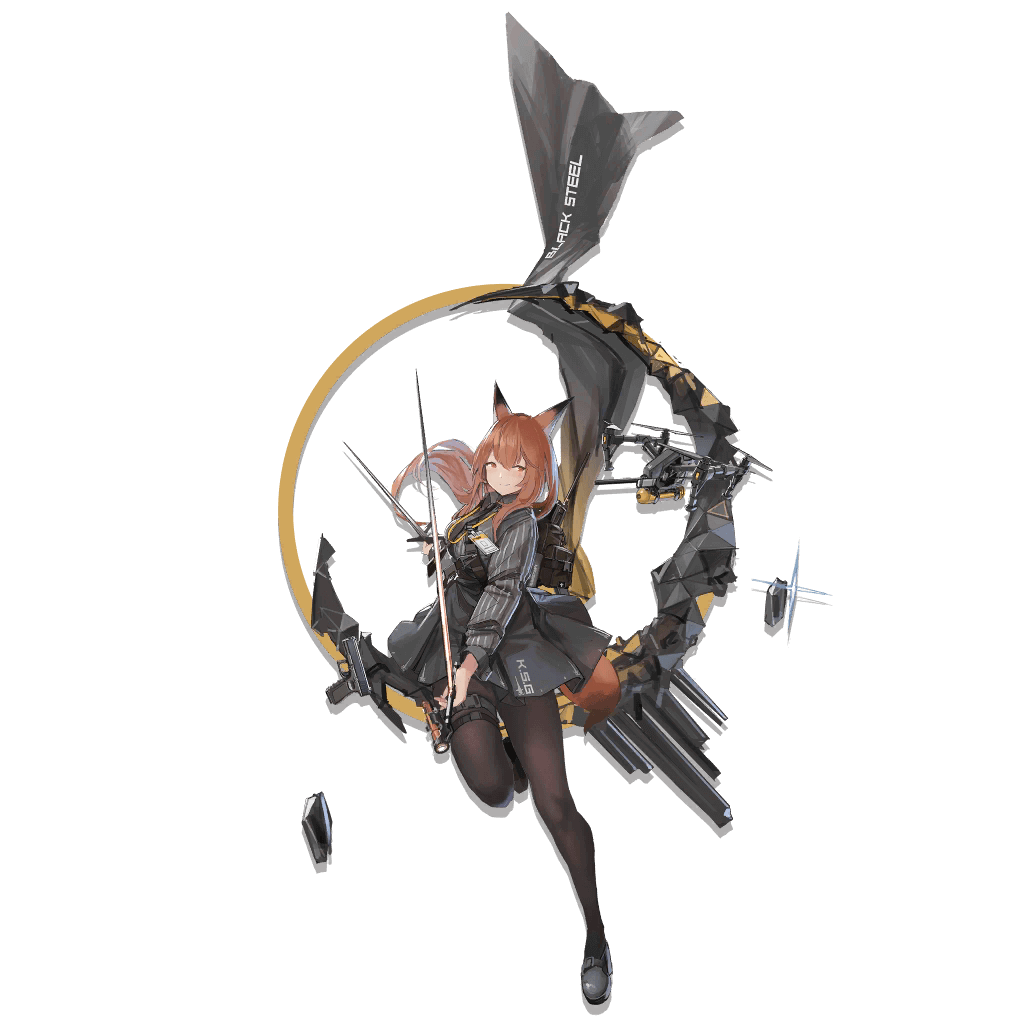 Franka, Guard Operator of B.P.R.S. of Blacksteel, is waiting for your orders.

This scorching thermite blade shall penetrate all defenses. 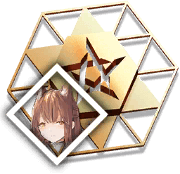 Franka's Token An itinerary. There are too many destinations on it so it's hard to stick to it.
Potentials

Has a 10% chance to ignore the target's Defense when attacking
Info
Thermite Blade
Lvl: 1

Cutting-edge Thermite Unit Lv. 3
Attacks have a 28% chance to ignore the target's DEF

When this Operator is assigned to be the Trainer in the Training Room, Guard Operators' Specialization training speed +30%
Guard Expert β Lvl: 1

When this Operator is assigned to be the Trainer in the Training Room, Guard Operators' Specialization training speed +50%
Clue Search α Lvl: 1

When this Operator is assigned to the Reception Room, Clue search speed increases by 10%
B.P.R.S Lvl: 1

When this Operator is assigned to the Reception Room, Clue search speed increases by 10% and it's easier to obtain the clues of Blacksteel Worldwide (Clue 3)

+ Talent: Chance to ignore DEF on attack
+ Good option vs the very heavy armored enemies with 2k+ DEF
+ S2: makes her DEF ignore very consistent
= Duelist Guard: Block-1
- The big tanks tend to have high physical damage, making your Medics work overtime to keep her alive (especially during S2)
- Most of the time it will be easier to use Arts damage against high-DEF

Franka has extremely high Attack, giving her exceptional sustained DPS.  Her Talent, Thermite Blade, and her second Skill, Vorpal Edge, combine to give her fairly consistent Defense-ignoring damage, making her an excellent tank killer.  She can only block 1, but her job is typically to take down enemies quickly rather than delaying them.

Since armored enemies usually hit rather hard and her S2 has the drawback of reducing her own Defense to 0, Franka needs a lot of support to stay alive if she is required to block as well as kill them.  Thus, if you need a unit to block armored enemies, it’s usually better to go with a Defender who can survive their attacks. That being said, however, Franka’s sheer DPS output makes her an excellent Guard who scales well into end-game content.

If you need to ignore DEF, use a Caster, Arts Guard, or any other Arts damage.

Way back at launch, it used to be a matter of trivia that Franka didn't actually do True Damage. There just wasn't any place where that distinction mattered. Since then, real True Damage has grown in value, which hurts the already off-meta Franka. Her relatively low total damage and RNG component just don’t justify the “not-true-True-Damage” utility. Still, her S2 Masteries represent some important gains, both in damage, but also in the initial SP at M3, so if you're intent on using her, it is a Mastery worth considering.

Franka, biohazard protection and response specialist for Blacksteel Worldwide, is very experienced and proficient in VIP protection, raid, and combat support operations.
She is currently undergoing treatment for Oripathy at Rhodes Island and providing professional security as a Blacksteel Operator.

Increase Trust to 50.
Blacksteel, aka. Blacksteel Worldwide, is a contractor whose core service is providing private security services. Headquartered in Columbia, Blacksteel is now riding a crest thanks to the growing business influence of Columbia.
To combat the Originium infection crisis, Blacksteel set up a special unit known as the 'Biochemical Protection Response Staff' (BPRS). Operator Franka is a member of this unit tasked with guaranteeing the safety of all Bio Department operations.
Unlike most Blacksteel specialists who are always serious to the point of being dour, Franka seems more light-hearted, progressive, and is even a bit of a prankster--her victims including both enemies and her own colleagues.
No matter the situation she faces, Franka is able to keep calm and persuade others to trust in her calculated words.
For a professional Operator, Franka submitted a relatively truthful personal profile and resume, as well as a standard cooperation agreement, voluntary treatment waiver, and other binding contracts. Based on that, Franka may be accorded the appropriate level of trust.

Increase Trust to 100.
Franka's combat style is often considered enigmatic and unpredictable, as befitting her peculiar personality. Rather than dealing the most damage, she focuses on making herself come off as 'harmless.'
Franka's weapon of choice are a rapier and a dagger. She favors a rapier forged from Originium that, when combined with her own Originium Arts, absorbs a huge amount of heat (while still retaining its shape). It is especially effective against targets in heavy metal armor. It is very easy to overlook her light gear and weapons, leading to a gross underestimation of her combat prowess.
On the other hand, the close-up melee style she prefers also can put her in peril. While she may be good enough to end the enemy before her life is threatened, to alleviate concerns, the head of the BPRS project teamed the smart but radical Franka with the level-headed Liskarm, making them a complementary duo in combat.

Increase Trust to 150.
As shown in the limited files provided by Blacksteel, Operator Franka contracted Oripathy during an escort mission for the BPRS Department (project designation and actual operation are both classified). Blacksteel used newly acquired intel to contact the little-known Rhodes Island Pharmaceuticals and arranged on-site treatment for Franka, also seizing the opportunity to reach several agreements with the company.
Franka's arrival filled a gap in experienced Operators for Rhodes Island, and she shows great interest in her new surroundings in return. Her professionalism helped her integrate in no time, making her an essential part of combat missions. The mood on the island, in turn, has felt the impact of Franka's presence.
For example, during her tenure as the swordfighting instructor for reserve Operators, she 'initiated' every newbie in 'Columbian style training', i.e., hazing. At the same time, she held almost nothing back in passing on her knowledge and experience to the rookies.
To those on the island, their biggest impression of Franka, besides her professional combat instruction and unique combat style, is her regular clashing with her partner Liskarm.

Increase Trust to 200.
The bond between Franka and Rhodes Island hinges solely on the agreements between Blacksteel and the company. She seems more and more like a Rhodes Island Operator each day now, though, and she is quite proud of that.
Oripathy has not bothered Franka in any way so far. She still goes about life in her own unique way, busy with work and combat, while continuing to look for fun and excitement on the job.

Record: Symbols of the Past
Unlock: E2, Level 1, Trust Required: 50

Stage Name: mem_franka_1
Unlock: E2, Level 1
Description:
Franka is trained to find the enemy's weakness.
Armor has no meaning when facing her.