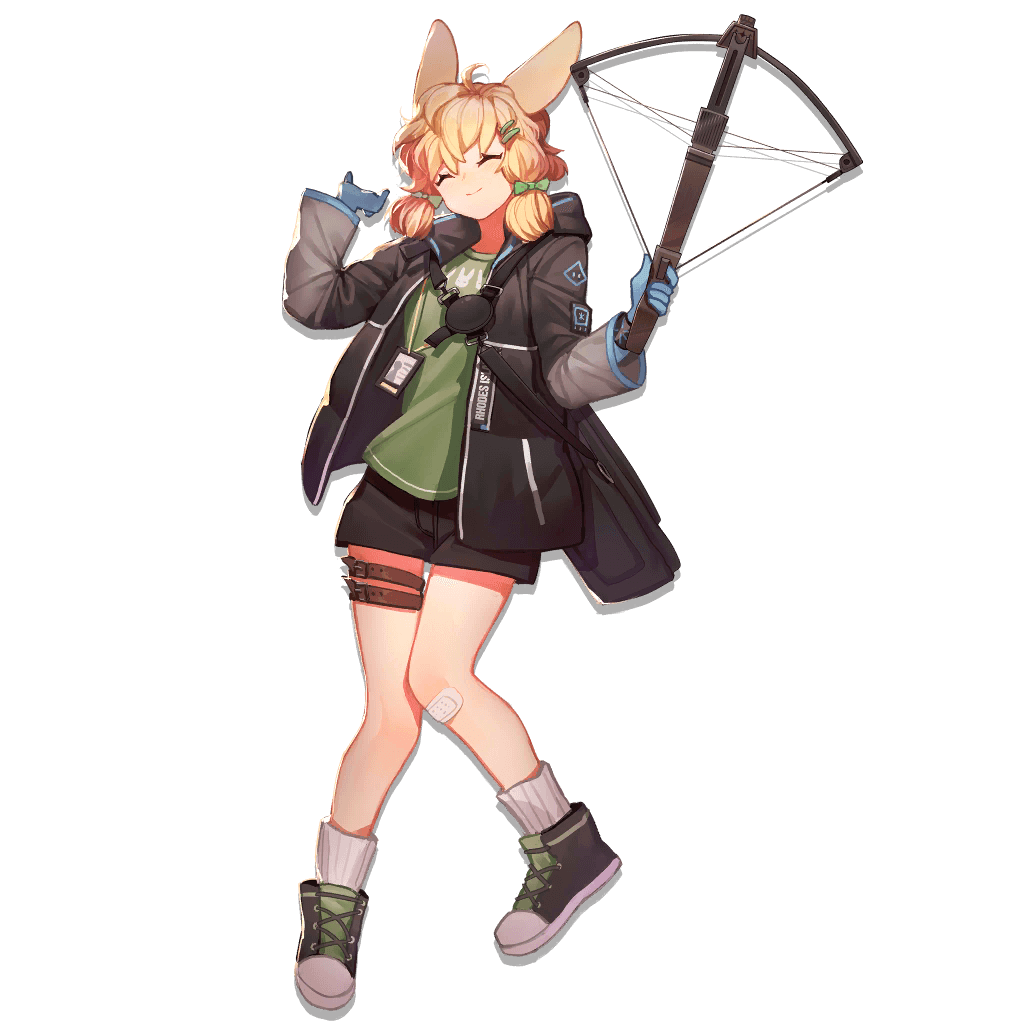 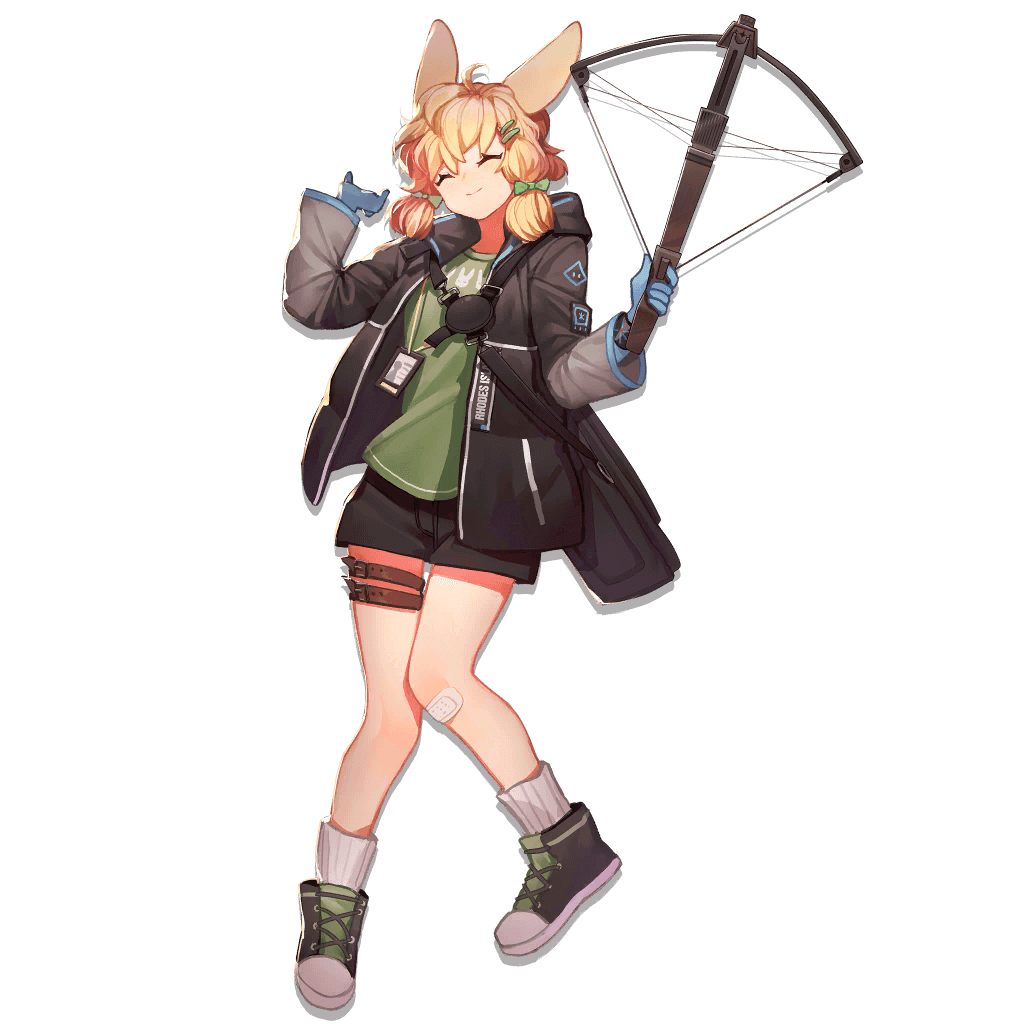 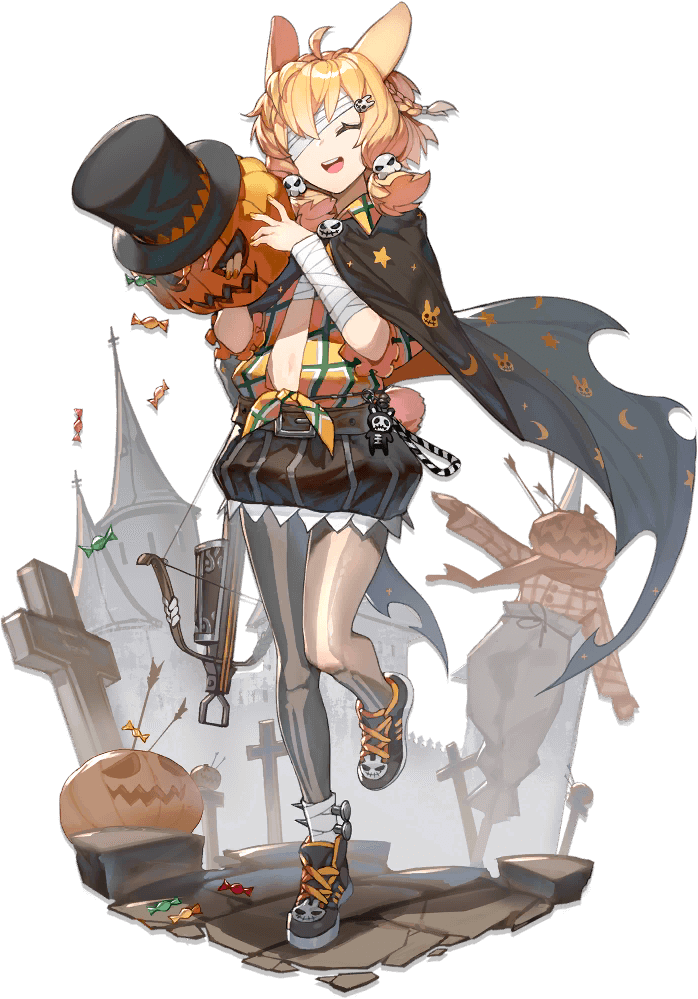 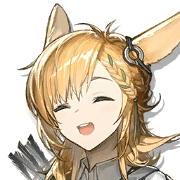 Kroos, Sniper Operator of Rhodes Island, will interrupt the enemies' attacks with her crossbow.

She is always aiming at her target. 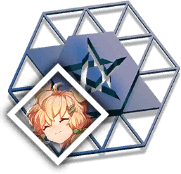 Kroos's Token A collection of shooting toys, including a plastic bow, several sucker arrows and an apple to be used as a target.
Potentials

When attacking, has a 10% chance to increase the current damage of that attack to 150%
Info
Targeting - Primary
Lvl: 1

When attacking, has a 20% chance to increase the current damage of that attack to 150%
Info
Targeting - Primary
Lvl: 55

When attacking, has a 20% chance to increase the current damage of that attack to 160% (+10%)
Info
Talents from Module Upgrades

When this Operator is assigned to a Factory, productivity +15% in the first hour and thereafter +2% per hour, up to +25%
Solitude Lvl: 1

When this Operator is assigned to a Dormitory, self Morale recovered +0.7 per hour

+ Trait: Prioritize attacking aerial enemies
+ Talent: Each hit has a chance to crit for additional damage that makes her randomly hit really hard
+ Great for early Challenge Modes since you need cheaper units and she deals more damage than the 4* Snipers at equal levels
- Says "Ko Ko Da Yo" every 15 seconds

“Doctor, let's play a game~ Put an apple on your head and we'll start~”

Some Doctors disparage Kroos for her drawling voice and her repetitive “Ko~ko~da~yo” catchphrase (which roughly translates to “I’m here” or “Here I am”). However, many other Doctors swear by Kroos as a staple Sniper for the early- and mid-game of Arknights. A 3★ Anti-Air Sniper with surprising burst damage potential, Kroos can even pull her weight in difficult late-game stages, especially if you don’t have multiple higher-rarity Snipers who can replace her.

The trick is in how smoothly Kroos’s kit synergizes with itself. Her Talent, Targeting – Primary, has a random chance to increase the damage of her attacks (like a critical hit in other games). Meanwhile, her Double Tap – Auto Skill automatically triggers every few attacks and causes her to shoot two stronger arrows at once. With her naturally quick rate of fire and the constant extra shots from her Skill, Kroos activates her Talent quite frequently, punching through enemies at a terrifying rate. As a 3★ unit, her cheap DP cost and low investment cost are appealing bonuses, as well as being able to max Potential easily.

Of course, being a 3★ unit also means that Kroos cannot E2-promote, which puts a cap on how much she can grow to help the team. Promotion gives higher-rarity Operators access to more levels and additional Skills, giving them an advantage. On the other hand, many stages are easier if you deploy multiple Snipers, and while Kroos may fall behind over time, she’ll remain an excellent backup Sniper for much longer than you might expect. So look out, drones! “Ko~ko~da~yo!”

Originally from Rim Billiton. Kroos also received her training from the Columbian Garrison at Holmegard with Fang and Beagle. She is calm and constantly smiling as she maintains a gentle demeanor. However, she sometimes breaks her facade, revealing a sharp-tongued, ferocious side.

[Blood Crystal Density] 0.23u/L
Degree of infection is minor and physical symptoms are not yet present.

Increase Trust to 50.
Kroos prefers put in the absolute minimum effort in life and on the battlefield, which is reflective of her weapon of choice - a modern crossbow. Despite her lazy work ethic, Kroos has become a skilled marksman and assists her fellow Operators by flanking the enemy and shooting them in the rear with deadly precision.

Increase Trust to 100.
Ever since she was a child, Kroos lacked initiative. But during training, she showed an exceptional talent for marksmanship. On the battlefield, she effortlessly locates ideal sniper nests and rains down a hail of precise and deadly fire while backed up by her teammates. Both Fang and Beagle trust Kroos with their lives and she is their support sniper of choice.

Increase Trust to 150.
While a member of the garrison, Kroos faced everything with a smile. Upon being infected with Oripathy and suffering discrimination, she had a complete change in mood. After angrily cursing out the other members of the garrison, she along with Fang and Beagle left the garrison for good. In order to find a way for the three of them to survive, Kroos searched far and wide before finally discovering their new home at Rhodes Island.

Increase Trust to 200.
The always smiling Kroos often leaves others with an affectionate impression but does so in order to avoid trouble. She enjoys finding quiet places to slack off and take naps. Although she is typically well-mannered and aloof, when something she cares about is on the line her persona shifts into a more ferocious persona. Even when she is talking, she occasionally displays hints of that ferocity. This facade works on Fang, but not Beagle as Kroos cannot withstand her piercing gaze.

Stage Name: mem_kroos_1
Unlock: E1, Level 55
Description:
This simulation aims to test a decision maker's command capability, a whole team's rapport, and a Sniper Operator's ability to cope under pressure.
Within, Sniper Operators are this simulation's focus target.
Pains have been taken to assemble this simulation's team, and ample personnel are present, but lack direly for long-range output methods.
Focus area has been assigned to Operator Kroos. As her detachment's sole Sniper Operator, her composure and firing skills will determine what direction the simulation's outcome goes.