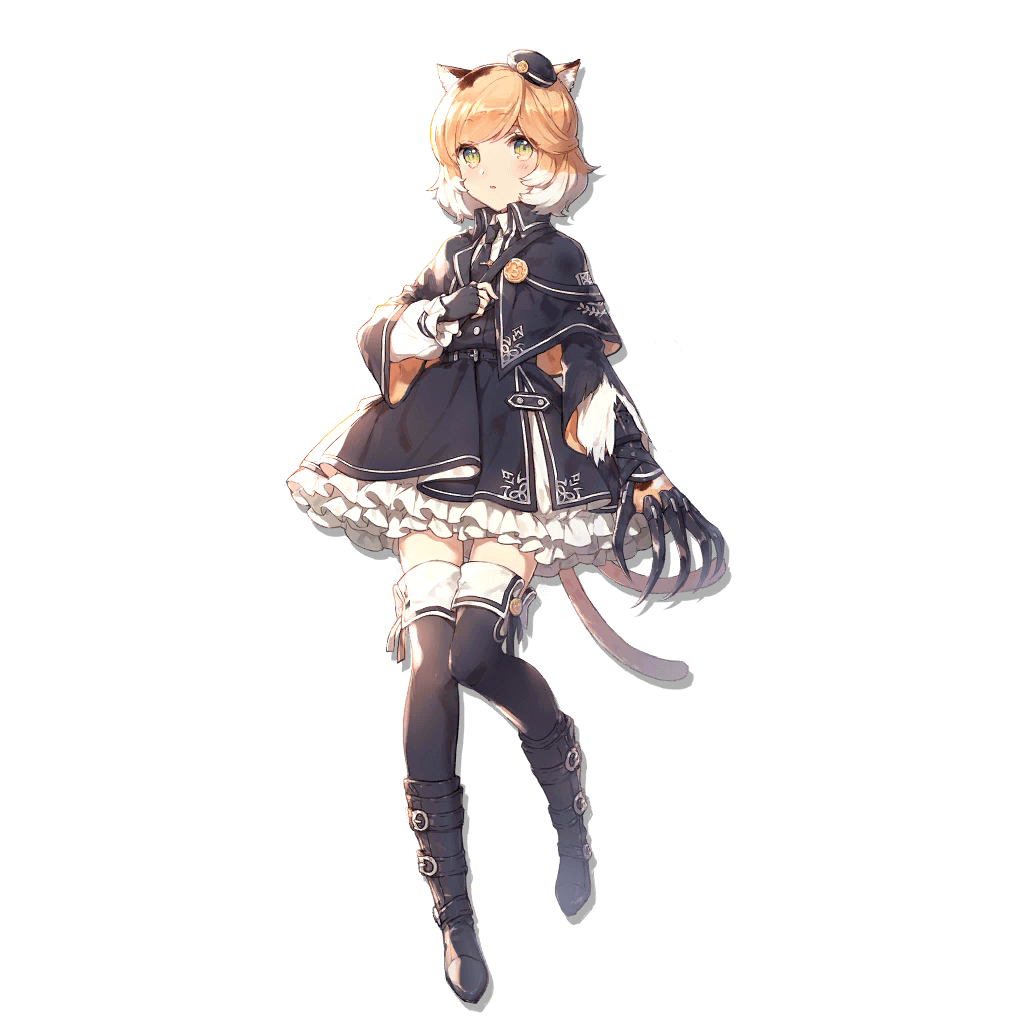 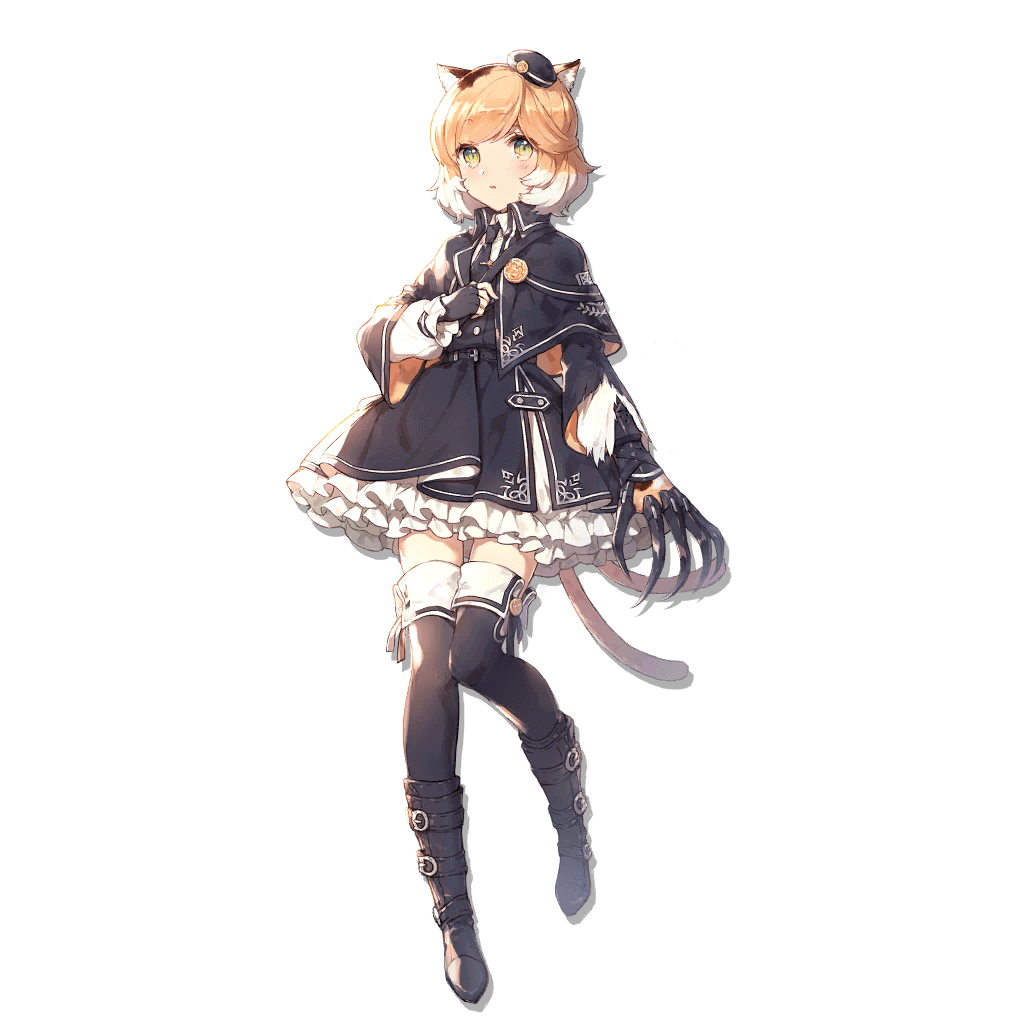 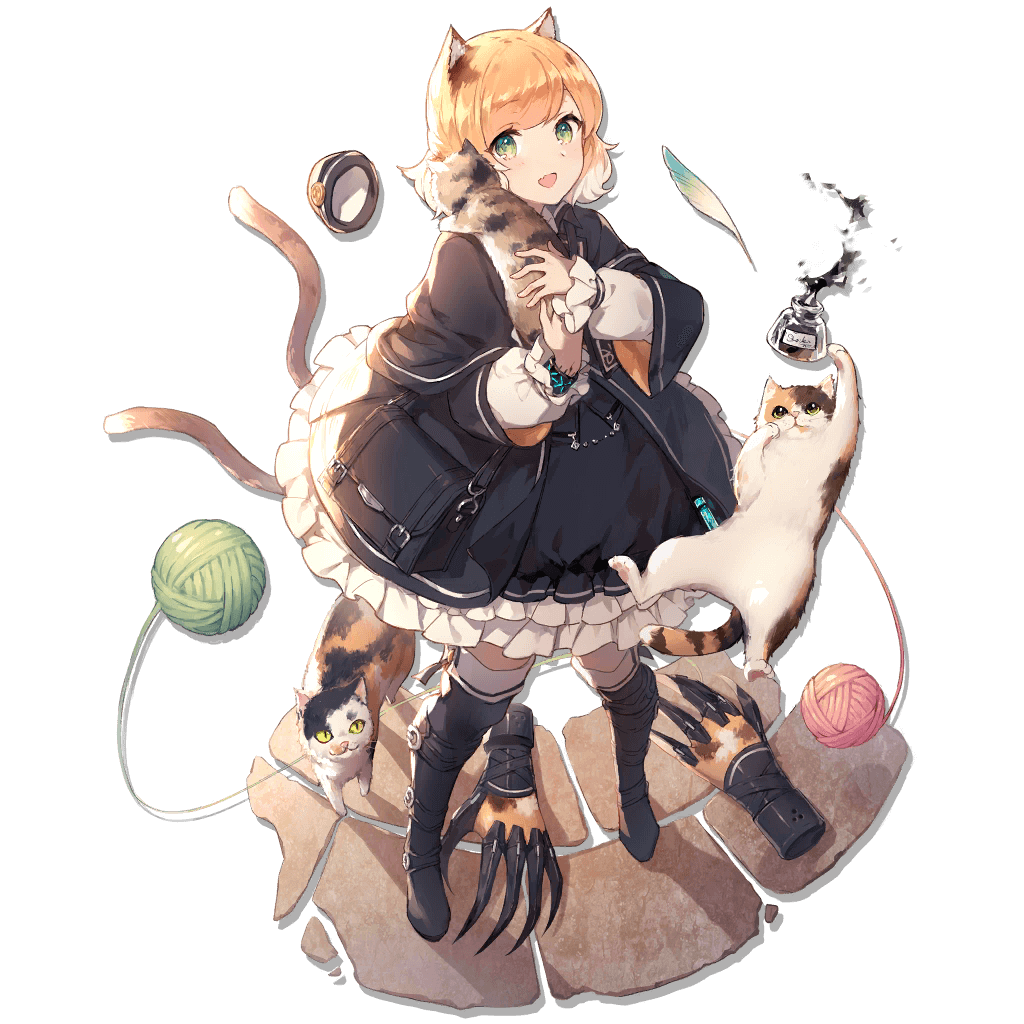 In a word, scratch. 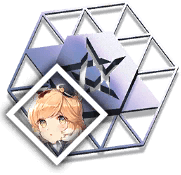 Mousse's Token An album whose cover is decorated with golden floral patterns. The photos inside record the 'kitties' that played with the photographer. Kitties!
Potentials

Has a 10% chance to attack twice in a row when attacking
Info
Combo
Lvl: 1

Has a 20% chance to attack twice in a row when attacking
Info
Combo
Lvl: 1

When this Operator is assigned to a Trading Post, order acquisition efficiency +30%
Baking Lvl: 1

When this Operator is assigned to a Dormitory, restores +0.3 Morale per hour to another Operator assigned to that Dormitory whose Morale is not full (Only the strongest effect of this type takes place); furthermore, self Morale recovered per hour +0.3

“Good day… p-please call me Mousse. And… and please don’t look at my hands...”

The intensely self-conscious Mousse was once an apprentice baker, but when she became Infected, her wealthy family confined her to an isolated garden for her own safety. Now she fights for Rhodes Island as a DPS Guard who deals Arts damage at melee range.

Because she deals Arts damage, Mousse is extremely capable at assassinating high-DEF enemy targets. Her Talent, Combo, buffs up her damage by giving her a chance to attack twice on every strike. Meanwhile, her two Skills both increase her offensive and defensive capabilities. Scratch is an Automatic Skill that buffs Mousse’s next hit and also debuffs the Attack of her victim, while Fury is a Manual Skill that increases Mousse’s Attack and Defense for the duration.

Like other Block-1 Guards, Mousse isn’t able to hold the frontline by herself, despite her Arts damage and good survivability. She is also expensive to deploy, especially for a 4* unit. In fact, she’s even more expensive than some higher-rarity 5* and 6* Guards, which can be a problem on maps with DP limitations. Despite this, Mousse is still an excellent Guard with a useful niche, especially when you need Arts damage in a battle where Casters are disadvantaged for one reason or another.

Her debuff brings extra utility, although it's rather weak compared to others available. Her damage output is lower than the higher rarity alternatives.


At first glance, Mousse is a subpar unit but she has a surprising niche. Her S1 at M3 is the only skill in the game that can apply a persistent attack down, which lets her 1v1 (with some healing) some pretty dangerous enemies. That's not usually worth the investment value these days though, but it's at least something worth noting.

Mousse was an apprentice baker in Londinium, Victoria when she became infected with Oripathy. Her parents sent her to Rhodes Island for treatment.
At her request, Mousse was recruited as an Operator following psychological counseling and a battery of tests. Now a regular logistics staff member, she provides combat support.

[Cell-Originium Assimilation] 15%
Operator Mousse displays ore lesions and other side effects indicative of Oripathy on her right arm.

[Blood Originium-Crystal Density] 0.4u/L
The Operator has been infected for a long time, with considerable effects on her overall health.

Increase Trust to 50.
Operator Mousse was born to a large, affluent family in Londinium, Victoria. Big families with many siblings are common in the bloodline. Her older brothers and sisters had already found their way into the leadership of major corporations, military forces, or Arts research, while Mousse never showed any promise in Originium manipulation or finance, the family's traditional trade. Despite that, her parents didn't love her any less and supported her the best they could. Though frankly, the family didn't have very high hopes for her.
In Victorian society, carousing wealthy socialites are the norm, but that just wasn't Mousse.

Increase Trust to 100.
Before the Originium panic hit Victoria, the tension in Londinium was already high. Mousse went to work for a bakery called 'Valerie,' specializing in baking cakes, bread, and afternoon tea snacks.
Mousse could not recall how she got infected, only that when her hands started mutating, her family quickly hid her in an isolated garden. This lonely, painful time was when she met the creatures she came to call 'kitties.' The 'kitties' weren't infected and were her only friends.
A half-year later, her family contacted Rhodes Island and a few Operators came to the garden for a thorough exam on Mousse. Once the family agreed to pay the appropriate fees for RI Pharmaceuticals to take her in, she was moved to the island for treatment.

Increase Trust to 150.
As for the creatures Operator Mousse dubbed 'kitties,' we have confirmed that they do not pose... imminent danger to Rhodes Island.
All speculation regarding these animals has proved to be groundless. They really are ordinary creatures. When Mousse is not around to supervise them, they roam the island, climb up to high places and look down on things below. They seem to leave footprints in the corridor, deliberately announcing their presence with their elegant paws. They have fur and parts matching those of a normal animal, with biological functions to match, as Operators who come across their droppings could attest--and a problem eventually solved with dedicated effort from Mousse, Jessica, Provence and several others.
Mousse has apologized for the trouble... with a sad expression reminiscent of her pets. Given her sincere apology and her promise to train the 'kitties,' such transgressions have been expunged from her official record.