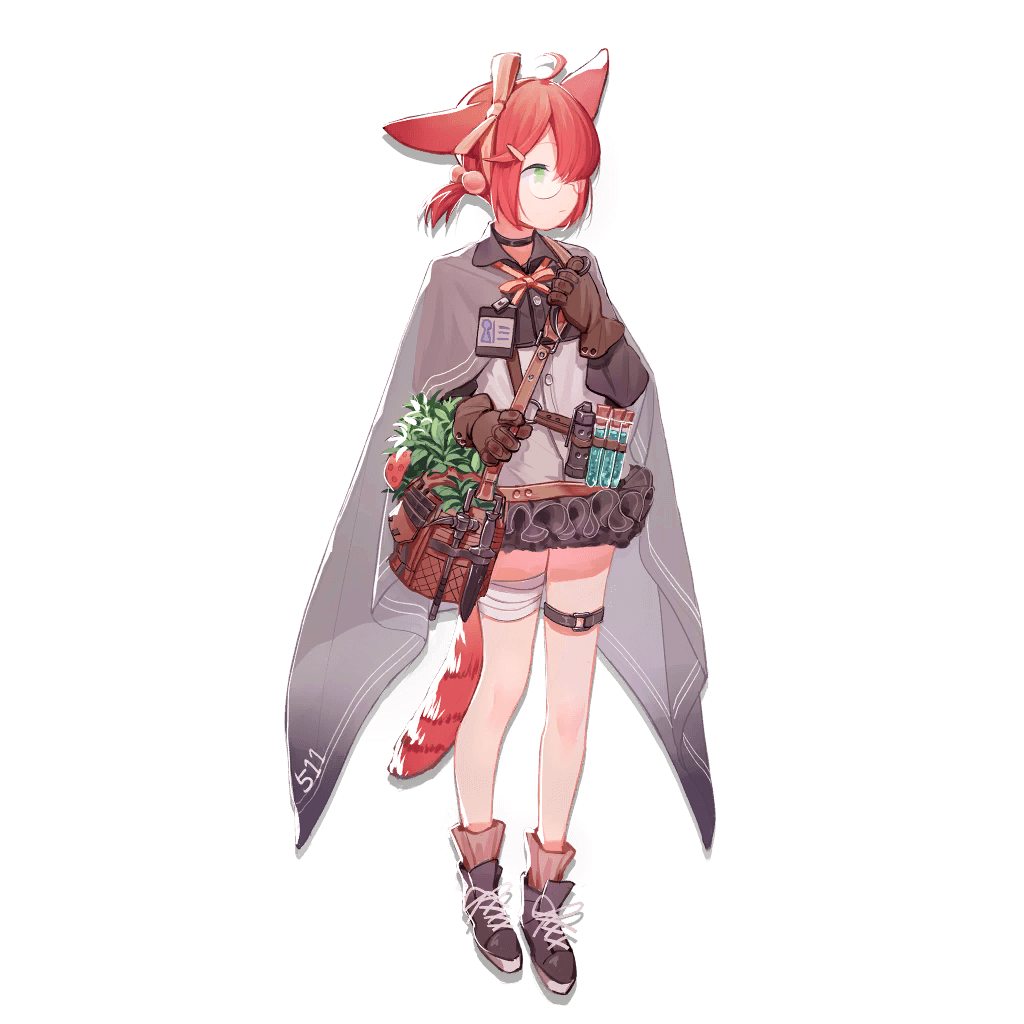 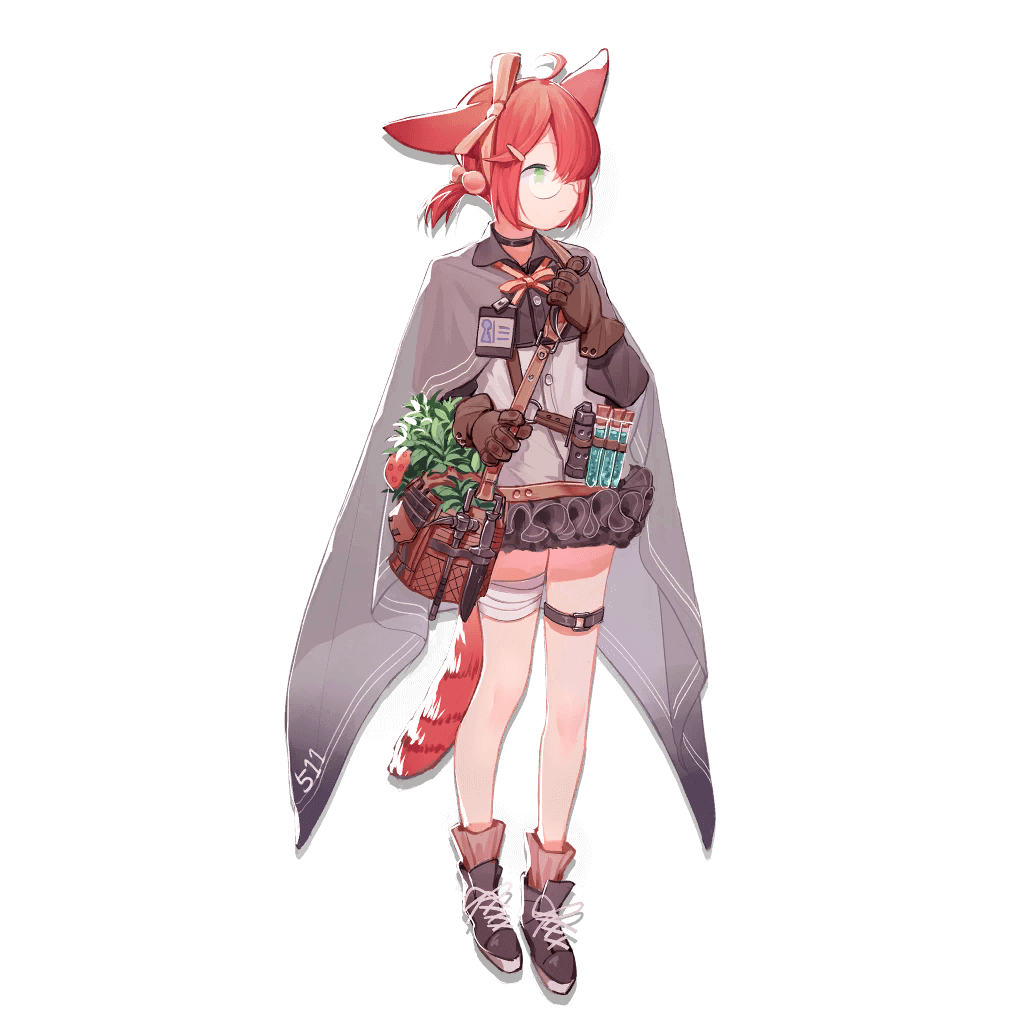 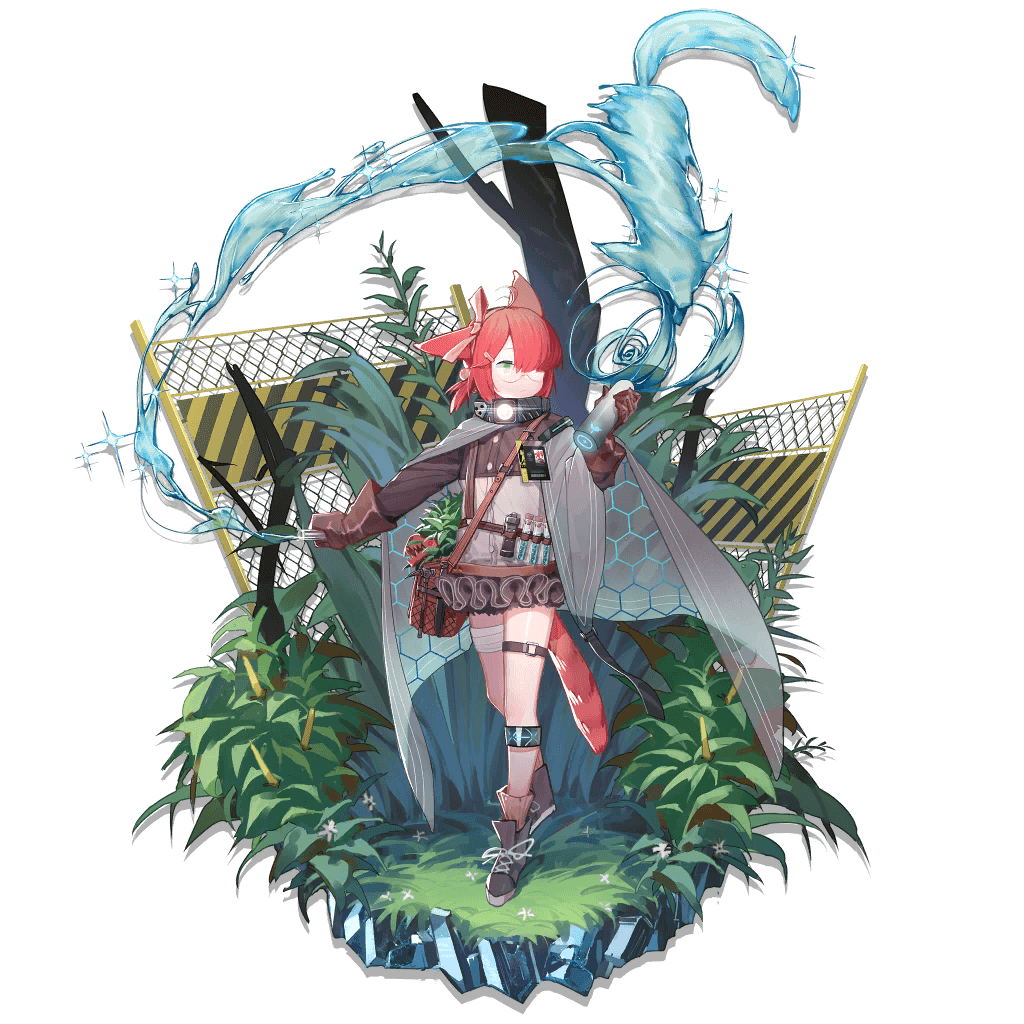 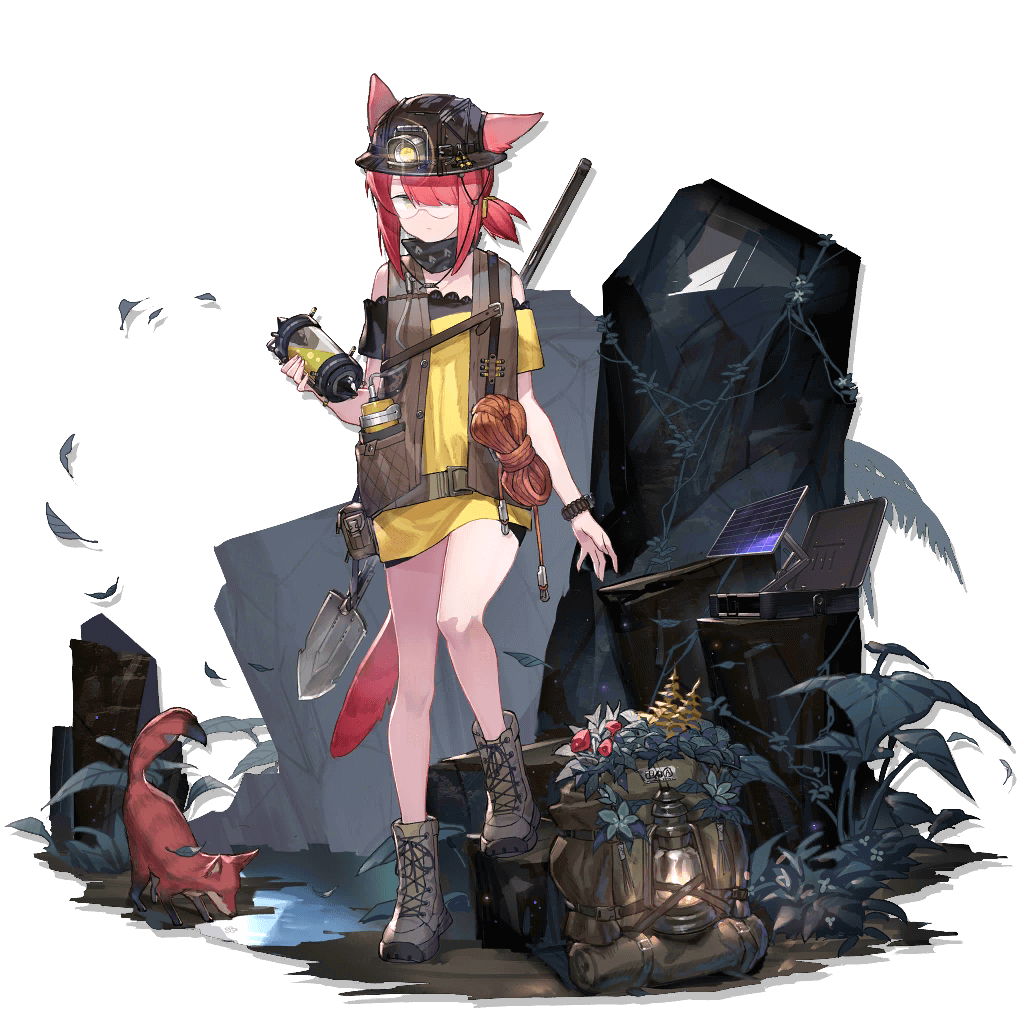 Myrrh, Medic Operator of Rhodes Island, will provide medical care for the squad with her herbs.

She might be sweet, but her herbs are sure bitter. 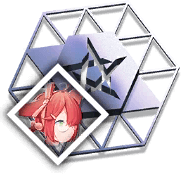 Myrrh's Token A pill made from multiple herbs. It will come in handy when you fall ill. Besides, every pill is carefully coated.
Potentials

Immediately restores the HP of all allies by 100% of Myrrh's ATK after deployment
Info
First Aid Kit
Lvl: 1

Immediately restores the HP of all allies by 110% (+10%) of Myrrh's ATK after deployment
Info
First Aid Kit
Lvl: 1

Immediately restores the HP of all allies by 150% of Myrrh's ATK after deployment
Info
First Aid Kit
Lvl: 1

“生命的短暂” Lv. 2
Immediately restores the HP of all allies by 170% of Myrrh's ATK after deployment
Info
First Aid Kit
40

“生命的短暂” Lv. 3
Immediately restores the HP of all allies by 180% of Myrrh's ATK after deployment
Info
First Aid Kit
40

Level 3
Equip Trait
When healing targets with less than 50% HP, the healing is increased by 15%
Equip Attribute Bonuses
Unlock Information

“生命的短暂” Lv. 2
Immediately restores the HP of all allies by 170% of Myrrh's ATK after deployment
Info
First Aid Kit
40

“生命的短暂” Lv. 2
Immediately restores the HP of all allies by 180%（+10%） of Myrrh's ATK after deployment
Unlock Information

“生命的短暂” Lv. 3
Immediately restores the HP of all allies by 180% of Myrrh's ATK after deployment
Info
First Aid Kit
40

“生命的短暂” Lv. 3
Immediately restores the HP of all allies by 190%（+10%） of Myrrh's ATK after deployment
Unlock Information

When this Operator is assigned to the Workshop to process elite material, the production rate of byproduct increases by 75%
Thoughtfulness Lvl: 1

When this Operator is assigned to a Dormitory, restores +0.55 Morale per hour to another Operator assigned to that Dormitory whose Morale is not full (Only the strongest effect of this type takes place)

+ Talent: Heals all Operators on deploy
+ S1 and S2: Can heal an additional target
+ A decent mix of single target and multi-target healing

“Ms. Perfumer suggested that I add some spices into my herbs and now they taste much better! I'm so glad I managed to summon the courage to ask her for advice...”

Despite her mysterious background, Myrrh has displayed great skill with pharmaceuticals and a willingness to learn about new technologies during her time in Rhodes Island. Her abilities have led her to become a single-target Medic whose Skills enable limited multi-target healing.

Myrrh’s two Skills look similar on the surface: both increase her healing strength and allow her to heal an extra target. However, her automatic Dual Healing Skill is more efficient over time, applying its effects regularly to her next heal. Medic Field is better suited to burst healing, being a manual Skill that grants its benefits for a certain duration. Even Myrrh’s Talent, First Aid Kit, is a multi-target heal, causing Myrrh to heal all allies on the field when she is deployed. This can be used as a panic survival button or a strategic support tool, saving her squad from a tight situation.

Myrrh should not be considered a replacement for an AOE Medic, especially considering the long cooldown of her Skills. Instead, Myrrh is more of a “hybrid Medic,” combining the strength of single-target healing with the convenience of multi-target coverage. When a situation calls for her abilities, she is sure to spice up the battle.

A better version of Ansel, due to having multi-target healing that doesn't rely on RNG.

Myrrh is not the best low rarity medic, so there isn't a lot of meta reason to use her beyond the early stages of your career, let alone go the extra distance for Masteries. Stick with Sussuro and Perfumer instead, with the cheaper Ansel as backup. If you do want to invest in her Masteries, stick with her S2, which is more impactful despite its longer SP cycle. Her S1 is an alright skill, and has a breakpoint at M1, but lacks value after that.

Increase Trust to 50.
Although an ordinary medic, Operator Myrrh takes this responsibility very seriously. She goes work early and comes home late every day, giving her all to provide other Operators with quality medicine. Myrrh has unique insights into the pharmaceutical sciences, and is always keen to seek out new ingredients in nature. But she struggles with interpersonal communication. Terminally awkward with all but her closest friends, Myrrh demonstrates an inability to maintain strong and lasting relationships.

Increase Trust to 100.
After officially becoming a member of Rhodes Island, Operator Myrrh exhibited her precious positivity. Compared to other Senior Operators, Myrrh was much less savvy when it came to familiarity with job protocols or combat. But she worked her way through that toughest time, especially with her friend Harmonia still recuperating, which only further steeled her resolve to make it on the island.
Myrrh did integrate much faster than other new recruits in some areas. She grasped the island's complicated structural layout and access system without much effort, almost never getting lost. She also made valid suggestions for obtaining unique resources in certain remote regions. All that had the island quickly taking notice of her.

Increase Trust to 150.
Operator Myrrh's herbal mix was deemed a great medicine, but it has all the drawbacks of a premodern pharmaceutical: Uniquely indigenous ingredients, complicated creation processes, extremely bitter taste, and even elements of witchcraft as part of the recipe. The modern medical community saw it as a relic doomed to obsolescence.
But at Myrrh's insistence, Dr. Kal'tsit developed a special training course with modern technology specifically for her. The training has produced positive results.
Myrrh quickly mastered a simplified pharmaceutical process and applied it to her work. While the result remains bitter, the remedies she offered have garnered positive feedback for their effectiveness.
With assistance from the convalescent home personnel, Operator Myrrh is now striving to overcome that final drawback of her medicine.

Increase Trust to 200.
As for her own and her friend Harmonia's background, Myrrh has never given a straight answer. She spoke of 'ruins' and 'secret worlds,' perhaps to throw others off the trail, or it could be that she had no understanding of them at all. What is known is the pair came from a region lacking the protection of a sovereign state, relying on strict rules of secrecy to prevent its location or status from becoming known to outsiders. That has stifled investigation into the subject.
According to Myrrh's own account, her friend Harmonia got Infected during an exploratory mission on which Myrrh made a mistake. But Myrrh has not provided any details about the adventure or the cause of Harmonia's infection. During interviews, it became clear that Myrrh has suffered memory loss due to trauma and is unable to reconstruct the event.
Note: No information regarding Harmonia's symptoms and prognosis are available through the archive. The patient is currently undergoing treatment as an ordinary Infected, but has declined all consultations and inquiries.

Stage Name: mem_myrrh_1
Unlock: E2, Level 1
Description:
She brings not just bitter-yet-effective medicine, but care and concern for every operator on the battlefield, praying for their safe return.