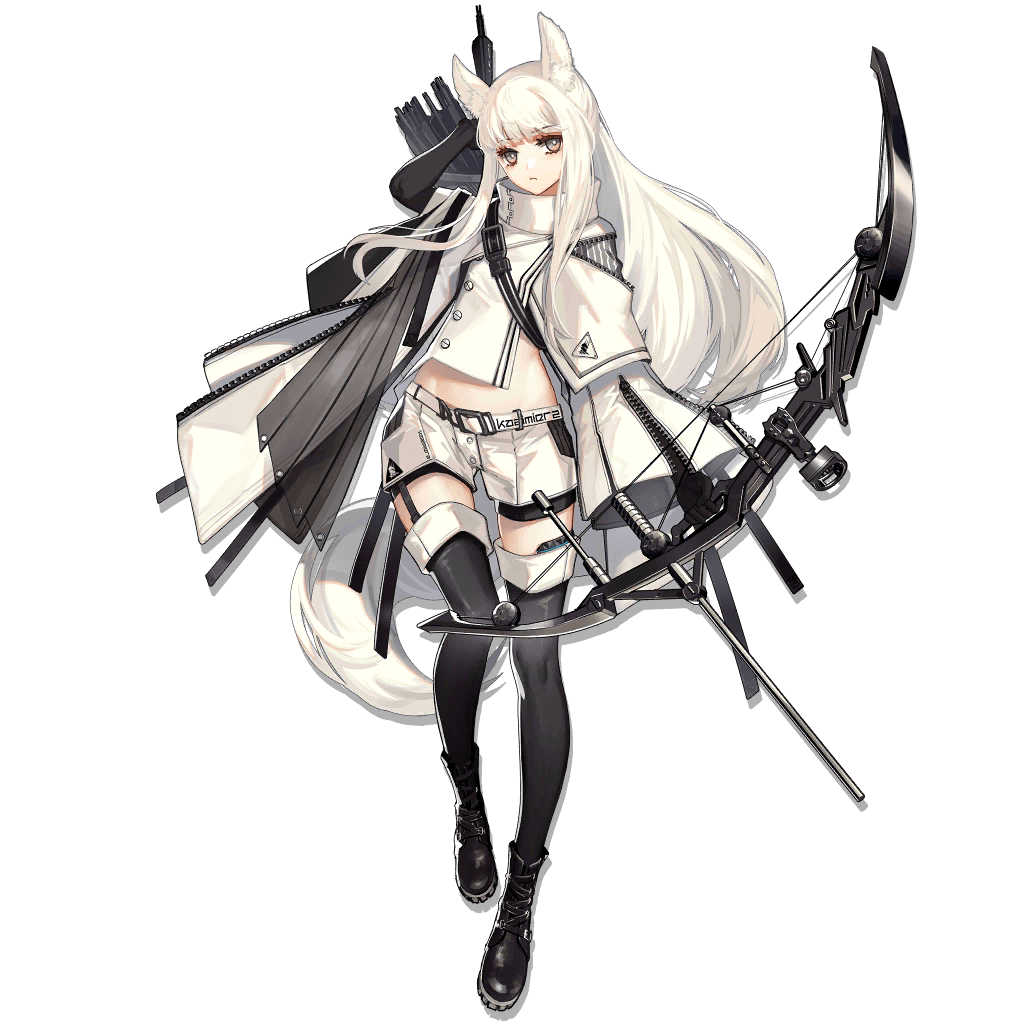 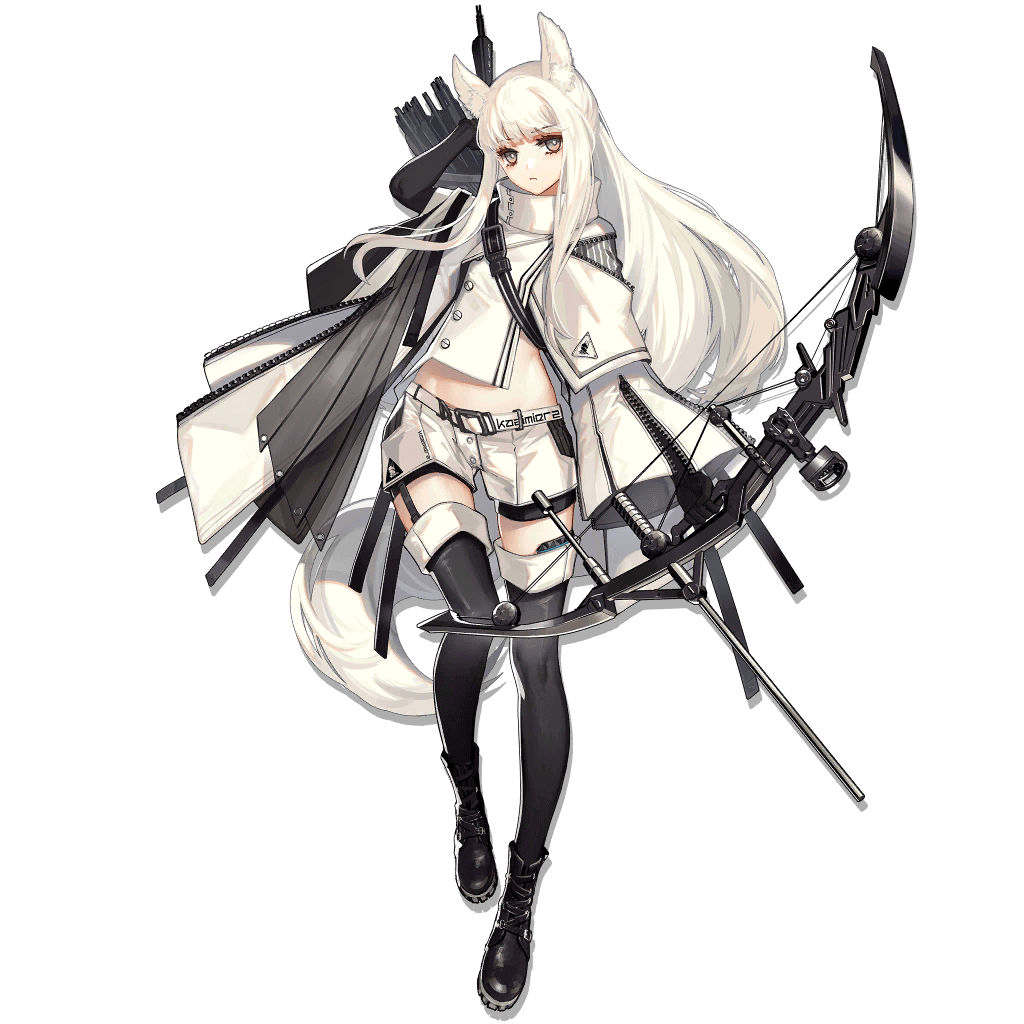 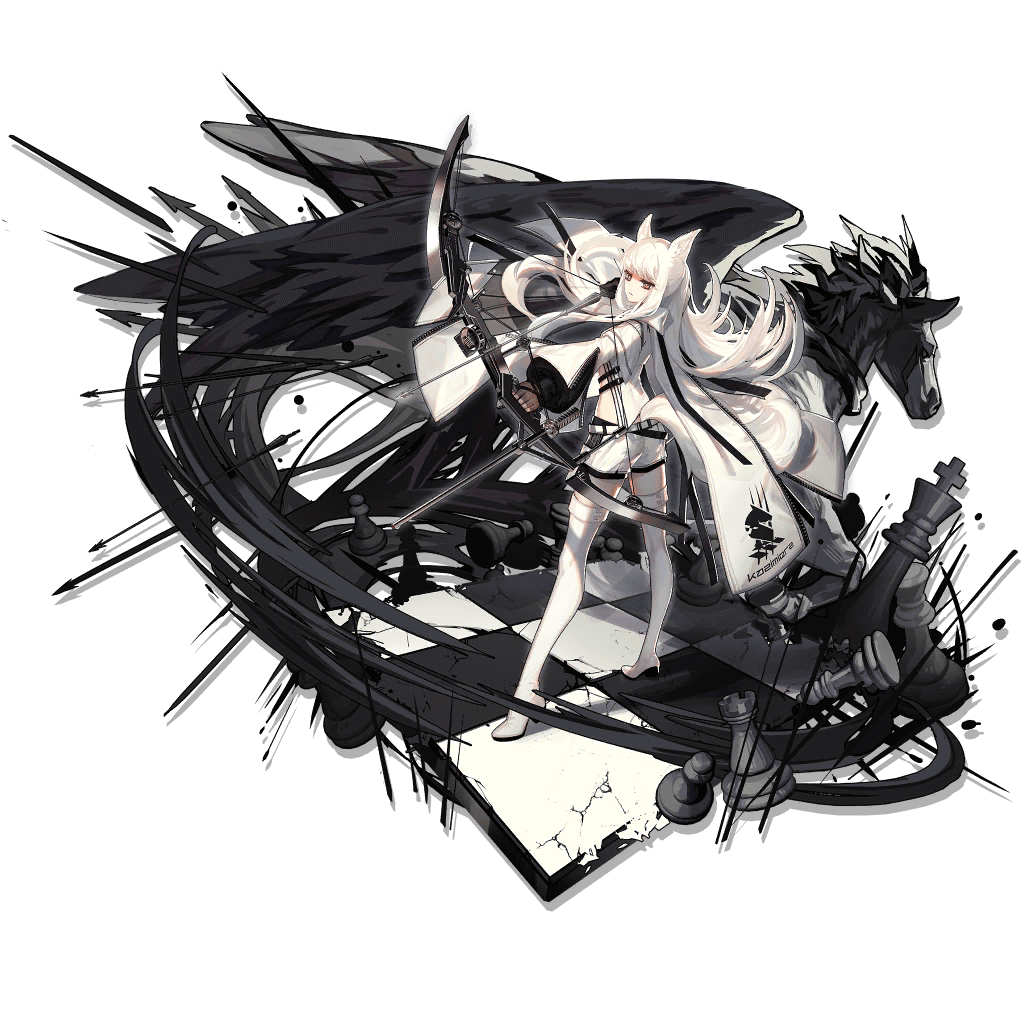 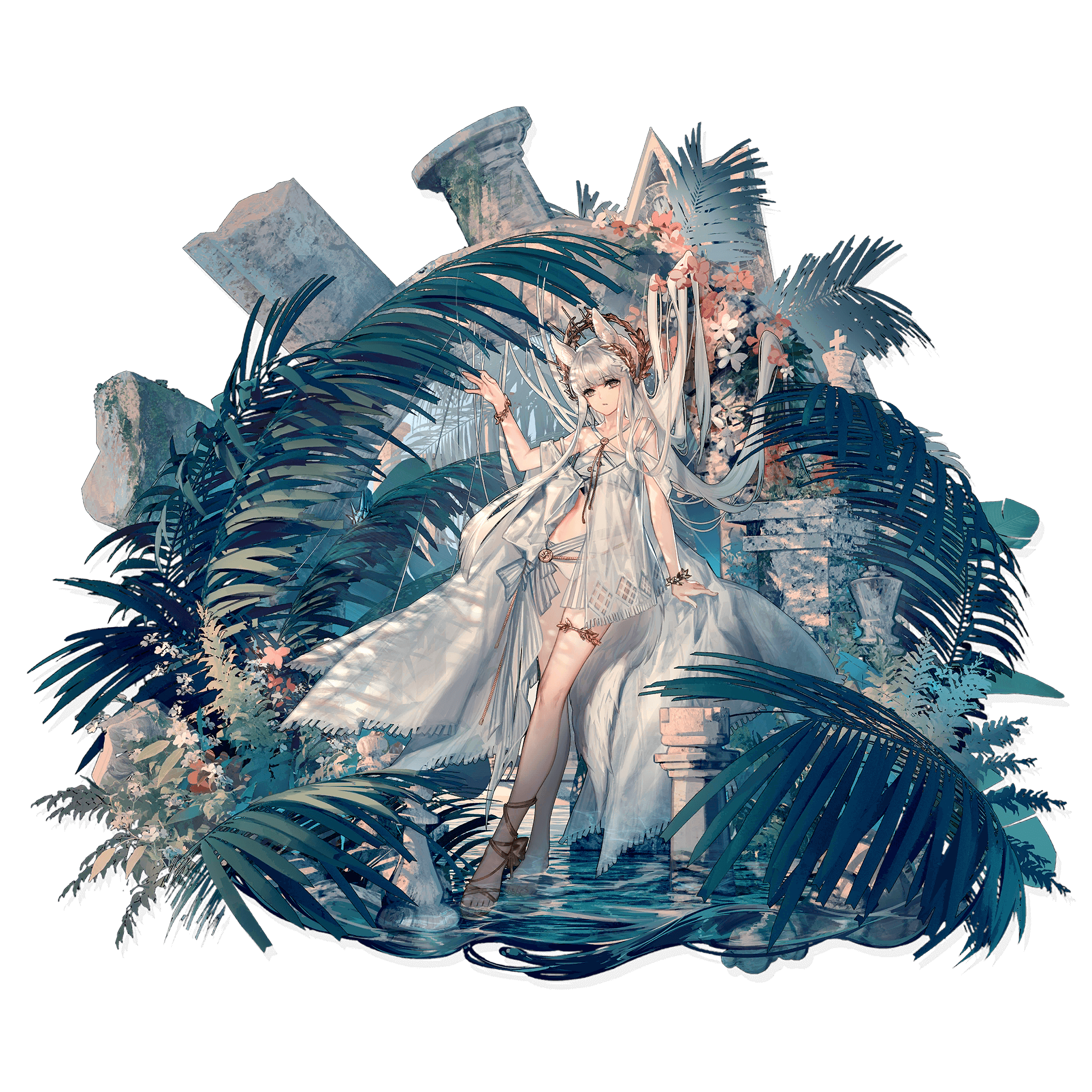 A carefree girl, and the nightmare of all knights. 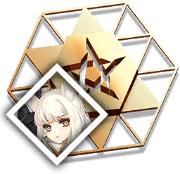 The longer the interval from the last attack is, the higher the ATK of the next attack will be (The longest interval is 2.5 seconds and the corresponding ATK increases to 140%)
Info
All-Out Attack
Lvl: 1

The longer the interval from the last attack is, the higher the ATK of the next attack will be (The longest interval is 2.5 seconds and the corresponding ATK increases to 150% (+10%) )
Info
All-Out Attack
Lvl: 1

The longer the interval from the last attack is, the higher the ATK of the next attack will be (The longest interval is 2.5 seconds and the corresponding ATK increases to 180%)
Info
All-Out Attack
Lvl: 1

The longer the interval from the last attack is, the higher the ATK of the next attack will be (The longest interval is 2.5 seconds and the corresponding ATK increases to 190% (+10%) )
Info

When this Operator is assigned to be the Trainer in the Training Room, Sniper Operators' Specialization training speed +30%
Sniper Expert β Lvl: 1

When this Operator is assigned to be the Trainer in the Training Room, Sniper Operators' Specialization training speed +50%

+ Trait: Prioritize attacking air units
+ Once her S2 is activated she does great damage versus everything but the highest DEF enemies
+ Increased range with S2 allows her to attack targets other standard Snipers can't
+ Talent: Large ATK buff as time between attacks increases (up to 2.5s)

- Long activation time on S2, during which she is significantly weaker than other Snipers

“Checkmate. I'm sorry, but victory is mine.”

Is Platinum a former Knight-Assassin of Kazimierz, a mercenary who has turned over a new leaf, or just a troublemaker who makes death threats to keep her chest size secret? Regardless of what she may have been before, now that she is part of Rhodes Island, Platinum is a 5★ Anti-Air Sniper.  Her role is pretty simple and straightforward: Kill everything in sight (but flying things first).

Platinum’s unique strength lies primarily in her second Skill: Pegasian Sight.  It extends her range 1 tile beyond that of normal ST Snipers and increases her damage at the cost of some attack speed.  This effect is permanent: once it is active, she will be in extended slaughter-mode for the rest of the fight.  If she is in a situation where her Talent, All-out-attack, can take effect (increases damage based on time in between attacks), she can put up some especially impressive damage numbers.

Unfortunately, Pegasian Sight takes quite a while to activate (around a minute), and until it does, she’s at a bit of a disadvantage.  This makes her less useful in rush situations or on maps where she doesn’t have time to set up for the long haul.  That being said, Platinum is a Sniper who can consistently make big hits at a longer range than typical ST Snipers, making her a potent strategic option.


Because of how Platinum's damage scales with her talent, she gains more damage out of masteries then the numbers might imply at first glance. Further, as an infinite duration skill, the damage increase here is very important (especially at M1 and M2), as is the lowered wind up time. Don't be scared off by the wind up time. This is a monster of a skill and is why Platinum is often considered the best 5★ AA sniper to compiement Exusiai.

Arknights: October 24 Maintenance for Both Global and CN: Platinum Voice Change And More!

Platinum was previously an assassin for the Kazimierz Armorless Union. The rest of her background is unknown. She has demonstrated considerable talent and special tactical accomplishments in high-mobility operations, clearance, and urban warfare.
Under the leadership of Dr. Kal'tsit, she is a Sniper Operator for Rhodes Island.

[Blood Crystal Density] 0.11u/L
This Operator has rarely come into contact with Originium.

Physical indicators have all tested at normal levels. After the conclusion of the examination process, I have taken over this Operator's relevant investigation and data files.
- Kal'tsit

Increase Trust to 50.
The only information that has been confirmed about Platinum is her hometown in Kazimierz. All other information that Platinum shares must be taken with a grain of salt, including medical data like chest size and weight. Platinum prefers to falsify this data (often through threats and blackmail) as she believes
'A girl should be allowed to have her secrets!'
Therefore, most of the information in Platinum's file has no value.
Of course, core records and non-public materials are still subject to close scrutiny.

Increase Trust to 100.
The Knight-Assassins are a secret military force cultivated by the various forces of Kazimierz during political struggles with rogue knights.
The story goes that in order to counter the rogue knights who were well versed in combat, the Knight Assassins utilized special assassination and guerrilla combat techniques. Consequently, they launched a relentless campaign of destruction against the rogue knights that refused to cooperate with the reigning government.
Although it is impossible to verify the authenticity of these rumors, Platinum does exhibit some of the skills that could have been used to fight the Kazimierz knights. Both in aspects that can't be measured as well as her measurable if incredible bow skills, under special circumstances, Platinum poses a huge threat to armored targets.
In light of these findings, investigations into Platinum must continue.

Increase Trust to 150.
In the end, Platinum chose to join the team directly led by Dr. Kal'tsit in order to develop her own strengths and to prove that her relationship with Rhodes Island was genuine. This is an acceptable result for Rhodes Island.
Aside from teasing other Operators, shirking her daily chores, and other minor rule violations, Platinum has proven that she has the essence of an outstanding Operator.
Even so, Platinum needs to make sure she applies for 'read permission' from management and not steal glances during the data compilation process.
I hope Dr. Kal'tsit will consider putting an end to some of her more outrageous behaviors. Thank you.

Increase Trust to 200.
[Classified Log]
Even though Platinum currently follows my instructions and orders, she seems to care little for Rhodes Island itself. Even from the perspective of the employment relationship, Rhodes Island's pay may not be able to satisfy her. As such, it is critical we seriously consider whether Platinum will remain loyal.
Of course, according to my personal observations, the relationship between Platinum and Rhodes Island is mostly derived from her trust in the Doctor.
In other words, as long as Platinum's relationship with the Doctor is strong enough, she will continue to hold considerable value for Rhodes Island.
There are multiple ways we can go about removing the variable factors in this situation. Strengthening our relationship to dispel excessive notions of independence ought to be feasible.
- Kal'tsit

Upgrade to Elite LV2.
Currently, all of the intelligence Rhodes Island has regarding the Kazimierz Armorless Union comes from Platinum herself and should not be regarded as the full truth.
At the same time, when conducting secret missions into the large cities of Kazimierz, attention must be paid to the next steps the Armorless Union takes. Rhodes Island should be vigilant of other groups of unknown alignment operating in the shadows.

Stage Name: mem_platnm_1
Unlock: E2, Level 1
Description:
We've invited Platinum to be our tester for an evaluation focusing on the efficiency of drones. She will fire at drones in a safe environment to test their anti-jamming and anti-damage capability. We presume that once a serious Platinum shoots every drone down, it'll serve as a pertinent and effective assessment of this batch of machines.

Post bar users vote. 6-star ranking of day seeking action (updated on March 19, 2022)
The scores on the list are all from players with the contract level of day finding…
Bored Doctor Chronicles #67: Stars Align
Once there was a set of twins (Dioscuri) who ascended to the heavens to become the…
Choosing a Vanguard
Hello all! I am here to ask an opinion about team composition. I know the usual run is…
[solved] Limited banner
hello people, idk if someone else asked this but this is the problem: i dont have…
Alters -> Approve, Disapprove, Cash grab, Brilliant Idea -> Your thoughts
So now there will be a Specter alter - who looks great and all, but they’ve basically…
Read More