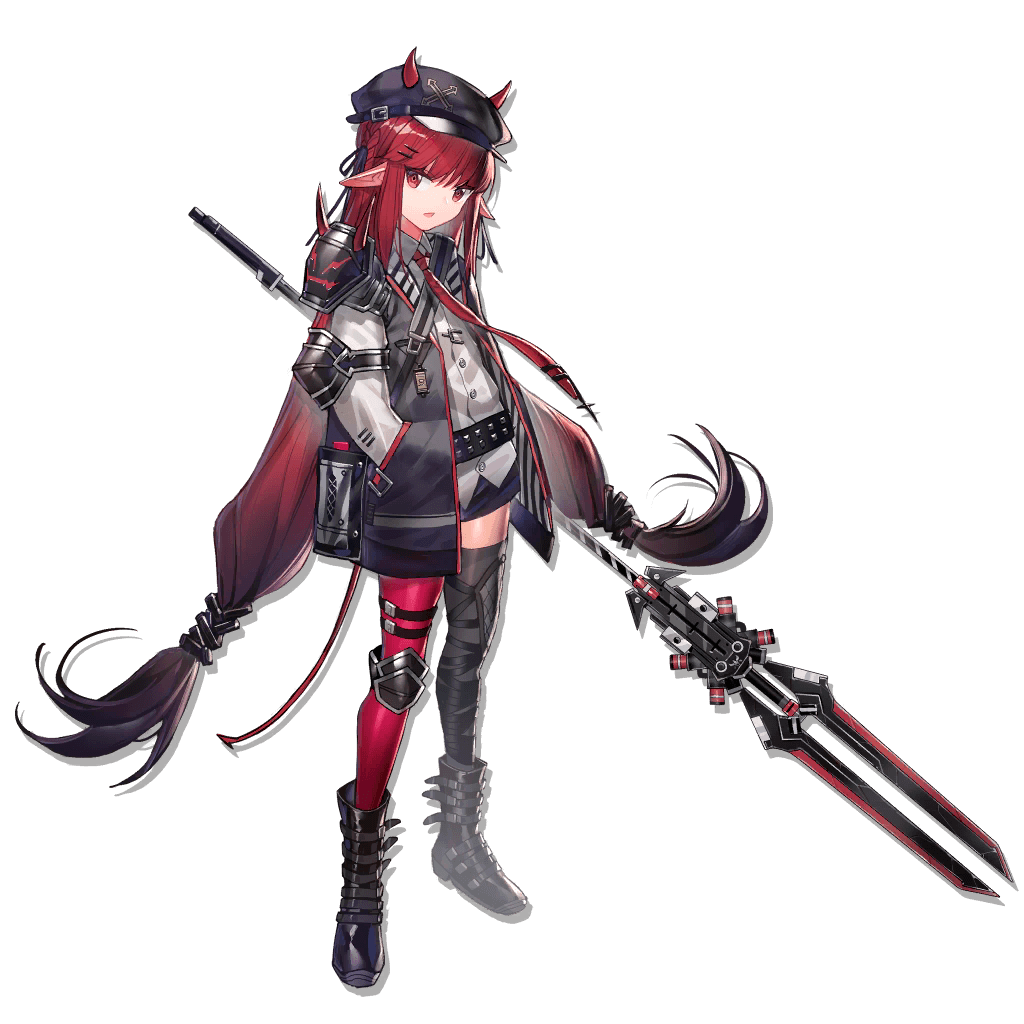 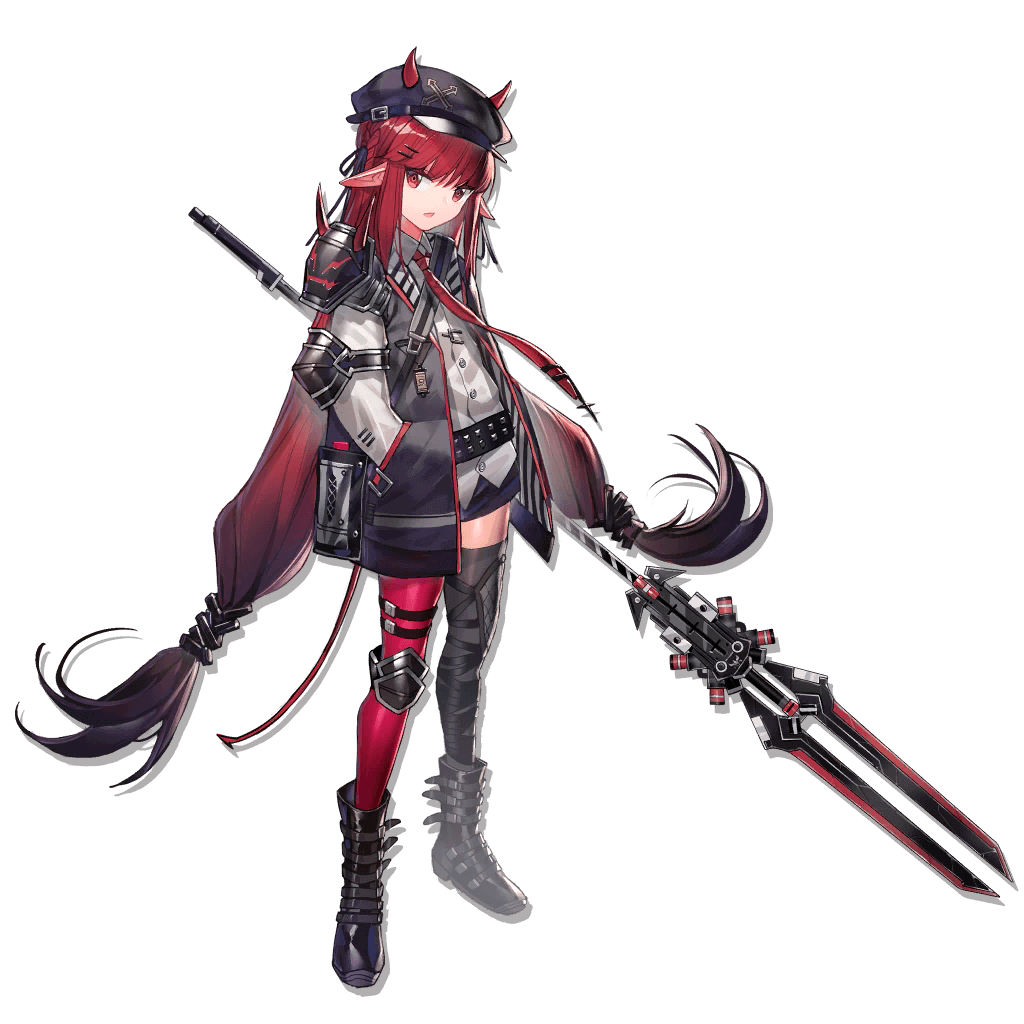 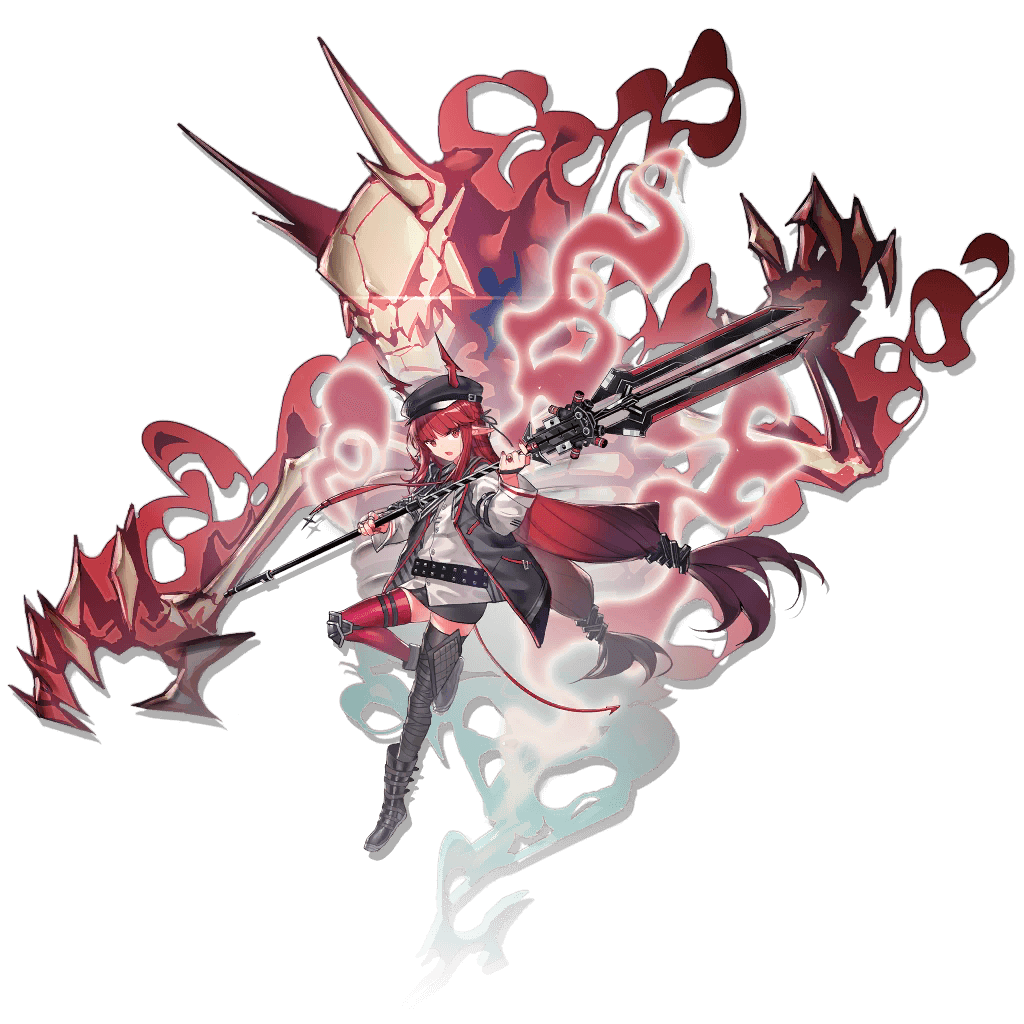 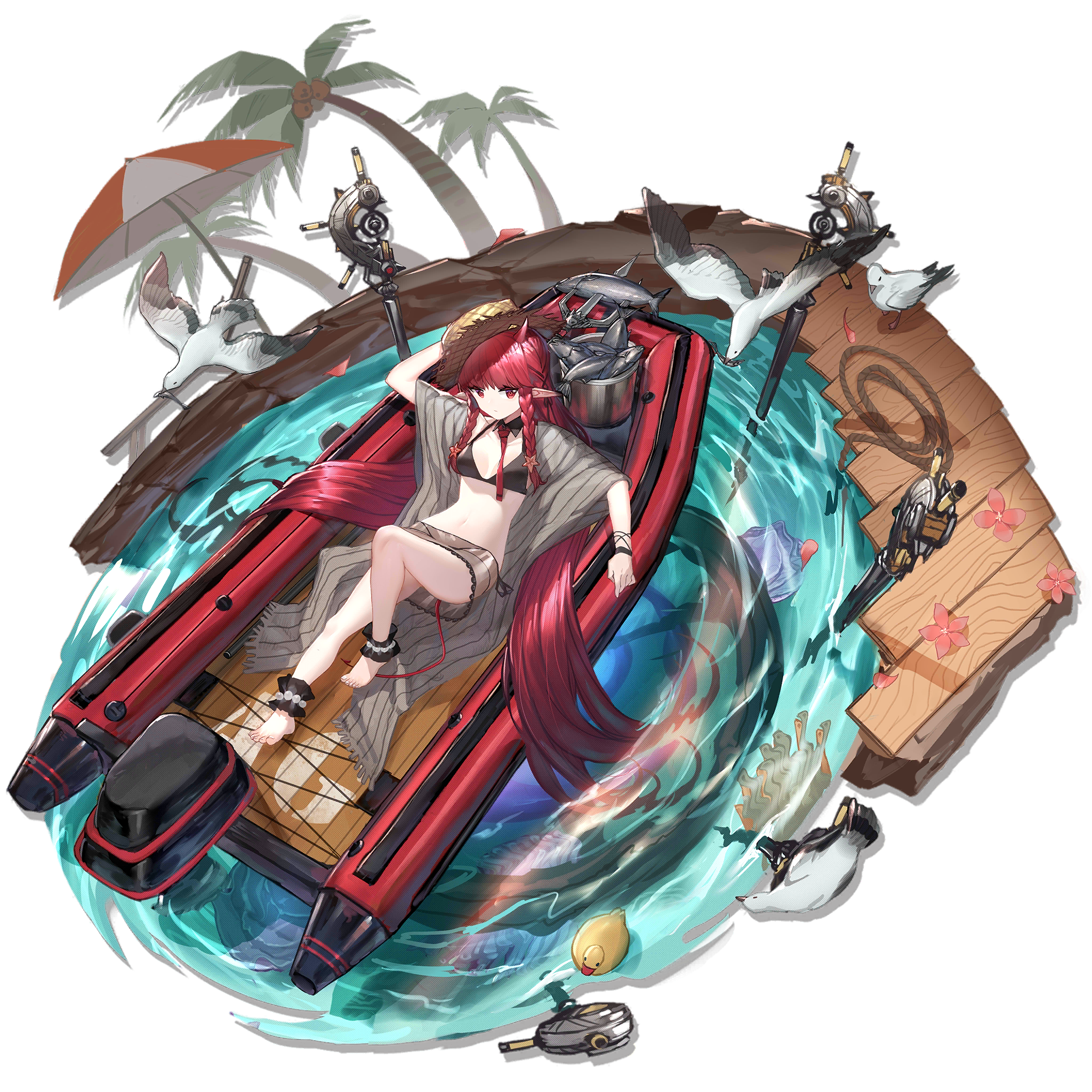 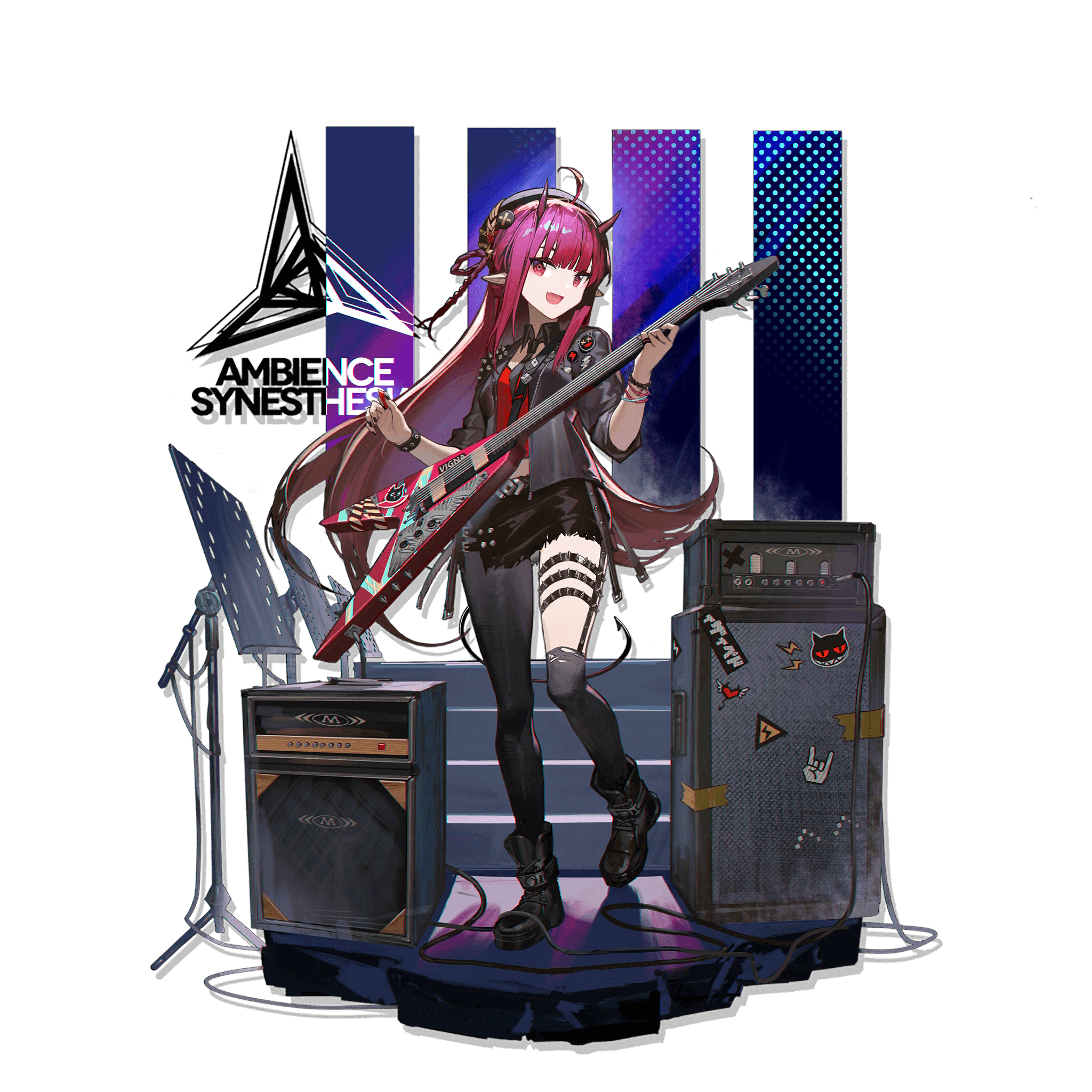 Vigna, Vanguard Operator of Rhodes Island, is ready for combat with the lance in her hands.

Playing rock 'n roll is a battlefield of its own. This is a fact that she knows well. 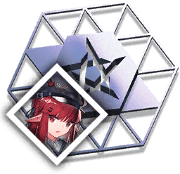 Vigna's Token An electric guitar for daily practice. A request to take it onto the battlefield was denied.
Potentials

When attacking, has a 10% chance to increase the current damage of that attack by 50%. The chance increases to 30% when Vigna's skill is active.
Info
Fierce Stabbing
Lvl: 1

When attacking, has a 10% chance to increase the current damage of that attack by 60% (+10%). The chance increases to 30% when Vigna's skill is active.
Info
Fierce Stabbing
Lvl: 1

When attacking, has a 10% chance to increase the current damage of that attack by 100%. The chance increases to 30% when Vigna's skill is active.
Info
Fierce Stabbing
Lvl: 1

When attacking, has a 10% chance to increase the current damage of that attack by 110% (+10%). The chance increases to 30% when Vigna's skill is active.
Info
Talents from Module Upgrades
Info
40

伟大的摇滚 Lv. 2
When attacking, 15% chance to increase ATK by +100%. Chance is increased to 35% while skill is active
Info
Fierce Stabbing
40

伟大的摇滚 Lv. 3
When attacking, 20% chance to increase ATK by +100%. Chance is increased to 40% while skill is active
Info
Fierce Stabbing
40

伟大的摇滚 Lv. 2
When attacking, 15% chance to increase ATK by +100%. Chance is increased to 35% while skill is active
Info
Fierce Stabbing
40

伟大的摇滚 Lv. 3
When attacking, 20% chance to increase ATK by +100%. Chance is increased to 40% while skill is active
Info
Fierce Stabbing
40

When this Operator is assigned to be the Trainer in the Training Room, Vanguard Operators' Specialization training speed +50%

“No matter how tough the bad guys are, I won't stop thrashing. Not like, a music thing. It's a battle thing.”

Vigna is an unruly little devil that loves to shred the guitar almost as much as your enemies (and to give you a hard time while doing it). She is a Kill-DP-Recovery Vanguard, meaning she obtains 1 DP on every kill and has full DP refund on retreat.

Vigna was built to kill, as she has one of the highest Attack stats of any Vanguard.  Her Talents and Skills just add flames to the fire, as her Skill 1, Attack Up 𝝱, and her Skill 2, Hammer-On, are both straight-up Attack buffs.  The buff value on Skill 2 is quite large, and the slower attack speed demerit barely phases her.  Her Talent, Fierce Stabbing, adds a chance to crit effect to her normal attacks, giving her even more burst potential.

Vigna’s massive killing power fits perfectly with her role as a Kill-DP-Recovery Vanguard, as killing enemies is necessary to grant DP.  The more enemies she slaughters, the better she does her job, so steady streams of low-to-medium enemies early in a map is perfect for her.  Her power also makes her a great candidate to deliver some chip damage on a Boss or Elite enemy that stops in one spot.

Vigna’s only real weaknesses are simply the weakness of her Archetype in general: Kill-DP-Recovery Vanguards are just not a good choice to block multiple enemies nor generate DP over long periods. Other than being a higher rarity level, there is nothing more that could be asked of Vigna, as she is perfect for her role: deploy, slaughter, retreat.  Use this little devil to jab your enemies and you will more than forgive her jabs at you.

Great damage. Her S2 can penetrate the DEF of some heavily armored enemies.


Vigna has some surprising value and is one of the few low-rarity operators who has enough ATK to punch through heavy enemy DEF. She ends up being more useful, especially after modules, than the 5★ Chargers even before accounting for investment value. Her S2 Masteries are actually pretty valuable, though investment beyond E1 SL7 tends to be overkill.

Explanation:  A decent multiplicative ATK modifier to enemies below 40%.  If you are using Charger Vanguards, you are using them to kill things, whether it be typically easy to kill small fry at the beginning of a battle, or for assassination attempts later.  Since they will typically be finishing off what they are attacking, and since you WANT them to get the killing blow for the DP, the bonus from this Module is welcome and will be likely to take effect, and Vigna already has nice ATK modifiers to make even greater use of it.

Vigna is a Sarkaz that was admitted into Rhodes Island following a battery of screenings, showing good potential in skirmishes, raids, and coordinated combat.
Currently a Vanguard with an advance squad at Rhodes Island, with outstanding performance in both tactical raids and frontline combat.

[Blood Originium-Crystal Density] 0.16u/L
Since Sarkaz are susceptible to Oripathy, it is necessary for Operator Vigna to undergo regular tests and other assessments.
—Silence

Increase Trust to 50.
[Log 1]
'We Sarkaz can bear any burden! Weak words like 'compromise' do not, I repeat, do not exist in our vocabulary!'
—Vigna
The quote above was added to her file at her insistence.
Operator Vigna was born in Kazdel, though she had lived in Columbia with her parents ever since she could remember. The constant moving, uneasy childhood and rough streets of Columbia gave rise to Vigna's unruly side.
As a Sarkaz, Vigna saw a lot of discrimination against people like her, and often got into scuffles standing up against it. Of course, there were Sarkaz sympathizers, but they were few and far between.
Vigna saw clearly the prejudice rooted in misunderstanding and closed-mindedness. It depressed her. But for the sake of her parents and others who still support her, she has not once lowered her little head.

Increase Trust to 100.
'To be alive is to want your voice heard, right? Here, take this electric guitar, we'll use it to... uh, yeah, express ourselves! Use it to express how we feel!'
—Vigna
The quote above was, once again, added to the Operator's file at her insistence.
Rock-and-roll was viewed as pure noise by traditional musicians at its inception. But then an iconic band from Columbia performed in loud, roaring concerts and officially ushered in the revolutionary new era of music.
There is no bias in the world of rock, everyone has the right to express their thoughts and feeling in song.
Operator Vigna saved up enough for a concert ticket. She was electrified all night by the wail of the guitars.

Increase Trust to 150.
'I don't think there's ever an unusable weapon! People who say that just don't know the right way to use it. Anyway, since it's here, might as well use it!'
The above quote explains why Vigna chose the lance as her weapon.
This particular lance model never took off because of its unusual shape and esoteric features making it hard to master. Most of the lances were left to collect dust in the storehouse. Even though Vigna had enough cash for a better weapon, she saw the lance in the corner and right off the bat knew she had to have it.
Wielding the lance requires great strength and skill, so Vigna doubled her daily training regimen. And to improve the power of the lance, she contacted the original manufacturer and custom-ordered a new model in pursuit of the perfect build.
After her modifications, her lance is now a light, keen, durable, and powerful weapon. Vigna herself has also stepped up her own personal combat training in order to improve her mastery over the unique tool.
Vigna has never felt she could or would ever quit. Every practice session, every battle all gave her an important sense of improvement, and she knew she wasn't even close to her limits.

Increase Trust to 200.
Operator Vigna followed every step of Rhodes Island's recruitment protocol, from the submission of her resume, through the in-person interview, evaluation exams, all the way up to ultimately meeting the requirements and winning the approval of the top executives.
As for why she chose Rhodes Island, her answer was simple:
'Life here will be exciting. Very, very exciting, I can feel it!'

Stage Name: mem_vigna_1
Unlock: E2, Level 1
Description:
For Vigna, no matter what she does, passion is a majorly important thing.
This is reflected in combat, where on occasion her attacks will burst with power far beyond normal, just like a rock 'n' roll number hitting its chorus.
In what manner you make use of Vigna's up-and-down style is key to driving her strength against the limiter, and there's plenty of ways.
One of them—get her going faster, amping up her burst frequency.