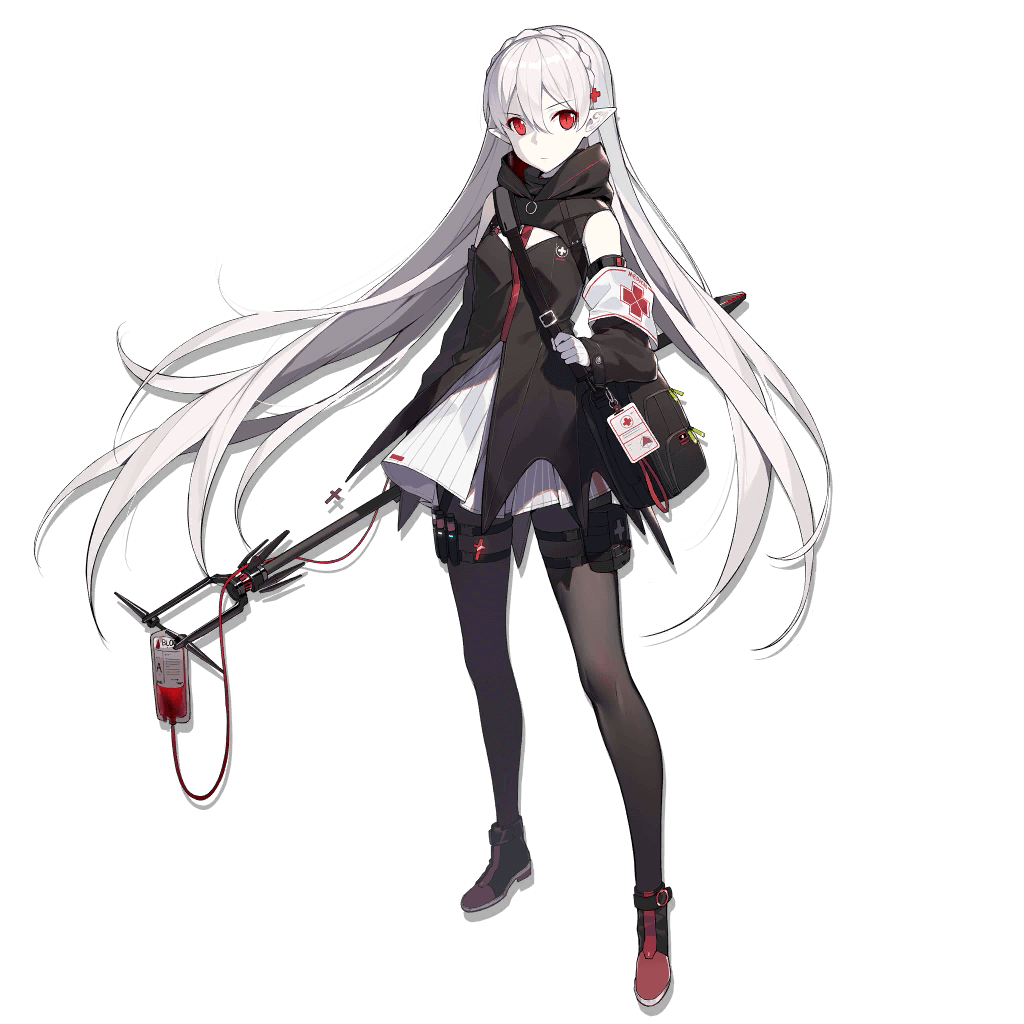 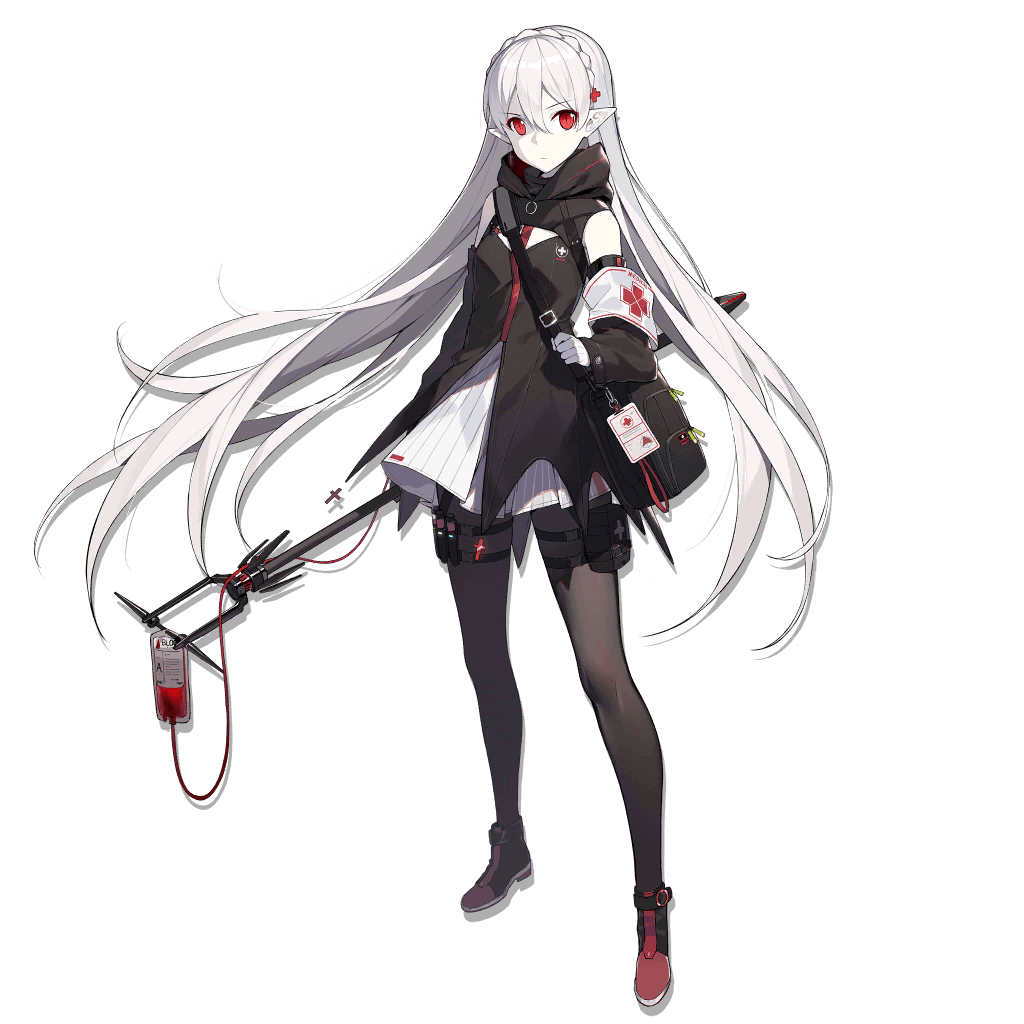 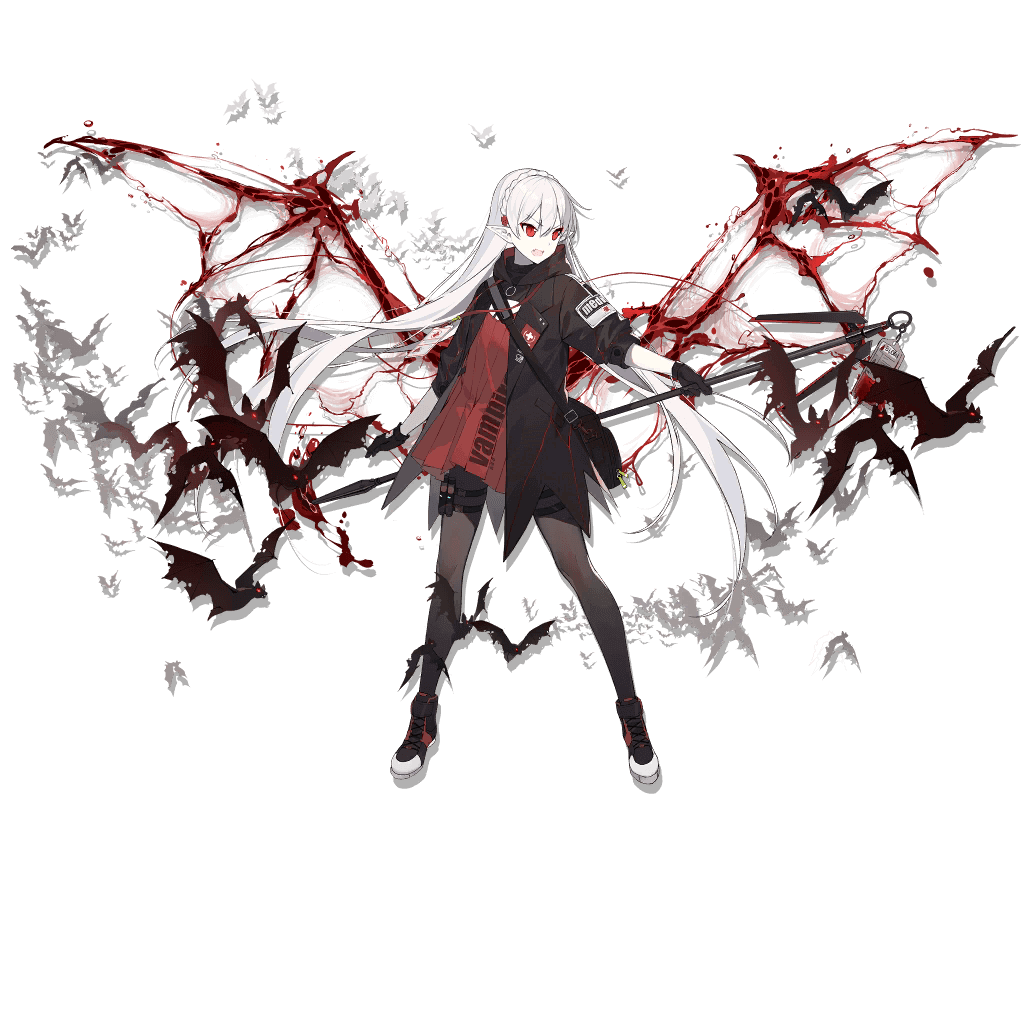 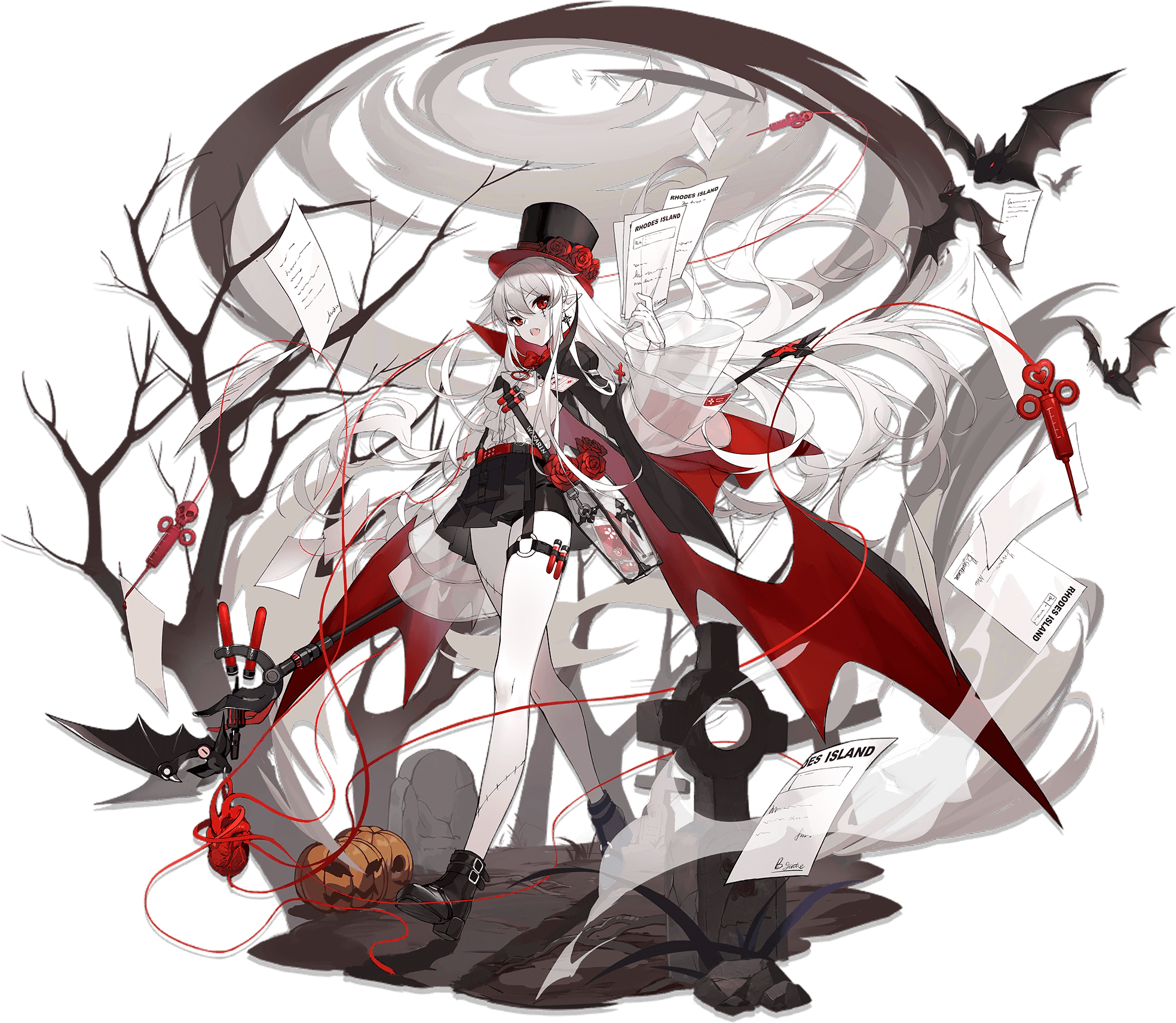 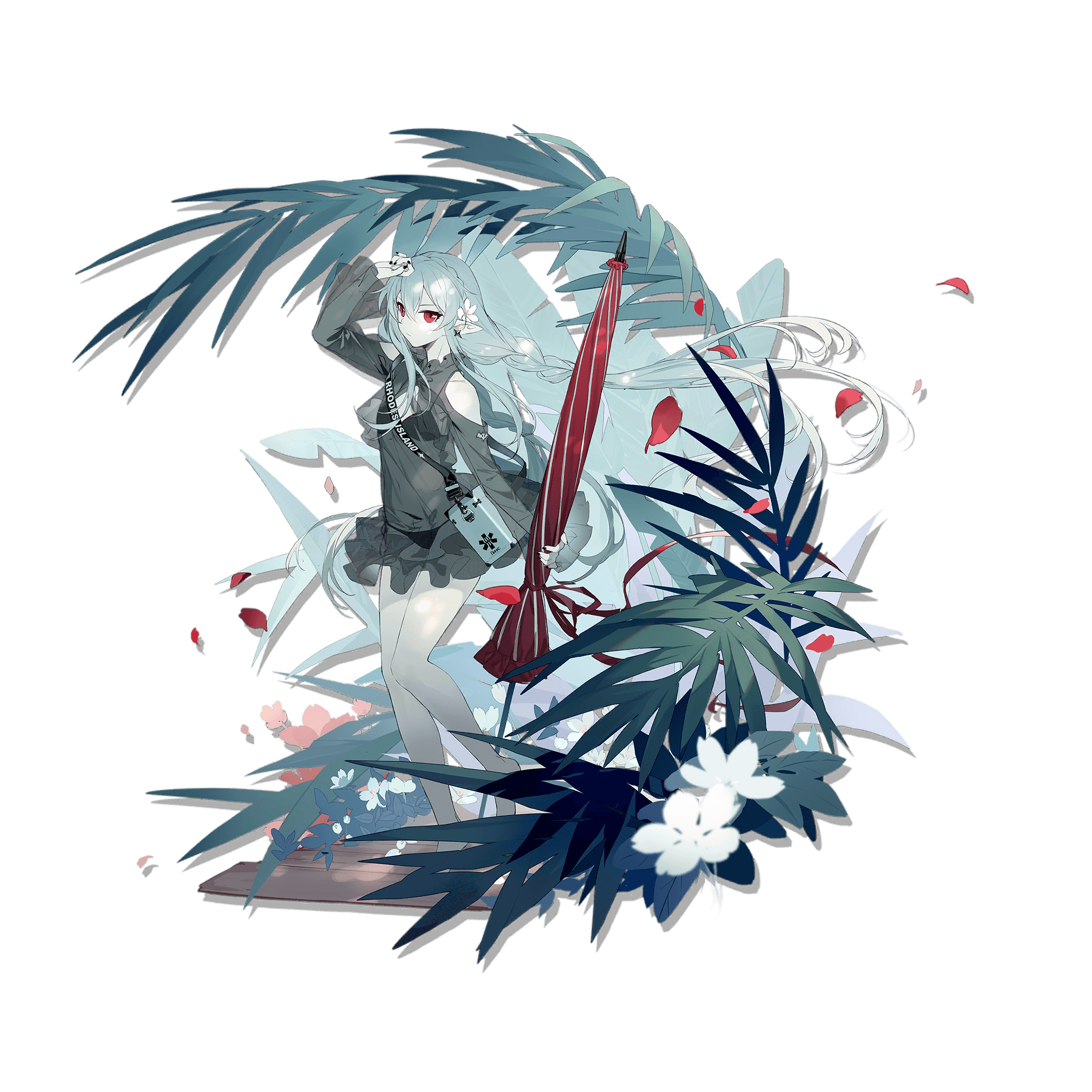 Warfarin, Medic Operator of Rhodes Island, sees the safety of her fellow Operators as her duty. 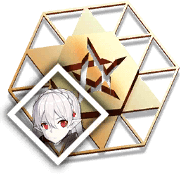 Warfarin's Token A mysterious liquid sealed inside a small transparent bottle. Ropy and shiny, this red matter changes its form slowly as you shake the bottle.
Potentials

Restores 1 Skill Point to this Operator and a random ally within range when an enemy within range is killed
Info
Blood Sample Recycle
Lvl: 1

应急储备 Lv. 2
Restores 2 Skill Points to this Operator and a random ally within range when an enemy within range is killed. If the enemy killed is an Elite or Leader, additional SP restored +1
Info
Blood Sample Recycle
50

应急储备 Lv. 3
Restores 2 Skill Points to this Operator and a random ally within range when an enemy within range is killed. If the enemy killed is an Elite or Leader, additional SP restored +2

应急储备 Lv. 2
Restores 2 Skill Points to this Operator and a random ally within range when an enemy within range is killed. If the enemy killed is an Elite or Leader, additional SP restored +1
Unlock Information

应急储备 Lv. 3
Restores 2 Skill Points to this Operator and a random ally within range when an enemy within range is killed. If the enemy killed is an Elite or Leader, additional SP restored +2
Unlock Information

When this Operator is assigned to be the Trainer in the Training Room, Medic Operators' Specialization training speed +30%
Medic Expert β Lvl: 1

When this Operator is assigned to be the Trainer in the Training Room, Medic Operators' Specialization training speed +50%

“Can I control my feeding urges, you ask? You really underestimate me! I'm a trained professional, you know. Of course I can tell apart patients and food!"

A petite vampire and a senior figure in Rhodes Island leadership, Warfarin is an accomplished doctor and a single-target Medic who specializes in providing Support to her allies.  Her Blood Sample Recycle Talent, despite sounding like a great way to get a communicable disease, restores Skill Points to herself and a random ally within range whenever an enemy is killed nearby.  This can be a powerful support tool, and the range restrictions and randomness can at times be mitigated with smart unit placement. Keep in mind the Talent does not affect cooldowns, nor is it as useful for “timed use” or burst skills with high Initial SP.

Warfarin’s Skills reflect her dual nature as doctor and bloodsucker. Her first Skill, Emergency Triage, increases her next heal by a percentage of the target’s max HP, making her ideal for healing frontline tanks and Defenders. If instead you prefer a sharp-toothed boost to Offensive power, her Unstable Plasma Skill significantly increases her own strength and that of a random ally within range at the cost of both Operators slowly losing HP during the buff’s duration.  This is one of the strongest ATK-support buffs in the game

Even without her Skills, Warfarin has one of the strongest heals of any Medic, and the way she can empower her allies pushes her over the top. However, Warfarin is not always the easiest unit to use because of the randomness of her targeting and the tricky conditions for her buffs. With proper battle strategy based around her needs, however, the fields will run red with the blood of your enemies.

Strong healing for earlygame and a source of SP generation; transitions into an ATK-buffing role for lategame


There's very few medic Masteries worth pursuing, and Warfarin has two of them. Her S1 is the strongest ST pure healing skill in the game, but healing skills are rarely worth mastery and the gains are quite small for most targets (however the extra charge at M3 is quite a nice boost). Focus instead on her S2 buff skill which is one of the most viable buff skills in the game, particularly if you are a more advanced player.

A senior figure in the Rhodes Island leadership, Warfarin's background remains unclear.
She is the founder and administrator of the Rhodes Island Blood Bank, and very accomplished in the medical field. She laid the foundation of the island's medical system with Dr. Kal'tsit.

Increase Trust to 50.
It's hard to imagine that this delicate vampire lady, whose petite figure hardly commands respect, actually has the longest history with Rhodes Island.
She doesn't mind being treated beneath her age and status, but Warfarin absolutely won't tolerate anyone straying from her prescribed course of treatment.
Her age is no secret, but the number she gives has never failed to elicit a gasp.

Increase Trust to 100.
Vampires are feared even among the often demonized Sarkaz race.
They stalk the night, feed on the blood of men, women, and children. They kill, and do who knows what other unspeakably evil things... Such is the legend to which Miss Warfarin is known to matter-of-factly reply, 'That's most of my kin, yes.'
Of course, everyone at Rhodes Island knows Warfarin isn't anything like that.
We know she does indeed love the taste of blood, but this is proof of her remarkable self-control, since she has never taken advantage of any of her patients.
As she says, she can tell the difference between a patient and dinner.

Increase Trust to 150.
The Doctor's importance to Rhodes Island is well understood, but it has a special meaning to Warfarin.
For reasons even Warfarin herself can't explain, she is nigh-fatally attracted to the Doctor's blood. Operators have reported her frequent attempts at, shall we say, rather unladylike behavior towards the Doctor, forcing a restraining order from Dr. Kal'tsit.
Solving this puzzle will perhaps lift some of the cloud of mystery that surrounds the Doctor. But unfortunately, it continues to confound investigation.

Increase Trust to 200.
Although everyone knows Warfarin is a senior executive with incredible medical expertise, very few Operators honestly respect her. The problem goes beyond her physical appearance.
It may have to do with her vampiric heritage, or the fact she is very reclusive. But also, Warfarin has always been light on morals. She does whatever ideas pop into her head without concern for the ethics or even rationality of the idea. Several Operators reportedly experienced sudden, unexplained blackouts in the early days, only to wake up on a surgical table with sinister laughter ringing in their ears.
Warfarin felt she had done nothing wrong, and even Dr. Kal'tsit couldn't convince her, leading to several of Warfarin's more outlandish behaviors being banned by the company.
She has since cleaned up her act, but still occasionally 'scars' an Operator, making it hard for them to trust or respect her.
In the end, she still doesn't think she's done anything wrong.

Upgrade to Elite LV2.
Several authoritative medical books in recent decades were penned by an author under the pseudonym 'Blood.'
The author is a legendary figure in the medical field, known for thorough application of material with unrivaled expertise. Blood's every publication took the medical world by storm.
Alas, no one knows whether Blood is a man or woman, an individual or a group, discussed only as 'Mr. Blood.'
Of course, one only has to look at the comprehensive collection of Blood's work in Warfarin's room to correctly guess that she is the one and only 'Mr. Blood.'
She originally used that name to hide her vampiric identity, but now she thinks it's funny to see her pseudonym on published medical books.

Stage Name: mem_bldsk_1
Unlock: E2, Level 1
Description:
Dr. Warfarin believes that helping our operators quickly wipe out the enemy is a good way to reduce friendly casualties.
Her deep understanding of blood gives her a wealth of special medical skill. Of course, as a battle-hardened veteran, Warfarin feels no need to participate in any simulation exercises. The way she sees it, she's only here to train the young operators so they can better adapt to her 'unusual' brand of combat medicine.