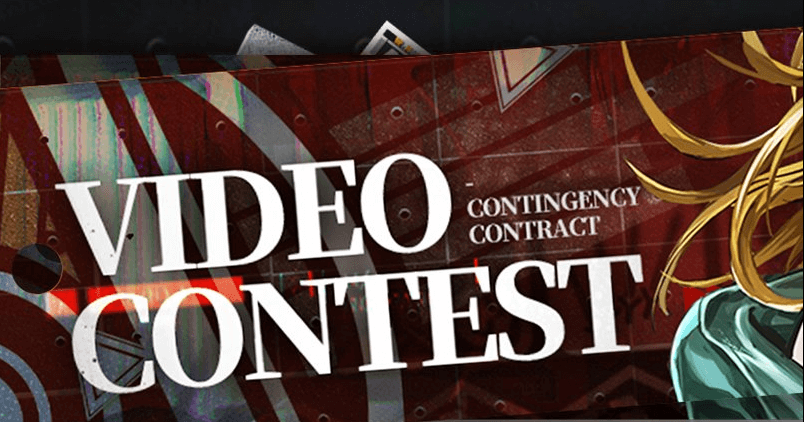 Note from the Editor: This article is an Op-Ed from Salieri AS, a news and content creator for Arknights. Opinions expressed herein are their own, and may not represent the opinions of GP.

Hello Doctors!  I’m Salieri.  Some of you might know me and my love of Arknights from my Facebook page.

Today I’d like to discuss some of the problems with the current Contingency Contract (CC) Video Contest being held by Yostar, specifically how cheaters are manipulating the voting process, and suggestions for a fairer next contest.

First, let's look at the contest itself.  The details for the Contest seem pretty simple: Submit a video to the contest, and the videos that get the most interaction (views + comments + likes) wins these wonderful prizes:

With contests like these, I had hoped that there were measures in place to ensure fairness for all the participants.  Unfortunately, I observed otherwise.

On 19th June, I noticed a sudden surge of view counts for several participants.  They suddenly gained hundreds of views or more in a few hours.  I found this odd because:

While it would be easy to just discount the views (as Yostar would later do), people were gaming the comments and likes as well. 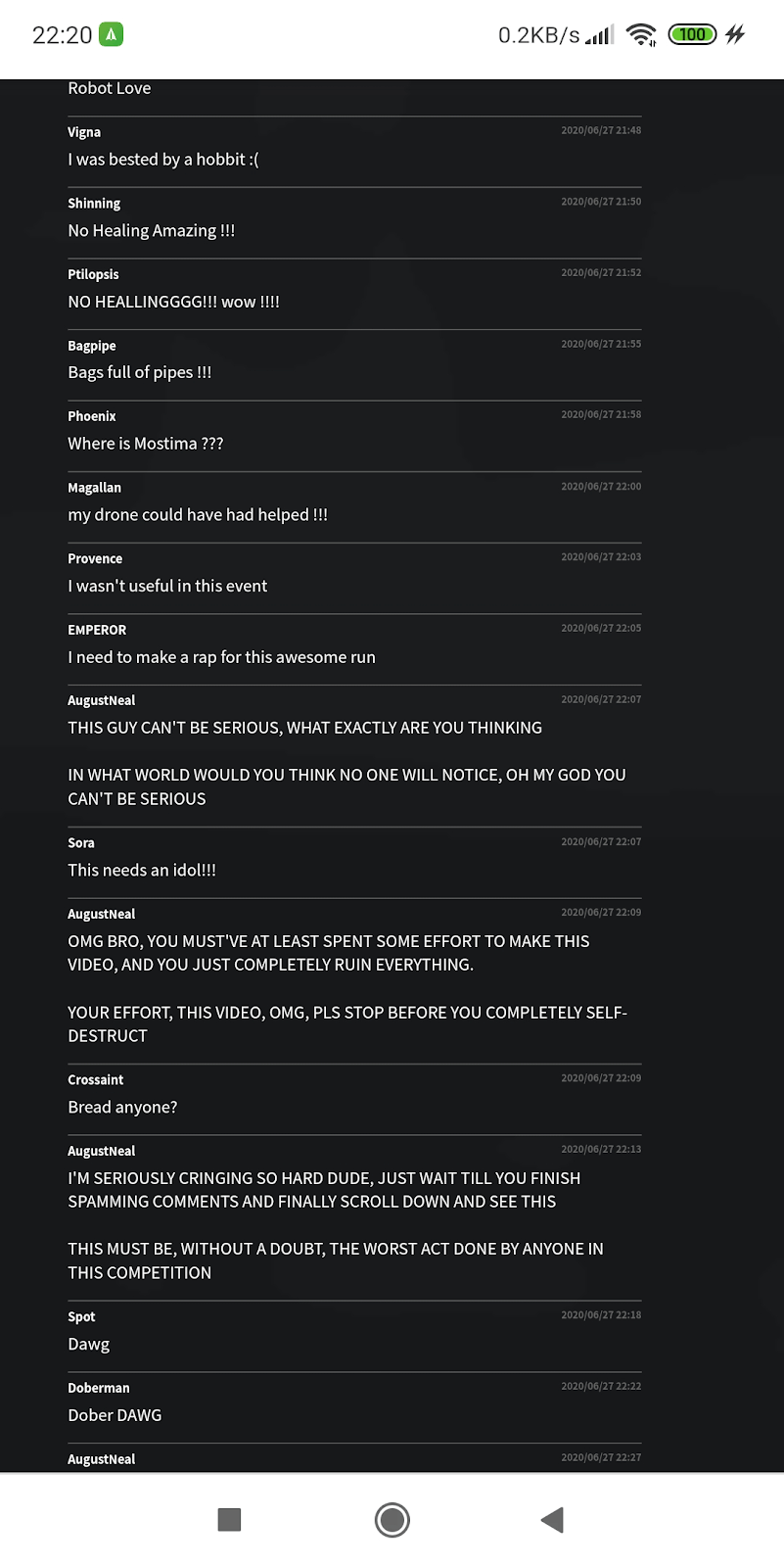 Either this person bribed Operators with LMD, or he made a bunch of fake accounts to comment on the post.  I'm guessing it's the latter (since we all know Jessica is rich).

Despite the good intentions, Yostar's competition had multiple people trying to cheat the results.

Suspecting foul play, I sent an email to [email protected] on 19th June to notify them of my concerns on the event, per the event rules:

Eventually, I managed to contact one of their Customer Service Staff directly through Discord on 20th June, in hopes of getting their awareness as soon as possible.  Fortunately, I got a prompt reply to the evidence I sent them: 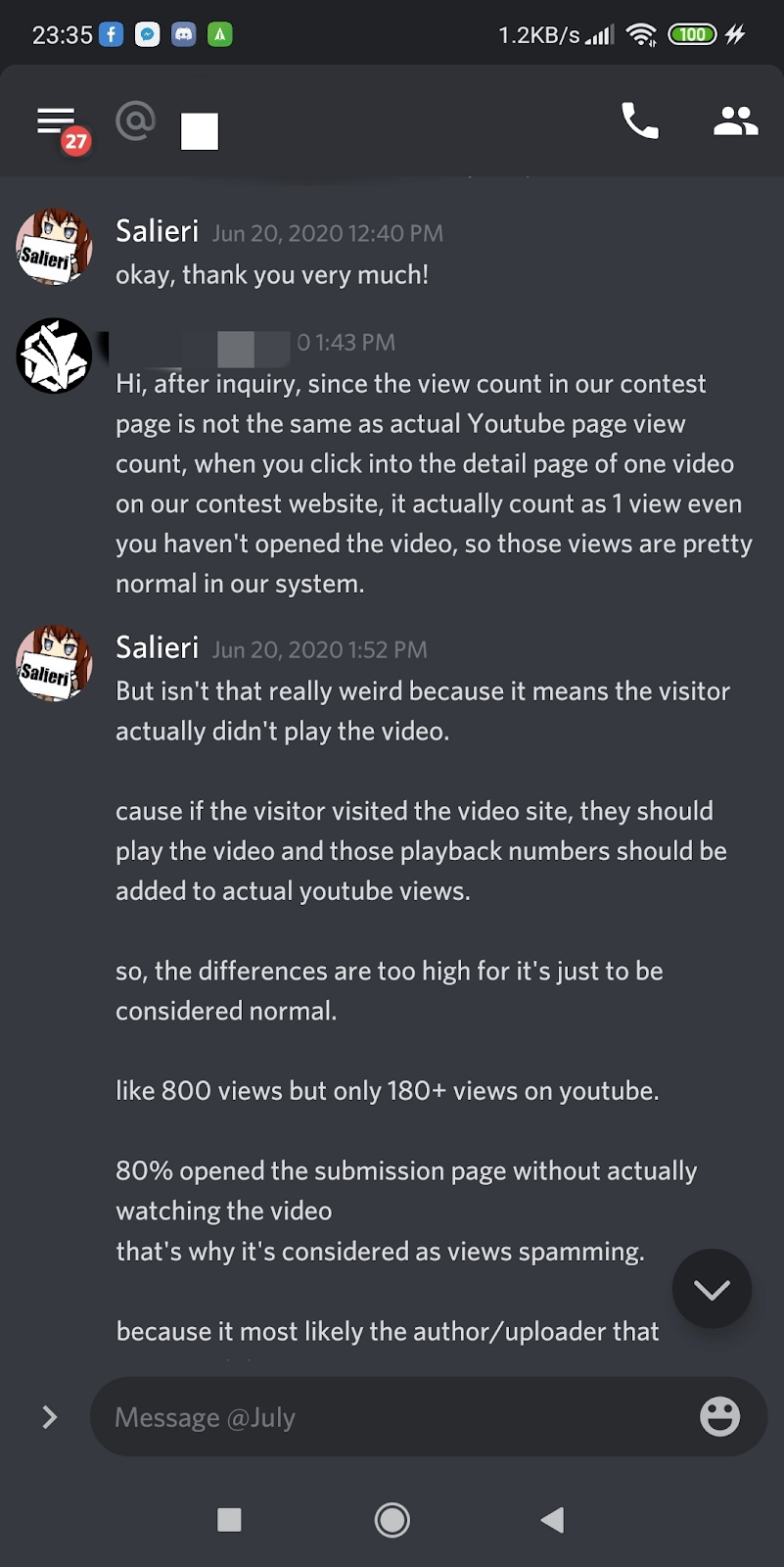 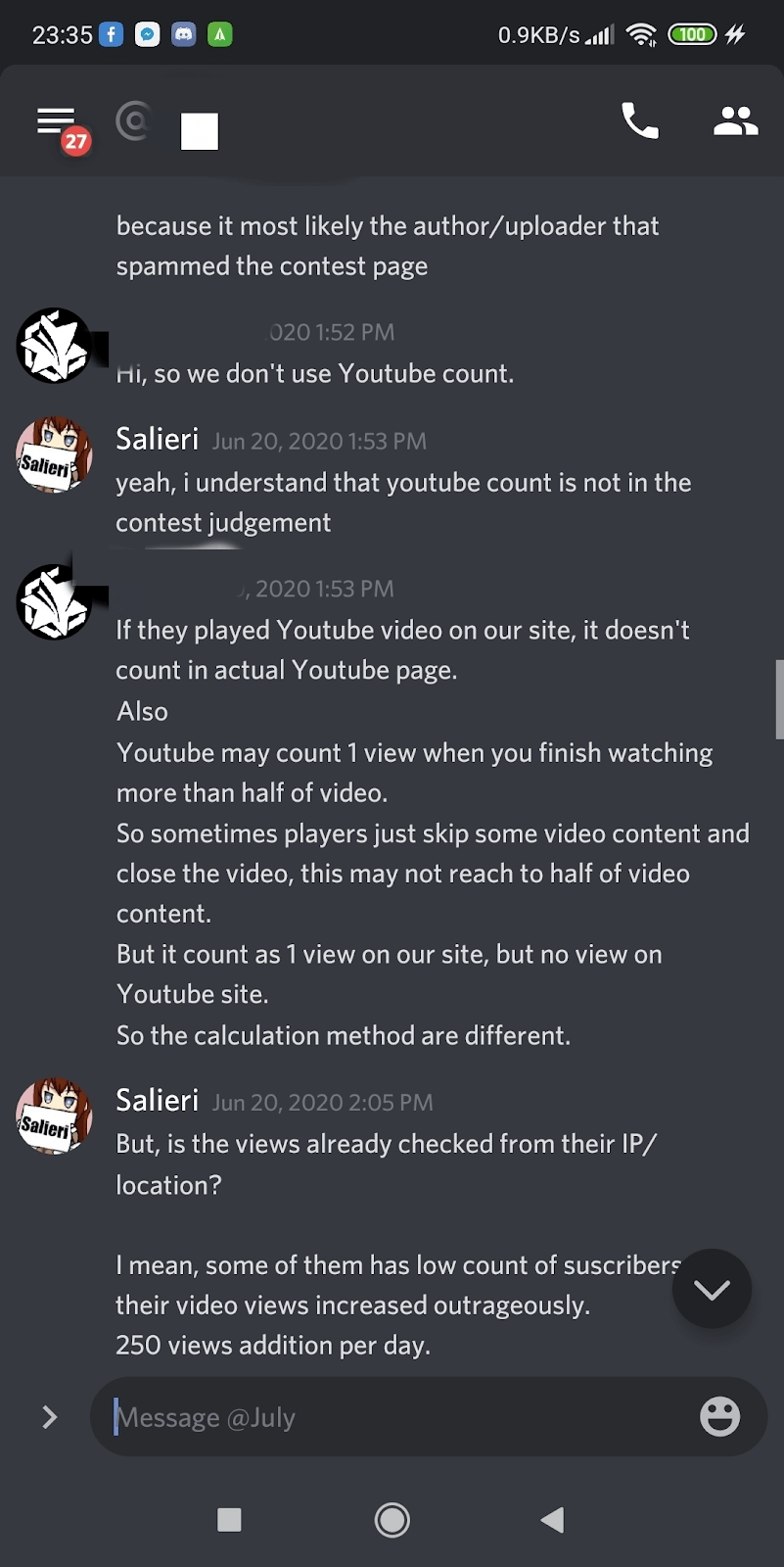 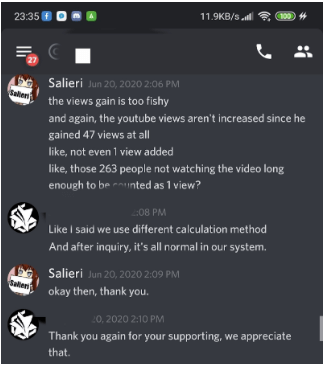 According to the rep, the competition page is separate from the YouTube count and uses its own count system that only tracks page opens.  Additionally, they said the metric systems were "working as intended," while the inquiries on IP tracking/ other anti spam measures went unanswered.  (Editor Note: In the event you do have security systems in place, typically it is a good idea not to reveal what kind it is, since that gives others more information to work with for exploiting it.)

While the system may have been working normally, it seems like there were no measures in place to prevent exploitation and cheating. 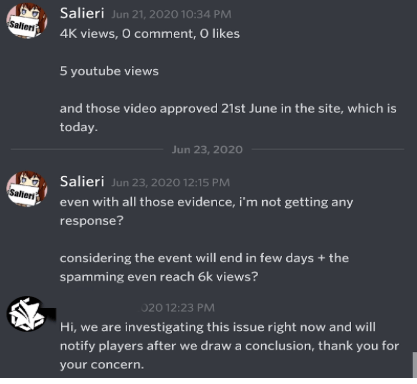 Although I kept in contact until June 23rd, I did not receive any confirmation on my inquiries until this announcement was sent out on June 28th, 8 days after my first report: 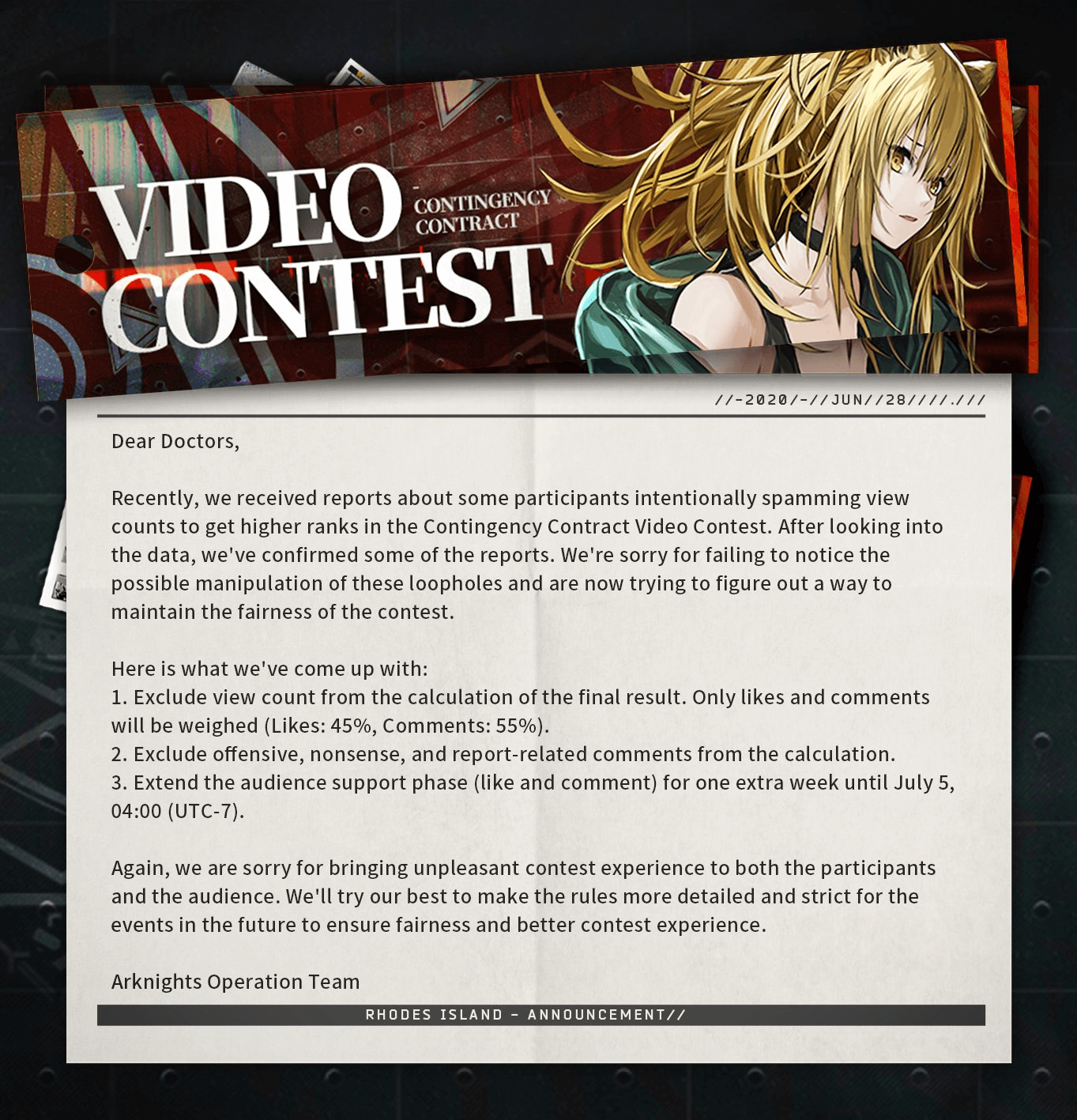 To summarize, views have been removed from the equation completely; the end result is now weighed on likes and comments, slightly favoring the latter.  Additionally, comments will now be filtered for quality, and they will be extending the audience support phase.

Will these measures solve the problem, though?  It seems unlikely.  As noted earlier, there are people who are willing to create fake comments--they can just create more believable fake comments since what constitutes a “quality comment” is subjective.  But then what if Yostar bans all comments?  Likes?  Where do we go from here?

The bottom line is that more thought and concern needs to be put into making these contests fair and preventing cheating.  This is a real issue and players and participants care, even if the rewards do not have extremely high monetary value.  A contest marred by cheating creates the exact opposite of what an event like this should do: bring the community closer together and provide a positive experience for players.

What are some things that we could do to avoid some of these problems?

I would be lying if I said I’m not a bit disappointed.  Preventing cheaters should have been something that was thought about when designing the event.  Then, even though issues were reported long before the problems became severe, the participants were ignored.  Isn’t the players and participants who the event is for?

At the very least, I hope this observation will cause the next official event to go better.  That planning and foresight will be used to prevent cheating and benefit every Arknights player who still wants to be involved in community events and have a fair contest.

If you’ve made it this far, thank you very much for your time.  I hope this can shed some light on what happened, why some players are so upset, and how we can learn something from it to improve moving forward.

Note From the Editor: We reached out to Yostar for a comment or response to include along with this article, but they have not yet supplied one.  We will update if they do.