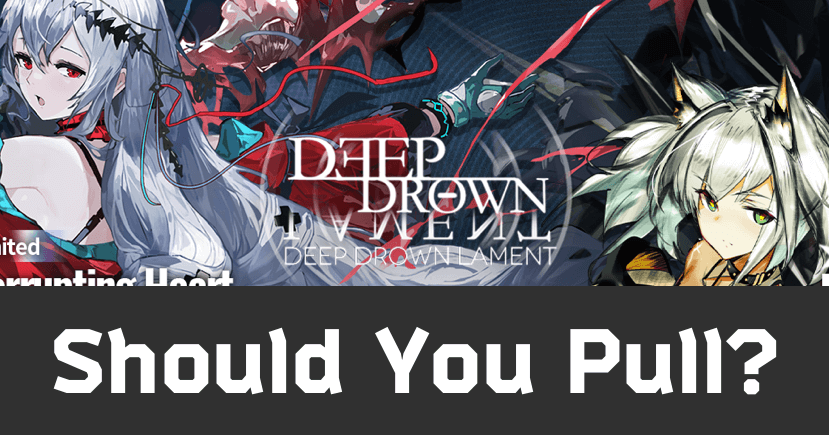 Test out your luck for this banner on our:[Deep Drown Lament] Summon Simulator!

YES. Many Doctors have been saving for this banner, and not without justification.

You should not pull on this banner just because there are limited units on it. Be aware of what these Operators do and whether you really want them before you make your final decision. (However, chances are good that you do in fact really want them. This is an excellent banner.)

+ E2 Talent is basically a free ATK buff, since it’s very unlikely you would ever leave Skadi without an ally within her attack range

+ S1 makes Skadi much tankier and causes her to take part of the damage that allies within range would take, spreading out the damage so it’s easier to survive (and it also increases her regen strength)

+ S3 is also a huge ATK-buffing Inspire effect to all allies within range, which is often stronger than the Pure damage being dealt

= Cannot be used as part of the same squad as Skadi (this is more of a downside for regular Skadi, though)

- As a limited unit, increasing her Potential can be difficult and/or expensive, though it is not necessary

- S3 turns off Skadi’s regen and causes her to take damage instead over the duration; without a source of external healing, this Skill is guaranteed to kill her when used (she does 100% of her max HP as damage over 20 seconds)

+ Can summon Mon3tr, a fast-redeploy Block-3 bruiser of a unit

+ At E2, Mon3tr inflicts Pure damage and Stun on all nearby enemies when defeated

+ S1 makes Kal’tsit and Mon3tr very tanky for a short duration, with DEF increases for both and Physical Dodge for Kal’tsit

+ S3 gives Mon3tr a huge DEF buff and a decaying ATK buff and turns its attacks into Pure damage; currently, this is the best source of Pure damage in Arknights

- Kal’tsit herself has very low ATK and prioritizes healing herself and Mon3tr over any other ally, so she’s not a good Medic for healing purposes

- You have to deploy Kal’tsit before deploying Mon3tr, and both cost DP, so she can be a bit slow to get up and running. Also, both of them count toward the deploy limit, so she takes up 2 Operator spots.

- If Mon3tr is deployed outside of Kal’tsit’s attack range, it has 0 DEF, which can be bad

- If Mon3tr doesn’t kill at least one enemy during S3, it takes half its max HP as damage when the Skill ends

+ S1 gives her Block-0, an ATK buff, and the ability to hit twice per attack

+ S2 reduces her current HP (triggering her Talent), buffs her ATK/ DEF, and gives her one charge of a Shield that negates an incoming attack

= Has Block-1 (typical of Enmity Guards)

= Generally has more survivability but less DPS than other Enmity Guards

= Skills are quick to charge, but also do not have very long durations

- Usual archetype weaknesses: Can't be healed directly (although regen does work) and has a high DP cost

- S1 does a lot of damage but makes her less self-sufficient, since she needs help from allies to keep enemies in her attack range during S1’s Block-0

+ S2 slows the approach of ground-based enemies unless they’re immune to Stun. Can fill an area with mines during gaps in attacking.

+ S3 deals multiple instances of splash damage to multiple targets; if enemies are grouped together, they will all take damage multiple times, resulting in massive burst

- As a limited unit, increasing her Potential can be difficult and/or expensive, though it is not necessary

- Because of her slow ASPD, she doesn’t usually trigger her Talent’s bonus damage with her own regular attacks 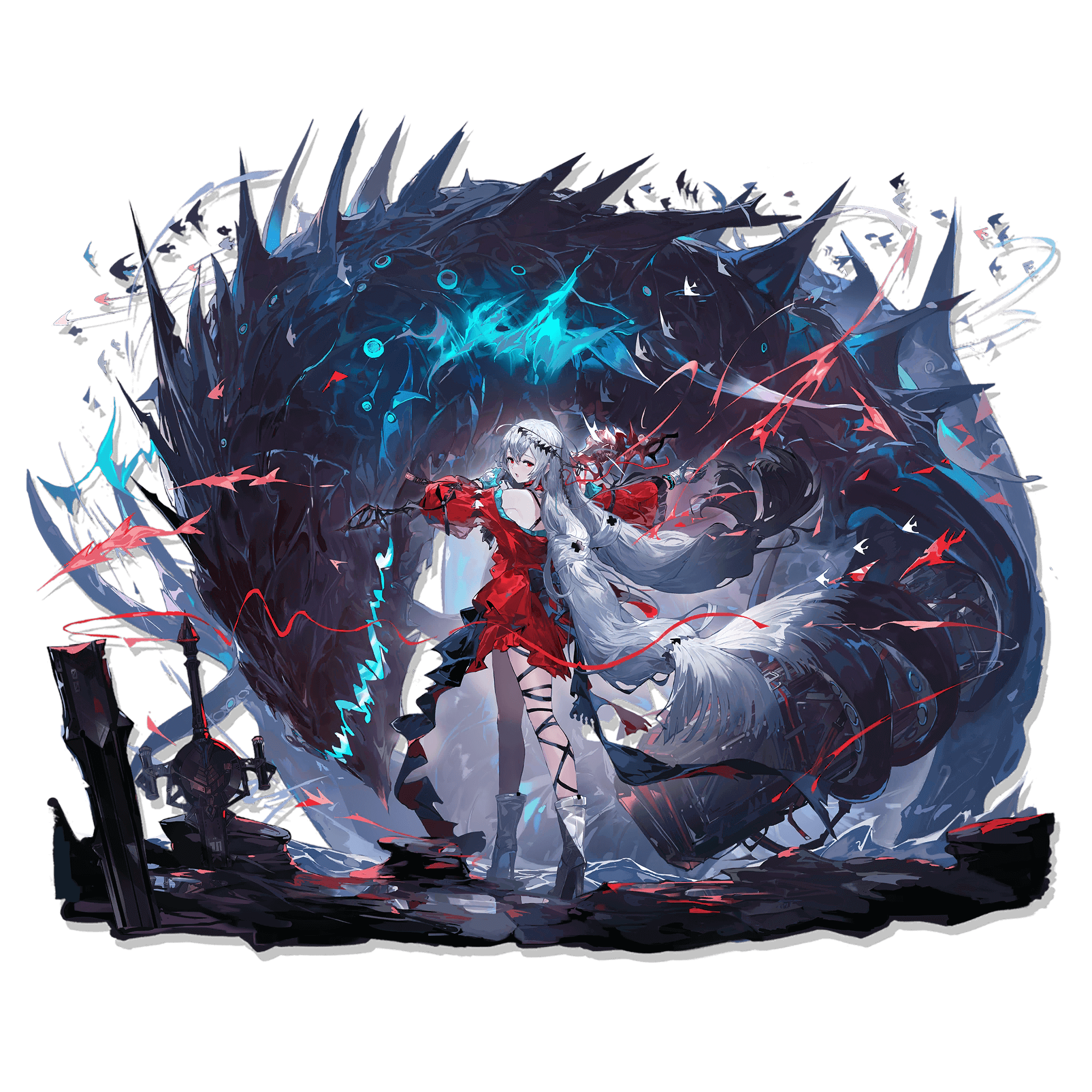 Skadi the Corrupting Heart (or Skalter, as the fandom calls her) is an alternate version of Skadi that is accidentally destroying the world with her Grey-Goo-inducing siren song. Although the power of her voice seems to be causing her to deteriorate as well as the people around her, she's still got the wherewithal to help Rhodes Island. And talk about helping! She’s equipped with HP regeneration, monstrous Inspire buffs, and face-melting Pure damage, and she uses a Seaborn mouthpiece to throw her voice (literally) to any part of the field she pleases. And she does it all in a cute little idol singer ensemble. Blatant fanservice or barbed comment on the music industry? You decide! 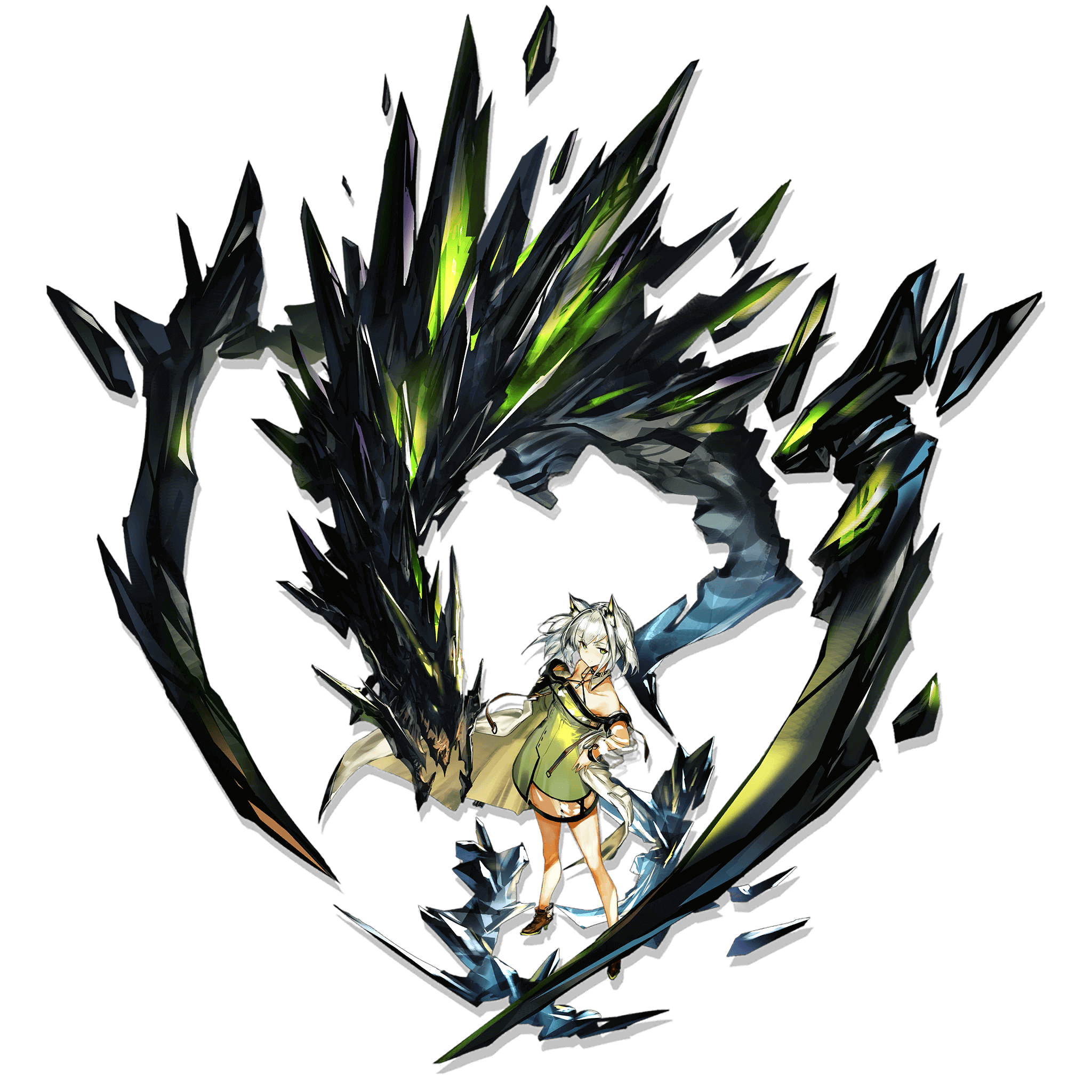 Kal’tsit has been a fan favorite for a long time, and there’s no shortage of Doctors who have been waiting for her to stop nagging in the background and take the frontline role she's clearly capable of. And oh boy, does she not disappoint! In synch with her monstrous assistant Mon3tr, Kal’tsit can take any enemy formation—from a mob of small fry to a massive boss—and tear them up like junk mail. What’s that? A Medic should be “helping others”? Look, if you can’t take care of yourself, don’t expect Kal’tsit to do it for you. 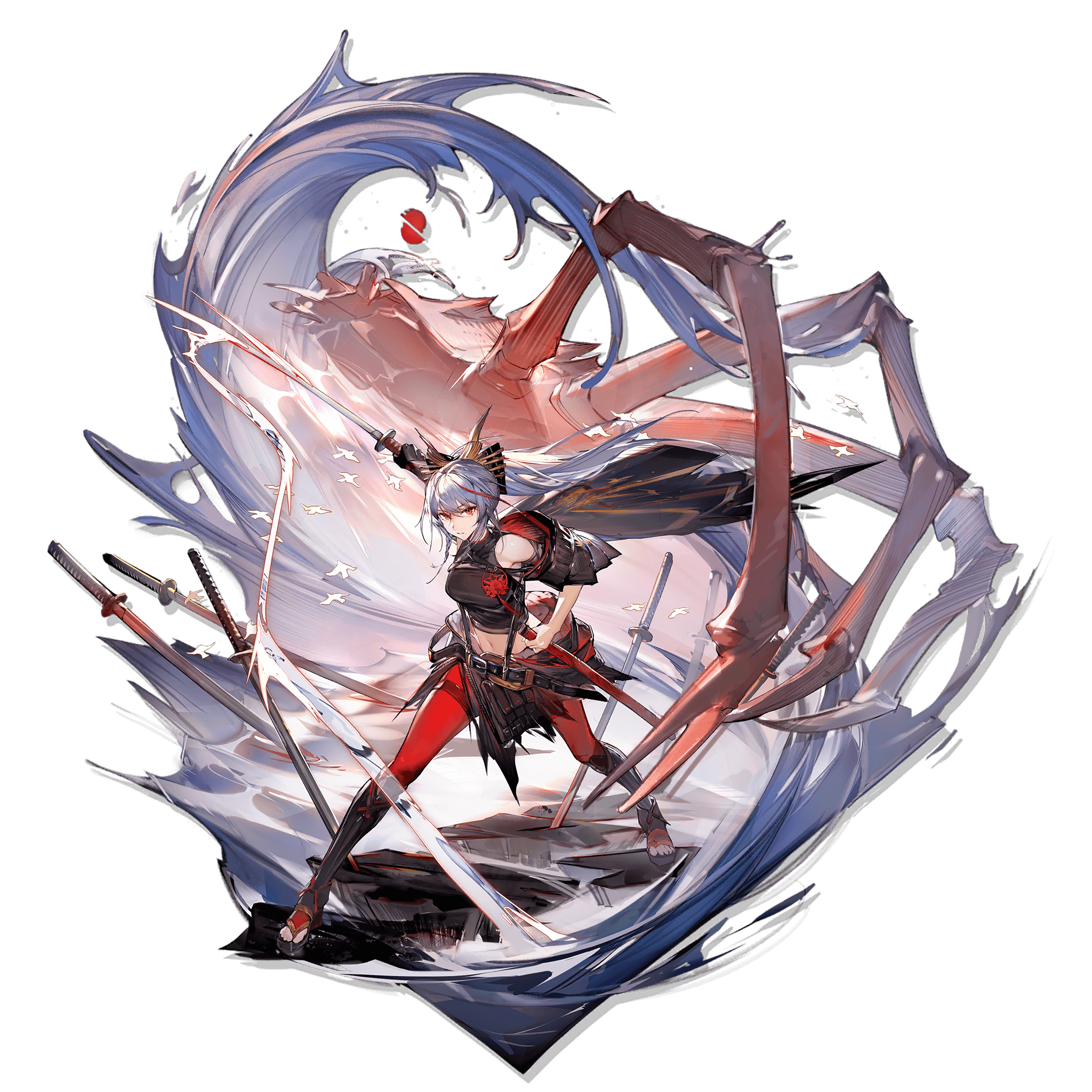 Akafuyu is blind as a bat and probably drunk to boot… so clearly she’s perfectly suited for the battlefield! How she even figures out where the enemy is, we’re not too sure, but that doesn’t stop her from slicing and dicing all comers with her defensive Nobukage-ryu fighting style. 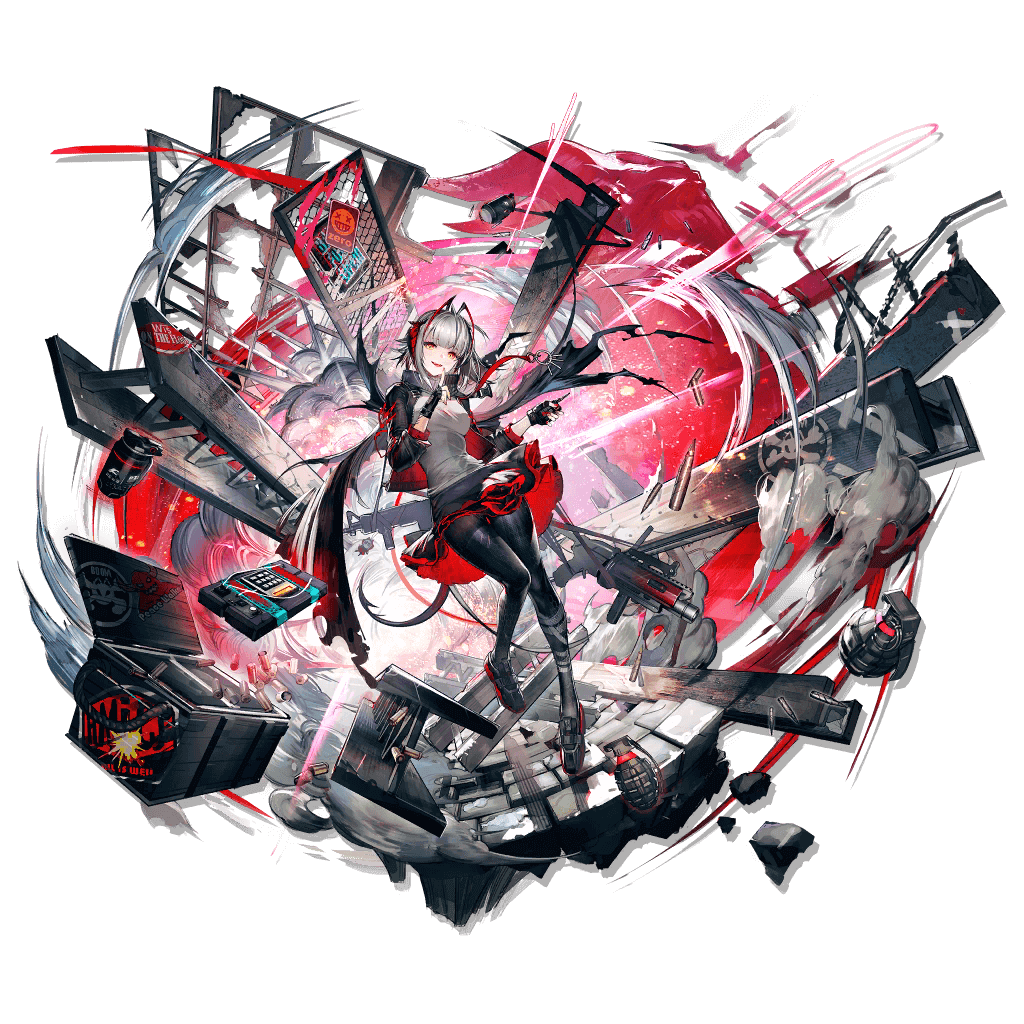 Everybody loves a good villain! Sardonic, sadistic, and stylish, W brings her full suite of sneaky subterfuge to the battlefield with AoE grenades, Stunning landmines, and a Talent that increases the damage dealt to Stunned enemies within her range. If you’re expecting this double agent to fight fair, you’ll be sorely disappointed. And also probably on fire.

Bored Doctor Chronicles #53: A rose for me and a rose for you
Take a rose (click for more details) 735 posts - 28 participants …
When will CN get the new Nian family member?
Self explanatory title. I’m curious, afterall i’m collecting them all. Plus, i’ll…
Whats the deal with 1 block guards?
I think im too used to using aoe and ranged guards so neither leveled or used any 1…
Bored Doctor Chronicles #52: AK Christmas Lotto When?
Bonus NSFW ones (not *super* NSFW but never hurts to be safe) (click for…
Bored Doctor Chronicles #51: Let's play Pokemon!
Have some art of Sinnoh Legendary and Mythical Pokemon. Pokemon Brilliant Diamond and…
Read More