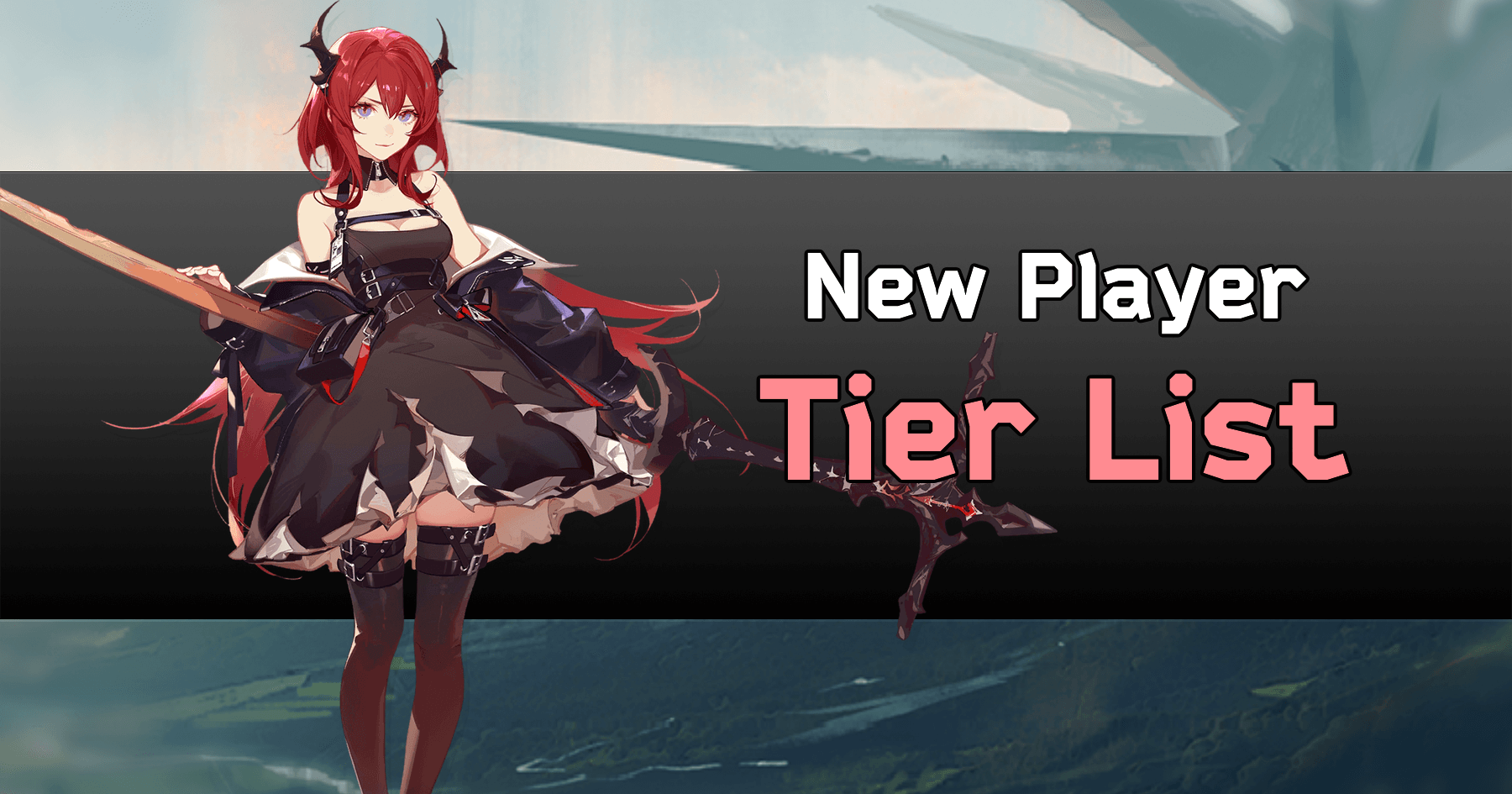 TL/DR How To Use

Arknights Guide: Best Operators To Promote For RIIC Base Skills

Other Resources Useful To New Players

An Operator List that can be filtered and sorted can be found here:

Kal'tsit: Kal'tsit is a DPS unit disguised as a Medic, so don't let her classification fool you. Her healing output is quite bad, and she prioritizes herself and Mon3tr no matter what, even if another unit is a hair away from death. As a DPS unit, though, she is... well... a mon3tr, as her summon has extremely high stats and high damage potential, especially with S2 or S3.

New players will have to learn how to use, position, and summon correctly, and plan for the 30 DP it takes to summon both her and Mon3tr. In return, they get quite a bit: Two Operators (a medic and an AoE Guard) for the development costs of 1, a fast-redeploy operator, and an operator that will be able to mow down most early-mid game content with ease.

Gladiia: Every player should have a Puller, and Gladiia is undoubtably the best overall Opartor in the Archetype. Even though lower rarity Pullers can satisfy the early/mid game pulling job just as well, Gladiia, with her decent DPS and self sustain, has the extra benefit of being able to double as a good Guard for players with limited rosters. Thus, new players will get much more out of the investment than "just a Puller".

Skadi the Corrupting Heart: An amazing buffer and a late-game meta unit. For early game, her impact will depend a bit on the players roster and ability to use her properly. At E0 she cannot buff or summon, and at E1 her support buffs are dependent on her stats, which are obviously lower pre-E2, limiting her support ability.

Some things that make her less new player friendly: Her range requires her to be closer to the front lines, she does not attack or heal directly, and her healing may not be enough to replace the use of a medic in some situations. Thus, players may still have to deploy a full blocker + healer + DPS team anyway, which will be enough to clear early stages without the use of a buffer. Also, for teams with limited rosters, buffers are most effective when they have other good Operators to buff.

On the other hand, in cases where she CAN fully replace a medic, she will make things much simpler, and her buffing will allow players to clear content much easier with worse or less developed Operators than they otherwise could, thus potentially allowing players to progress faster with less development resources needed.

Thus, her rank could go up for savy new players that can use her well, or down for those that cannot.

Akafuyu: As a defensive oriented enmity guard, she'll be able to take some hits while 1v1ing, but no inherent regen will limit her soloing staying power. There are just too many good or better 1v1 options, especially early/mid game, and at lower rarity/cheaper development cost, to warrant investment.

Mousse: up to C+ from C: 1 block archteypes tend not to be high priority developments, so neither Mousse nor Astesia are recommended for new players, but Mousse's lower development cost and better niche use means she should be higher than Astesia.

Astesia: down to C from C+: 1 block archteypes tend not to be high priority developments, so neither Mousse nor Astesia are recommended for new players, but Mousse's lower development cost and better niche use means she should be higher than Astesia.

Filter by Class or Archetype

Team Category: Situational
Splash Arts damage for high DP costs and short range. They are useful early on, but fall off greatly later in the game.

Team Category: Optional
Casters whose attacks jump between close enemies and slow them.

Team Category: Optional
Casters that store up normal attacks when they aren't attacking.

Team Category: Optional
Casters that have Drones whose damage increases when continuously attacking the same target. From a team building perspective, can be viewed as the same role as an ST Caster

Team Category: Optional
Ranged units that do true AoE Arts damage when a Skill is active. When a skill is not active, they do not attack, but have increased DEF and RES, making them very survivaable for ranged units.Their range and functioning create a higher learning curve for new players than other casters.

Team Category: Core
You bring these when the game throws heavy defenders at you that laugh at your snipers' attacks. You can get by with just one. Note that for units without high DEF, you'd rather bring a sniper for more damage, so casters that prioritize high DEF enemies (Ceobe when using s2, Steward's talent) are very valuable (as those are the enemies you want to use casters against anyway).

Team Category: Optional
High block count Operators that deal Arts damage. They tend to have higher DPS and Arts mitigation than normal defenders at the cost of worse physical/general survivability. New players might find them more useful when they have less melee Arts damage or mitigation options.

Team Category: Optional
Is it a Guard disguised as a Defender? Or a Defender disguised as a Guard? New players may have a tough time figuring out exactly how to use this Archetype to its fullest. The low block count makes it hard for them to fully block lanes, and their SP regen means they can't charge their skills when not blocking. But their stats are high and skills are strong.

Team Category: Core
Defenders and medics are often ranked by their relative utility, so a class that brings both block 3 (at E1) and healing in addition to further utility is a strong combination.

Team Category: Core
The bread and butter blocking class. These units stop the flow and can take a punch.

Team Category: Core
One of the most used guard types as they often double or replace defenders. Strongly recommended to develop 1 or 2. They gain a large power spike at Elite 2 promotion as it increases their block count and thus damage potential.

Team Category: Optional
Low DP costs allow for early deployment, but low ATK and fast ASPD can give some of them problems agains high DEF enemies.

Team Category: Optional
An archetype that hits twice per animation but has a lower ATK stat because of it. Their normal attack DPS falls off against higher DEF values. Their skills being able to hit drones can be helpful for new players with limited rosters

Team Category: Optional
Can't be healed directly, so must be deployed wisely, but have built-in self sustain

Team Category: Core
Heals 3 targets every normal attack, but typically at lower amounts than single target healers. Very useful early on when you're learning the game. It is more optimal to run without them when possible, especially since there are Operators who can heal the team or themselves and still cover other roles/utility. For this reason, the best Medics are those that can provide more than just healing.

Team Category: Core
Single target healers. Very useful early on when you're learning the game. It is more optimal to run without them when possible, especially since there are Operators who can heal the team or themselves and still cover other roles/utility. For this reason, the best Medics are those that can provide more than just healing.

Team Category: Optional
Long range, but low DPS despite their high ATK stats because of their slow attack speeds

Team Category: Optional
They prioritize heavy enemies first and have a long but funky attack range that doesn't allow them to attack enemies close to them

Team Category: Situational
Not used nearly as often as Pushers, but every player will want to have one with developed Skills.

Team Category: Situational
Their main job is to push things into holes when the map allows for it. Every player will need one with developed Skills.

Team Category: Optional
Self damage can make them awkward to deploy and use easily.

Team Category: Optional
They don't block and have lower targeting priority from enemies, which allows them to be safely deployed in grids that blocking Operators would not survive. Unique range and True AoE attacks offset their very slow attack speed. Can be very useful in some cases, but require some knowledge and planning to use effectively

Team Category: Optional
Fun but unnecessary. Requires micromanagement and a lot of DP to use well.

Team Category: Optional
Typically unnecessary in the early game, where your Operators and the enemies are weak. Grows in value for lategame as their relative effects increase. Even then, though, adding another DPS unit is often more effective.

Team Category: Optional
An archetype that takes a lot of game knowledge and good timing/ positioning to use well. Not recommended for beginners overall due to their complexity.

Team Category: Core
The best sources of DP. They can't always hold lanes because they stop attacking and blocking when they use their Skills. They are the DP generating meta, so develop and learn one early.

Team Category: Optional
The deploy on ranged grids and can summon Reinforcements.