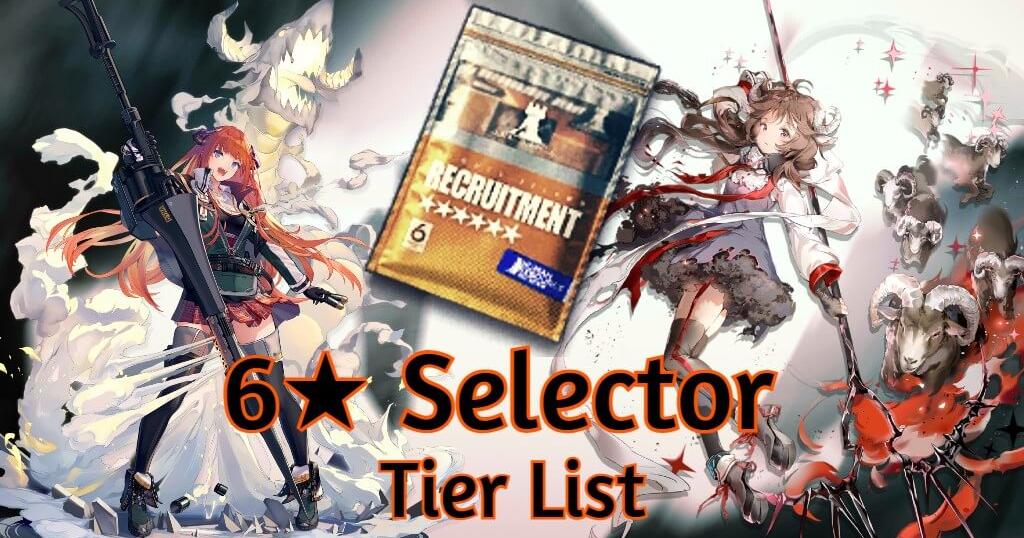 As part of the Autumn Fan Appreciation event coming this October 21st, a new, very special pack will be temporarily added to the Store. For (presumedly) $29.99, this pack contains one Ten-roll Headhunting Permit and, most importantly, a Top Operator Transfer Permit, allowing you to select one of the non-limitedl 6★ Operators released up to Blemishine.

This tier list presents which operators will provide the most bang for your buck if you decide to buy the pack. Remember that Operators are not ordered within tiers.

Both Surtr and Thorns are incredibly powerful units that can fit in almost any team, be it due to their versatility or their sheer power. This alone wouldn't be enough of a reason to place them above other metagame staples, but these two, having been released fairly recently, will not show up in the Certificate Store for quite a long while. If you are missing any of them, these two operators are a completely safe bet.

If you are not missing any of the units in the tier above this one, these three are your next best options. Ever since their release Eyjafjalla and SilverAsh have been the prime DPS units for Arts and Physical Damage respectively, and to this day they remain extremely safe and effective options to bring anywhere: from simple, straightforward events to the endgame territories of Contingency Contract.

If you were playing during Bagpipe's release you also probably understand why she's placed next to these two powerhouses. Back then she was exalted as a true meta revolution, both because of her magnificent DPS for a Vanguard and because of her supporting talents, which propelled an already very strong archetype, Flagbearer Vanguards, even further beyond. She's, simply put, the queen of the early game.

The only reason why Saria isn't placed in the same tier as the powerhouses above is because of her lack of a DPS-oriented kit. Still, Saria remains as a prime support Operator full of versatility and incredibly powerful abilities. From amazing healing, to tanking, to an incredible DPS support role with her third skill, which amplifies Arts damage output by a massive amount. If your roster already has the Operators mentioned previously, Saria is a safe bet that will kick your playstyle up a notch while simultaneously synergizing with what you already have, specially Eyjafjalla and Surtr.

The units in this tier, while not as incredible as the ones in the tiers above, are still quite respectable and definitely good choices. Be it because of their amazing DPS (Exusiai, Ifrit, Blaze), great sustainability (Blaze) or incredible support (Suzuran, Ifrit), all these units are bound to mesh well with your roster and provide amazing synergies or cover for roles you don't yet have.

While not as powerful as their counterparts in A tier, there's a reason why these are just in A- and not lower. Neither Angelina nor Schwarz are anything to scoff at. While their kits may not be as loaded and versatile as the ones in higher tier operators, they still see their fair share of endgame usage and can also make for great options for players with limited rosters

While the options in this tier are still quite appealing, it may be worth reconsidering whether or not you should purchase this package if this is all you're missing. Don't get me wrong, their kits are still really good and see a lot of usage, but their niches are more specialized or already have other operators that do their jobs better in the tiers above. Still, they are not bad choices by any stretch of the imagination, and will make quite nice additions to your roster.

If you are looking for units in this tier, I would honestly recommend you don't buy the package or use it on getting valuable potentials for the units in higher tiers. Again, while these units are not bad by any means, their position in the meta has faded away recently, either because there are better options available or because their playstyles simply aren't as useful anymore.

I would not recommend purchasing these units under any circumstance. Their current status in the meta is either completely non-existent or irrelevant, as all of them have other units in higher tiers that can perform their job better under most circumstances. If you're thinking about purchasing a unit in this tier, I'd rather recommend you get a powerful potential for higher-tiered units, like Surtr.

Bored Doctor Chronicles #53: A rose for me and a rose for you
Take a rose (click for more details) 521 posts - 28 participants …
When will CN get the new Nian family member?
Self explanatory title. I’m curious, afterall i’m collecting them all. Plus, i’ll…
Whats the deal with 1 block guards?
I think im too used to using aoe and ranged guards so neither leveled or used any 1…
Bored Doctor Chronicles #52: AK Christmas Lotto When?
Bonus NSFW ones (not *super* NSFW but never hurts to be safe) (click for…
Bored Doctor Chronicles #51: Let's play Pokemon!
Have some art of Sinnoh Legendary and Mythical Pokemon. Pokemon Brilliant Diamond and…
Read More