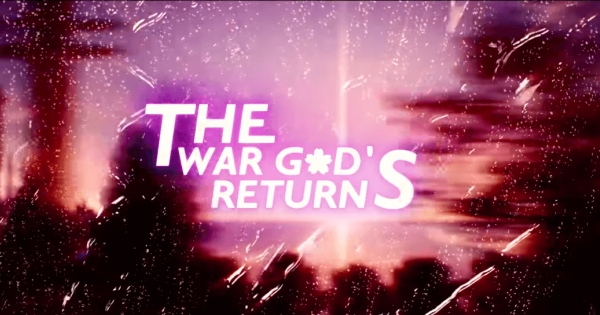 Azur Lane EN is expected to release IJN Battleship Mikasa for the first time in "The War God's Return" Event soon. 5 new IJN ships will be making their debut on the English server and some of them bring alternative costumes that can be acquired for Gems, the premium in-game currency. A special quest-line to obtain the Ultra Rare™ Auxiliary Equipment "Z Flag" will also be available.

The English Azur Lane server is expected to receive Battleship Mikasa’s introduction event, “The War God's Return” for the first time at some point in the near future.

Players expect the event to drop by next week. 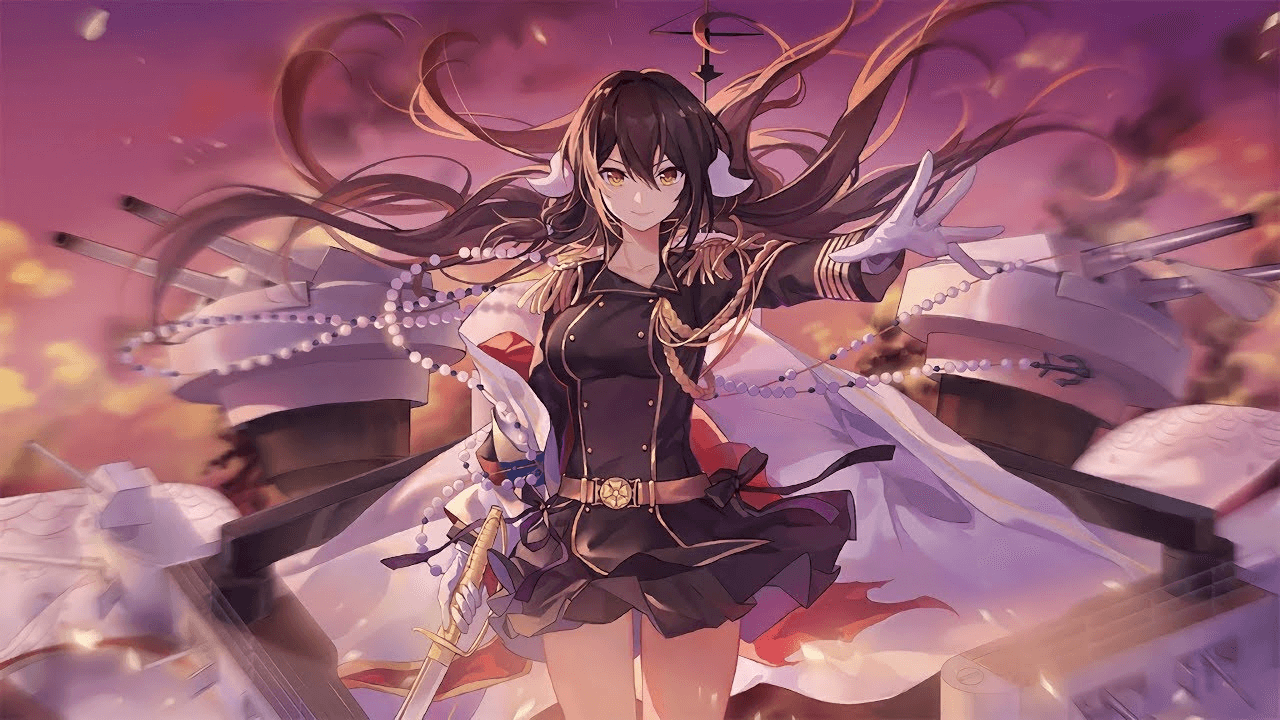 This event features a gacha banner that spans for about two weeks and features 5 new IJN ships, as well as costumes for some of them but no special event maps. As this event is purely construction driven, there are no other means of acquiring event ships — something not many want to hear considering EN seems to continue its never-ending Wisdom Cube murder spree.

The Ships and the Gacha 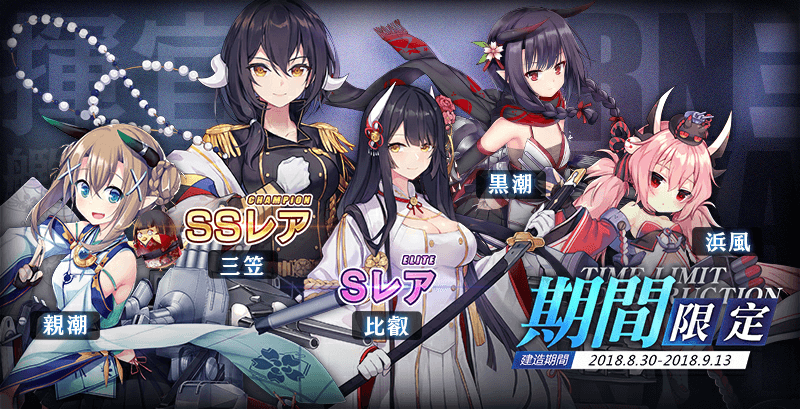 The War God's Return will be introducing 2 new Battleships and 3 Destroyers with its limited gacha banner: 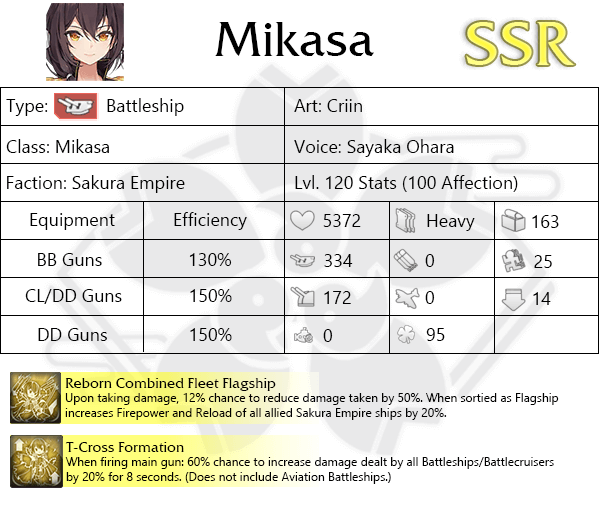 The long awaited and self-proclaimed "daisenpai" Mikasa will be arriving soon. Famous for being a very old (date of launch: 8 November, 1900), the legendary ship saw action in the Russo-Japanese war of 1904-1905. Following a fire and magazine explosion, Mikasa sank at her moorings in September 11th, 1905. She would be refloated 11 months later and repaired and reconstructed at the Sasebo Naval Arsenal. Mikasa would once again see active service by 24 August, 1908, a fact that can be referenced in her Skill name, "Reborn Combined Fleet Flagship". To date, Mikasa remains a memorial warship in Mikasa Park, Yokosuka, Japan and a recurring location for offline Azur Lane events.

In terms of gameplay, Mikasa was one of the very first (if not the first) IJN Flagship launched. Her "Reborn Combined Fleet Flagship" will no doubt be of value to players looking for a thematic IJN fleet as it provides a nice 20% Firepower/Reload buff to all IJN ships in Mikasa's fleet. To add to this, Mikasa's second Skill buffs the damage dealt by friendly Battleships and Battlecruisers by 20% (not limited by nation) on top of the strong Firepower buff. That is a lot of damage that Mikasa and her allied IJN Battleships/Battlecruisers will be dealing.

Mikasa's equipment slots are unorthodox to say the least, as she carries Destroyer guns in her third slot, instead of the usual Anti-Air guns. This setup makes her strong in close quarters combat but mediocre at Anti-Air and therefore not too optimal for World 12 and above. 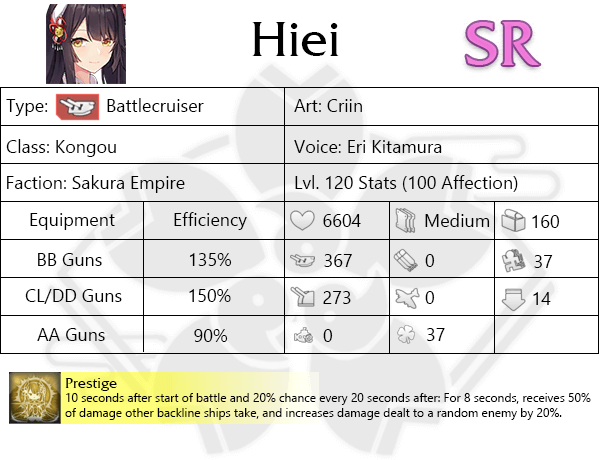 The last yet-to-be-introduced Kongou sister will be making her debut alongside Mikasa. The Japanese Battlecruiser Hiei saw service during both World Wars. Following the Washington Naval Treaty of 1922, Hiei was demilitarized and turned into a training ship in 1929 to avoid being scrapped. Once the Japanese Empire was no longer bound by the Naval Treaty in 1937, however, Hiei got reconstructed and turned into a Fast Battleship.

The Battlecruiser's gameplay is not as interesting as her involvement in Japanese operations, however. Hiei sports a default equipment setup and her stats are nothing to write home about. Her Skill, Prestige, allows Hiei to redirect and tank some damage that her backline allies would otherwise receive and increases the damage Hiei deals to a random enemy by 20%. The proc chance and timer values are far too weak to be useful in regular PvE battles, not to mention situational as the damage portion of her Skill only works on one enemy at a time.

The Skill might find some use in PvP where the backline can find itself highly pressured, and a single ship is much more significant than a mob, but there are similar Skills that offer much better returns out there, such as Helena's Radar Scan. 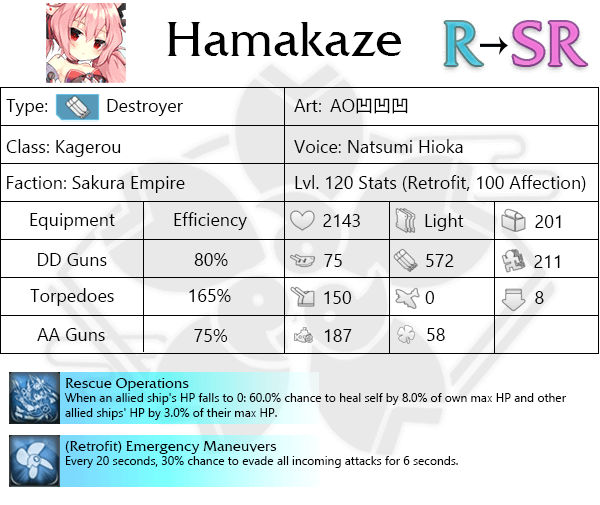 Hamakaze was one of the 19 Kagerou-class Destroyers, the successor class of the Asashio Destroyers. Hamakaze participated in many battles near the Solomon Islands in 1943, and was one of Yamato's escorts during Operation Ten-go, where Yamato, the largest battleship in the world at the time, would meet its demise at the hands of the USN Air Superiority.

Hamakaze sports one of the highest Torpedo stats in the game at 572 post retrofit and level 120, even higher than the renowned Ayanami. While her Torpedo stat and efficiency are extremely strong, this is not to say that she is a better torp boat than Ayanami, however, as she does not posses the amazing Torpedo Barrage that Ayanami enjoys, nor the 60% Torpedo boost Skill.

Hamakaze's two defensive Skills make her deceptively tanky for a Destroyer, with one of them granting perfect Evasion for 6 seconds - an effect that will render Hamakaze immune to all but persistent effects such as burning and flooding damage. 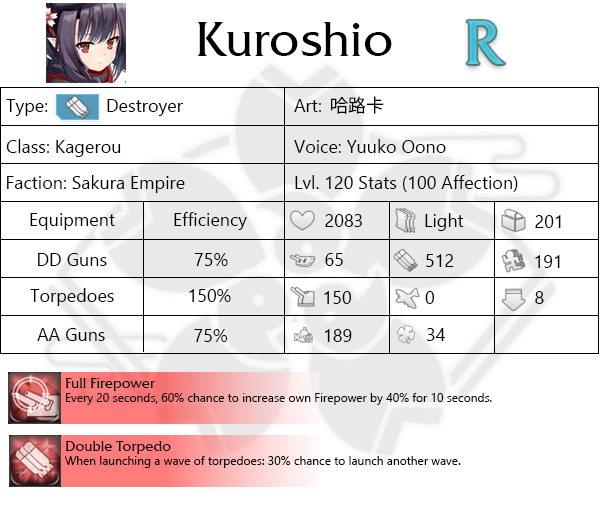 Third of the Kagerou-class Destroyers. Kuroshio participated in the 16th Annual Maneuvers of the Combined Fleet, and had to spend a month undergoing repairs at the Kure Naval Arsenal after colliding with the destroyers Minegumo and Natsushio in the Bungo Channel on her return from this event.

Kuroshio ultimately exploded and sank at Vila, Solomon Islands in May of 1943 when returning from a troop transport run after striking mines.

Kuroshio boasts a fairly high Torpedo stat of 512 and a decently strong efficiency of 150% to go with it, as well as a Skill that provides her a 30% chance to release a second wave when launching Torpedoes. This synergy makes her a decently strong budget Torpedo boat for those that like the playstyle.

Her second Skill, Full Firepower, while strong in values, is ultimately rather weak as Kuroshio's Firepower stat and Main Gun efficiency are atrocious — rendering Kuroshio a bit of a Torpedo focused one-trick pony. 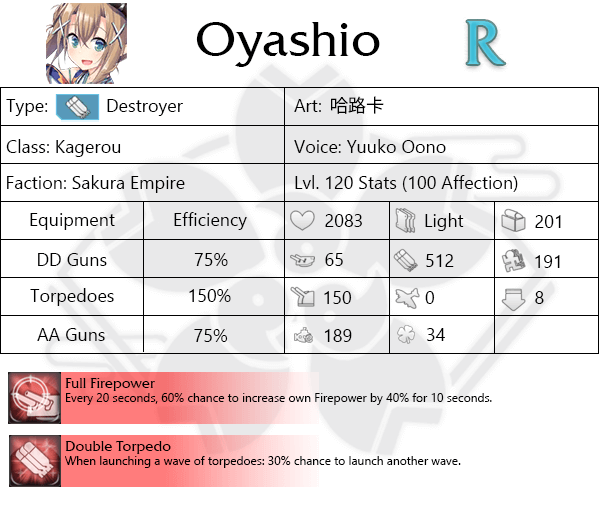 Oyashio was the fourth commissioned Kagerou-class Destroyer and is identical in gameplay to her sister Kuroshio. Oyashio served as an escort for the Aircraft Carrier Ryuujou during the invasion of the southern Philippines.

Oyashio ultimately suffered the same fate as her sister Kuroshio and struck mines on the way back from a transport run to Vila, Solomon Islands in May of 1943. Oyashio was hit by an air attack after the mines rendered her dysfunctional which spelled bad news for the crew.

Oyashio boasts a fairly high Torpedo stat of 512 and a decently strong efficiency of 150% to go with it, as well as a Skill that provides her a 30% chance to release a second wave when launching Torpedoes. This synergy makes her a decently strong budget Torpedo boat for those that like the playstyle.

Her second Skill, Full Firepower, while strong in values, is ultimately rather weak as Oyashio's Firepower stat and Main Gun efficiency are atrocious — rendering Oyashio a bit of a Torpedo focused one-trick pony.

Mikasa is expected to make her debut in the English server with "Style of the Sakura Capital" as an alternative costume. In this year's event rerun on Asian servers, Mikasa acquired the "Sakura Viewing Day" costume but this last one was not announced for EN. 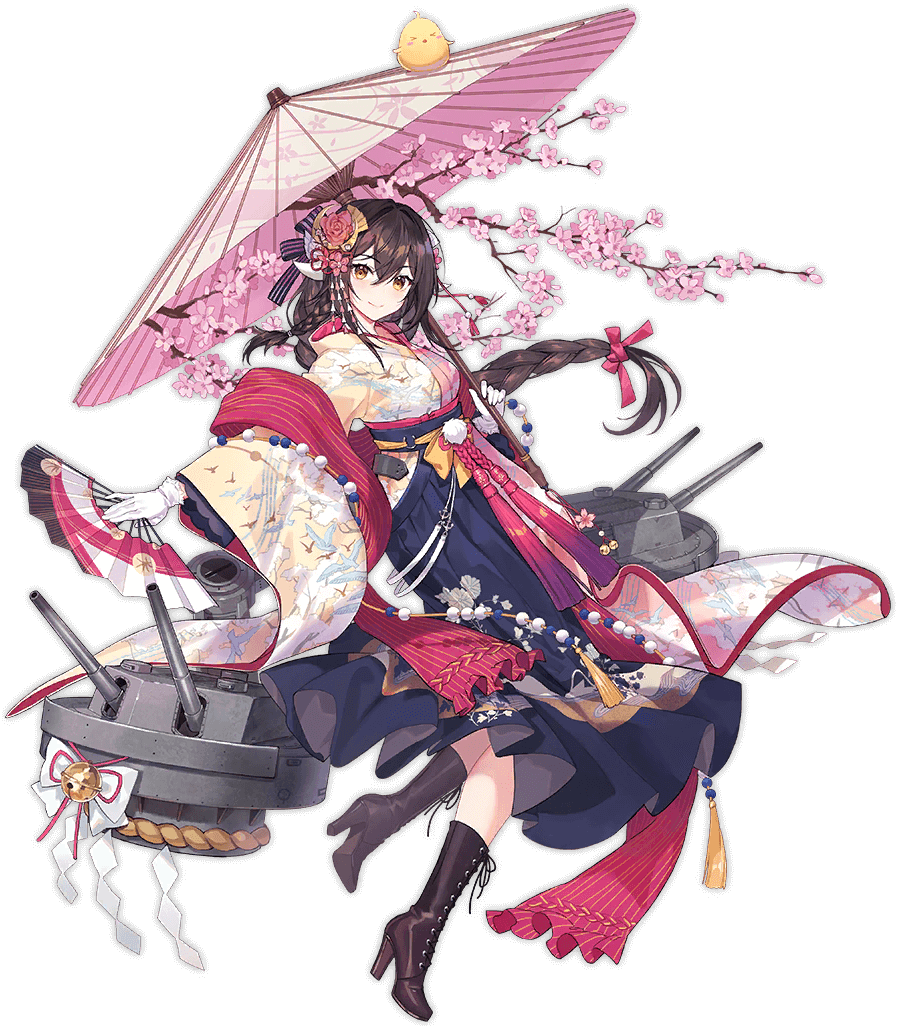 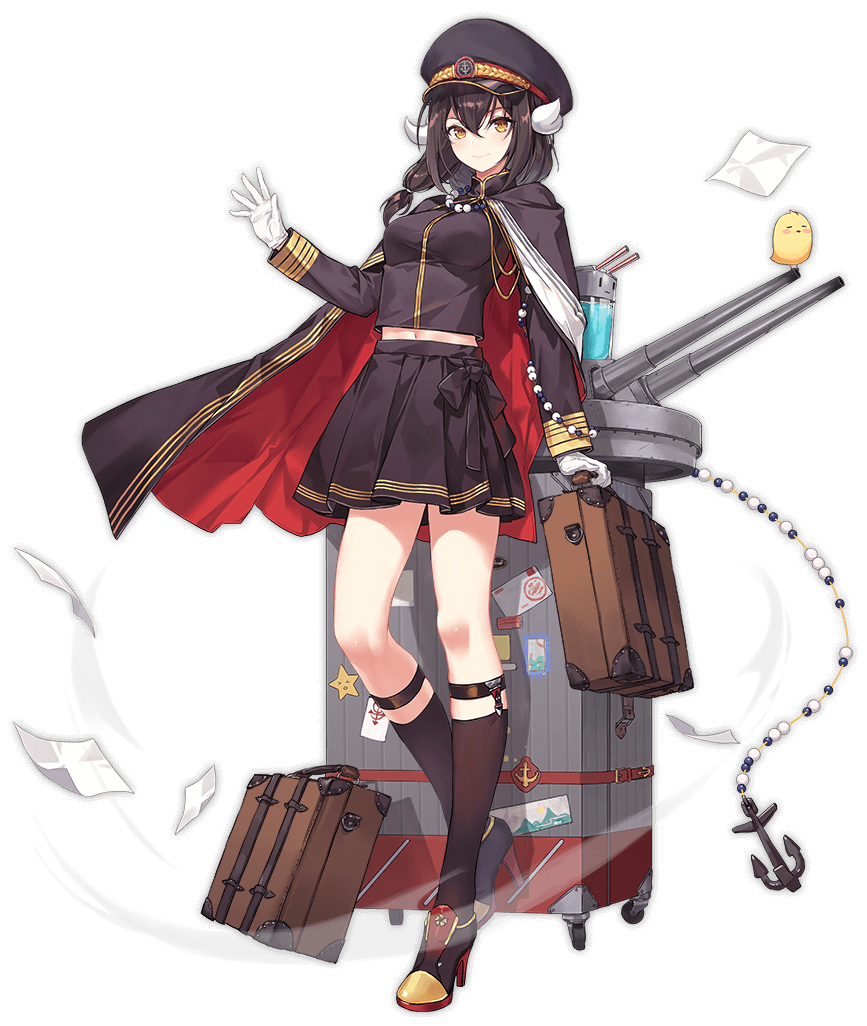 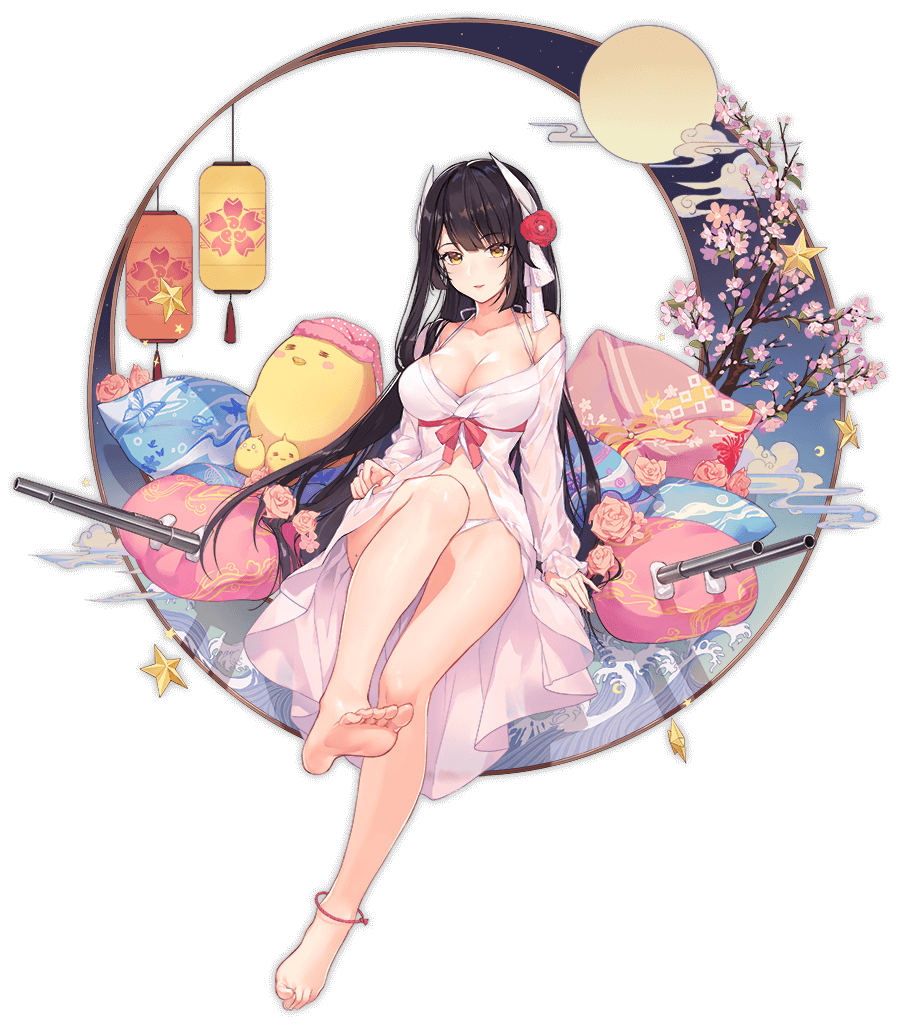 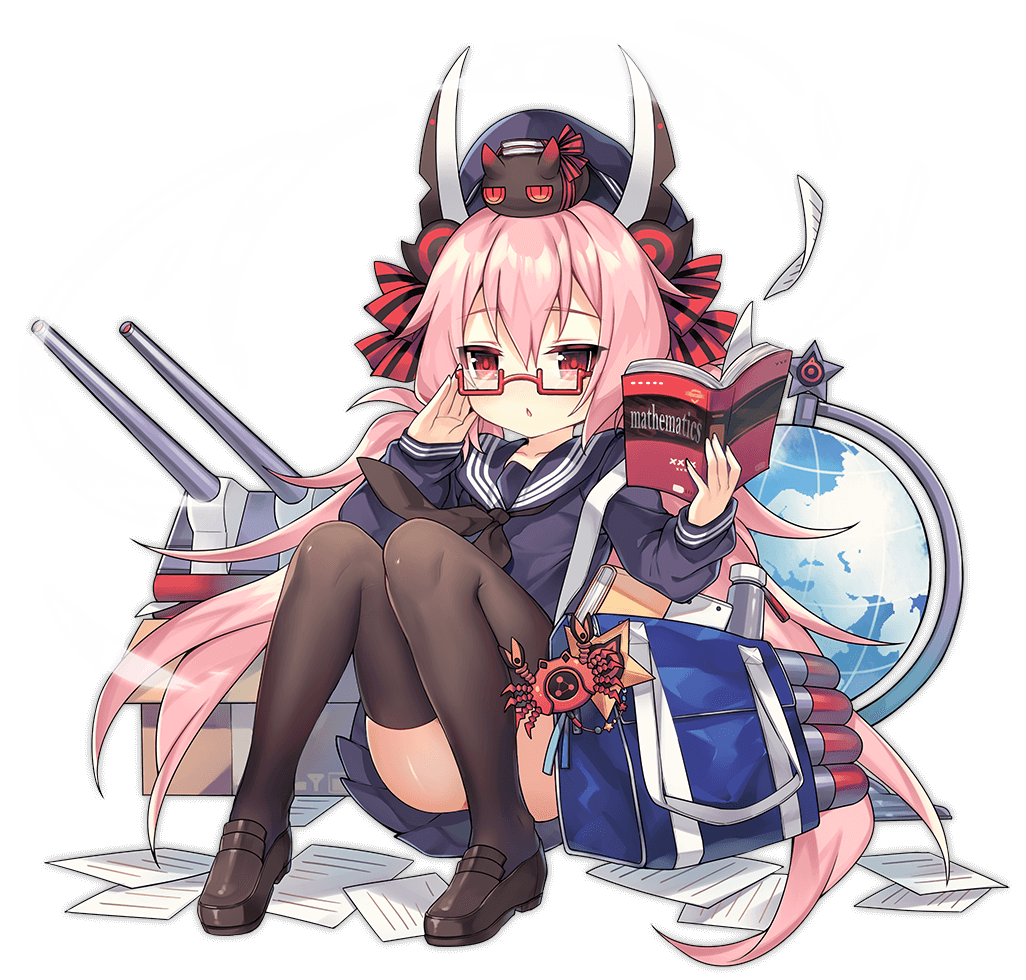 The event features a special Mikasa quest-line that requires the player to complete 4 tasks to obtain the “Z Flag” auxiliary equipment. Details on the Z Flag can be found here.

Tapping Mikasa’s chibi in the Academy will start the questline and lock the game into a special battle. Clear the battle to complete the first task.