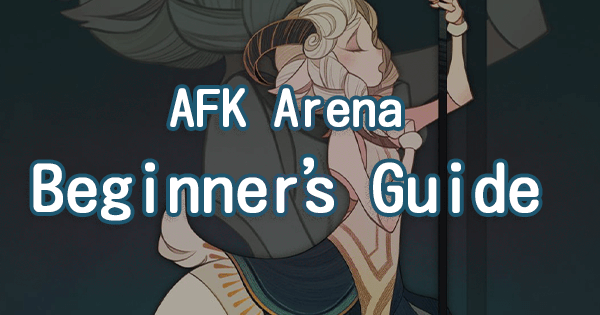 Many thanks to CapFat for sharing this guide! You can find the original post and discussion here.

Compared to other Hero collectors, AFK Arena makes it quite easy to acquire the full roster. Enhancing their power to maximum potential takes many dupes consolidated through the process of Ascension.

This site has a nice image grid showing how it works (via AFKarena.net) as does AFKarenax.com here. 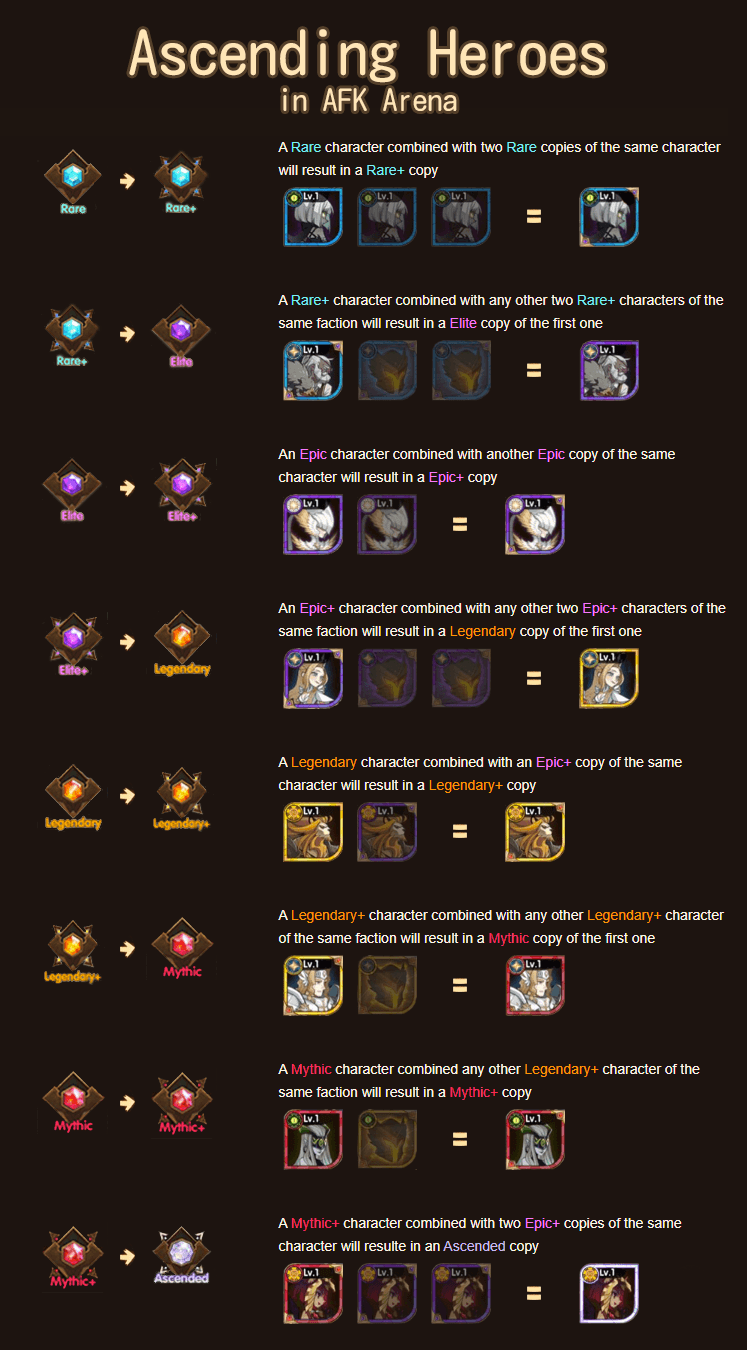 Note: Celestials and Hypogeans are an exception

There are 6 tiers of heroes-- only the first three can be pulled from the Tavern. Beyond that, Heroes need to be built.

You can check that out at the portrait painel at the heroes tab.

The first things to be noted are 2 main ascension caps for your heroes: Legendary+ and Ascended. To reach these ascension stages, you need copies of the hero you are ascending, any other ascension stage besides that, only requires fodder (stars aside). Getting copies of a specific hero is hard while, getting fodder is easy (time will do that for you). Focus on heroes that can get through these tier stages to have a smoother progress. Also, don't ascend too many heroes to Legendary/Mythic tier-- that will make you waste fodder and therefore time and progress.

Why does the Rule 240 exists? For several reasons really, some of them are:

Long Answer: The only things that can provide you constant progress in game are the ascendency tier and the level of your heroes. Gear will give you some boosts, but it is limited and there will be a point in which there will be gear floating in your bag and none of your heroes will want it-- even mythic rarity gear. Since the level cap is limited by ascension tier, what matters is getting copies of heroes, and therefore, buying heroes is the best way to get progress and anything that inhibits that is detrimental. Some people can say that in the lab store, the price of mythic gear makes it a worthy buy, since you can't get many heroes with that quantity of diamonds and mythic gear is quite good. However, keep in mind that even though this can be true, it's very subjective and getting more than a couple mythic gears this way is objectively bad.

Purple stones > tavern, however, you can't rely on elite soulstones alone to spend all your diamonds, so you should still buy heroes at the tavern. 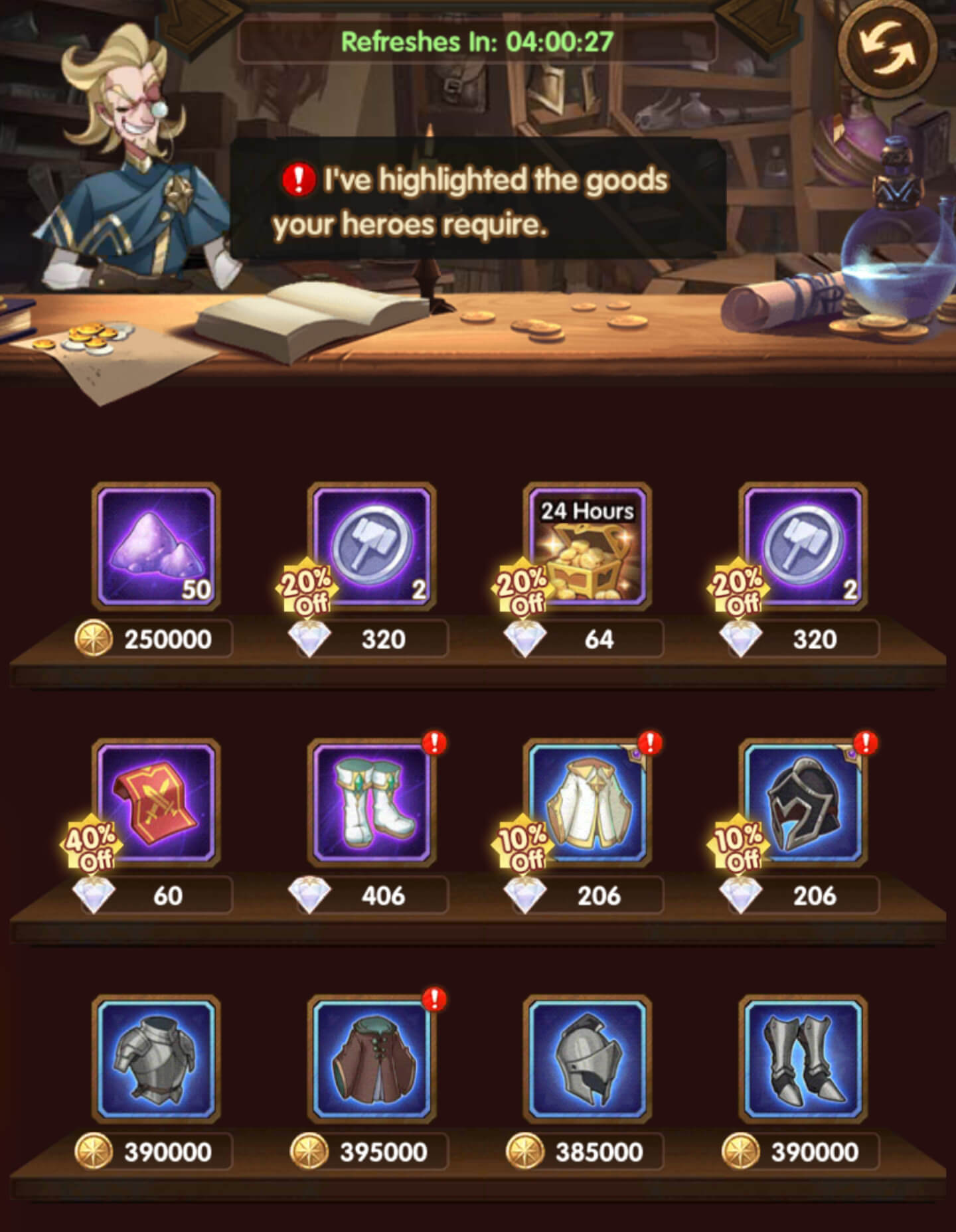 He lies! Hero's Essence is the only good deal here.

Spend gold only to buy the Hero's Essence (PURPLE COCAINE) at the store, which is used to level heroes and upgrade gear.

Be aware that spending gold at early gear is not recommended. Gold is a very limited resource until the very late game. Upgrading gear costs gold and you can't recover that gold, even though you can recover the exp (use the gear as fodder for the next gear piece). Any gear rarity other than Mythic has a very small time frame in which you'll use them, and mythic gear is very expensive to upgrade. You should save your gold for mythic gear, some will say that you can add a couple of stars to non-mythic gear without loss, and indeed, the cost is so low, you might not notice the difference.

First thing you need to know: You will be able to buy 2 heroes per month for a looooong time, (until sometime around player level 110 for f2p players). Choose 2 heroes and buy them until you have a total of 8 elites copies of them (enough for ascended)

Anything else other than the elite heroes at not worth it, this game is about the long run and that amount of purple dust is only worth 2 days of gameplay, can't you just wait another 2 days instead of "sacrificing" your chance of getting ascended tier heroes?

Which heroes to choose?

A general answer is: Nemora and Shemira, with Nemora being your first buy. Why? Shemira is the strongest unit of the game and nemora is super useful to get good progress at labyrinth and peaks of time, not to mention, Shemira is not the God Shemira until the end of the mid game (around level 161), when she has the skill setup that makes her... Shemira.

A specific answer is: it depends on what you got so far. For example: I got lucky at the early game and got copies of Nemora, Lucius, Belinda and Estrilda. That made lightbringers a very big payout for me (I also spent $1 in game and got myself an extra Estrilda and Hogan). I bought nemora and estrilda at the lab store for a long time until I had enough copies of estrilda to make her ascended and then I begun to buy Shemira instead. That allowed me to have the heroes I linked at the beginning of the post. If you have any doubts, ask someone about it on reddit or discord-- people are happy to share roster advice. Most people will, however, fall into the general answer above.

Fawkes is the best option from the Challenger Arena Store.

Maximizing the quantity of ascended tier heroes is important for the late game, try to think of what way will help you achieve this in the shortest amount of time and choose the order of who you buy accordingly

There are several guides out there, but I will be linking this one

When building teams, try to get the factional buffs. They are buffs that make comps work better, and will help you progress while you are learning about how to use each one of your heroes

Some Heroes that have high strategic value are

Fawkes: He will take the highest enemy dpser out of the game for some time, his primary target from what I've seen is Khasos, and Morvus after that, they 2 heroes that causes a lot of interruption at the bginning of the battle. Fawkes can cancel shields with his ult, including Brutus's Immortality one

Tasi: Does the same as Fawkes but for shorter periods of time and with a CC (Crowd Control) ultimate

Athalia: The game's sniper, place her mirroing her target's position and she will make her target become useless at the beginning of the battle, very effective against Arden/Saveas/Mirael

Mehira: Energy and Haste generator, better placed as middle backliner, with charm-styled ult, she has 175% health and is quite tanky despite low rarity tier

Lyca: Gives energy and Haste at the beginning of the match and opens up several possibilities with other heroes such as Arden

Arden: Possibly the strongest CC in game, his roots can make you win matches you wouldn't otherwise, very strong from level 161 onwards (capped at legendary+, unfortunately). Once a wandering redditor told me, those words of wisdom that I shall never forget, those words still echoes though my mind every time I see both Lyca and Arden in a late game stage: "You can only beat Arden with a faster Arden". Jokes aside, this isn't 100% true but still pretty accurate

Nemora: an easily attainable early-game healer available for purchase in the Labyrinth store. For endurance modes like the Labyrinth and general longevity, Nemora helps a lot, especially with Haste speeding up her ultimate.

The heroes above have such useful skills that even at low rarity can still be used against ascended tier heroes. My Athalia, Mehira and Arden are still at elite+ but still do their job. My Mehira can even tank level 200ish Ascended Silvinas of chap 18 (When Nemora uses individual heal on her and Silvina's tp doesn't crit)

Level distribution: There are 2 main ways to do so: with Carries (focus the exp on 1 hero) and with a more even team (close to equal distribution). The best carries of the game are: 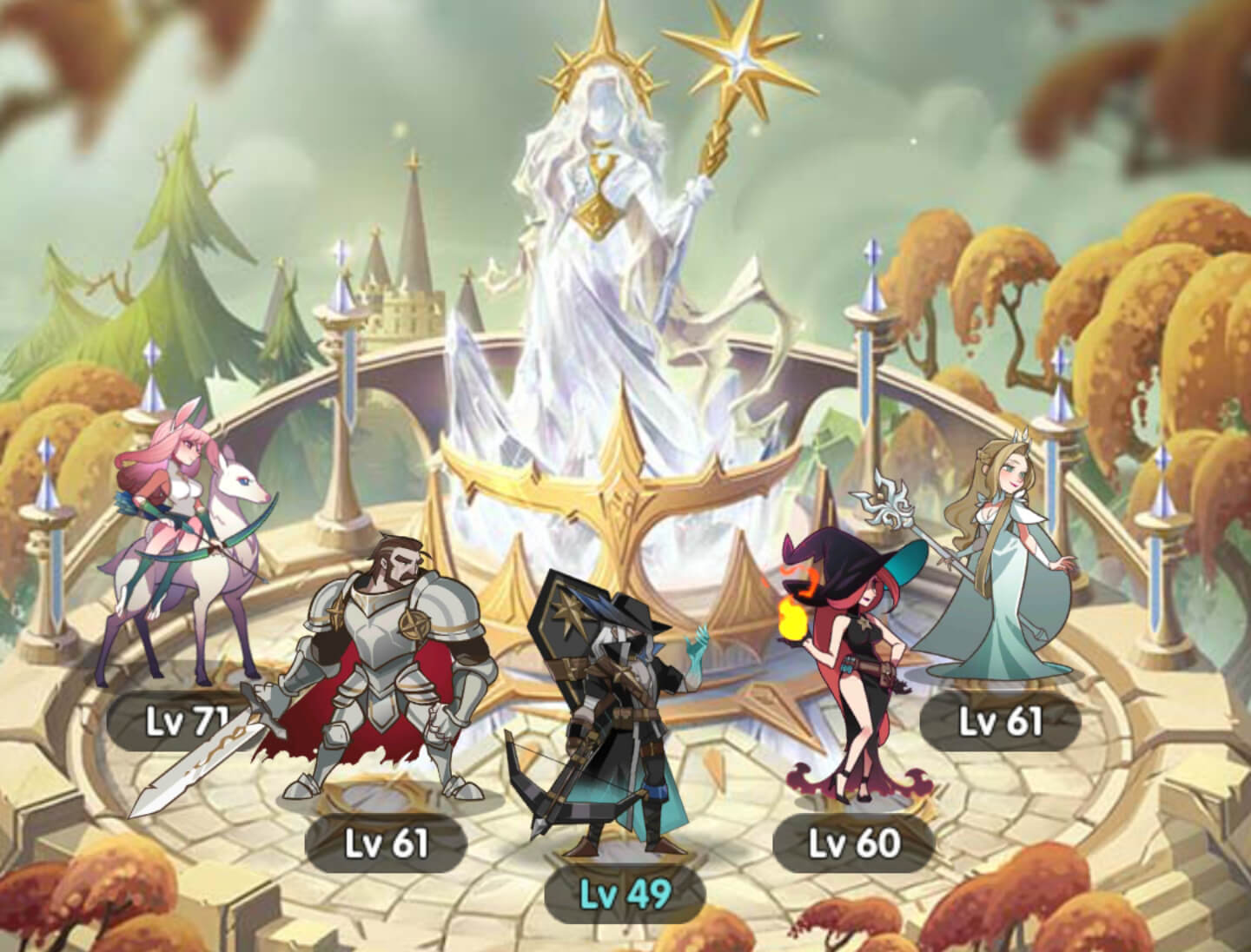 The Resonating Crystal takes your five highest-level Heroes and can boost other Heroes to that level.

You can quit from a fight and your heroes will be in the same way they were before the fight. For doing that, just click on the pause button at the lower left corner of the screen after the battle started. You can even challenge other enemies and come back to try that hard one later when you have more relics

Lucius/Nemora/Tasi/Mehira/Arden are all very strong heroes for peaks of time, for their sustain/CC. Peaks of time and the Labyrinth are all about surviving several fights without resetting the health of your heroes at the end of the battle. Have fun trying out the relics! Moonstone/Sunstone is a very strong relic combo btw

HOW TO CHECK VIP LEVEL AND BENEFITS (2 images)