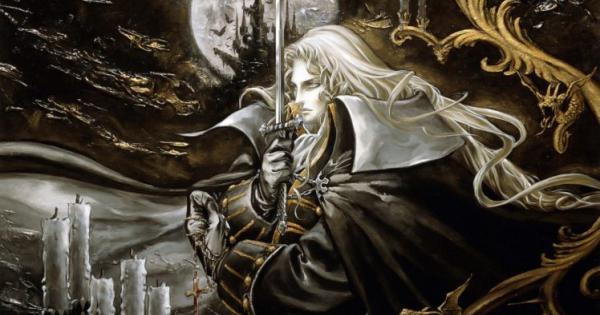 Obviously, the iconic characters are at the heart of Grimoire of Souls and bring the weight of Castlevania lore and nostalgia with them. All the characters have a lot of different and unique traits which set them apart from each other, but this makes it hard to digest exactly what each character does. So, I’m going to first go through what those traits are and how you should read them, then I’m going to dive into the characters themselves and break them down for you.

Today, we’ll be taking a look at your first character, and a fan favorite: Genya Arikado, also known as Alucard and Adrian Fahrenheit Tepes

Aesthetically, this character looks fantastic, sporting a different British look this time around, but as he enters combat he dons his classic Alucard uniform. He uses a sword which has wide, quick swings that cover a fair amount of area in front of him. Honestly, it reminds me a bit of Crissaegrim, although without the move-attack. He has a lot of forward momentum, though, and you can easily strike an enemy just out of their attack range. Alucard is the kind of character I’d suggest for players that love to move quickly and strike hard, but positioning incorrectly or having poor timing will punish the player a lot.

You could easily label Alucard as a character that emphasizes positioning and well placed attacks. His weapon skills typically force him to stop in place, but offer a lot more range and screen control than other characters’ skills. For instance, he has a Sword Wave that not only reaches across the screen, but also covers about a third of it in an Area of Effect. If placed correctly, it makes a powerful screen wipe. Damage-wise, Alucard is a boss killer with slow and powerful Weapon Skills that tend to stop him in place for a long time during or after using them. Honestly, I feel like Alucard and Godbrand would play really similarly, so I hope Godbrand appears as a costume for Alucard or as his own character!

That said, in my opinion, his best Weapon Skills are his Attack Buff, his Edge Skills, and his Rising Skills, which do the most damage and offer wide area of effects.

Finally, Bounty Hunt is a very different game and requires different strategies and equipment than Grimoire of Souls, so that will not be covered here.

Honestly, Wing Smash is almost insurmountably good. Wing Smash is a near-instantaneous teleport that Pierces, deals low damage, which is enough to kill Ghosts and Bats and a lot of other airbornes, as well as cancel projectiles that can be cancelled from being hit. The Piercing is the most important part, since it means you can essentially reposition yourself behind enemies to counter guarding quicker or dodge attacks. Not to mention this gives you a lot of forward momentum in stages, which helps as many do have a time requirement for extra gems.

Wolf Power, Wing Smash’s little brother, is worse in every way, in my opinion. It’s slower, grounded, and no longer Pierces until Tier 6, but it does go a lot farther, so that’s something. The reason I don’t care much for the distance in terms of Stage traversal is because Stages tend to get vertical fast, and when it is horizontal, it doesn’t give much room between fights. That said, Wing Smash ends up being faster because you can use it in the air.

Mist Form is surprising to me, because it’s fantastic at what it does, but extremely situational. The thing is, you lose a lot of what makes Alucard work, mobility, in exchange for a long period of invulnerability (which you cannot attack or move during), making it fantastic if you’re fighting a boss and terrible for Stages. You can, of course, just switch your Character Action for bosses, but the Wing Smash is also great for bosses, and that means you’d need to develop two Character Skills instead of one. 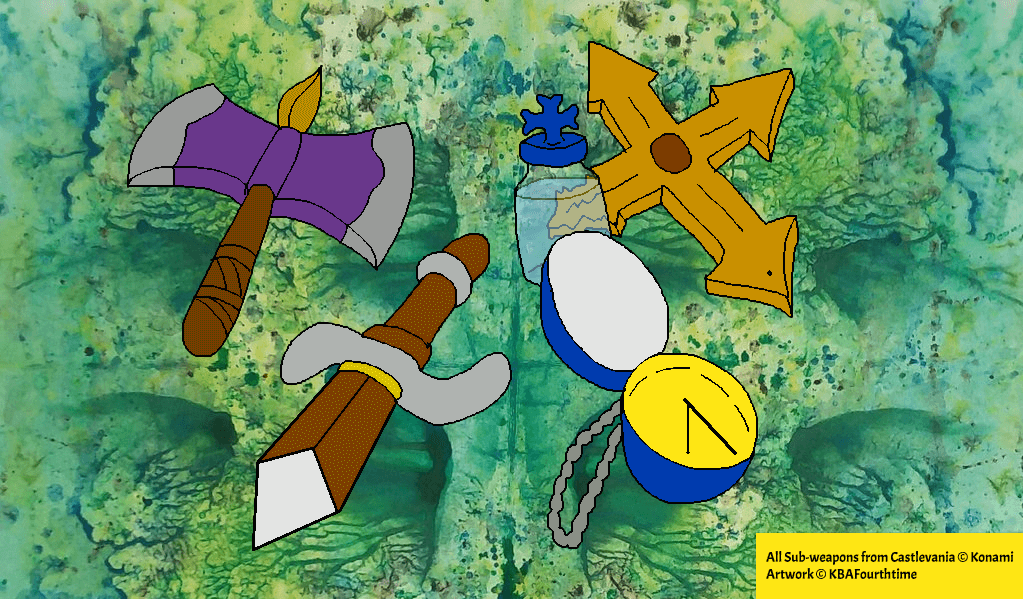 isn’t a bad choice; it works well with his mobile kit and does a lot of burst damage. If you feel you aren’t hitting hard enough, you might find your home here with Dagger A. Compared to Holy Water B, it does much less damage and is less MP efficient, however Dagger A still has fantastic range and speed, making Dagger A the safer option.

does 30% less damage, but where it lacks in damage, it makes up for in spades with its homing capability. Instead of aiming the daggers or needing to be on eye level with the enemy, you instead just throw them and move on with your life, as they automatically track and strike the enemy. They aren’t accurate if the enemy is moving diagonally from you, but this comes up less than you’d imagine, especially since skilled Alucard players tend to work around this. That said, in my opinion, this is the most versatile and effective Sub Weapon, given it’s decent damage, homing, and non-committal animation.

is a quick and hard hitting Sub Weapon that’s basically melee range and does optimal damage at a specific range OR against a large enemy. I’d say this one is pretty weak because it’s grounded and while it does better damage per mana, it has much slower DPS than the daggers.

on the other hand, can be used in air, isn’t situational to only large enemies, and creates an AoE around Alucard, making it easy for him to counter small mobs like bats and ghosts. In addition, it’s even more burst damage than Holy Water A and has similar mana efficiency, making this a good choice if you like to use your Sub Weapon a lot. 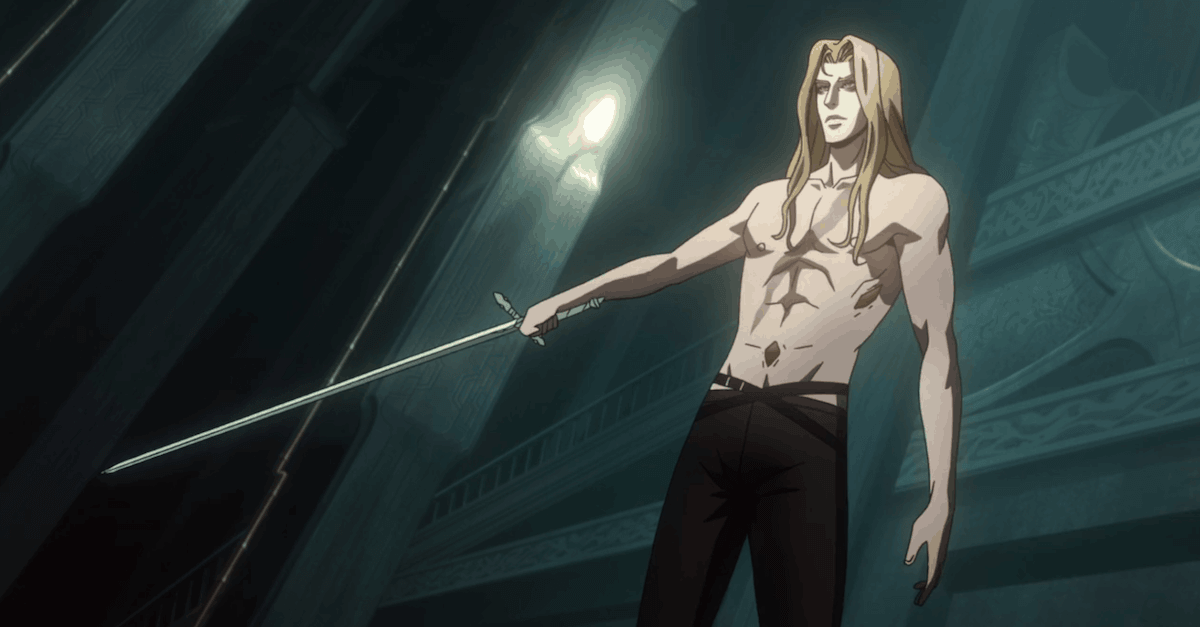 Konami, please give me Netflix Alucard as a costume. I'll pay you.

Alucard’s Weapon Skills, as I said earlier, focus a lot on high burst damage; however, most of them come with the weakness of stopping him in place or putting him in an unfavorable position. Here, we’re going to go over his primary types of Weapon Skill, although hopefully what you’ll take away is how to value your Skills.

Weapon Skills that end in Edge (eg. Blaze Edge) Barrage enemies in slashes in front of Alucard, stopping him in place and doing constant damage in a sort of circular area of effect in front of him. This Skill does one of the highest damage amounts of any in the game, however it’s dangerous because Alucard is stopped in place for an extended period. Be very sure you won’t be punished or killed when using this, meaning make sure you’re facing the right direction and you’re safe from other enemies attacking you. This is especially important with bosses, actually, as they don’t stagger easily and can end up hitting you multiple times while you’re attacking.

Rising Skills, which similarly ends in the keyword, “Rising”, are Alucard’s strongest, and the second highest damaging standard weapon skill in the game. Rising is an extremely powerful tool due to not only its damage, but the fact you fling yourself into the air, potentially dodging attacks if used correctly or putting yourself in a very bad position if using incorrectly. Specifically, putting yourself in a fall animation from using Rising off a cliff is pretty common...at least for me.

Pain Skills don’t do the most damage in the world, in fact being one of Alucard’s weakest, but it comes out the quickest, thus being his safest and easiest to manage attack. Additionally, it hits in a cone starting behind him, making it a very safe area of effect around it. I wouldn’t rely on it as you get stronger, but it’s a good early game skill.

Strike Skills have a hefty wind up, leaving you vulnerable at first, then strikes through the enemy causing average damage. This is one of Alucard’s more interesting skills, as it’s more focused on utility with the ability to dodge like a better Wing Smash and close gaps. While interesting, this again feels more like an early game skill rather than one you should rely on.

Unfortunately, every Weapon using an elemental wave attack has their own phrases, so it’s currently impossible to tell what the keyword actually is, but you do get a weapon with one at the start of the game, so you either know what skill this is or you will soon. This is one of Alucard’s best, because it’s fast, deals a lot of damage, and has a ranged Area of Effect that can wipe out every enemy if used patiently and effectively.