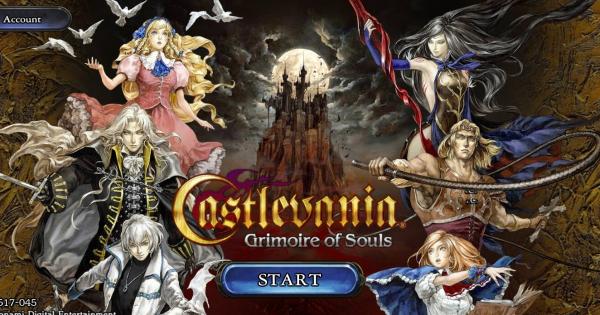 Installing the game is a little tricky, at the moment, because it’s currently only available in Canada. What this means for a lot of Android users is it’s as simple as downloading the Grimoire of Souls APK off of a website (or something like QooApp) or switching their address in the Play Store to a Canadian one.

For iOS users it’s still pretty easy, but affects your Apple ID as a whole. Like with the Google Play Store, you need to change your address to a Canadian one. So, how is this done?

For Android, changing your country in Google Play is really straightforward. Press the top right options menu, go to your account, and under “Country and Profiles”, you can change it to Canada. Of course, if you’d rather not go through that hassle, searching Grimoire of Souls APK will quickly bring you to a site with it, such as apkpure. Be careful, of course, as these can harm your phone if you’re downloading from a less than reputable site.

For iOS, it’s not much harder. First, you want to sign out of your Apple ID at the bottom of the screen. Next, you launch Settings from the Home Screen, go to General, Language & Region, Region, and finally select Canada.

As you play through Quests and raise your Rank, you’ll unlock Trials.

Multiplay is a slightly strange variant of PvP.

A lot of player confusion comes from how the Stats work. While the information is in the game, it’s not in the most available places.

The Equipment system and its finer mechanics aren't immediately understandable. If anything, most of the depth in the game comes from here. Equipment determines most of your passives, skills, and stats. You get three Weapons, five Armors, and one Sub Weapon.

Your Main Weapon is one of your most important equips. It’s the only Weapon which can activate its powerful Equipment Perk. An Equipment Perk is a passive listed within a red box. These passives only activate when you meet the conditions, which you can check by tapping it in the Weapon Information screen.

Sub Weapons are a lot more straightforward. They also affect three stats: Attack, Elemental, and MP, and they have their own Equipment Perk. Just like with Weapons, Attack is increased by leveling and Elemental Damage and your MP Pool are increased with Enchanting. Just to clarify, this increases your maximum MP, NOT the MP Cost of the Sub Weapon. Each Character can equip two categories of Sub Weapons, which is shared between one other Character. Additionally, every Sub Weapon has two forms, called Types.

Sub Weapon Types and What They Do

Finally, we have arguably the most important Equipment type: Armors! So, Armors are the most important Equipment type, in my opinion, because it carries over between ALL characters. Currently, Simon’s Headband and (Maria’s) The Four Guardians are the only Armors that don’t work with other Characters--or I should say their Equipment Perks don’t work with other Characters. That’s right, Armors also have an Equipment Perk, and just like Weapons, only the main Armor’s Perk activates. Armor affects Defense, HP, and Elemental Resistances. Just like with Weapons, Defense is increased with level, and HP and Elemental Resistances are increased with Enchantments. Again, just like with Weapons, your Elemental on your support Armors also affects your total Elemental Resistances, so equipping as much of the same Element as possible is beneficial.

Most new players are a little confused on what to pull for first with their precious starting gems. After all, there’s three options and it’s easy to make a false assumption and waste them. The first thing you want is Weapons, because you’ll never beat a level if you only deal 1 damage. Fire and Holy are the main elements you want, because you need those for later, tougher bosses.
After you have your 4* Weapon, and hopefully a holy and fire Weapon of any rarity, the next thing you’ll want to pull for is Armor. You should want to get at least one 5* Armor and a full set of 4*s asides, which hopefully won’t take you many Gems because the odds are great! After you have your Weapon and your full set of Armors, you can start thinking about Sub Weapons. Although, you don’t have to. You could always go back to pulling for Weapons depending on your preference or how much you feel your character needs a Sub Weapon.
Typically, the best Sub Weapons are: Dagger Type B, Holy Water Type B, Cross Type B, Cat Type A, and Gun Type B. I should clarify that while these are the best mechanically, sometimes it’s better to equip the other types because of their Equipment Perks.

One of the best ways to increase an Equipment’s effectiveness. Limit Breaking requires you to have 100 parchments of the same Equipment you’re using it on. Example: If I want to Limit Break my Scimitar, I need 100 Scimitar Parchments. When you Limit Break a piece of Equipment, you raise its maximum Level, Enchantment Level, and advance to the next Limit Step. If the Limit Step you’re advancing to shows a passive, you’ll get that passive permanently added to it. This means a 3* that’s fully Limit Broken, with all of these bonuses considered, is stronger than a 5* base. So, we know what it does, but what about how? The most common way to collect parchments is through summoning a duplicate Equipment from the Gacha, which gives 100 parchments of the Equipment that would’ve been summoned. The next most common way is from Quests. Quests tend to give a lot of parchments, with higher rarities also being rarer. Not only do they give parchments for Equipment you may already own, they also give unique parchments that you can only get from Quests currently, so definitely take a minute to check the 5* pieces in drop tables, maybe you’ll want it!

This is a lot easier to explain. Your Main Weapon should match the Stage Element. If it does, you gain the effects of that Element’s bonuses. For instance, if you have a fire weapon and 1,000 Fire and 500 Dark and the Stage Element is Fire, you gain the effects of the 1,000 Fire. This is honestly a must for later stages, as the differences become almost insurmountable. Fear not! Not only is it fairly easy to get one of every Element through the gacha system. However, even if you get unlucky, you can still farm fort the appropriate gear from other stages, as detailed in Limit Breaking. You get six loadouts, which is exactly enough for one loadout that’s pure damage and five elemental builds. You want the pure damage loadout for missions that don’t have a Stage Element, such as Trials and Bounty Hunt.

One of the most effective ways to bring your build to the next level is by appropriately utilizing your Equipment Perks. If you remember from before, Support Weapons and Support Armors provide the exact same stats as a Main Weapon or Main Armor; the only exception being for determining your Element. What that means is you could have your shiny 5* Weapon set to Support as a more synergistic Weapon is set to Main for its Equipment Perk. While Equipment Perks are extremely beneficial, do not sacrifice a fully functioning and suited build for it. What I mean by that is if you need to unequip a Weapon or Sub Weapon you love using and feel comfortable with using just to get slightly higher stats, don’t do it. Prioritize making a build you love using over the statistically best possible. For instance, all of my Alucard loadouts use Dagger Type B Sub Weapon because I’m most comfortable with that Sub Weapon.

Finally, gacha games are always more fun and easier to learn with a community, so you should drop by the Grimoire of Souls discord at https://discord.gg/sYu3WXP!