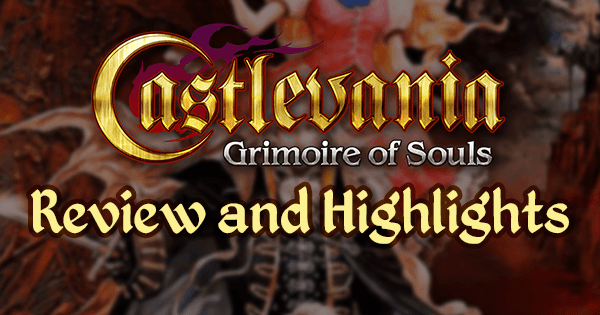 Castlevania is a storied franchise. As one of the most popular and iconic long-running series in the world, it has a great deal of history. One of the best parts of playing through new games in the series is seeing them delve into the rich lore of the franchise and all the call-backs, references, and general nods to the past works in the series. Being able to experience so many chapters of the story of protagonists from the Belmont family (and other friends, sometimes - we love you Alucard, Shanoa, and Soma) in their quest against Dracula really lends the Castlevania series a weight that many modern competing games in the Metroidvania genre can’t match, even if their gameplay might be similarly stellar.

It’s true that, like many other fans, I was somewhat dismayed about the announcement of Castlevania: Grimoire of Souls as a mobile game instead of a full-fledged new entry of the franchise. At the time of the game’s initial announcement in April 2018, it had been nearly a full 4 years without any word of a new mainline Castlevania entry after 2014’s Lords of Shadow 2. Despite knowing that longtime series veteran Koji ‘IGA’ Igarashi would no longer be producing any games, having left Konami to eventually cofound Artplay, Castlevania fans were practically salivating over every crumb of news, every speck of a rumor. Then we were told that the next installment in the series would be coming to Android and iOS. Predictably, people were less than pleased, to put it lightly.

Now, almost a year and a half later, a lot of that resentment has turned into resignation, especially with IGA’s work on Bloodstained: Ritual of the Night available to quench some of the thirst for more vampire-killing action. But honestly, Grimoire of Souls deserves better than that sheer resignation. Beneath the immediate repulsion of ‘oh no, another cash grab gacha game’ is a game with a lot of love for the series clearly baked into it. As a longtime Castlevania fan, I’ve found myself appreciating a great deal about Grimoire of Souls, and I want to break down some of the elements that make me feel that way.

Likely due to the difficulty of adapting the genre to fit mobile gameplay with microtransactions, Grimoire doesn’t follow the now-iconic Metroidvania formula of Castlevania in the post Symphony of the Night era. Instead of nonlinear gameplay across an expanding map, you fight through a series of self-contained platforming levels, with several levels bundled together to form one grimoire at a time as part of the framing mechanism of the game. The emphasis is on combat, with minor platforming elements. It’s sort of like taking Classicvania games like the original Castlevania or Curse of Dracula and adding the mobility of the series' modern protagonists, even down to little callbacks like health-restoring food being stored in breakable walls!

Characters are unlocked through story progression, with the currently available roster being Alucard, Simon Belmont, Maria Renard, Charlotte Aulin, and Shanoa. Each character wields a different type of main weapon (obtained through drops or the gacha), two kinds of sub weapons (each category of sub weapon having two ‘types’ of effects), and several pieces of armor (available to all characters equally). Last but not least, as you progress, characters from the series like Jonathan Morris and Richter Belmont are unlocked as ‘Alter Arts’, allowing them to perform a super move to assist you a limited number of times per stage.

Every character plays and feels completely different, really making it feel as though you’re tailoring your playstyle to your chosen character and not just several more-or-less clones

Iconic sub weapons from the series are not only well represented, but also fun to experiment with: 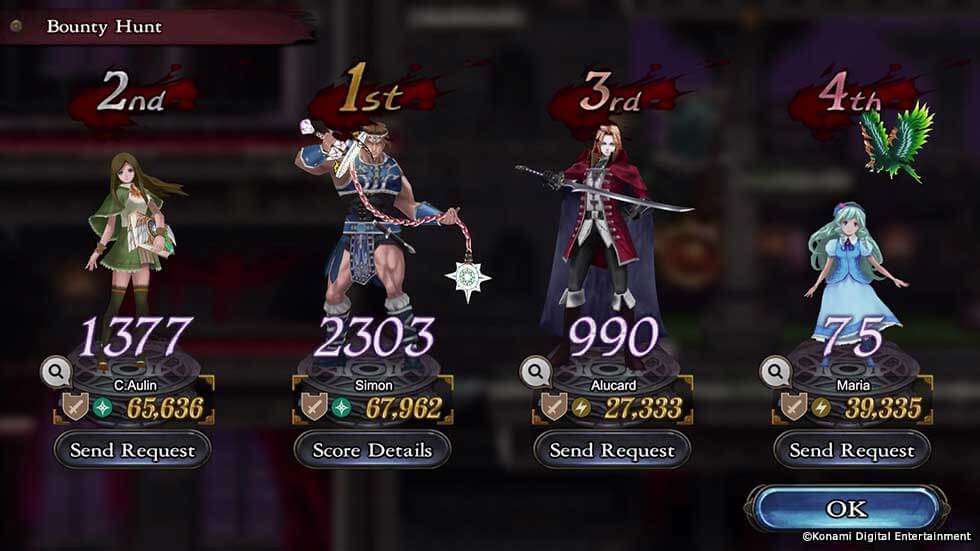 Sometimes it's cool to get decent rewards even if you get outscored about thirty times over.

As you might be able to tell from my rambling thus far, I am a huge fan of the series, and generally love diving into the lore. I did not come in expecting to enjoy the writing of Grimoire at all, having been taught over the years that any time a series I like gets a crossover game, it usually comes at the expense of anything resembling good writing or characterization. Now, admittedly, Grimoire still doesn’t have a whopping amount of meat on its bones in that direction, but there’s more than enough to tickle my fancy.

The main story is somewhat vague and a little bland, as most gacha game entries in popular series tend to be, but is still surprisingly enjoyable, especially as your cast of characters grows through story progression. The real enjoyment, for me, is seeing the crossover nature of the game put to good use. The conversations between Simon and the other, younger characters as he tries to wrap his head around his reputation as the most legendary of the Belmonts and their admiration of him. Alucard reminiscing about the multiple Belmonts he’s met and considered friends while talking to their descendants or allies. Even unrelated characters like Charlotte and Shanoa get to talk, as Charlotte seeks Shanoa’s advice on how to be taken more seriously as a woman and not a child.

It’s all the kind of stuff you would have daydreamed about in crossovers of your favorite characters, and seeing it actualized is some wonderful fanservice. It remains to be seen how long the game can keep providing this sort of wish granting, but with more characters almost certainly on the way (come home already, Soma) theoretically we could keep getting this juicy content, and I’m completely on board for it.

The Gacha: Nothing to Fear

Aside from the general fear that mobile games are watered down and not worthy of being a replacement to a ‘real’ installment in a game series, the more specific fear that fans probably have when it comes to mobile games is predatory gacha practices. In many games it feels nigh-impossible, if not just straight up impossible, to keep up as an F2P or light spender even against dolphins (moderate spenders), let alone whales. Thankfully, for multiple reasons, Grimoire doesn’t feel too bad in this regard and I haven’t felt pressured to spend a cent on the game - I simply don’t have to do so in order to fully enjoy it. Here’s why that’s the case:

The gacha only provides gear, not characters

Congratulations on surviving to make it this far past all my excited gushing over this game. If you, like me, are a longtime Castlevania fan but decided to not touch Grimoire of Souls purely due to its status as a mobile game, I urge you to reconsider. And if you’re a newcomer to the series that wants to see what the fuss is about, give it a try! You’ll certainly get the general feeling of the series at its core, in all its finest gothic tone. I didn't even get into this due to already having so much to talk about, but the art style and music of the game (which consists of remixes of classic series tunes) are both fantastically faithful to the series at large.

While we wait and hope that the series gets another mainline console game down the line, Grimoire will certainly be a good companion until then, and I hope to see it flourish upon its global release. Until then, you can find the game on the Canadian App Store and Play Store during its soft launch. Certain other sources Quite Often Obtain Additional ways to get the game, Perhaps People outside of Canada who want to play the game might check there.