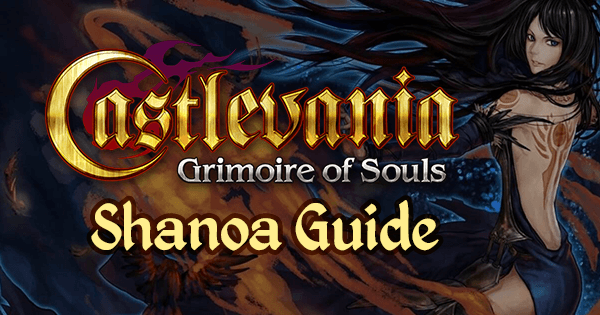 Obviously, the iconic characters are at the heart of Grimoire of Souls and bring the weight of Castlevania lore and nostalgia with them. All the characters have a lot of different and unique traits which set them apart from each other, but this makes it hard to digest exactly what each character does. So, I’m going to first go through what those traits are and how you should read them, then I’m going to dive into the characters themselves and break them down for you.

Today, we’ll be taking a look at the second character on the list, and another fan favorite: Shanoa [Redacted]!

Some may consider this a hot take. Which is fine. Shanoa looked great in Ecclesia, but she looks a lot better and more elegant in Grimoire of Souls. Honestly, it’s surprising to me they managed to make such a fantastic design better, and that’s true for a lot of the designs in Grimoire of Souls, to be honest. It’s clear to me that Konami has some VERY talented artists working there!

Shanoa is, without a doubt, an aerial fighter. You’ll notice almost immediately that her grounded attacks are slower than her aerials and tend to have less coverage, especially if you’re using her best moveset, the scythe. With Shanoa, your main focus should be to practice staying off the ground for as long as possible and keep a bead on your opponents. Her main weakness is low damage output, especially in the early game, so if you feel like you aren’t doing enough damage, that’s normal. Unfortunately, this doesn’t change until you begin diving into either Bounty Hunt or Astral Atrament, so as a Shanoa main, you might want to suffer through being too underleveled for Bounty Hunt just to get her fantastic Anubis Rod.

We’re starting with Magnes, which has to be learned, and once you do, you use it by holding the jump button and directing it with the left hand screen. It’s difficult to master since it launches it forward and acts a little wonky with collision, but getting used to it is required to play Shanoa. Some important rules to keep in mind is
1) for the first half, you will launch forward in a straight line.
2) You can stop your Magnes using an Attack, Character Skill, Weapon Skill, or Sub Weapon. This means mid-flight, unfortunately you can’t stop Magnes while in the bubble.
3) If you let go of the jump button, even without manually directly Magnes, it’ll still fire you in the direction the arrow is pointing, so make sure to direct it and stop yourself directly after.

I think most people gravitate towards this one because it just feels SO GOOD to use, but it really isn’t all that effective until you really master Shanoa. Flante Sagitta launches Shanoa into the air, where she then fires a homing arrow that tracks the nearest target and blows them up--yes, BLOWS THEM UP. They’re flung into the air, where you can combo them to your heart’s content. Although the primary purpose is actually giving you a third jump and allowing you to restart your air combo, making this one of the best Character Skills in the game, but difficult to use for new players.

Next up is Stella which is actually a really solid skill for keeping Shanoa in the air. She dropkicks onto the enemy, which then launches her back up, and in some situations, especially in alcoves and against low level or grounded enemies, it’s extremely effective. Honestly, this is a great pick for a character like Shanoa!

Last but not least, we have Velox! Not only does this improve her already remarkable air mobility by offering tons of horizontal air movement, but if you have somehow found yourself on the ground, this will lift you barely into the air, turning your combo into aerial. In other words, where Stella only makes her anti ground game strong, Velox makes her anti ground game strong, gives her more mobility, and gives her training wheels for the less experienced.

In my opinion, the order of power goes Velox and Flante Sagitta being fantastic in their own ways while Stella trails just a little behind, but still strong. While Flante Sagitta is better for the more serious player, it won’t be as good as Velox for players that aren’t particularly skilled with combos and keeping up long strings of actions. Especially if you’re using mobile controls over a controller, it could be frustrating trying to make use of Sagitta. With whichever one you choose, though, they’re both absolutely fantastic and serve their purpose well. As for Stella? It’s pretty good. It’s immediate use is more accurate controls with Magnes, since it stops you dead. The other Character Skills will still let you end Magnes early, but Flante Sagitta carries momentum with it and Velox still launches you forward as normal, so it’s not quite the same. In my opinion, that isn’t enough to recommend Stella over Velox or Sagitta, though.

While Cat Type A does poor damage, it’s a decent anti ground, especially since it’s attached to Shanoa. It covers her weaknesses, but it doesn’t work at all against aerial enemies, so this one is a very preferential choice.

Cat Type B, on the other hand, is a waste of MP. It acts as a trap that attacks enemies that come too close, dealing roughly twice as much damage to a single enemy as Cat Type A, meaning it still does very poor damage, but now as melee range and only single target. Honestly, I don’t know when you’d ever use this. It’s probably the worst Sub Weapon in the game.

Gun Type A is when things start looking up. Even though Sub Weapons normally act pretty uniform depending on their type, Type A Guns are very different. Some are long range rifles, or multishot pistols, or even shotguns. For this reason, it’s difficult to talk about them, so I’ll rely on generalizations. They do high damage for high mp cost. The ranged ones tend to have high range and the spread ones, such as shotguns, are great for taking out multiple enemies.

Gun Type B, otherwise known as cannons, fires in an arc and deals HEAVY damage for a massive MP cost, possibly the highest of any Sub Weapon in the game, on both counts, and it strikes in a huge Area of Effect. It’s a little unwieldy and difficult to use at first, but without a doubt in my mind this is her best Sub Weapon, as it can wipe out groups of enemies and even bosses in a single shot. That being said, it’s debatable if Gun Type A or B is better, especially with the varying types, all that matters here is you use what you feel most comfortable with. Moving on, it does roughly as much as a lot of her Weapon Skills. However, for as much as I’m hyping it up, there's a major downside: currently, the only Type B Guns are 5* and gacha only.

Blast or Kamehameha? You be the judge.

Impact works in the air, which is a plus, although it only strikes the ground. Even though you can’t effectively use this against aerial units, it’s still a decent Weapon Skill for her as it at least lets her act as a sort of B2 Bomber. That said, the damage is above average, but only if you take all of the hits, which is over the course of several seconds on a stationary hitbox. While this does work against more stationary bosses, it’s ineffective against mobile and aerial bosses, which are becoming more common.

The damage here is decent and you charge forward, then strike many times, ending with knocking the enemy down. This is one of her better Weapon Skills, but still pretty average when compared to other characters.

She rises upward, either sending her into the air or higher into the air, which is great for her! As she rises, she slashes around her, striking enemies for high burst damage, making this her best standard skill as it repositions her favorably and does great damage.

Deals the same damage as just walking up and attacking them, except it forces you to hang in the air and fire a diagonal beam for roughly 3-5 seconds. While this is a very cool looking Weapon Skill, it will also do a lot more harm than good.

Currently, the only three weapons with this skill happen to all have different tiers of Dawn Lightning. Presumably, this means the keyword is Dawn, but who knows? Regardless, Dawn acts like Acerbatus from her game, firing a large circle forward which has a lot of speed but quickly loses momentum before stopping in place. It deals medium to high damage, except for the 5* version, but even then it’s completely outdone by Shanoa’s unique Weapon Skills, such as Anubis Rod’s “Hound Spear”. That said, it’s worth noting this is the strongest of the standard Weapon Skills, assuming all attacks hit!

I’d like to start by saying Tonitrus, from Deus Tonitrus, and Hound Spear, from Anubis Rod, FAR outclass all of the standard weapon skills we’ve looked at so far. They are in a league of their own and everything I say here is a comparison to other top tier weapons.

We’ll start with the easier of the two to get, and arguably the better, Anubis Rod. Its skill, Hound Spear, unleashes several bullets that zig zag around before striking the nearest enemies on screen. When I say nearest, I mean to the bullets. This tends to do one of one things: completely clear the screen of all enemies and bosses. Its damage is outstanding--even when split up it tends to hit really hard.
Next, Tonitrus, or as I personally know it, Vol Fulgar from Order of Ecclesia. Tonitrus will hunt down and deal heavy damage to two of anything that can be hit--whether that’s right in your face or a mile away. “Anything” can be an enemy, boss, or an object like a thrown axe. As you might’ve guessed, that makes this incredibly powerful and incredibly unwieldy. A master can do wonderful and horrifying things with this skill, so don’t give up on it or discount it merely because its targeting is hard to get used to, though.

Shanoa is an amazing character with a lot of strengths. Honestly, I went into this thinking she was a versatile character, and came out realizing she’s extremely limited. She is powerful, true, but you really don’t have as many options as you would with other characters. Her “best in slot” is a lot more weighty than others. With other characters, you can use the second best, third best, or fourth best as long as you’re comfortable and skilled with it--but not Shanoa. Shanoa needs her best gear to really shine. Like a fighting game character, you’re expected to master her incredibly nuanced and technical attack chains.

This isn’t a bad thing, it’s just different, and it’s best you know that now rather than find out later. With that said, her best in slot is almost entirely achievable through the sweat of your brow and the vigor of your youth, so don’t lose hope! Farm that Bounty Hunt, farm those parchments, and stick to it. In the end, you’ll have a powerful fighter! 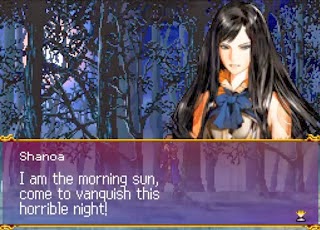