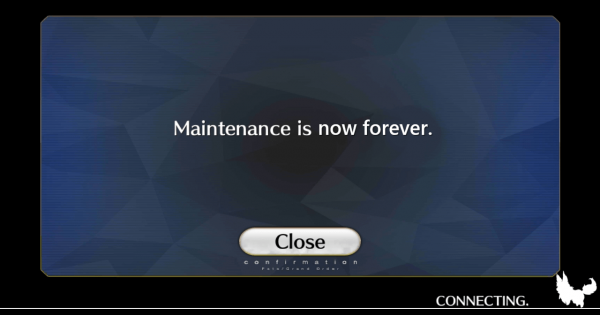 In the 871 days since June 25, 2017, when Fate/Grand Order first released its Global/English version, there have been server downtimes, there have been connection issues, and of course players have dealt with the trivial and irritating interruption of real life now and then. However, the bravest and boldest few have always managed to squeak in a login every day before the daily server reset, whether that meant waking up at 3 AM or excusing oneself from a work meeting to 'go to the bathroom', despite the windows of opportunity to do so sometimes being as short as 2 hours in the middle of the night.

In fact, having an unbroken series of logins from the very first day of the server (colloquially known as a 'day 1 streak') is sometimes considered a sort of badge of honor by veterans. The subset of players who'd managed to hold onto that achievement tended to take a good deal of personal pride in it... But everything changed when the fire na- when the Christmas 2018 Revival Lite event began.

Standard server maintenance before an event takes anywhere between 2 to 6 hours. Yet when players attempted to log in, they were met with everyone's least favorite message: extended maintenance. Over the course of Nov. 12, players began to get more and more nervous as the messages continued to update with later and later times until eventually just announcing the end time for maintenance as 'TBD'.

The previous longest-ever maintenance was a nerve-wracking 21 hours in Sep. 2018, which spawned a colossal amount of bizarre memes, like a running joke about drawing Servants longer and longer as the maintenance wore on that persists to this day. But last night at 8 PM PDT, the unthinkable happened as the maintenance hit a full 24 hours. Every login streak in FGO Global went kaput. Players with day 1 streaks who managed to log in and continued to hope beyond hope that some miracle would save them were met by the cold truth.

Even worse, the interrupted logins came during the 8 Million Downloads Campaign, denying players one or more login rewards, including a whopping 10 free Summon Tickets, among other things. Therefore, players lost cumulative login streaks, weekly login streaks, an event login streak and the pursuant rewards, and a full day of event farming (which is relevant for many players due to Revival events being on a much shorter schedule than standard events).

Normally, server maintenance comes with compensation for the downtime to begin with. But extended or unexpected maintenance brings a larger reward most of the time, and this time wasn't an exception. A large amount of in-game premium currency and energy refill items was handed out to all players, and compensation for the lost event rewards was also promised.

However, the responses to the promised compensation were... mixed, to say the least. While almost all players were thankful that at least compensation was forthcoming, there were many different reactions. From players who were more than happy about the maintenance due to the influx of Saint Quartz, to those insistent that the compensation should have been greater, to the unhappy day 1 streak players who would gladly return the rewards in exchange for an intact streak. And of course, there were the people making memes reveling in the chaos as usual.

"At least we get something out of it!"

As well as a subset who are merely befuddled by the attachment to the login streak shown by some players:

Note that some of these are probably tongue-in-cheek, but... you never know.

She will be able to reach the Aurora if the maintenance keep extending. from r/grandorder

Hope everyone gets his 10 tickets! from r/grandorder

As a day 1 player with a now-broken streak, I personally am fine with the quartz. Rolls don't buy themselves! What about you? Feel free to let us know below or at our FGO Community what you think of the whole shebang! 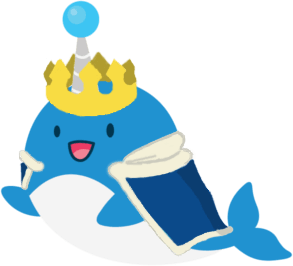