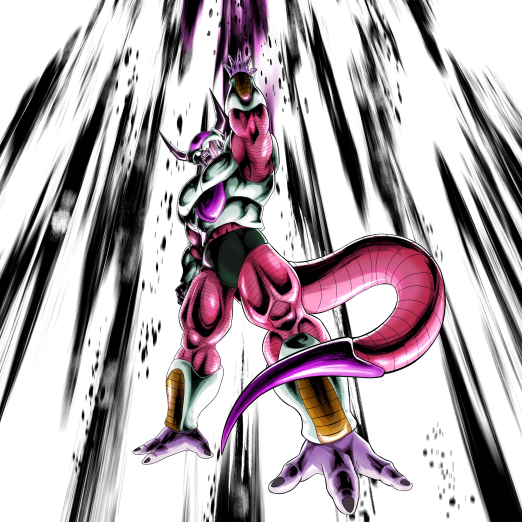 EX 2nd Form Frieza YEL enters the scene as a powerful Lineage of Evil Extreme Fighter with a number of tricks up his sleeve. The Sadistic Emperor functions as a late-bloomer in Combat, gaining significant permanent Buffs after 20 timer counts.

He also specializes in spreading Debuffs whenever his opponents flee the battlefield. EX 2nd Form Frieza YEL benefits his family with an incredible Z-Ability off the battlefield, giving them Buffs to both of their Offensive stats.

EX 2nd Form Frieza YEL is a terror on the battlefield after 20 seconds have gone by. By that point, his Main Ability will be active, giving him the capability to greatly increase his Damage and inflict 5 Substitution counts on all his enemies on command.

This Ability is stronger than it lets on, as it essentially locks his enemy in with him for at least 5 Timer Counts.

The Terrifying Tyrant’s most incredible contribution to his main Team is his Z-Ability. A boost to both Offensive stats is enough to secure him a spot perennially on Lineage of Evil benches.

EX 2nd Form Frieza YEL requires time to unlock his true potential, unfortunately making him a subpar battle member for the first 20 Counts of combat. The lack of flexibility inherent to his playstyle makes is inclusion on main Lineage of Evil cores a tough sell.

This is where EX 2nd Form Frieza YEL belongs; buffing the members of his family fantastically at 5 Stars. At that point, the 2nd form of the Emperor of the Universe becomes an optimal bench inclusion.

Even on the core of the Team, EX 2nd Form Frieza YEL can perform well when paired with many of the Tag's Support Fighters.

A must have for any Extreme Yellow Fighter.

He’s a good replacement for SP FF FP Frieza YEL on the core, and has a double Offensive Z-Ability at 5 stars for Lineage of Evil, at the very least making him a very good bench option for quite a while.