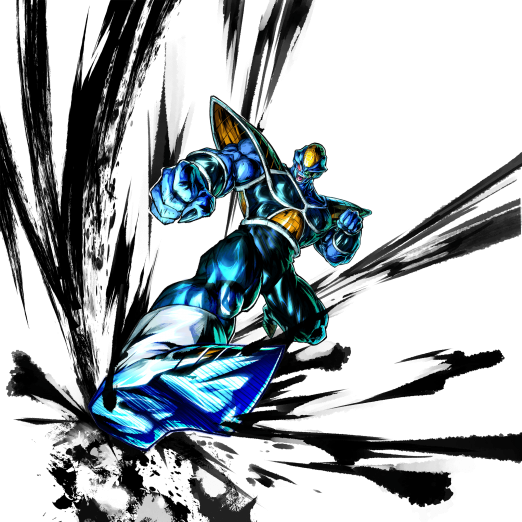 EX Burter YEL bursts onto the scene from the Ginyu Force Training Event with a toolkit that lends credibility to his claim of being the fastest in the universe. EX Burter YEL excels at Strike based combat and swiftly dances across the battlefield, evading enemy attacks and recovering his Vanishing Gauge in record time.

He was once part of the Core for Frieza Force, however SP FP Frieza YEL replaced him completely. That being said, with the incredible power of the unique Support provided by SP 1st Form Frieza PUR, he's got the potential to shine on this Team.

Because of their synergy, he's a solid option on this Tag Team, or as a part of a Ginyu Force Team. On a Ginyu Force Team, Burter is an absolute menace who can steamroll through any Fighter with the raw power of his Special Move Arts.

EX Burter YEL is at his best when the match begins, gaining a 15% boost to his Strike Damage and a -5 flat cost reduction for his Special Move for each Ginyu Force Battle Member, including himself. This gives him the ability to string together deceptively long combos, ending with his trademark Mach Kick for massive damage.

Burter's Extra Arts Card only reinforces this playstyle, as it increases both his Strike Damage and his Ki Recovery.

An Elite for Elites

EX Burter YEL’s defining feature is his Vanish Gauge recovery potential. His Special Move restores it by a flat 40% on it and his Main Ability grants him a 50% Vanishing Gauge Recovery buff for 10 Timer Counts - meaning that with careful play and prediction, the Blue Hurricane can safely regain his Vanish multiple times while out on the field.

Being both a Ginyu Force Member and an Extreme Fighter grants Burter access to a fantastic selection of Offensive and Defensive Equips. This absurd

A Team Player to a Fault

EX Burter YEL requires 3 living Frieza Force allies to gain his maximum Strike Damage buff on entrance to the battlefield. While this does include himself, it means that Burter struggles when his comrades start dropping, resulting in mediocre late-game damage. His Damage is never awful, but it's middling in Crisis scenarios.

EX Burter YEL is an instrumental part of the Ginyu Force team, being its strongest Yellow fighter by far. Burter provides his allies with a boost to Strike Attack and Defense with his Z ability at 5 stars and beyond, keeping him relevant on all Strike-focused team builds of this Tag. With the Support of Fighters like EX Captain Ginyu PUR, Burter can dish out exceptional Damage.

The Defensive power of EX Recoome BLU supplements Burter's lack of bulk and can shut down enemy Reds that might pose a problem for the self-proclaimed Fastest in the Universe.

SP Final Form Full Power Frieza YEL might have overtaken him as a Core character on most Frieza Force Team builds, but the incredible Support power of SP 1st Form Frieza PUR allows Burter to annihilate foes with a consistent stream of Special Move Arts cards. Their synergy keeps Burter relevant on this Tag.

EX Recoome BLU or SP 1st Form Frieza BLU can fill out the rest of this excellent squad. Recoome provides additional Defense while the pod-ridden emperor competes with Burter for the multitude of Special Arts Cards in the deck.

He even provides a nice boost to both Strike Attack and Defense, which is a great Buff combo for the Tag.

He's very heavily Strike-based, so this is excellent. Blue Hurricane! Gives Blast Attack which is not great because EX Burter YEL is a Melee Fighter, but can be used if the Health and Vanish Gauge Recovery is wanted.

On release, EX Burter YEL had one of the most devastating Special Moves this game has ever seen, but he and his Team have simply fallen a bit behind the Meta.