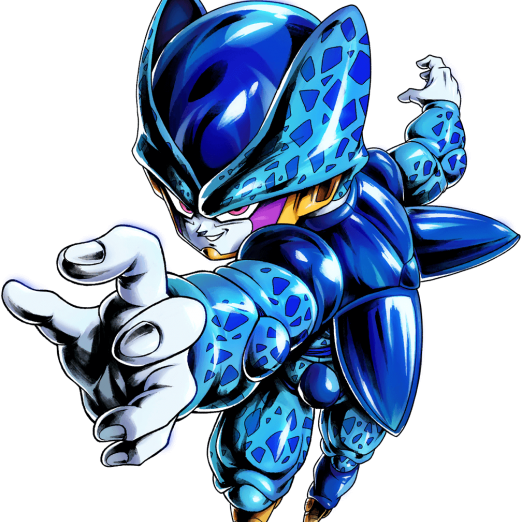 Nominated cutest bug baby to exist for the express purpose of being cannon-fodder, EX Cell Jr YEL is far more valuable than his HE counterpart and might just make his father proud.

This Fighter suffers from some poor Battle Style and held Arts Card choices but otherwise, he has exceptional power and Synergy within the Android Tag.

With a toolkit of Enemy debuffs an Android Boosting Z-Ability, EX Cell Jr YEL has a place bench, even if his stats have been power crept past core viability.

This Fighters stats were pretty good for an EX Rarity at the time of release--especially his Strike Attack.

Fortunately, despite being classified as a Ranged Fighter, EX Cell Jr YEL’s Blast-related Buffs are actually Enemy Debuffs, so they benefit the Team as a whole and makes this defect a little more forgivable.

In a Team willing to work around him, EX Cell Jr YEL can do a good amount of Damage.

With an Android Tagged Z-Ability and an almost exclusively Enemy debuffing toolkit, EX Cell Jr YEL makes a pretty good argument for putting him in the core line-up rather than limiting him to the bench.

He works particularly well alongside Cell variants with SP PF Cell RED as the obvious first choice, since their toolkits are so complimentary.

Even with so many positive things to say, the elephant in the room cannot be ignored; if not for the one good Strike stat, everything about EX Cell Jr YEL would fit the archetype of a Ranged Fighter.

No matter how well he and SP PF Cell RED compliment each other, they both have Blast Held Arts Cards and this further limits the options for the third Fighter.

If EX Cell Jr YEL just had Strike Cards instead of Blast, all this would be forgiven since his toolkit binds him to a high ranking SP Fighter but sadly this is not the case.

While his Health is still about average and due to this Fighters age, his Defenses are simply not up to par anymore. He cannot afford to be on the receiving end of any kind of Damage.

Contradictory toolkit aside, this is still a valuable Fighter overall. Pair him up with SP PF Cell RED and SP Android #16 GRN and his defects all but disappear and he becomes the third in a highly effective Team.

A must-have on any Android Melee Fighter due to the Strike Attack and extra Damage to Super Saiyans.

EX Cell Jr YEL’s stats are power crept, and his toolkit conflict with his held Arts Cards and Fighting style. An overreliance on Cell Fighters, bad stats and a bad Z-Ability have made him almost impossible to bring into a Match.